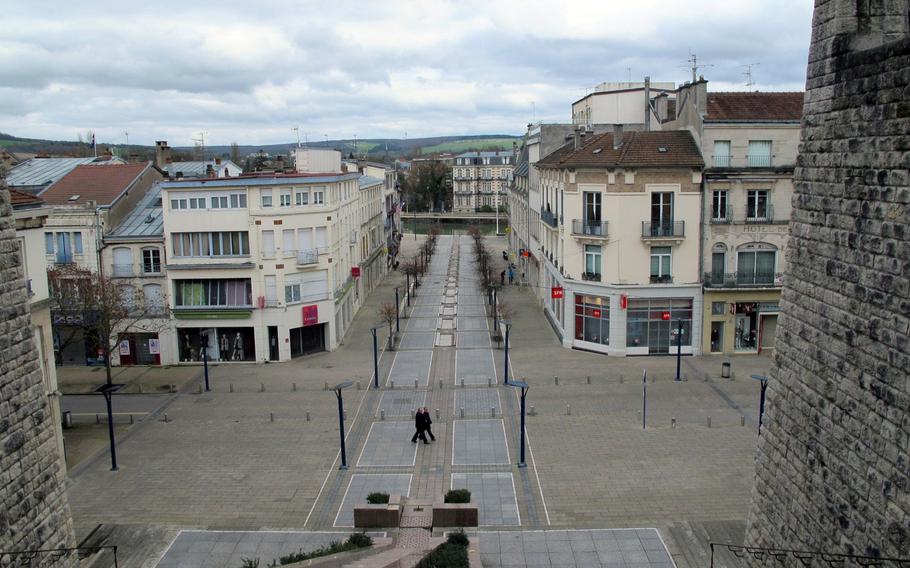 Buy Photo
View of central Verdun, France, with the Meuse River in the background, taken from the town's central monument to the epic battle in 1916. (Slobodan Lekic/Stars and Stripes)

Buy Photo
View of central Verdun, France, with the Meuse River in the background, taken from the town's central monument to the epic battle in 1916. (Slobodan Lekic/Stars and Stripes) Buy Photo
Monument in central Verdun, France, to the epic World War I battle in which about one million French and German soldiers were killed or wounded. (Slobodan Lekic/Stars and Stripes) Buy Photo
The Meuse River winds through Verdun, France. The town was the target of the German offensive in 1916, which resulted in one of the deadliest battles in history. (Slobodan Lekic/Stars and Stripes) Buy Photo
An underground gallery in the massive citadel in Verdun, where French troops sheltered during the epic World War I battle. (Slobodan Lekic/Stars and Stripes) 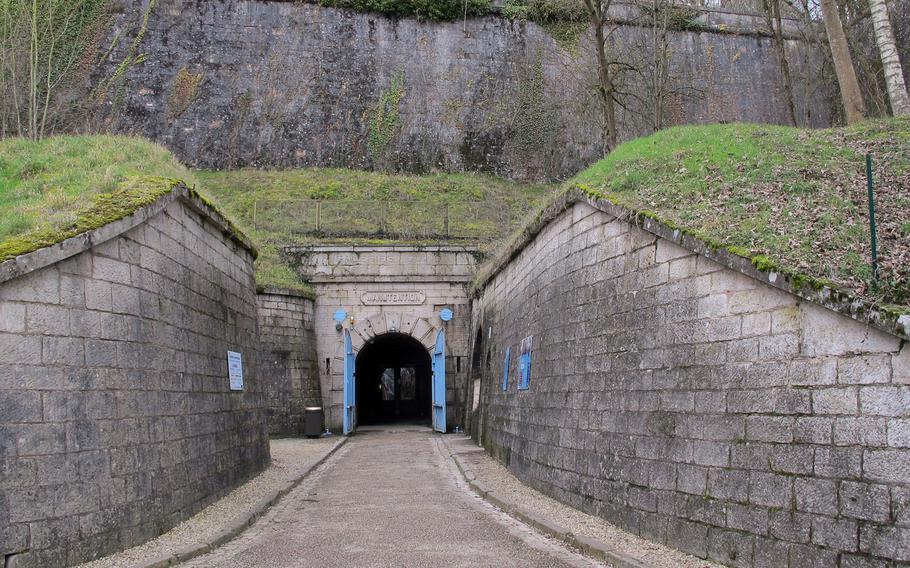 Buy Photo
Entrance to the underground citadel in Verdun, France. The citadel has an electric train available for tours of the galleries. (Slobodan Lekic/Stars and Stripes) 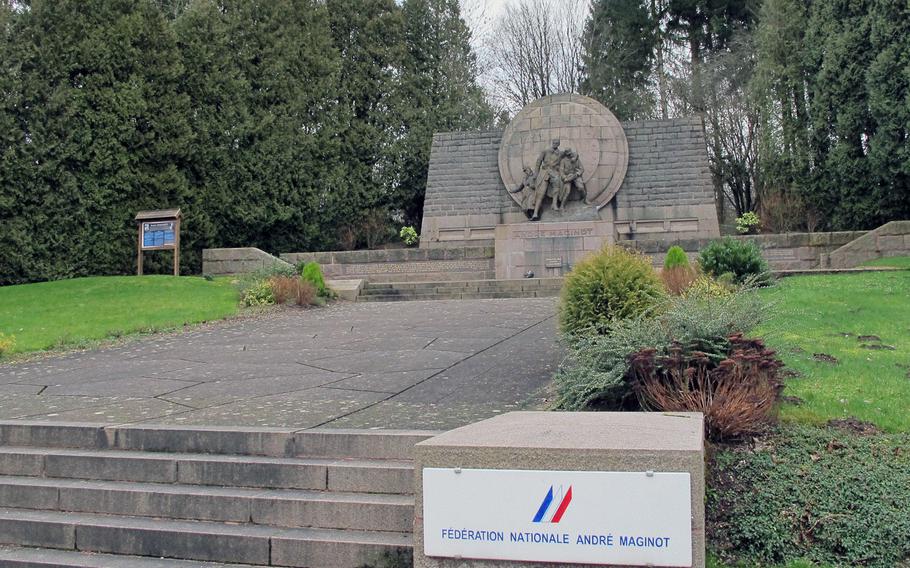 Buy Photo
A memorial to Sgt. Andre Maginot, who was wounded during the Battle of Verdun in 1916. In the early 1930s, Maginot served as France's minister of defense and built the fortress system along the German border that bears his name. (Slobodan Lekic/Stars and Stripes) Buy Photo
The cemetery and ossuary at Verdun, where thousands of French soldiers are buried. About one million troops were either killed or wounded during the epic battle in 1916. (Slobodan Lekic/Stars and Stripes) 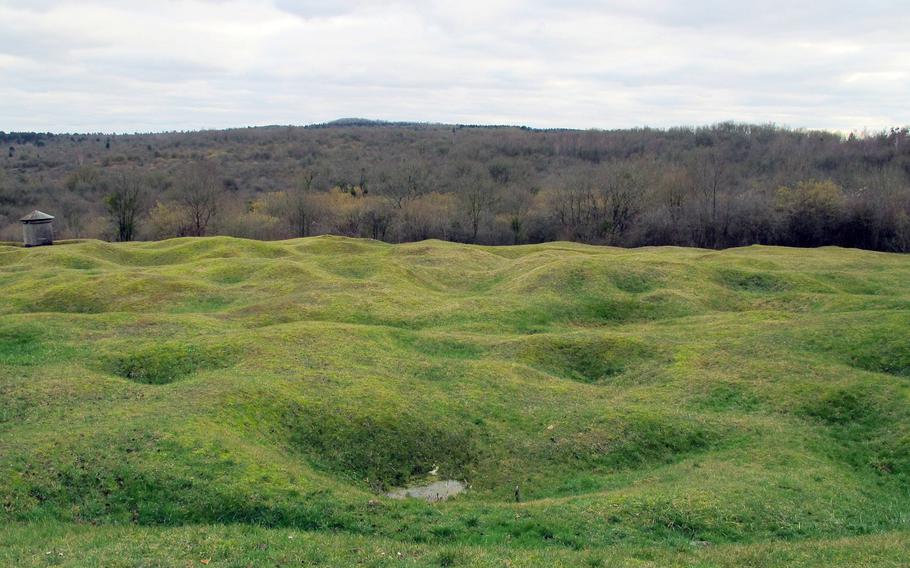 Buy Photo
A clearing in the woods at the battlefield in Verdun, France, still pockmarked by shell craters from the heavy artillery used by both the French and German armies during the 1916 battle. At least 11 million heavy-caliber shells were fired during the 10-month campaign. (Slobodan Lekic/Stars and Stripes) Buy Photo
The ossuary at the center of the Verdun battlefield, containing the bones of tens of thousands of French and German troops killed in the 1916 battle. (Slobodan Lekic/Stars and Stripes) Buy Photo
The Trench of Bayonets, where a company of French soldiers was buried alive by German artillery bombardment. Only the bayonets mounted on their rifles were found sticking above the ground. A monument has been built over the site, which is a war grave. (Slobodan Lekic/Stars and Stripes) 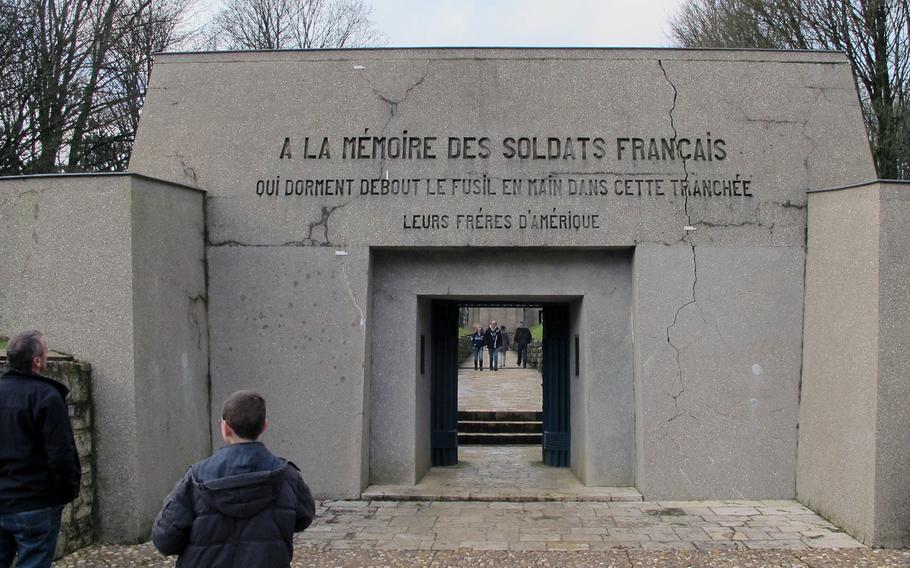 Buy Photo
The entrance to the Trench of Bayonets at the battlefield in Verdun, France. (Slobodan Lekic/Stars and Stripes) Buy Photo
Fort Douaumont, the massive French underground fortress that was occupied by the Germans early in 1916, and which became the centerpiece of the Battle of Verdun. (Slobodan Lekic/Stars and Stripes) 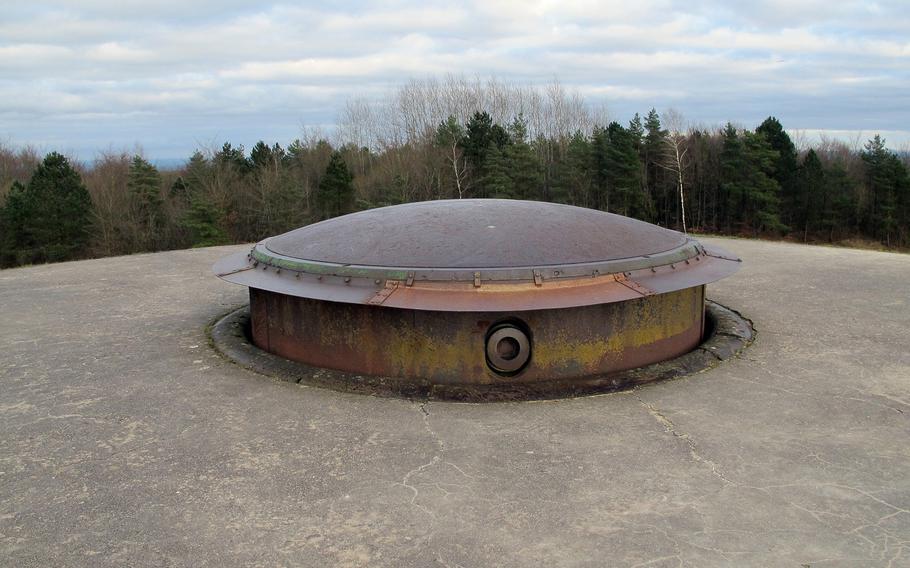 Buy Photo
A retractable steel turret of a 155mm howitzer on top of Fort Douaumont in Verdun, France. (Slobodan Lekic/Stars and Stripes) Buy Photo
The top of Fort Douaumont. The fort remains pockmarked by the craters of tens of thousands of artillery shells fired at it during the bloody Battle of Verdun. (Slobodan Lekic/Stars and Stripes) 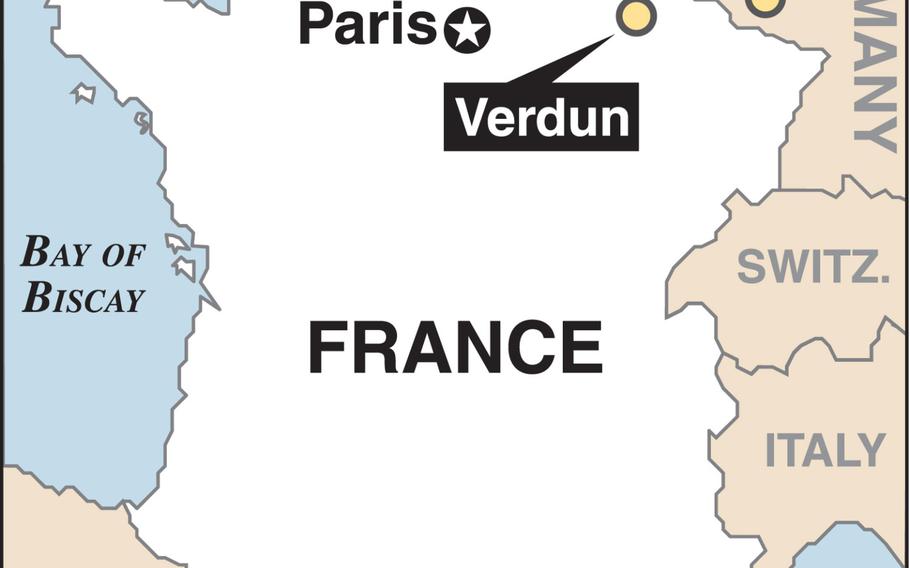 The World War I Battle of Verdun, in which close to 1 million French and German soldiers died or were wounded, is considered one of the bloodiest battles in history.

The epic confrontation in 1916 was the brainchild of Gen. Erich von Falkenhayn, chief of the German General Staff, who wanted to break the deadlock created by trench warfare by drawing his French enemies into a battle of attrition in which they would suffer unacceptably high casualties. According to Falkenhayn’s plan, this would “bleed France white” and compel Paris to sue for peace, thus ending World War I with a German victory.

The plan relied on huge numbers of troops and immense bombardments of French positions by heavy artillery. But within weeks of the start of the campaign in February, 1916, Falkenhayn’s concept began to unravel amid fierce French resistance and constant counterattacks. As the French gathered strength, the tide gradually began to turn, and the battle eventually petered out at the end of 1916.

Despite the almost incomprehensible carnage of the 10-month campaign that came to epitomize the slaughter of World War I-style trench warfare, the struggle ended with almost no territory gained or lost and with the front lines remaining essentially where they were before the start of the German offensive.

Today, the sprawling battlefield in the hills and woods overlooking the meandering Meuse River north of the ancient town of Verdun have largely been preserved and turned into a national monument to the Great War. In summer, thousands of visitors flock to this pleasant, undulating countryside.

The approach to Verdun from the A4 Autoroute leads down the Voie Sacre — the Sacred Way — the only supply route open to the French front commander, Gen. Philippe Petain. Hailed after WWI as a national hero for his successful defense of Verdun, Petain later earned infamy when he led the Vichy administration, which collaborated with Nazi Germany in World War II.

Remnants of the Verdun battle — including memorials, ossuaries, sections of the old French forts and trench lines — dot the hilly area that stretches about 15 miles from east to west and 10 miles north to south. Some 11 million large-caliber artillery rounds were fired during the campaign, leaving a number of unexploded munitions — including shells, hand grenades and landmines — that still litter the fields. Although most are by now inert, visitors are warned not to pick them up or even touch them. Rusty chunks of shrapnel and barbed wire also are potentially dangerous, so care should be taken if trekking through the fields off existing roads or pathways.

Trenches offered the only shelter from the bullets and the barrage of artillery shells. Some were made out of concrete, but most were simply dug into the ground.

One hundred years later, the landscape remains visibly scarred by the thousands of overlapping shell craters, trench lines and bunkers blanketing the terrain. The Verdun battlefield encompassed nine villages so completely devastated that they were abandoned and never rebuilt after the conflict.

The city of Verdun itself was heavily damaged in the fighting, including its landmark Gothic cathedral. Most of the city now dates from the 1920s and 30s when it was extensively rebuilt.

In addition to the citadelle, located on the outskirts of the city, other must-see sites are the giant cemetery and ossuary at the village of Douamont, as well as Fort Douamont, where much of the fighting was centered. The fort was captured by the Germans at the start of the offensive through a stroke of luck and served as a base for German troops through much of the campaign until finally recaptured by the French. In May of 1916, a cooking accident sparked a munitions explosion that killed nearly 700 German troops, whose bodies are still entombed in the ruins of the fortress.

Verdun, France, battlefield• Location: The Verdun battlefield It isabout 90 miles west of the German border at Saarbrücken and about 160 miles east of Paris and 90 miles west of the German border at Saarbrucken.• Times: Opening and closing times vary according to month. Please check the website en.verdun-tourisme.com for times during the month you plan to visit.• Accommodations: Verdun has a number of small hotels and bed-and-breakfasts.• Costs: All the forts and museums charge entrance fees amounting to four4 euros for adults and two2 euros for children between ages 8 and 16, so it’s a good idea to go to the Tourist Office in Verdun to buy a Museum Pass of 23 euros for adults and 9.50 for kidschildren. It allows entry to , for all the sites in the area rather than paying for each separately. A guided tour of the forts, the battlefield and the so-called “trench of bayonets,” in which a platoon of French soldiers werewas buried alive by artillery shells, leaving only their bayonets sticking out of the ground, costs 25 euros for adults and 18 euros for children.• Food: The city of Verdun has various restaurant options, including French, Italian and Asian.• Information: While many visitors prefer to take organized bus tours of the region, aA car offers greater individual freedom to explore the battlefields, but organized bus tours of the region are available. Because of the sheer size of the battlefield, many visitors prefer a two-day tour. The city of Verdun’s website is has a number of small hotels and bed-and-breakfasts to choose from, and many can be found on the city’s tourism site: www.en.verdun-tourisme.com.