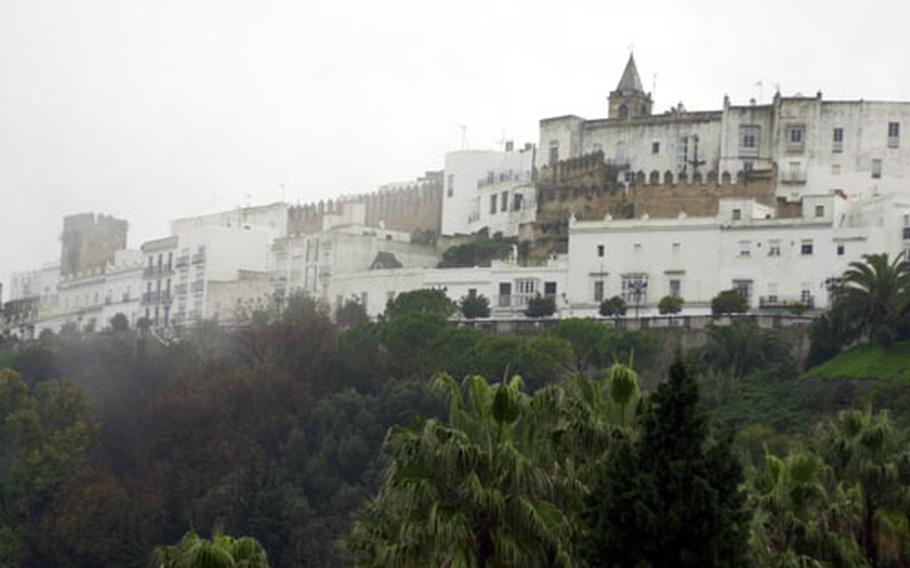 A man walks by an ornate ceramic fountain in the center of Plaza de España, a popular meeting place in Vejer de la Frontera with cafes, bars and restaurants ringing the perimeter. (Scott Schonauer / S&S) Vejer de la Frontera&#39;s narrow streets are often best explored on foot. Driving vehicles on some of the town&#39;s streets are likely to result in broken side mirrors or scratches. (Scott Schonauer / S&S) 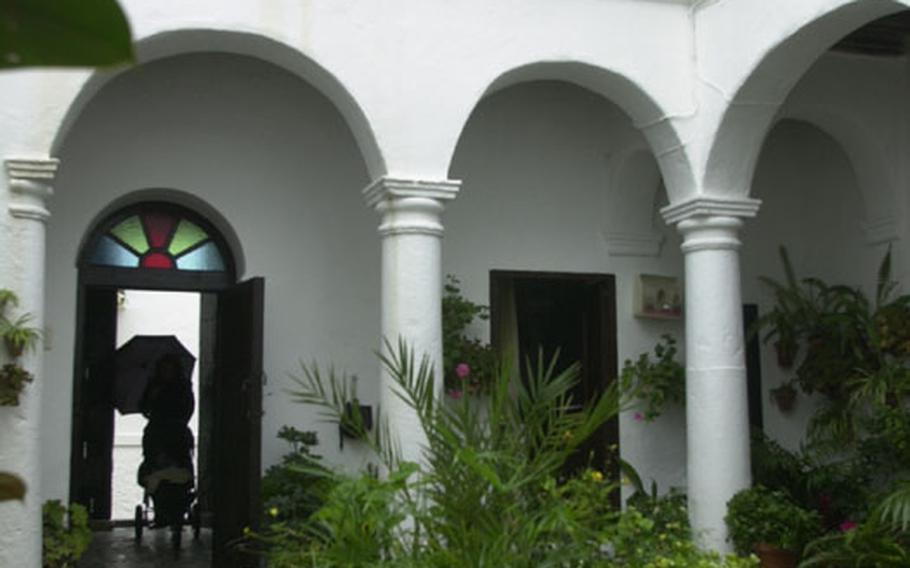 A small courtyard inside the 18th century House of the Entailed Estate, the ancestral home of King Sancho IV. (Scott Schonauer / S&S) 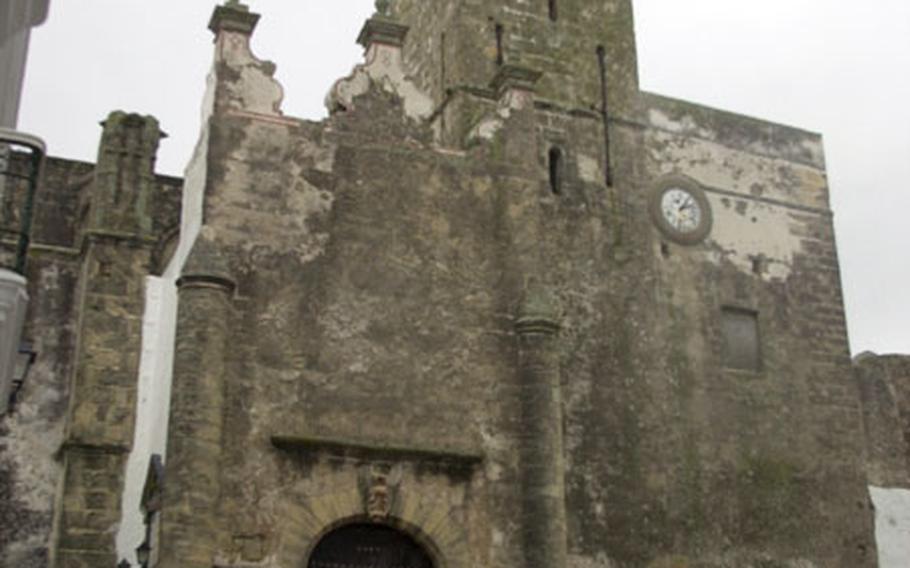 A man walks at the foot of the Church of the Divine Saviour, which was built on the site of an old mosque. (Scott Schonauer / S&S)

Driving up and down Vejer&rsquo;s narrow streets is not for the faint of heart or the typical American sports utility vehicle.

Go too fast and the vehicle&rsquo;s side mirror is lopped off in the blink of an eye. Take a curve too wide and the car gets a scratch as a souvenir.

The rainbow of streaks on some of the whitewashed buildings marks the toughest turns to negotiate, and shows why exploring this medieval hilltop town on foot is probably the wisest choice. On foot is also the only way a visitor can find some of the town&rsquo;s hidden patios and secret corners.

Vejer is regarded as one of southern Spain&rsquo;s gems, and is relatively unscathed by tourism or modern architecture.

In 1978, it won first prize in a national competition of beautiful towns and received the title of &ldquo;Area of Great Tourist Importance,&rdquo; according to the town hall&rsquo;s Web site. But that doesn&rsquo;t mean travelers storm this town on weekends or in the summer. Many tourists bypass it for the beaches or bigger cities of Cadiz or Jerez de la Frontera.

Past residents have left their mark over the years, and the town works hard to maintain some of its most important sites.

The Moors ruled the town for more than five centuries, but the Romans and the Phoenicians also lived on top of the hill overlooking the Barbate River. The city once bordered Muslim Spain, which is why the name includes &ldquo;de la frontera.&rdquo;

Today, the town overlooks ranches that are home to some of Spain&rsquo;s fiercest fighting bulls. One of the village&rsquo;s most famous fiestas is during Easter, when the city has its own version of Pamplona&rsquo;s Running of the Bulls.

The difference is that in Vejer there are only two bulls, and they run one at a time. Plus, each has padding on his horns. The event draws thousands of people and dozens of runners who taunt the bull as it barrels down the cobbled streets.

When bulls aren&rsquo;t running down the alleyways, visitors can safely explore several of the city&rsquo;s monuments and historical landmarks. Some of them are:

&bull; The church of El Divino Salvador: This church was built on the site of a mosque. The upper end is Gothic-Mudejar and the lower end is late Gothic.

&bull; Arab Castle: Built in the ninth century, it is located in the old quarter at the highest point of the walled enclosure.

&bull; Plaza de Espa&ntilde;a: The gathering point in town and site of many cafes, bars and restaurants. The plaza is more commonly known as the Plaza de los Pescaitos, or Square of the Little Fish. It got its nickname because there are goldfish in the center&rsquo;s fountain.

&bull; Convent of the Order of Conception: This 16th century building has recently been restored and is now used for cultural events. On one side is the Arco de Las Monjas, which is the gateway to the Jewish Quarter.

Directions: Vejer is about 50 miles from Naval Station Rota, Spain. It is just off N-340 from Cadiz to Algeciras. Turn off A4 at the Algeciras exit, get on N-340 and follow signs toward Algeciras. Stay on the road until the Vejer exit. Follow signs at the roundabout, and drive up the hill. Parking is available on the left.

Cost: Some of the monuments and historic sites require a donation. The tourism office in town has information about guided tours.

Time: Check with the tourism office on the times monuments are open. Most are closed on Sundays.

Food: Restaurants offer a variety of meat and seafood dishes because of the town&rsquo;s location in the country near the water. Game meat and cuttlefish are popular local dishes. Vejer-style ox tail is a speciality.

Info: For more information about festivals and tourist sights, go to the Vejer Town Council&rsquo;s Web site at www.aytovejer.org. Additional information is at www.vejer.com.