The view from the top of the Ulm Münster&#39;s steeple shows the town below, the Danube River, and the blue, pyramid top of the Ulm&#39;s new municipal library, which opened in 2004. It was built near the historic town hall on Market Square. (Karen Bradbury / S&S)

The view from the top of the Ulm Münster&#39;s steeple shows the town below, the Danube River, and the blue, pyramid top of the Ulm&#39;s new municipal library, which opened in 2004. It was built near the historic town hall on Market Square. (Karen Bradbury / S&S) 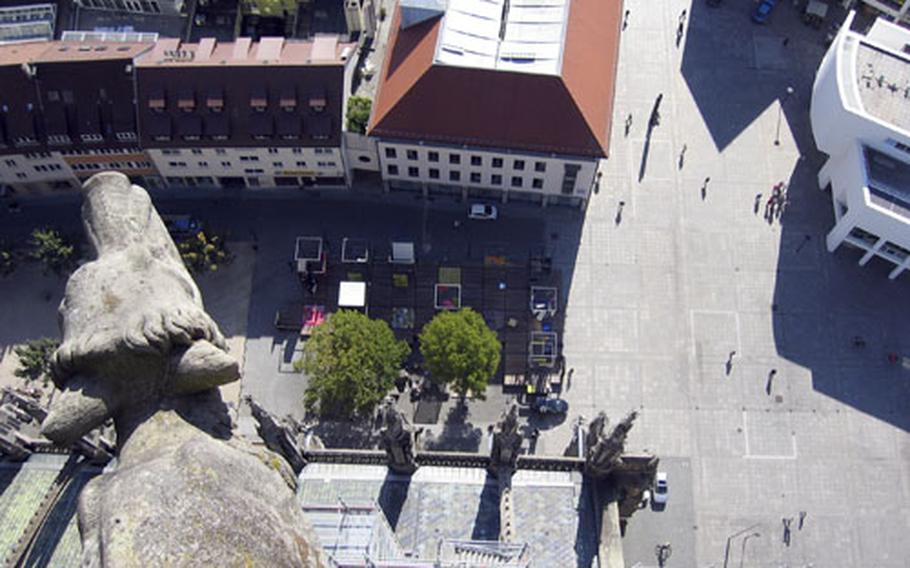 A few from the Ulm Münster&#39;s tower looks down at carved animals and statues jutting out from the cathedral. (Karen Bradbury / S&S) 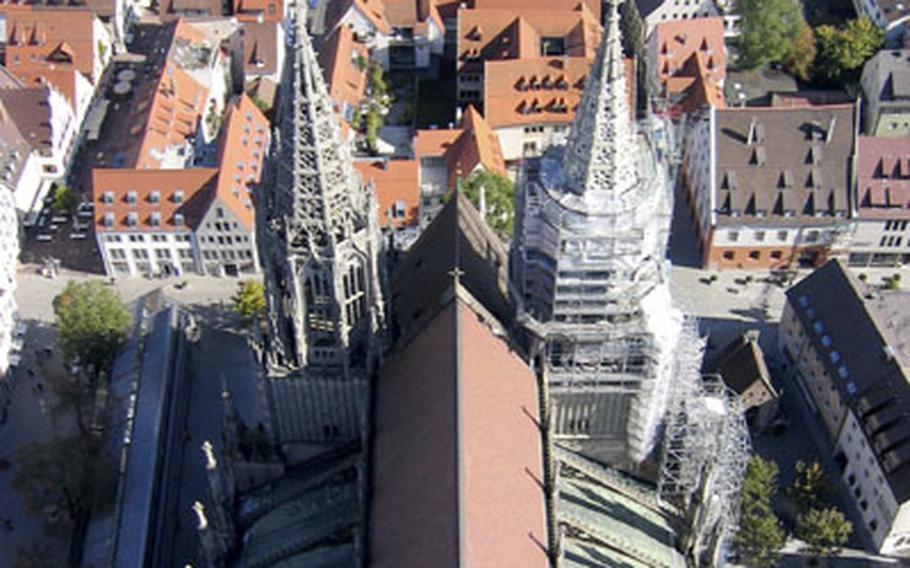 From the ground looking up, two of the cathedral&#39;s smaller towers seem towering. But from the top looking down, they seem small. Seeing them from above helps put into perspective how high up you really are. (Karen Bradbury / S&S)

Gazing up &mdash; way, way up &mdash; at the towering height of the Ulm M&uuml;nster in Germany is an experience in itself. Despite the scaffolding that currently covers it, the massive Gothic cathedral is overwhelming.

And if your plans call for an ascent, you may be wondering: &ldquo;Am I really up for this?&rdquo;

It&rsquo;s a mighty climb, but there&rsquo;s a great reward for those who trudge the 768 steps to the top. Plus, you have the added bonus of having conquered a superlative.

At 528 feet, Ulm&rsquo;s church tower is the highest in the world. The cathedral itself is the largest in southern Germany. But for world&rsquo;s speediest construction project, it takes no prizes. Work started in 1377, with the last stone in the steeple put in place in 1890.

Approaching the M&uuml;nster from the lively M&uuml;nsterplatz, a door on the building&rsquo;s right side leads to the tower&rsquo;s entrance. After paying the admission fee, you begin the climb up a steep, circular stone staircase. And spiral up it does, until you are winded, dizzy and praying to reach the top.

Things could be worse. A small window at every 360 degree turn ensures that some light filters in, and the narrowness of the steps allows for use of both hands for balancing. The metal grates on the windows surely weren&rsquo;t intended as such, but they make good hand-holds.

Eventually there&rsquo;s a point where the staircase levels out and you can take a breather. By now, you&rsquo;re well on your way to the top, but the fun isn&rsquo;t over yet. After admiring the view, head toward the staircase leading up from the midpoint of the roof for yet more climbing.

After several more minutes of exertion, you reach the topmost viewing platform, 462 feet above the city.

On a pleasant midweek afternoon in October, the balcony was mercifully uncrowded, giving plenty of time to appreciate the view. It is astonishing &mdash; your eyes pass over the urban sprawl, across the murky waters of the Danube, over the railroad junction and across undulating fields of green.

Off to the west, you see the hills of the Swabian Alb, which eventually becomes the Black Forest. Looking to the east takes you, visually at least, into Bavaria&rsquo;s Neu-Ulm and beyond. On the day of my visit, the skies were clear but I still could not see the Alpine skyline featured in a postcard for sale in the gift shop below.

Two things would have improved the visit: a pair of binoculars and some kind of visual guide of discernible landmarks. Unlike many observation points, there are no arrows or silhouettes to highlight places of interest.

The trip down, while easier on the respiratory system, takes a toll on the knees, and you might need a few minutes to regain your composure. This is a great time to explore the M&uuml;nster itself.

Through the entryway and off to the right, you will see a heap of stones. Check out what a stone block looks like before and after it has been carved into a piece for the construction of the cathedral, and marvel at the sheer number of hours that craftsmen must have devoted toward its completion. Walk the some 464 feet toward the opposite end to admire the lovely, centuries-old carved wooden busts of men and women gracing the seats for the choir.

Should you have more time, head toward the Fishermen&rsquo;s Quarter, with its half-timbered houses and canals gushing with clear water. Or walk alongside the city ramparts and down to the banks of the rapid-flowing Danube, a fine spot for a picnic.

On the QTDirections: Ulm is 58 miles from Stuttgart, Germany, reached by taking Autobahn 8 toward Munich to the juncture with B10 at exit 62. Follow B10 south into town. Parking garages are located throughout the city, and even the one at the Bahnhof (train station) wouldn&rsquo;t be too much of a hike. Or leave the vehicle at home and take the train to Ulm&rsquo;s main train station. The ride is about one hour from Stuttgart, about 2&frac12; hours from Mannheim.

Times: The tower is open from 9 a.m. to 4:45 p.m. daily through October, until 3:45 from November through January, and longer in the spring and summer.

Food: There is no cafe at the church, but there are many options around the M&uuml;nsterplatz. For good local fare head to the Fishermen&rsquo;s Quarter.

Information: For more on the cathedral, see the Web site http://tourismus.ulm.de/index.dpx; there is an English-language version. If climbing the tower, wear sturdy, nonslip and low-heeled footwear, and take binoculars.