ürzig, a model town on the Mosel 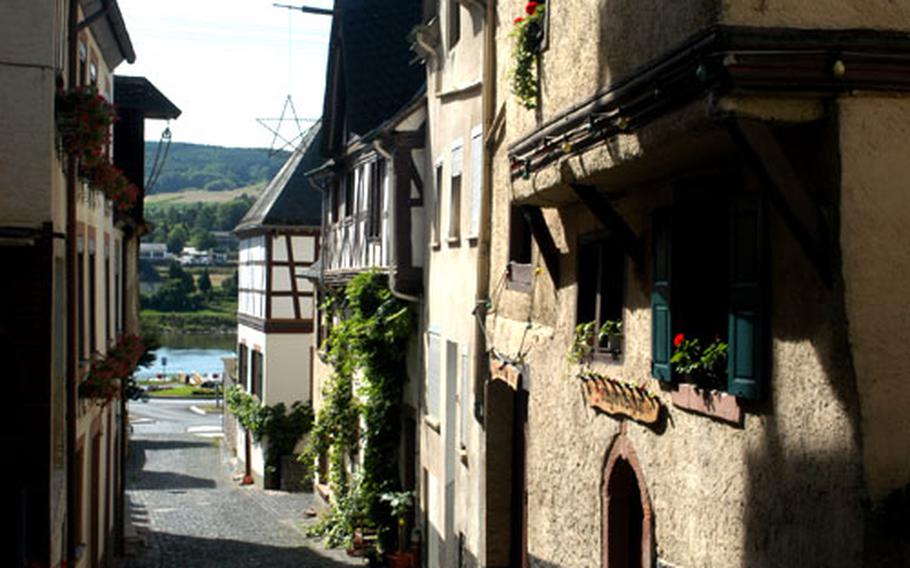 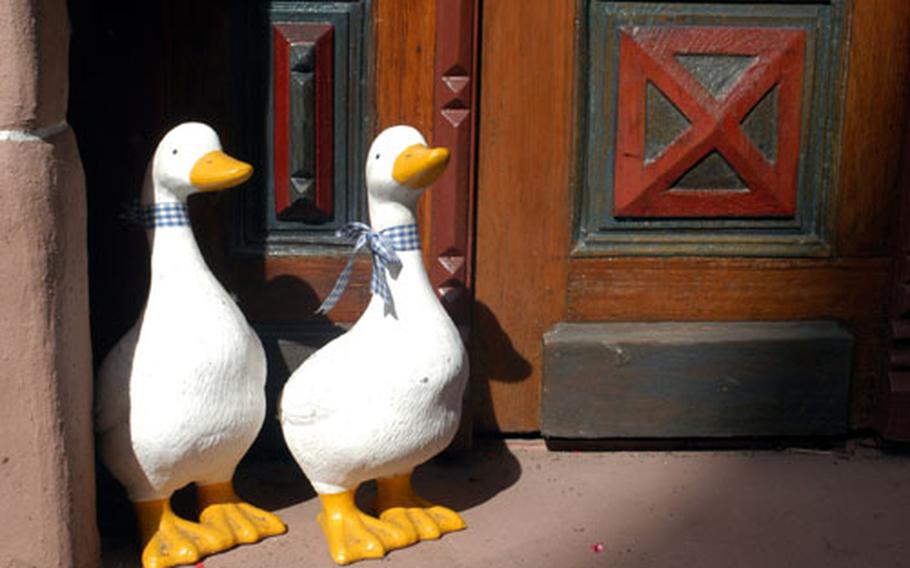 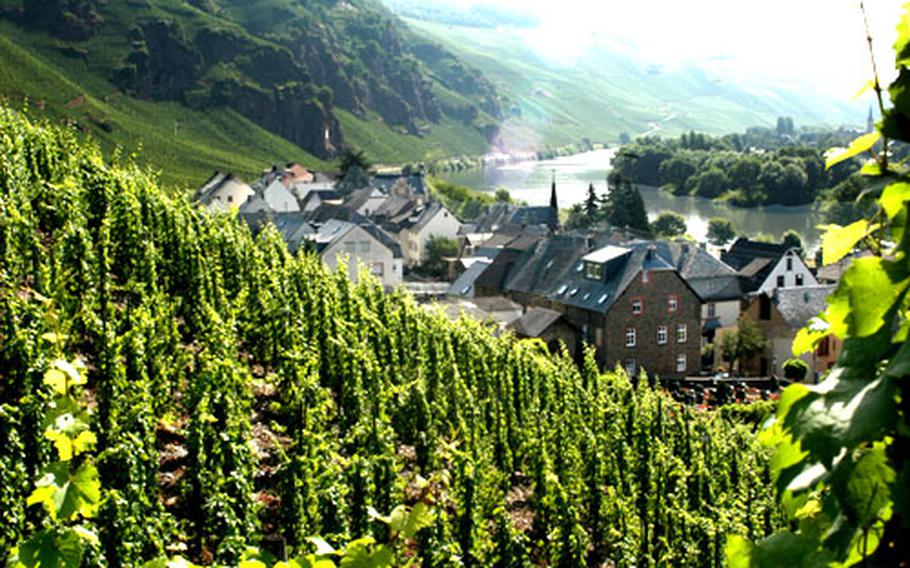 Vineyards of the famous ürziger Würzgarten, or "spice garden," surround ürzig. The wine is one of the best-known of the region. (Peter Jaeger / S&S) 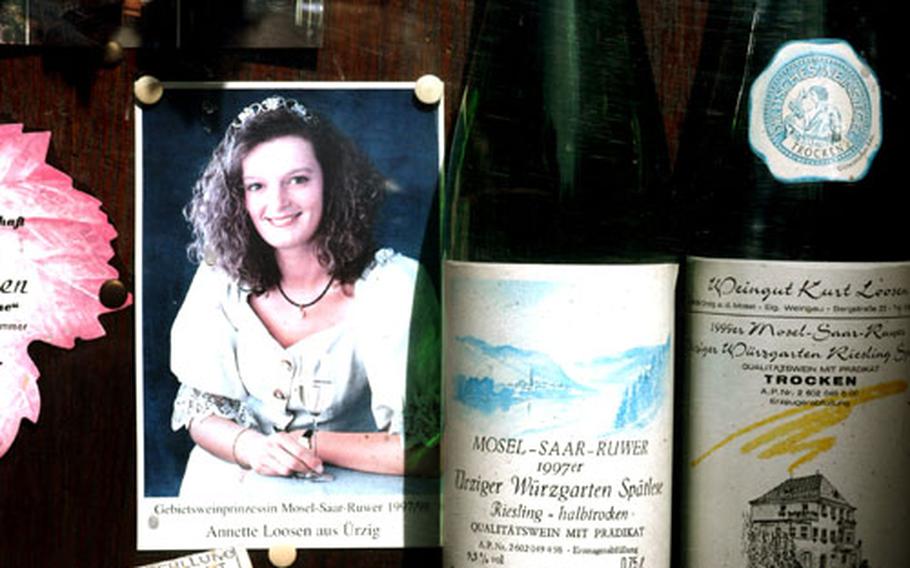 Kurt Loosen, a local winemaker, advertises his products in a glass box outside his house, Among the bottles is a portrait of daughter Annette, who was the district wine princess in 1997-98. (Peter Jaeger / S&S) 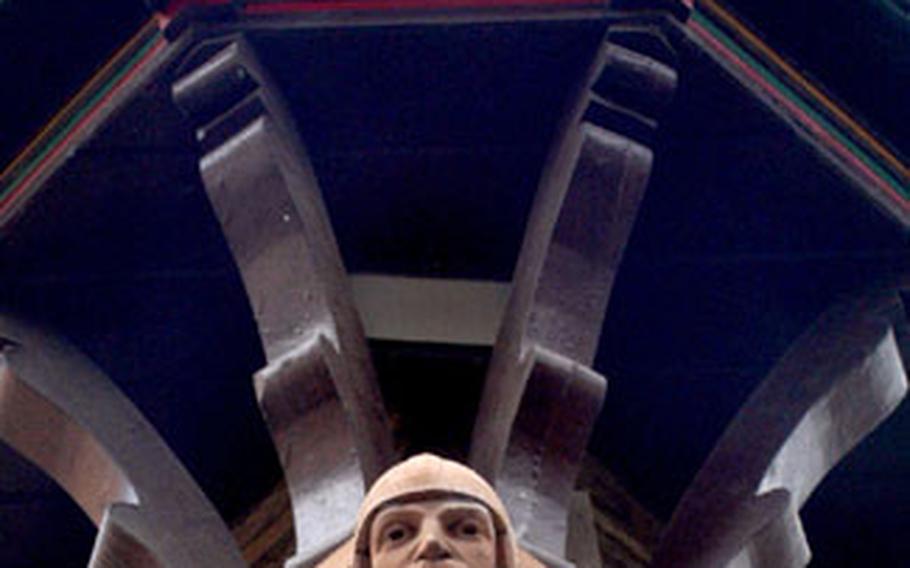 A carving of a knight on ürzig’s town hall holds up a crest showing the hall’s construction dates. The original date was 1603; the town hall was rebuilt in 1904. (Peter Jaeger / S&S)

It&#8217;s a perfect golden summer day on the Mosel River in Germany.

The small wine town of &#252;rzig rests quietly in the sun. Surrounded by steep vineyards, the picture-perfect town awaits visitors eager to explore its charms.

&#252;rzig, alias Moselbr&#252;ck, became known as &#8220;the Mosel town,&#8221; much to the excitement and sometimes the irritation of local residents when some of the young actors paid more attention to the local females than to their job.

All that is now history, but &#252;rzig lives off that reputation and advertises it prominently in its glossy tourist brochure.

Today &#252;rzig is just one of the many beautiful small towns along the Mosel, most of the year resting peacefully between its vineyards. It is the perfect place to do nothing, just rest and relax. And, naturally, sample the wonderful Rieslings &#252;rzig is famous for.

&#252;rziger W&#252;rzgarten (meaning &#8220;spice garden&#8221;) is one of the best-known wines of the region. It compares well with some of the best white Burgundies and Bordeaux of France, and is exported to the United States in growing quantities.

The pale golden wines with a delicate spicy taste can be sampled at almost all of the 35 wineries of &#252;rzig. Just stroll through the little side streets and compare the wines displayed in the windows or in glass boxes hanging on the facades of old half-timbered houses. Don&#8217;t be afraid to ring the bell and ask for advice and purchase a bottle &#8212; or several.

Often it is possible (especially in the off-season) to be invited to an impromptu &#8220;wine probe,&#8221; or wine tasting. Sampling the local wines with their charming names can be a mouth-watering experience: Graacher Himmelreich (&#8220;heaven&#8221;), Erdener Treppchen (&#8220;little staircase&#8221;) and &#252;rziger W&#252;rzgarten are all available. From dry fresh QbA wines (Quality wines of a special area) to rich, delicate Auslese wines, the whole range of aromas and flavors can be smelled and tasted.

And there&#8217;s no reason to worry about driving. Just purchase one or two bottles of your favorite wine and crawl upstairs. Most winemakers offer private rooms with an enormous breakfast for 40 to 50 euros for a double. Just look for the many Zimmer frei (&#8220;room available&#8221;) signs in all towns along the Mosel.

When I visited &#252;rzig with my wife, Heidi, we found a cozy room by looking for these signs. We stayed with Herman and Ingrid Oster in the center of &#252;rzig. Our room was simple but comfortable and because we were the only guests, it was not too inconvenient that the shower and toilet was located in the hallway.

Herman is a friendly man, a winemaker in the old tradition, and his charming wife Ingrid does the renting and makes a solid breakfast with a family touch. Talking to her while enjoying ham and cheese, homemade jam and freshly brewed coffee, we learned a lot about &#252;rzig&#8217;s past and its present.

The town was founded in the 12th century, and through the years, knights and kings, bishops and artists have left their mark on the half-timbered houses, narrow cobble-stone streets and stately wineries.

While &#252;rzig is peaceful town most of the year, it awakens and swings into action on certain occasions &#8212; including this weekend. That&#8217;s when it will hold its annual street fest called Around the &#252;rziger W&#252;rzgarten, a festival in the streets around St. Maternus church.

Finally, Aug. 13-15 will be the Harley and Wine Festival, a must for bikers. This year, the festival&#8217;s fifth, almost 1,000 Harley-Davidson motorcycle fans enjoyed the rally and a Riesling wine tasting in the festival tent.

Where: &#252;rzig is on the right bank of the Mosel River on Route 53 between the well-known towns of Bernkastel-Kues and Traben-Trarbach. From Autobahn A1/A48, exit at Wittlich and follow Route 50 into the Mosel valley and then toward Traben-Trarbach on 53 directly to &#252;rzig. From Autobahn A61, exit at Rheinb&#246;llen and follow Route 50 to Bernkastel-Kues and then 53 into &#252;rzig.

When: &#252;rzig is best visited spring through autumn, the high season being mid-August, September and October when room reservations are recommended.

The small town of 1,100 inhabitants has eight hotels and about 40 bed-and-breakfasts for a total of 600 beds. In spring and summer, it is no problem finding a nice place with or without a view in an old winery or a fancy hotel.