Riccardo Baldanzi and Bicycle Bob take a break from pedaling in a sunflower field. Baldazani owns a bike shop in Roccatederighi and conducts guided tours by bicycle on a variety of itineraries. (Leah Larkin / Special to Stars and Stripes)

Riccardo Baldanzi and Bicycle Bob take a break from pedaling in a sunflower field. Baldazani owns a bike shop in Roccatederighi and conducts guided tours by bicycle on a variety of itineraries. (Leah Larkin / Special to Stars and Stripes) 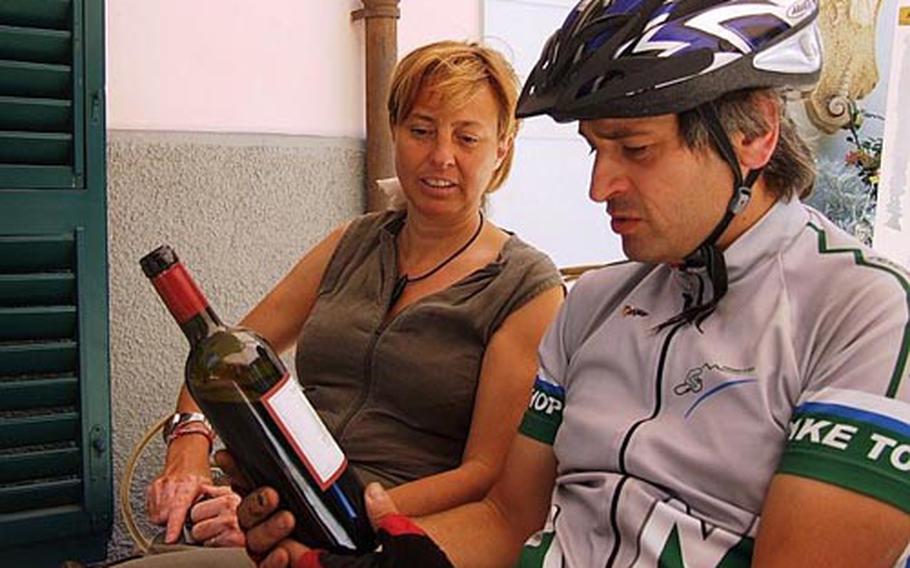 Riccardo Baldanzi checks out a bottle of wine at Tenuta del Fontino, a wine estate owned by Heidi Puntscher, left. The estate, which is also a bed-and-breakfast, has vineyards that produce about 50,000 bottles of wine every year. (Leah Larkin/Special to Stars and Stripes)

Bicycle Bob, my husband, likes wine as much pedaling.

So he was in his glory on a recent trip to Italy when we combined the two: wine tasting by bicycle.

We were in the Maremma region of southern Tuscany. Its wines are not as well known as those other Tuscan favorites: Chianti, Brunello di Montalcino and Vino Nobile of Montepulciano. Yet, the area produces some excellent vintages that are gaining recognition among producers and consumers.

The Maremma, known as Italy&rsquo;s "Wild West," was a land of marshes, mosquitoes and malaria until the late 19th century. Italian poet Dante even wrote that the region was inhospitable to the wildest of beasts.

He&rsquo;d be surprised today to find the hillsides covered with neat rows of vines laden with fat grapes, beautifully restored villas and farmhouses, even five-star hotels.

Nonetheless, the Maremma still is not on the itinerary of most tourists, so it&rsquo;s delightfully free of tour buses and crowds of camera-carrying visitors.

The name Maremma comes from mare, the Latin word for sea, and it&rsquo;s the maritime climate and soil that give the wines their distinction.

Riccardo Baldanzi, who owns the bike shop Maremma in Bici in the medieval hilltop town of Roccatederighi, led us on a bicycle tour that included tasting at three vintners, all in the province of Grosseto.

Heidi Puntscher welcomed us at Tenuta del Fontino, the first stop on the tour. Her 19th-century home &mdash; which is also an agriturismo, or bed-and-breakfast &mdash; has vineyards that produce about 50,000 bottles of wine every year. We tasted several while sitting on her terrace surrounded by lush gardens.

First was a refreshing white from the vermentino grape, a late-ripening grape originally from Spain. Puntscher said she produces about 7,000 bottles per year of the wine, which is aged in stainless steel tanks and must be drunk "quickly."

We moved on to a red, a 2004 Castel Diruto, named after a castle. Its grape origin was sangiovese, a red Italian grape said to have originated in Tuscany and one of the main components of Chianti.

The third wine, a 2004 Folavento, was oak-aged with a lovely hint of the wood.

Since we had to bike, we limited our tasting to three wines, although we would have been happy to try more. Biking was often off-road, on gravel paths surrounded by farm fields and distant hills. We did encounter some uphill pedaling, but nothing too strenuous.

Alessio Pagliai and his mother, Daniela Valentini, were our next hosts. They operate Podere Ristrella, a family wine estate.

"Every territory has its own characteristics," Valentini explains. "Our hills are rich in minerals, especially iron. The vines absorb this, which gives them their individual characteristics."

We lived dangerously, tasting five wines there, including a 2003 Armigero, which Valentini termed their best wine. The wine, a combination of 55 percent cabernet sauvignon, 25 percent sangiovese and 20 percent merlot, is aged in oak. It&rsquo;s very dry with a distinct and interesting taste. It pairs well with game and fatty meats, Valentini said. It costs 12 euros per bottle.

Podere Ristrella, with about a dozen acres of vineyards, also makes a sweet wine, Vino Santo Occhio de Pernice, as well as grappa and olive oil.

"Wine is a lot of work," Valentini said. "But it&rsquo;s a pleasure. It&rsquo;s a living thing. Like a baby, you must care for it. It evolves and grows over time."

We cycled into the town of Ribolla for our final tasting at I Campetti, a vintner who produces ros&eacute; in addition to white and red wines &mdash; a total of 70,000 bottles per year. Sixty percent of its 38 acres of vineyards are planted with the sangiovese grape.

A 2004 Baccio, 100 percent sangiovese that had aged 18 months in oak, was very pleasant. "It ages well and goes well with red meat," vintner Francesco Falciani says. It costs 10 euros per bottle. For something less expensive that is recommended for every day, we tried the red Castruccio at 6 euros per bottle.

A ros&eacute;, a 2006 Rosato, was also 6 euros per bottle. "We leave the grapes in their skin for 12 hours, then treat it as white wine," Falciani says of the ros&eacute;. "It&rsquo;s completely different than French ros&eacute;, much stronger."

He also suggested L&rsquo;Accesa 2006, a rich golden-colored wine with a hint of almonds at 6 euros per bottle, to go with seafood or be served as an aperitif.

There are two problems with biking and wine tasting.

First, it&rsquo;s not suited to making purchases. So before heading home, we went back to Podere Ristrella by car and bought several bottles, as well as a bottle of grappa.

Second, by the end of the day, the ride home can be a challenge. "It&rsquo;s a lot of fun," Bicycle Bob said of the experience. "But you definitely need a Riccardo to make sure you find your way back home after all the wine."

Photojournalist Leah Larkin lives in France and can be contacted through her Web site, www.leahlarkin.com , or blog address, www.provencetales.typepad.com .

Know and GoRenting bicycles through Maremma in Bici, Italy, costs between 10 and 20 euros per day depending on the type of bike.

Guided bike excursions cost between 18 euros and 25 euros per person, depending on itinerary. Find more details at www.maremmainbici.it/dove.php (there is an English version).

For information on the tour stops and the wines mentioned, see the following Web sites (the first two have English versions):