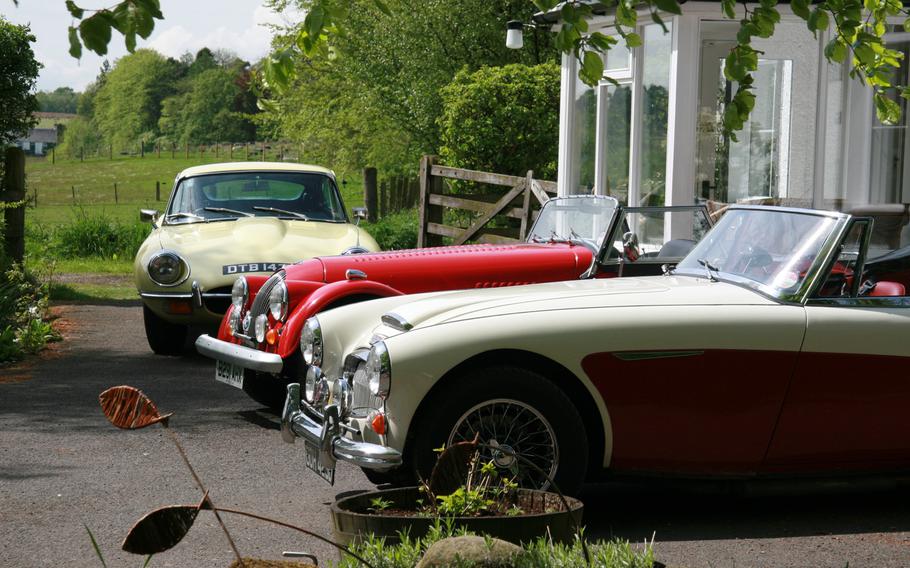 From back to front, an E-Type Jaguar, a Morgan and an Austin Healey dress up the countryside setting outside Caledonian Classic Car Hire, about a 50-minute drive from Edinburgh, Scotland. (David Cawley/Special to Stars and Stripes)

From back to front, an E-Type Jaguar, a Morgan and an Austin Healey dress up the countryside setting outside Caledonian Classic Car Hire, about a 50-minute drive from Edinburgh, Scotland. (David Cawley/Special to Stars and Stripes) 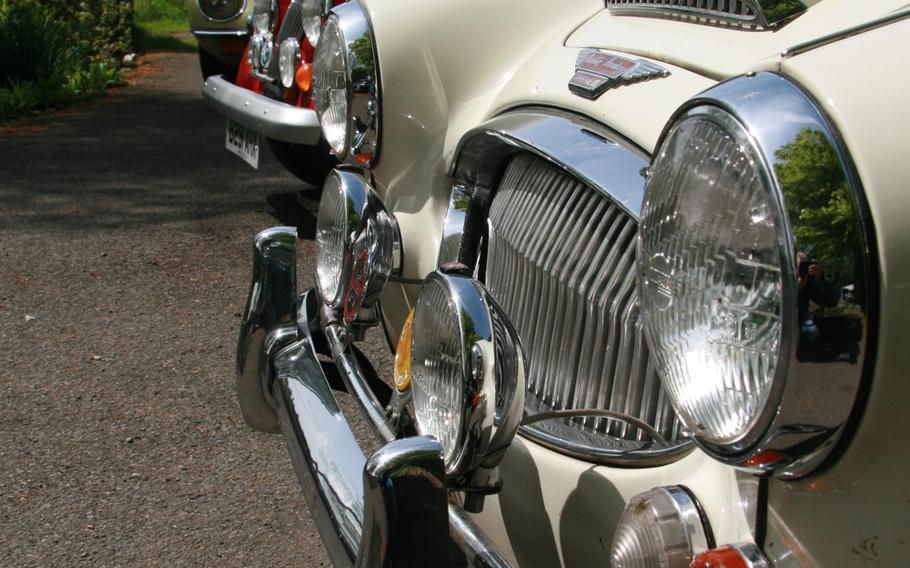 Lights dominate the classic front-end of an Austin Healey at Caledonian Classic Car Hire in Scotland. (David Cawley/Special to Stars and Stripes) 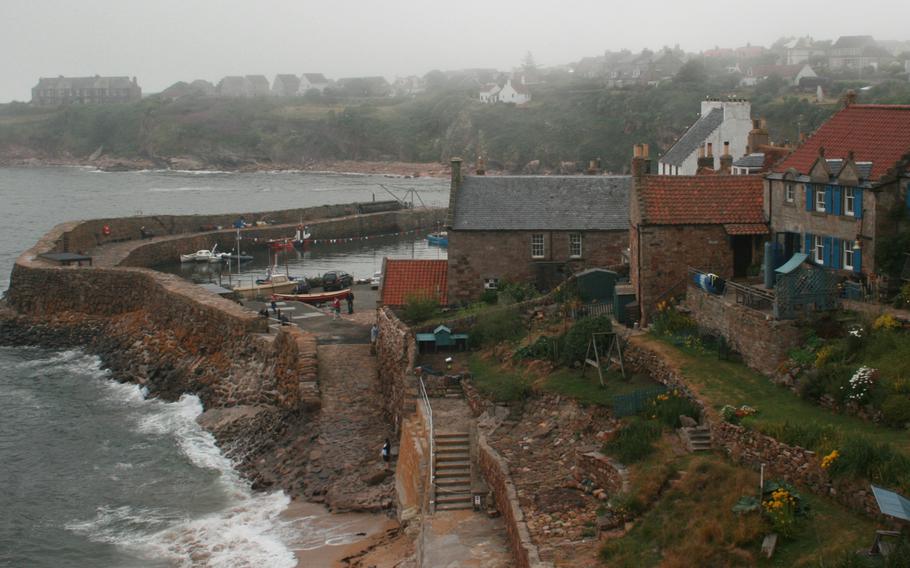 The little harbor town of Crail, in Scotland's Kingdom of Fife, offers a picturesque setting for a seafood meal. (David Cawley/Special to Stars and Stripes) 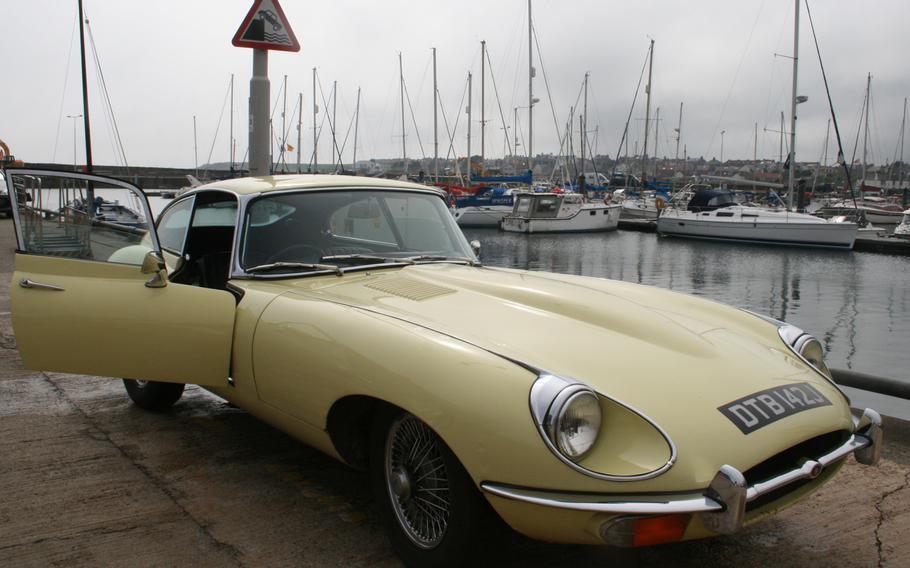 Driving a classic car, such as this 4.2 E-Type Jaguar, in Scotland's charming villages, can be a challenge, since many of the cars don't have power steering and need a lot of room to turn around. Here, our classic-car rental sits at the harbor in the fishing village of Anstruther. (David Cawley/Special to Stars and Stripes) 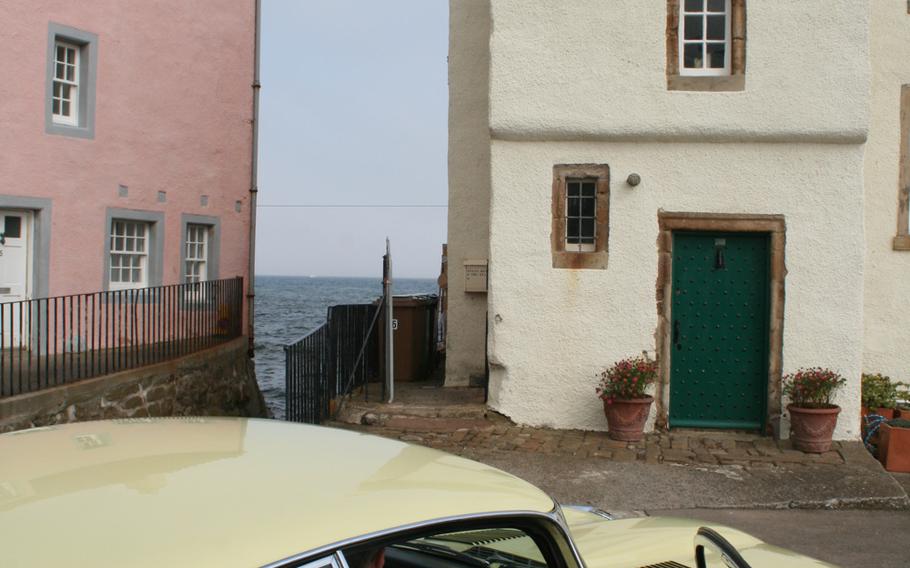 The sleepy village of Pittenweem, Scotland, relies on its petite historical harbor full of jostling fishing boats and enchanting good looks to draw tourists. While such villages are interesting destinations, they provide challenges for those who decide to rent a classic car to get around their narrow streets. (David Cawley/Special to Stars and Stripes)

“There’s no pussyfooting around with this one. You can’t be coy. Take firm control, show her who’s boss and you’ll get the best experience.”

Alex Stewart, owner, along with his wife, Tanya, of Caledonian Classic Car Hire, is introducing my wife and me to one of his lusty, head-turning vintage cars. We’d been immediately seduced by his straight six, 4.2 E-Type Jaguar. But before letting us loose among the traffic and pedestrians of eastern Scotland, we needed some familiarization and a short test drive.

“There’s no power steering, the brakes are a bit snatchy and she’ll shudder and judder when stopped,” Stewart said. “She doesn’t play well going slow, but get her into top gear, open her up and you’ll have a ball. It’s what the E-Type is all about.”

Folded into aromatic leather seats, we are confronted with a row of dials and chunky black switches covering the full length of the dash. Stewart removes the original manual from the glovebox, “bedtime reading for those who get their kicks out of knowing fuel tank capacities and the like.” Stuck to the windshield near the driver is a diagram explaining how to negotiate roundabouts.

In front of a seemingly endless stretch of primrose-yellow hood, the Kingdom of Fife and its coastline beckon.

As we set off, a cloudburst presents us with our first challenge. Which, among all these unmarked switches, works the windshield wipers?

Wife Andi finally identifies the right one and sets off three chrome blades. She takes control of everything beyond my reach and comprehension — which, in this car, is pretty much all of it.

First to a place that could almost be fictional but isn’t. Looming over nearby Dollar Glen and nestled between the Burn of Sorrow and the Burn of Care stand the brooding remains of 15th-century Gloum Castle. Then east through fertile flatland.

Among rows of potato and strawberry greenery, hunched, rain-sodden seasonal pickers take a chance to stretch their backs at our growling approach. At the handsome town of Cupar, the rain stops, the sun emerges and we roll the windows down.

As Stewart warned, at slow speed, the car was difficult to handle. The big, heavy Jag needed a great deal of effort to turn corners. Its 43-year-old gearbox also took some getting used to — it tended to shift into second, rather than the intended fourth, gear, which, needless to say, caused a jolt and over-revved engine. And if you’re tall like me, banging your head on the low-slung roof is a regular occurrence.

Less than hour later, we’re on the North Sea coast, slowly edging through the throngs of students, golfers and tourists clogging the narrow streets of St. Andrews. Passers-by stare and audibly coo as the deep purr of the Jag’s engine echoes from somber, grit stone buildings.

No time to bask in loving glances, I’m focused on not leaving scrapings of vintage-yellow paintwork on the corners of ancient royal colleges and knitwear stores.

I search for a place to park — ideally, an empty parking lot where other traffic doesn’t get in the way of a car with the turning circle of an oil tanker.

Following a sea wall picnic of warm Scotch pies from traditional local bakers, Fisher and Donaldson, I turn our chrome nose and bulbous headlights south, past St. Andrews’ broody 12th-century castle and along the A917 highway.

After the tight confines of town, both Jag and driver strain to be let loose. Shifting into fourth gear, we’re away with a throaty roar. Steering is light and responsive — the big, and up to now difficult, yellow cat has finally communed with its passengers and we’re now all having a blast.

This is a side of Scotland that doesn’t get much tourist attention. Here on the Fife coast, apart from golf, it’s the string of pretty fishing villages along the East Neuk that lure a small number of visitors.

Crail is one such village. It’s a maze of twisting narrow streets, lined with colorfully cute cottages perched above a stone harbor. Similarly, sleepy Pittenweem relies on its historical harbor full of jostling fishing boats and enchanting quaintness to pull in tourists.

For a diversion from all the seaside charm, we visited Scotland’s Secret Bunker. Now a tourist attraction, it lies deep beneath vegetable and fruit crops, a sprawling clandestine labyrinth of tunnels and control rooms full of dials, switches and post-apocalypse domestic arrangements.

Returning to the car hire’s open courtyard, we’re surrounded by radiant, chrome lovelies, the oldest being a 1961 MKII Jaguar 3.4.

Skulking and unloved in the corner, my 2005 plastic, point-and-go beige car slumps a little more forlornly among the Stewarts’ gorgeous stable.

Softened as we are by 21st century driving comfort and technology, it’s not always relaxing to drive a vintage car. There’s extra pressure not to damage it. In Scotland, you drive on the left, there’s not always power steering and most of these vintage cars are stick shifts.

Still, taking control of an iconic, classic design with its fragrant, aged leather and growly thoroughbred engine, combined with some admiring double-takes from passers-by, adds panache to any road trip.

Budget as well as major airlines fly into Edinburgh from various points in Europe. Easyjet (easyjet.com) offers direct flights from Berlin, Hamburg and Munich. Germanwings (germanwings.com) flies from Cologne, while Lufthansa (lufthansa.com) flies from Frankfurt. Budget airline Ryanair also has direct flights from Frankfurt Hahn airport. Alex Stewart, owner of Caledonian Classic Car Hire, can pick you up at the airport if given advance notice.