A violinist plays for the crowd on Trier&#39;s pedestrian shopping area. In the distance is the Porta Nigra, a Roman city gate from the second century. (Seth Robbins / S&S)

A violinist plays for the crowd on Trier&#39;s pedestrian shopping area. In the distance is the Porta Nigra, a Roman city gate from the second century. (Seth Robbins / S&S) The Wine Ship of Neumagen, a sandstone sculpture of a ship loaded with casks that depicts how the Romans brought wine to Trier, is one of finest pieces at the Rheinisches Landesmuseum in Trier. (Seth Robbins / S&S) 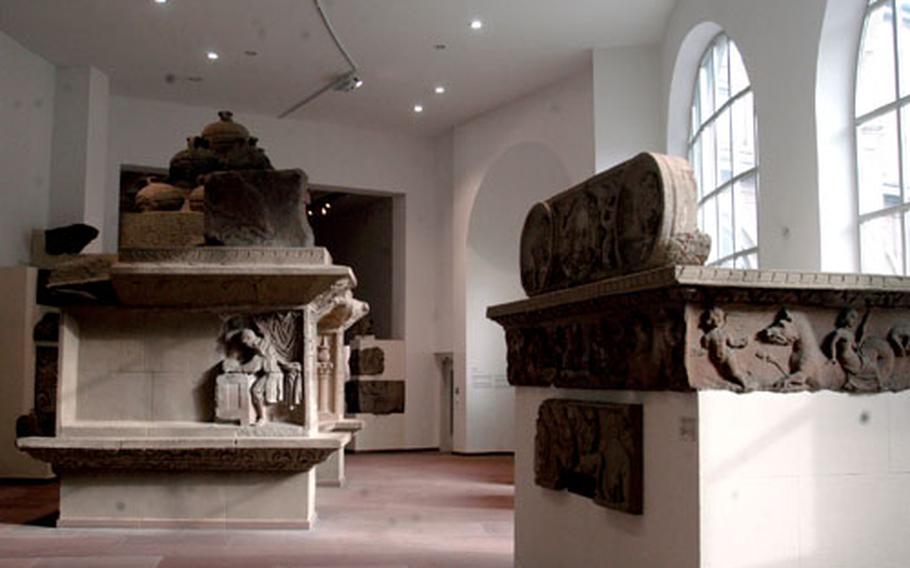 Several Roman monuments, some of them reconstructed, are housed in the Rheinisches Landesmuseum, which is considered one of the best museums north of the Alps for Roman antiquities. (Seth Robbins / S&S) 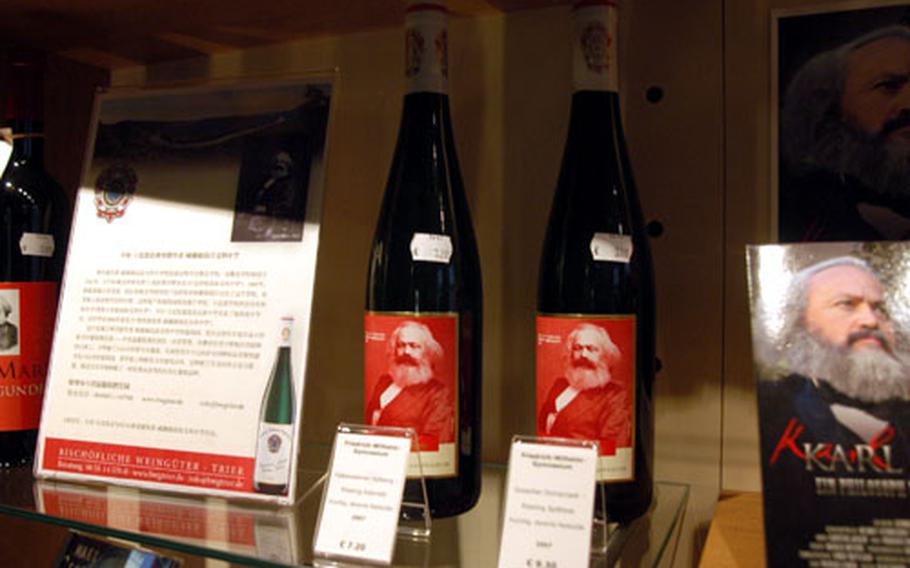 Karl Marx&#39;s face hawks everything from plates to wine at a gift shop in the museum that commemorates his life and work. Karl Marx was born in Trier, and his childhood home has been converted into a museum. (Seth Robbins / S&S) 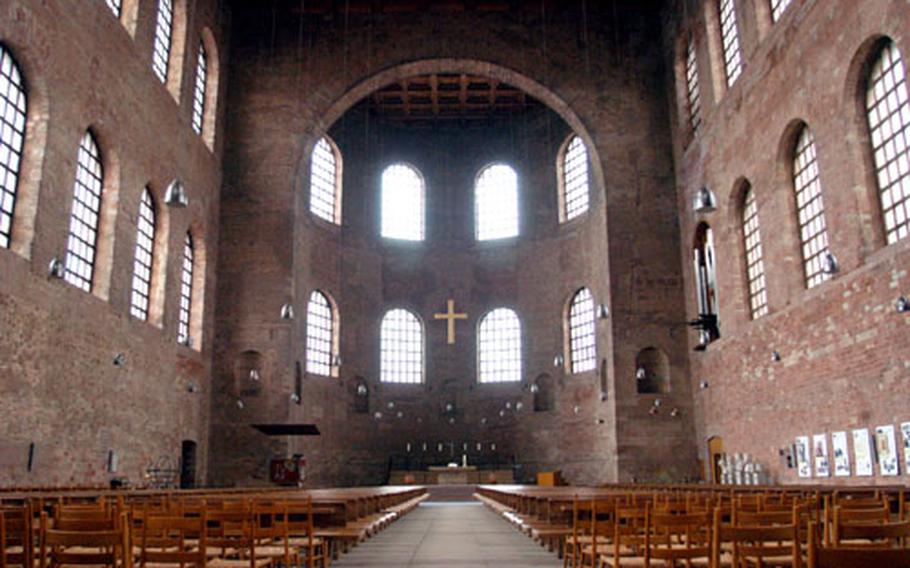 A view inside the cavernous Basilica of Constantine, which is now used as a Lutheran church. The building dates from the fourth century. (Seth Robbins / S&S)

In 1993, an amateur archaeologist unearthed more than 2,500 Roman gold coins &mdash; worth an estimated $3.25 million &mdash; from the rubble of a parking garage construction site in Trier, Germany.

A shovel, though, isn&rsquo;t needed to find the many treasures in Trier, a city on the Moselle River that was once part of the vast Roman Empire. You just have to know where to look.

One of the best places to start is the Rheinisches Landesmuseum, which displays the coins. The museum, founded in 1877, houses many Roman antiquities built when the city was called Augusta Treverorum. The Latin name tongue-tied its later conquerors, and so it was shortened to Treves and finally to Trier.

The museum has a detailed model of the city as it looked under the Romans to help orient visitors and get them started on discovering the city.

The Romans ruled Trier from 30 B.C. to A.D. 489. The city&rsquo;s Celtic people eagerly fashioned themselves after the Romans, wearing togas and sculpting monuments studded with figures from Roman mythology. A copy of one of these grave-site monoliths stands in the courtyard of the museum, its panels depicting the operations of a shipping company.

"It was advertising for the business," said Frank Unruh, the museum&rsquo;s resident archaeologist and historian. "They were very pragmatic."

One of the museum&rsquo;s more famous pieces is a sandstone sculpture of a Roman boat loaded with wine casks; it is called the "Wine Ship of Neumagen," named for a town on the river, and is believed to have marked the tomb of a Roman wine dealer from around 220. The Romans brought grapevines to the banks of the Moselle and some of today&rsquo;s vineyards can be traced to that time.

The museum is not the only place to see remnants of the Romans. Their sturdy buildings were meant to last, and some are still easily viewed on the streets of Trier. One such building is the fourth-century Basilica of Constantine. At 221 feet long with a ceiling that juts 100 feet into the air, it stands as the largest surviving single-room structure from Roman times.

Worshipers now pray within its cavernous hall, but the emperor originally used it as a throne room, astounding guests with its lavishly painted walls and sheer size. Besides the basilica, an amphitheater lies on the outskirts of the city, and a Roman bridge still carries traffic across the river.

The most famous Roman site, though, is the Porta Nigra, which is the largest Roman city gate north of the Alps. It was given its name, which means "Black Gate," in the Middle Ages because of the gray sandstone used to construct it. Now, its fa&ccedil;ade is stained black from the exhaust of passing vehicles, and the name seems even more apt.

The Porta Nigra was among four gates that granted entrance to the ancient city. Now, it opens up on a street lined with cafes &mdash; delectable treats in their windows &mdash; and other shops. This shopping district runs for about two blocks, ending at the house where Karl Marx was born. The house has been converted into a museum, filled with information about his life and works.

But the author of "Das Kapital," a critique of capitalism, might not like the gift shop. Inside, his face hawks everything from plates to T-shirts &mdash; even wine with his mug can be bought for about 7.20 euros.

Know and go ...Directions: From the Kaiserslautern area and the southeast, take Autobahn 62 to A1 until it intersects with A602 and follow that into Trier. From Bitburg or Spangdahlem, take B51 south to Trier. The Rheinisches Landesmuseum is at Weimarer Allee 1, between the Imperial Baths and the Basilica of Constantine.

Food: Trier has many restaurants and cafes clustered along its pedestrian zone, which starts near the Porta Nigra at Simeonstrasse. There are also several restaurants near the Kaiser Wilhelm Bridge that offer fine food and lovely views of the river.

Information: The Rheinisches Landesmuseum&rsquo;s Web site, in German, is http://landesmuseum-trier.de/de/fundstueck.html. Trier&rsquo;s Web site is http://cms.trier.de/frontend/resource/, with an English version. There is a tourist information booth behind the Porta Nigra.