Triberg: Waterfalls a cool idea on a hot German day 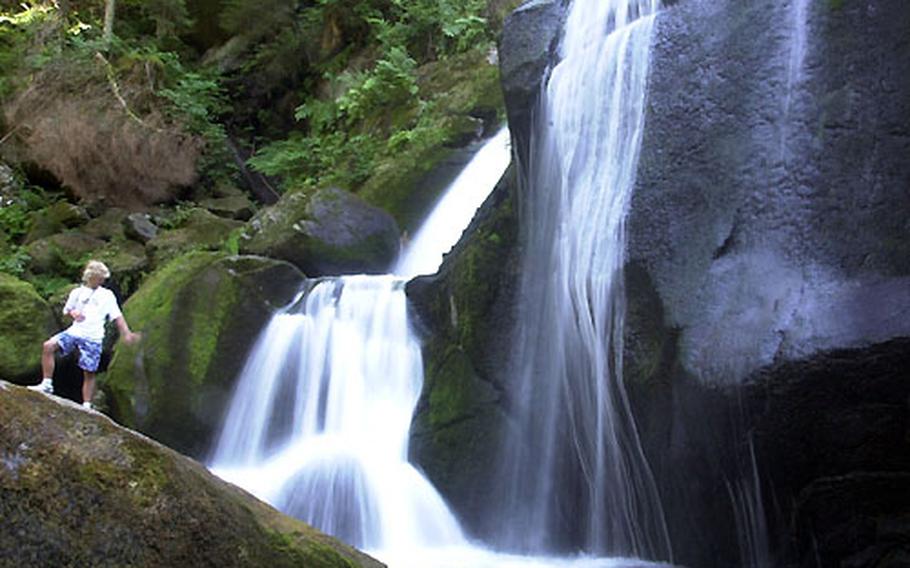 Cool cascades of fresh falling water are the centerpiece for hiking trials that crisscross the small park under the tall pines of the Black Forest. A trip to the Gutacher Wasserfall, as the falls in Triberg are known, proved the perfect remedy for Germany’s record summer scorcher. (Jon R. Anderson / S&S)

Cool cascades of fresh falling water are the centerpiece for hiking trials that crisscross the small park under the tall pines of the Black Forest. A trip to the Gutacher Wasserfall, as the falls in Triberg are known, proved the perfect remedy for Germany’s record summer scorcher. (Jon R. Anderson / S&S) 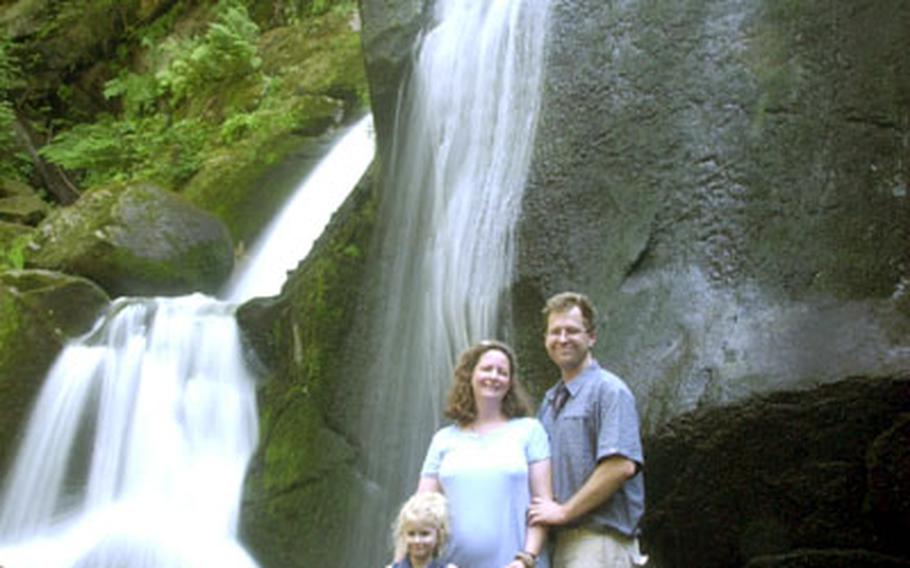 “Smile and say ‘Ahhhhh.’” The Anderson family — Marley, Jon and 3-year-old Amelia — find comfort at the Triberg falls during the recent heat wave. ()

My wife and I looked at the weather forecast and blinked.

It was going to be another July day on the sweatier side of 90 degrees.

Like the wilting and stunted crops suffering from Germany&rsquo;s fire blast this summer, we were feeling the withering effects of the heat wave.

&ldquo;We&rsquo;ve got to get out of here,&rdquo; my wife, Marlaina, said matter-of-factly.

She is seven months into her pregnancy, and I&rsquo;ve learned there&rsquo;s no debating or discussing when the matter-of-fact tone emerges in her voice. I had visions of a long road trip deep into Norway, fleeing north from the heat like sun-stroked refugees.

&ldquo;I know,&rdquo; she said as I tried to figure out the drive time to the Arctic Circle, &ldquo;how about the Black Forest? We could go to the falls at Triberg.&rdquo;

About 2&frac12; hours later, and a relatively quick sprint down Autobahn 5 from our home in Heidelberg, Germany, we were there.

Triberg, nestled in the rolling foothills of the Alps about 1,500 feet above sea level, is among &mdash; if not the &mdash; chief cuckoo clock sites for shoppers in Germany. Indeed, we counted several Haus der 1000 Uhren and other shops selling cuckoos as we drove into the Swabian village.

But with our eye less on time and more on temperature, we were looking for the entrance to the Gutacher Wasserfall, as the falls in Triberg are known. And with its main entrance smack in the center of town, it was easy to find.

With the Gutach River cutting its way down the granite-strewn valley, the park area is actually a series of waterfalls that begin almost as soon as you enter the deep shade of the tall pines just past the small ticket kiosk.

Although the falls are touted by guidebooks as the &ldquo;highest waterfall in Germany&rdquo; &mdash; it plunges about 500 feet &mdash; what mattered more to us was the oh-so-noticeable drop in temperature as we walked along the cascading river.

Even despite her &ldquo;advanced condition,&rdquo; my wife barley used the graceful wooden fence-rails that line much of the well cut, if often steep, pathways up the falls. Meanwhile, our 3-year-old daughter, Amelia, could barely contain her excitement, scurrying up and down the trail like the strange pointy-eared squirrels that inhabit this part of the Black Forest.

In fact, signs touting the squirrel silhouette mark the trail that takes you on a 30-minute or so hike to the uppermost falls. You can buy bags of peanuts to feed the squirrels at the main gate for 50 euro cents.

Two other longer, but less-steep, trails crisscross the falls area.

One of those, marked by a church symbol and called the Culture Trail, meanders to nearby Lake Bergsee where there is a playground and paddle boats for rent.

Local legend says that the church you pass along the way, Maria in der Tanne &mdash; or our Lady of the Fir &mdash; has been a place of healing for the faithful since the 17th century.

The third trail, marked by a hiking boot symbol, is the longest but still takes only 90 minutes from start to finish, according to guidebooks.

Called the Nature Trial, this path takes a more leisurely route through the forest before reaching the top section of the falls.

For those who prefer to do the downhill hiking first, there is another entrance with parking at the top of the falls and a third entrance half-way up. Both can be found by following B-500 just west of town. Trail maps are part of the minimal entrance fee.

As we entered the park from the main entrance, we didn&rsquo;t need a guide, however, to boulder-hop our way down the short distance to the sweet coolness of the river itself.

If there is a better remedy to a hot summer day than wading under the misty spray of a cool waterfall &mdash; especially in a country that for some reason has a problem with the concept of air conditioning &mdash; I would like to know about it.

While I snapped pictures, my daughter played in knee-deep water among moss-covered boulders and my wife sat riverside, barefoot toes dangling in the light current.

It doesn&rsquo;t have to be 90-plus degrees to be the right time to visit the falls at Triberg, Germany. A bright fall day would be an excellent time, too.

Directions: From Autobahn 5, take exit 55 (Offenburg/Villingen/Schwenningen) and follow B-33A to B-33 and signs to Triberg and &ldquo;Wasserfall.&rdquo;

Photo tip: Take along a tripod and a camera with shutter speed control for photos that capture the smooth, blurry effect of rushing water at the falls.

Experiment with anything slower than 1/60th of a second to capture varying degrees of the blur effect and use the camera&rsquo;s self-timer to eliminate tripod wiggle when you press the shutter release. Many camcorders also offer shutter speed control for the same effect in home movies.

The tripod also provides a handy way to take family portraits beside the falls.