Toulouse: French town has many delights to taste Delicious assortment at Michel Sarran, a restaurant in Toulouse, France, that has earned two Michelin stars and where each course is a work of art. (Leah Larkin/Special to Stars and Stripes)

Delicious assortment at Michel Sarran, a restaurant in Toulouse, France, that has earned two Michelin stars and where each course is a work of art. (Leah Larkin/Special to Stars and Stripes) 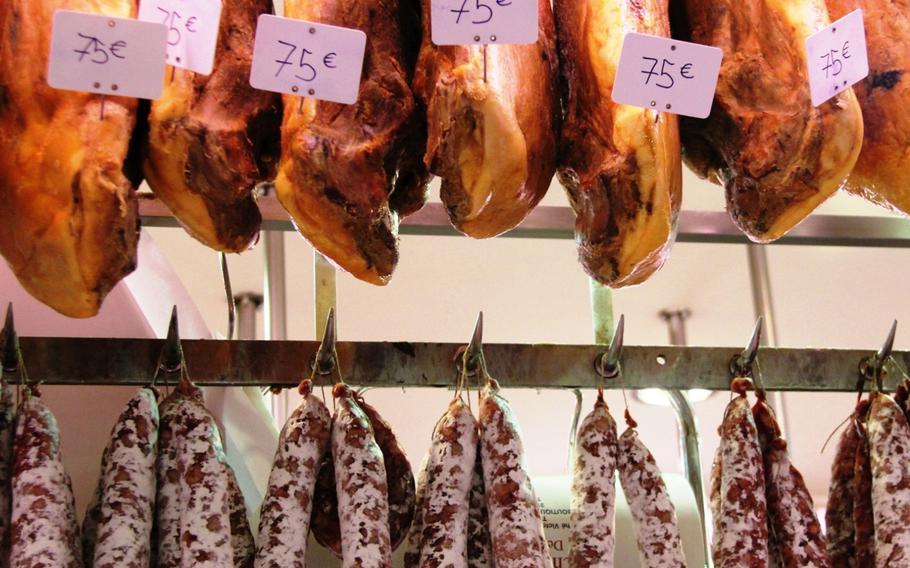 Toulouse is a city famous for sausages and hams as displayed here in one of its well-known markets. (Leah Larkin/Special to Stars and Stripes) A profusion of berries makes for a colorful display at a Toulouse market. (Leah Larkin/Special to Stars and Stripes) 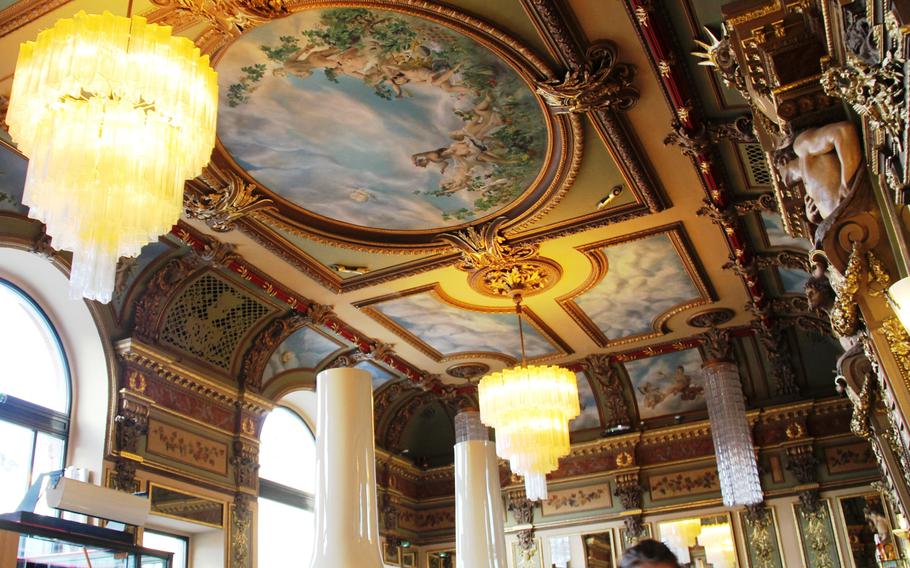 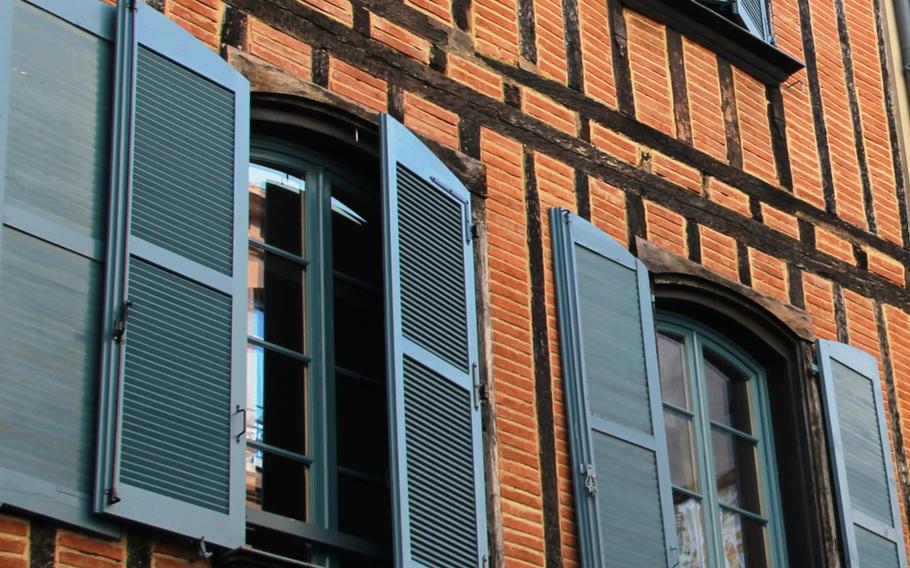 Many shutters and doors in Toulouse, France, are painted in shades of blue reminiscent of the blue dye (pastel), which brought the city wealth in the Middle Ages. (Leah Larkin/Special to Stars and Stripes) Tall towers are a feature of many of the medieval mansions in Toulouse, France. They served no purpose other than to indicate the wealth of the owner. The taller the tower, the richer the owner. (Leah Larkin/Special to Stars and Stripes) Much of central Toulouse is a pedestrian zone and fun to explore. (Leah Larkin/Special to Stars and Stripes) 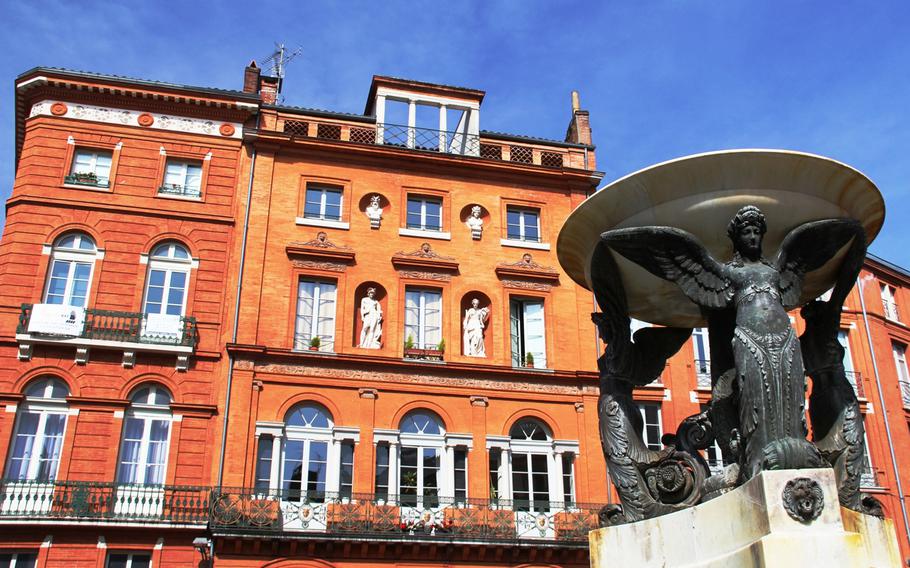 Toulouse has earned the nickname of Ville Rose, or Pink City, because many buildings in the city are made of rose- or red-colored brick. (Leah Larkin/Special to Stars and Stripes)

Southwestern France: The land of sausages, preserved meats — and foie gras, that decadent delicacy that is the fattened liver of geese or ducks.

For a foodie, tasting these regional specials was a highlight of a recent trip to the Midi- Pyrenees region in this corner of France. The trip kicked off in Toulouse, France’s fourth-largest city, where friends and I enjoyed several meals at fabulous restaurants and admired the city’s sights.

Lonely Planet recently named Toulouse — a dynamic university city that is home to Airbus — one of the top 10 cities to visit in 2015. Exploring the city, whose pedestrian area covers six square miles, is a joy.

Walk past grandiose churches and medieval mansions, parks and gardens, fountains. Saunter along the banks of the Garonne River. Linger at an outdoor cafe and take in the lively scene. Toulouse is also a major space center. At the Cité de L’espace (space center park), visitors enjoy an amazing journey into space with interactive discoveries

Lunch at Emile, a Toulouse favorite since the 1940s, is the perfect beginning to a Toulouse visit. Former French President Jacques Chirac relishes chef Christophe Fasan’s cassoulet, the city’s signature dish, a hearty stew of preserved meats and white beans.

We sat outdoors in front of the restaurant, an old house on the bustling Place Saint George. My first course was exquisite: ravioli stuffed with foie gras and covered with a delectable sauce of porcini (cep) mushrooms. Grilled fish and a sinful dessert, a molten chocolate creation with blood orange sherbet, followed.

Toulouse enjoyed its Golden Age from 1450-1562, largely thanks to the woad plant. Its leaves were used to produce a blue dye for textiles known as pastel, and the city became a major center in woad trade. Even today, many of the city’s structures have shutters and doors painted in various shades of blue. Woad is now used in the cosmetics industry due to the beneficial properties of its oil. There are several shops in the city selling woad products. Always in pursuit of a magic anti-wrinkle potion, I purchased two creams at Graine de Pastel. I still have wrinkles, but the creams are pleasant.

Dinner at Michel Sarran, a restaurant that has earned two of the coveted Michelin stars, was the ultimate — a multicourse tasting menu with minute delicacies attractively served on trendy plates or in bizarre bowls.

Each course was a painstaking work of art with numerous bites of exotic creations, such as sea urchin mousse and hay ice cream. I savored tiny pieces of chicken in a crayfish sauce with a delicious citrus flavor surrounded by delicate tidbits of other edibles.

Another unusual ingredient frequently found in food and beverages in Toulouse is violet. Said to have been brought here by a soldier in Napolean III’s army, Toulouse violet is still cultivated and used to produce crystallized flowers, teas, chocolates and perfumes.

But it’s neither blue nor violet for which Toulouse is best known. The city has earned the name “Ville Rose” (“Pink City”) because many of its buildings are made of rose- or red-colored bricks produced in the area’s rich clay soil. Among these are lavish townhouses from the 16th century, many with tall towers. The richer the owner, the higher the tower, we learned.

We had a light lunch at Capucin, signé Bras, the latest enterprise of Michel Bras, a chef who has several restaurants in this part of France that together have earned him three Michelin stars. This venture offers gourmet fast food — sandwich-type ingredients (many tasty combinations such as truffles and melted cheese, foie gras and chutney) served in edible cones.

It’s frustrating to be a foodie and visit mouth-watering markets where you want to buy, buy, buy. How to get it home? I restrained myself during visits to two of the city’s well-known indoor markets, Le Marché des Carmes with 50 stalls, and the Victor Hugo market. The latter has 100 stalls, including gourmet vendors, and is recognized as one of the most prestigious markets in France. I had to have one food souvenir — a small jar of pork pate made from specially raised black pigs, known as Le Noir de Bigorre.

My favorite restaurant: Le Bibent with its glamorous baroque and art nouveau decor — plus great food, including a tasty first course, a tartare of several kinds of fish and oysters with a hint of ginger served in oyster shells.

The dessert was over the top: a gigantic mille-feuille. This favorite French pastry whose name translates as “a thousand leaves” is layers of thin, flaky pastry with custard in between. Chef Christian Constant’s version just may have a thousand layers. It’s enormous, yet light and yummy.

Getting there Major airlines such as Lufthansa, British Airways and Alitalia as well as the budget airline easyjet fly to Toulouse from points in Germany, the United Kingdom and Italy.

• Visit Toulouse by bicycle. It’s flat and has 140 miles of reserved bicycle lanes, as well as its own automatic bike rental system, velo.toulouse.fr.

• Several kinds of boat trips are offered on both the Garonne River and the Canal du Midi, which crosses the town, toulouse-croisieres.com and bateaux-toulousains.fr