Tongbok Market in Pyeongtaek offers something for everybody 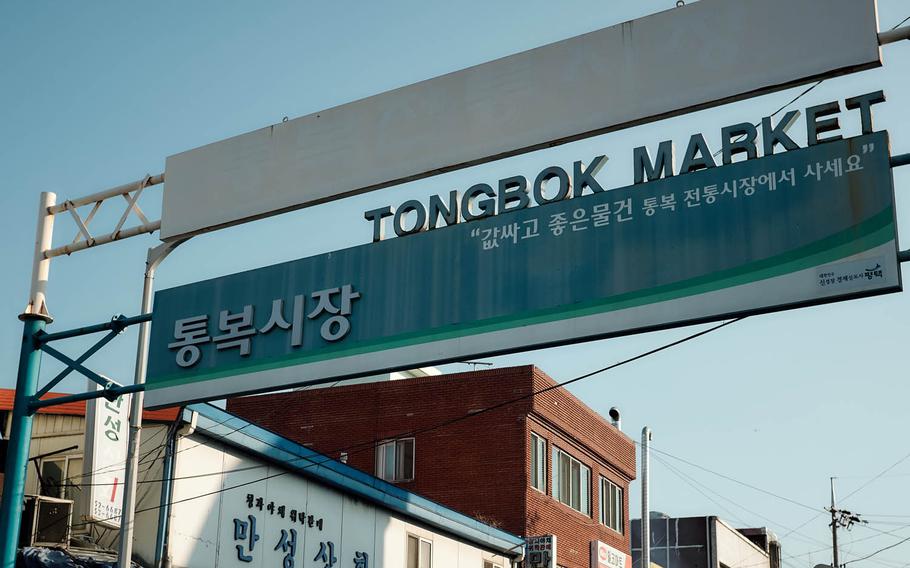 One of the entrances to Tong Bak Market in Pyeongtaek, South Korea. Tong Bak is the largest outdoor market in the port city. (James Kimber/Stars and Stripes)

One of the entrances to Tong Bak Market in Pyeongtaek, South Korea. Tong Bak is the largest outdoor market in the port city. (James Kimber/Stars and Stripes) 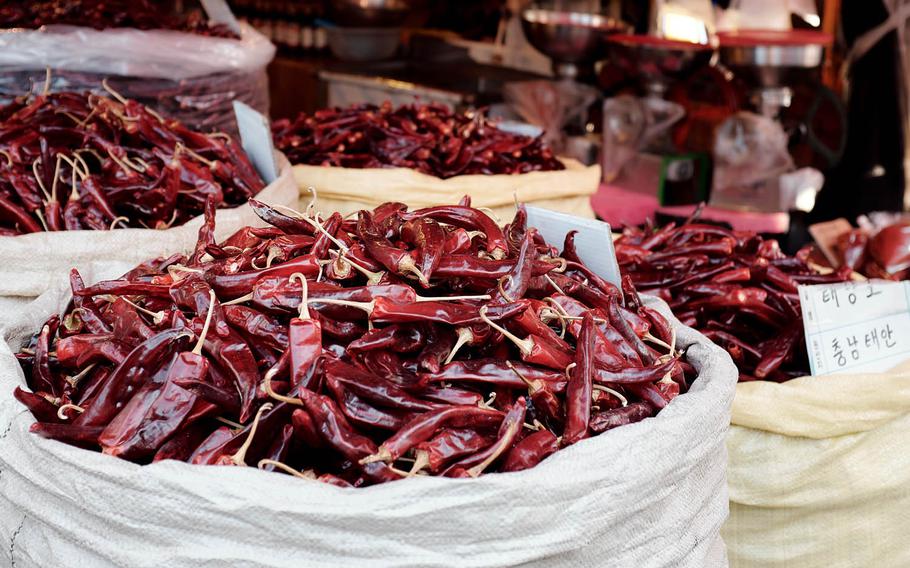 Though almost any household good is available at Tong Bak Market in Pyeongtaek, South Korea, food is the main theme. Here, customers can buy dried chili peppers in bulk. (James Kimber/Stars and Stripes) 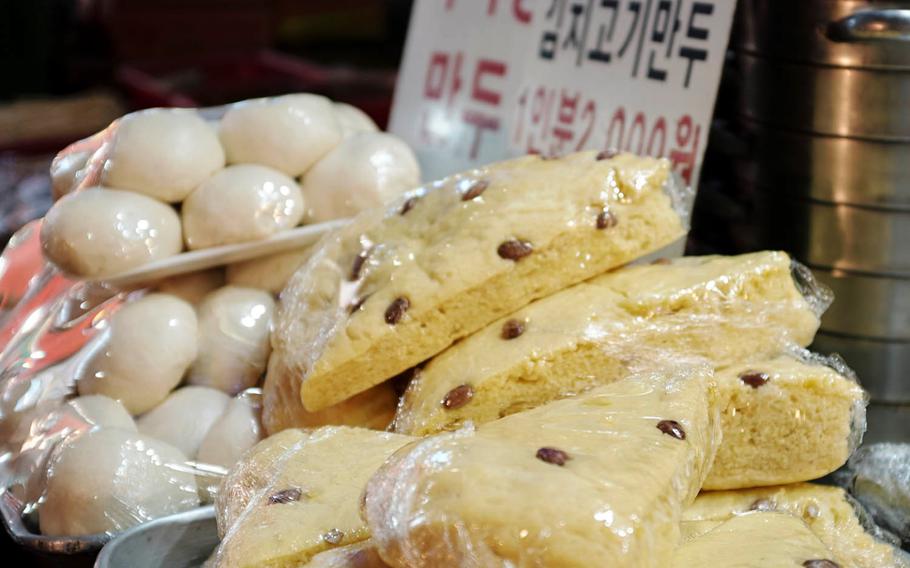 Sweets are common offerings for many booths at Tong Bak Market in Pyeongtaek, South Korea. This cake-like bread has a sweet red bean topping. (James Kimber/Stars and Stripes) 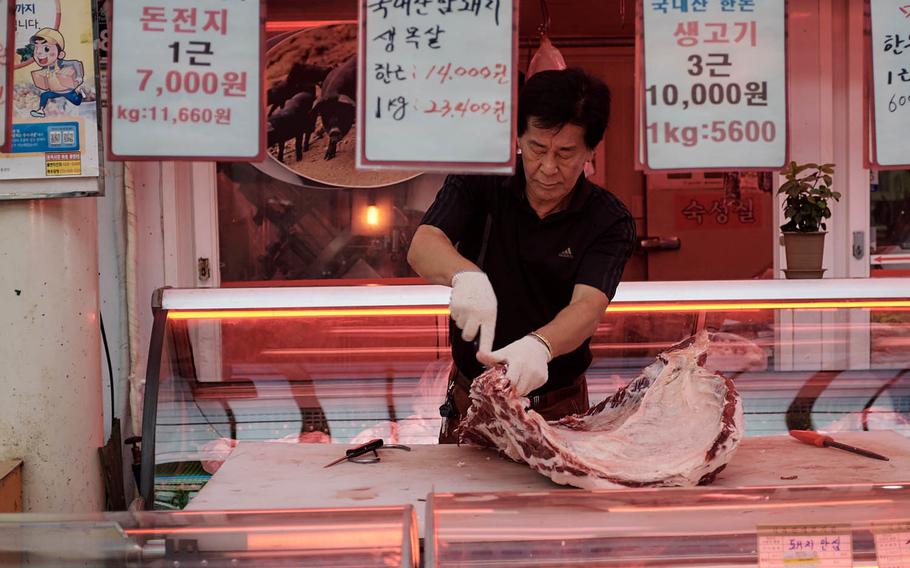 A butcher cuts a rack of pork ribs in front of his store at Tong Bak Market in Pyeongtaek, South Korea. (James Kimber/Stars and Stripes) Many booths at Tong Bak Market in Pyeongtaek, South Korea, are small restaurants serving traditional Korean snacks and fried foods. This vendor runs one of the more popular booths and serves everything from the sweet pancakes called hotteok to the Korean blood sausage soondae. (James Kimber/Stars and Stripes) 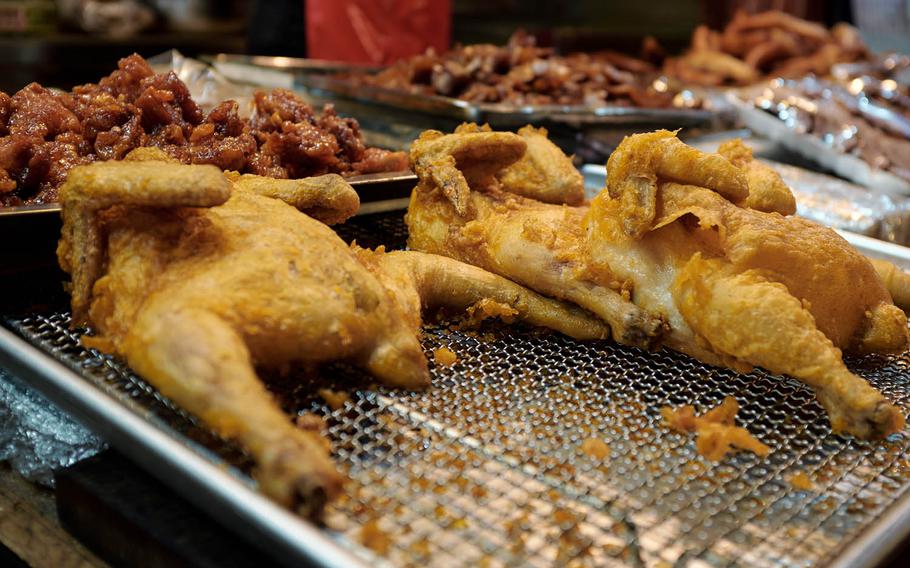 South Korea is famous for its fried chicken. At Tong Bak Market in the port city of Pyeongtaek, half-cooked whole fried chickens are on display. For less than $7, the vendor will cook a customer's chicken of choice. (James Kimber/Stars and Stripes) 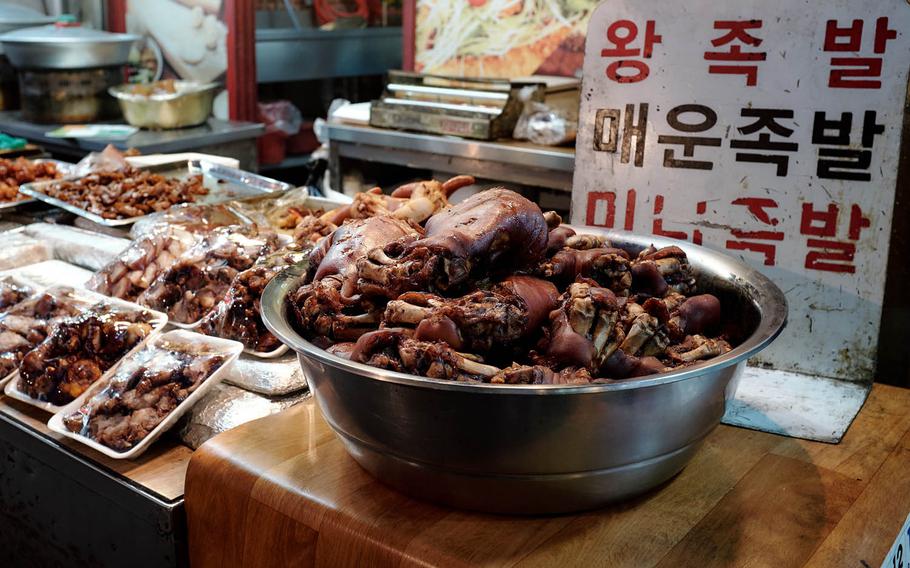 Among the more adventurous food options at Tong Bak Market in Pyeongtaek, South Korea, comes from bowls filled with pig's feet, ears, tails and snouts. These parts are commonly braised and boiled to make a dish called jokbol and eaten with an alcoholic beverage like soju. (James Kimber/Stars and Stripes)

Like many traditional Korean street markets, Tongbok offers a little bit of everything.

Boisterous street vendors compete for customers’ attention as a unique blend of aromas — from fried chicken and dried cuttlefish to roasting chili peppers and brown sugar-filled pancakes — waft through the bustling market about a 20-minute drive from Camp Humphreys or a 10-minute walk from Pyeongtaek Station.

Down one alleyway, I found kitchen supplies and cleaning products, while the next offered blankets and ball caps. Down yet another alley, the street was wet from melting ice and spraying hoses. Fishermen yelled in my direction about their discounts, and a butcher standing next to a pig’s head shouted about special deals on various cuts of meats.

Deeper into the market, sounds from sizzling grills and percolating coffee took over. One booth sold mounds of sugar-covered fried dough, while another offered pickled Korean vegetables so saturated in red spice I needed a drink of water from just passing them. Scattered across the street were older farmers peeling burdock root (ueong) and ginger (saeng-gang).

Tongbok’s streets are only for pedestrians during business hours, making it easy to stroll and browse the market’s many offerings. However, there’s also a nonchalant lawlessness about the place, proven after I was cut off mid-stride by an older man speeding on a moped. After I silently cursed him, a pleasant older woman forcefully sat me down at her booth, laughing while saying something in Korean.

The woman’s booth, made up of two stands, is one of the busiest on the street. Each of her 20-some seats was occupied, and every customer was eating, even though it was 4 p.m. — well past lunch time but before dinner — on a Tuesday afternoon. Their conversations were a seemingly gradual crescendo right up until the tab was paid.

The woman sold food that even a novice to Korean cuisine could recognize. A whole fried chicken cost 8,000 won (about $7). Corn dogs were 1,000 won (less than 90 cents). But the adventures of traveling should include eating less familiar foods, and I wanted what everyone else was having. Unfortunately, because of my extremely limited Korean — and because I made the regrettable decision not to bring a smartphone and was without Wi-Fi and translation software — I didn’t know how to order.

Fortunately, my host was just as direct as she was cheerful and began serving me whatever she felt like. In front of me were all common Korean street foods: tteokbokki, a soft, chewy rice cake in a spicy red chili sauce; soondae, a traditional sausage with a plot twist; mandu, a fried pork dumpling similar to pot stickers; and hotteok, a pancake with a brown sugar syrup inside, a description that gives it no justice because it’s one of the greatest foods in existence.

She then held up four fingers, said something in Korean and flashed the international hand sign for “Four bills, please.” I quickly handed over 4,000 won ($3.50), and gave her a thumbs up, hoping it meant the same thing in Korea as it does in the States.

Soondae really caught me off guard. It’s an almost black sausage stuffed with rice noodles, barley and blood. Anyone who has eaten blood sausage will immediately recognize the iron-rich taste, chewy texture and somewhat grittiness associated with other innards.

It’s quite common in Korea; I must have seen at least 10 other Tongbok shops selling a version. However, I was flying blind and didn’t expect a mouthful of coagulated, boiled blood and pig intestine.

After that initial surprise, I began to enjoy it, especially when accompanied with the spicy kick from tteokbokki, a common pairing in the Korean snacking community.

While Tongbok Market might seem quite far from the beaten path, just a few minutes from where I was sitting there are busy coffee shop chains, fast-food restaurants, a popular college and a six-way traffic circle that never seemed to have an accident.

Though the market is far from a hidden gem, you won’t see many people there who aren’t from the neighborhood, which only adds to its local charm.