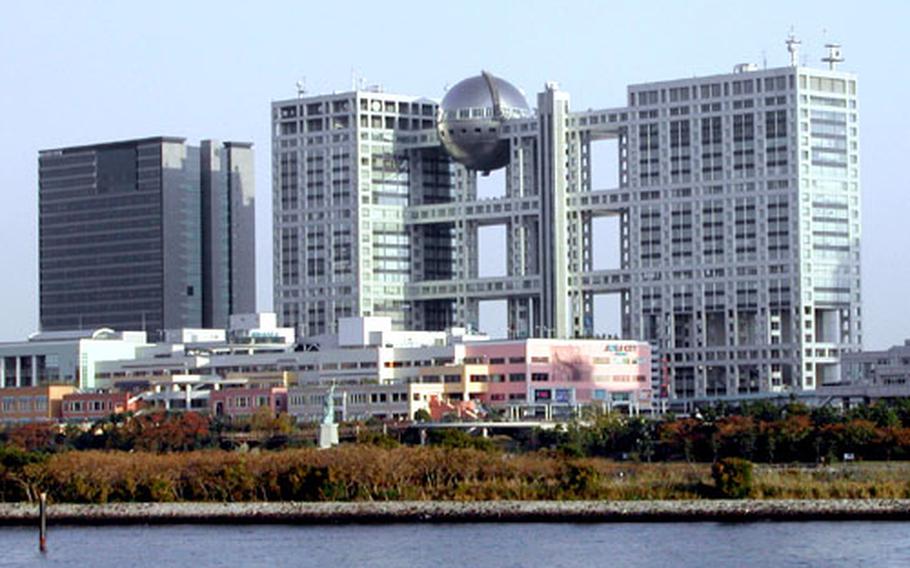 Located near Yurikamome Odaiba Kaihin Koen Station is the landmark building of Odaiba — the Fuji Television Broadcasting building designed by Kenzo Tange. The ball on top of the building is an observation deck. (Hiroshi Chida / S&S)

Located near Yurikamome Odaiba Kaihin Koen Station is the landmark building of Odaiba — the Fuji Television Broadcasting building designed by Kenzo Tange. The ball on top of the building is an observation deck. (Hiroshi Chida / S&S) 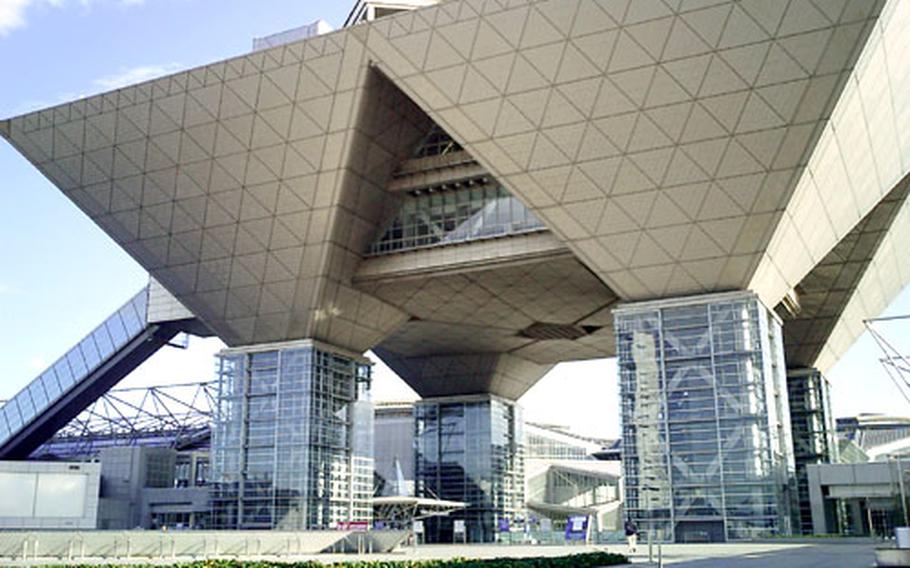 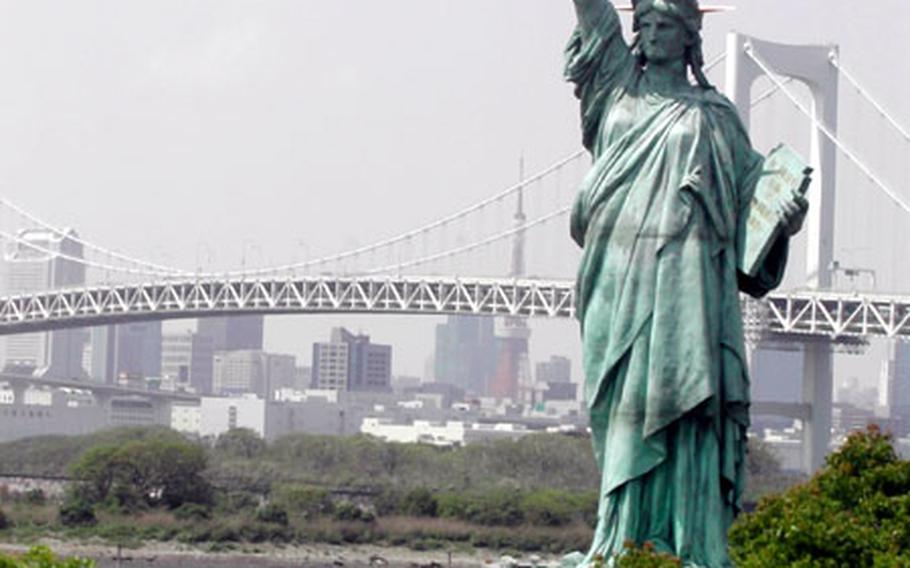 A replica of the Statue of Liberty at Tokyo Harbor. (Hiroshi Chida / S&S) 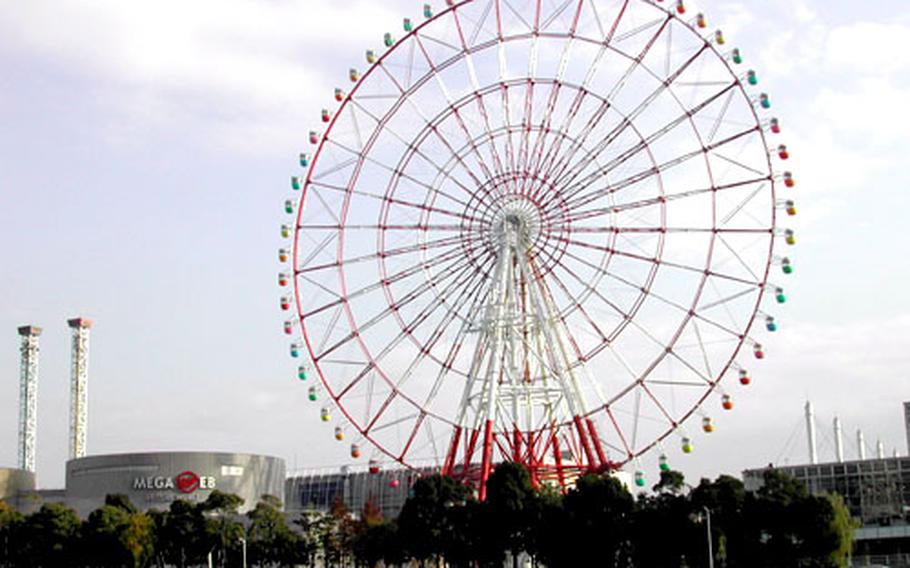 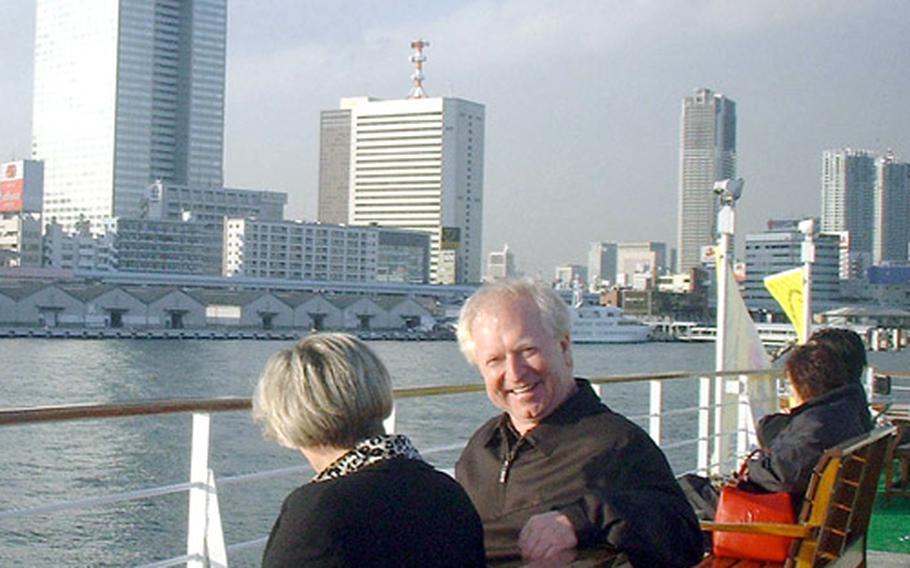 The transformation of Tokyo&#8217;s Odaiba area in Tokyo Bay is a big surprise &#8212; even for people who have lived in Tokyo all their lives.

The Odaiba area is really just reclaimed land the Tokyo metropolitan government dumped sand and rocks on after salvaging and extending the Tokyo Bay piers in 1963; ordinary Tokyo residents rarely visited the area prior to the city&#8217;s construction.

In the 1980s, under the leadership of then-Tokyo Metropolitan Governor Shun-ichi Suzuki, the government wanted to build a major economic hub on the reclaimed land. It was a time of great economic growth, and Japanese banks happily lent the money, believing land value would never fall.

The &#8220;conductorless&#8221; new transit system &#8212; the Yurikamome line &#8212; opened in 1995 connecting Shinbashi to Ariake. The Rinkai Line opened in 1996 from Shinkiba to Tokyo Teleport. The line was further extended to the JR Osaki Station connecting to the Saikyo Line in December 2002, making it easy for commuters to come to Odaiba.

Though the exposition was canceled, shopping malls opened, various leisure facilities were built and business offices were set up. This is why Odaiba has an artificial and futuristic flavor and looks like a playground, complete with Ferris wheel.

Odaiba is an artificial city built upon a totally new concept, said Makoto Saito of the Tokyo Governor&#8217;s Office. That is the difference from Tokyo&#8217;s other sub-centers such as Shinjuku, Ikebukuro and Shibuya, which grew upon already existing cities.

Saito said he hopes Odaiba will continue to grow and become a new type of city in Tokyo with a good mix of business and leisure facilities where people will visit.