Tokyo: Have a blast in Odaiba 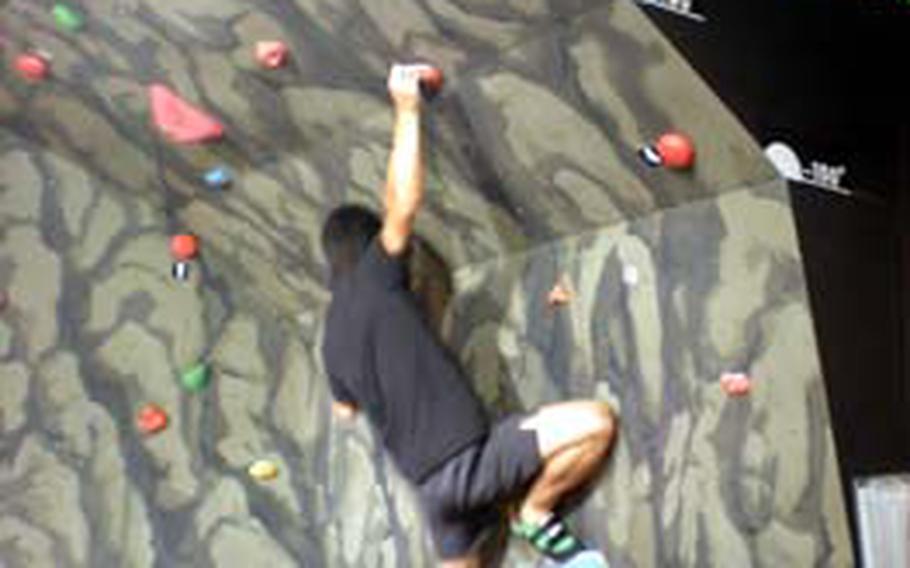 At Muscle Park in Odaiba, a man races to climb to and then press numbered buttons in a limited amount of time. Muscle Park offered several athletic venues as well as games that challenged the mind. (Courtesy of Marjorie Newell)

At Muscle Park in Odaiba, a man races to climb to and then press numbered buttons in a limited amount of time. Muscle Park offered several athletic venues as well as games that challenged the mind. (Courtesy of Marjorie Newell) 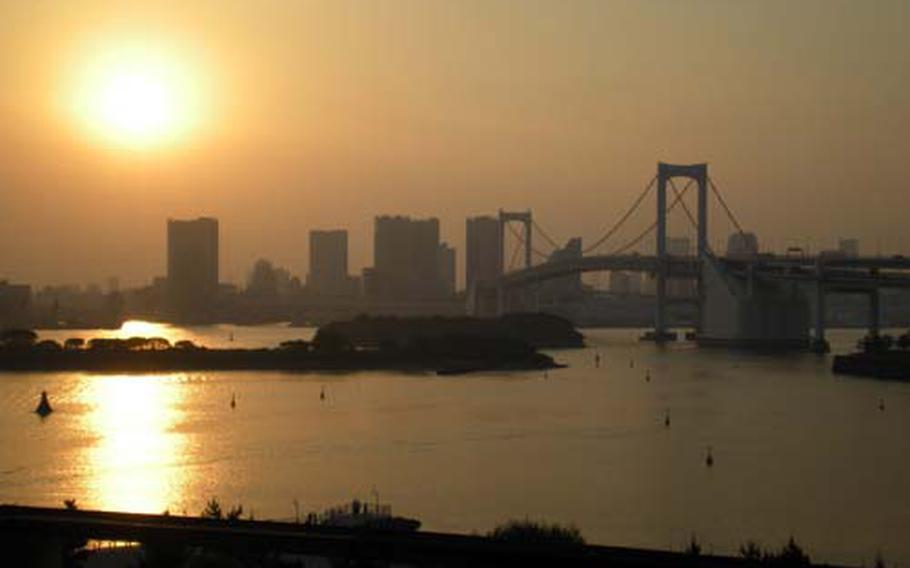 A beautiful view of Tokyo Bay and metropolitan Tokyo from one of Decks&#39; several restaraunts. (Courtesy of Marjorie Newell) 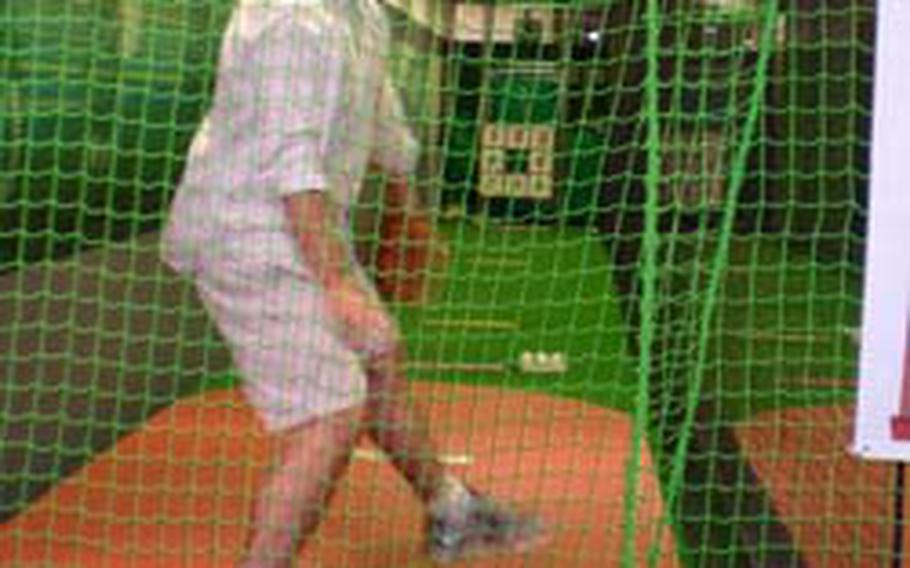 At Muscle Park in Odaiba the author takes aim at his target during a pitching competition. Muscle Park offers a variety of athletic and mental challenges that is fun for the whole family. (Courtesy of Marjorie Newell) 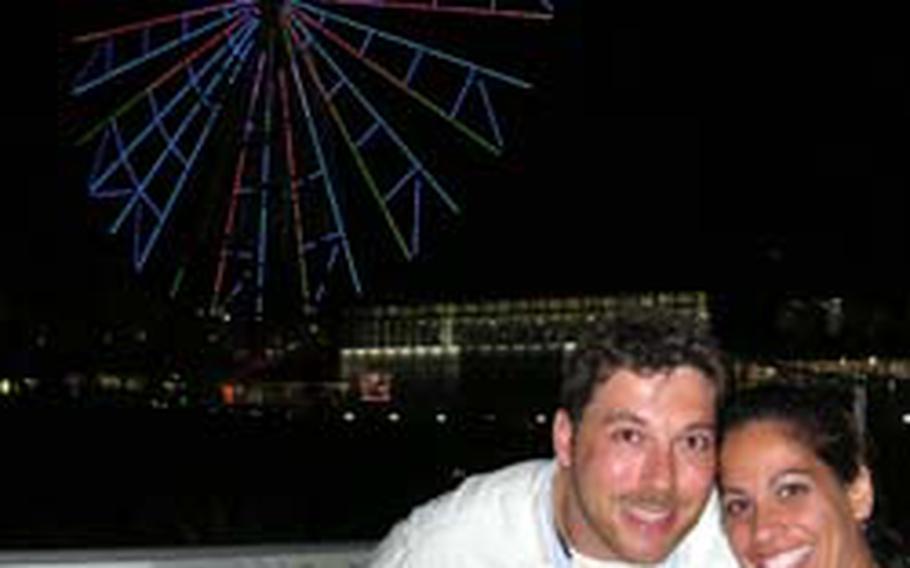 The author and his family stand before the Odaiba Ferris Wheel. The 377-foot-high wheel was the world’s biggest when it debuted in 1999. (Paul Newell / S&S) 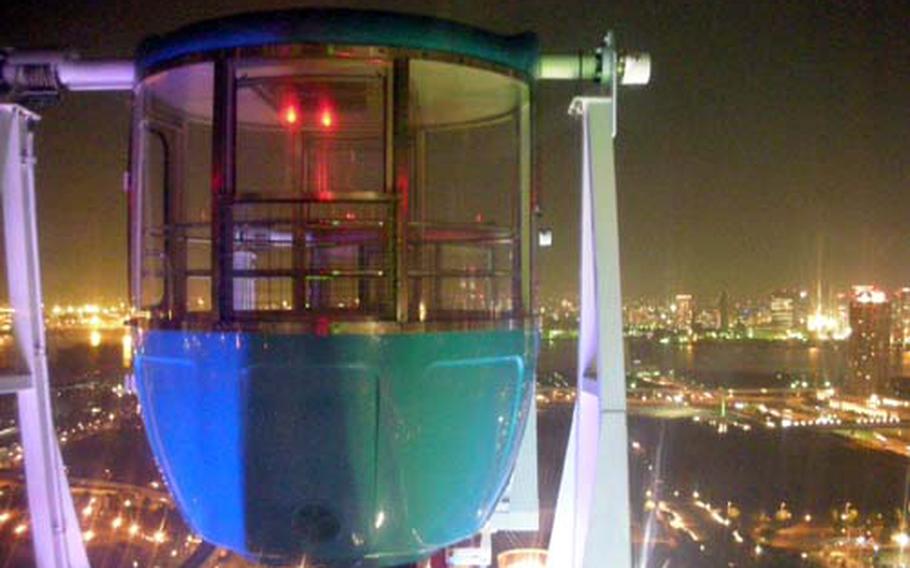 The 370-foot view from atop the Odaiba Ferris Wheel affords passengers a great view of metropolitan Tokyo. (Paul Newell / S&S)

Just a sampling of the fun things to do at Odaiba, a diverse day trip unlike anything you&rsquo;ll find on the Kanto Plain. Think Coney Island, then substitute hotdogs and graffiti for clean boardwalks and sushi. Now add great shopping and you begin to get the picture.

Originally, the Odaiba area was a series of island fortifications built during the 19th century to stop the Western Black Ships from entering Tokyo Bay. Today, the area has a mockup Statue of Liberty that stands before the Rainbow Bridge, so obviously the attempt to defend the city from Western influence didn&rsquo;t follow script. The Tokyo government was successful, however, in using big loans during the 1980s economic boom to transform Odaiba into the entertainment hub it is today.

We took an enjoyable 20-minute scenic river cruise from Hinode Pier to Odaiba that offered a great glimpse of the Rainbow Bridge and other Tokyo Bay sights. After arriving we went for some eats at Decks, a mall with several boutiques, cafes, stores, restaurants and other attractions. After getting our fill of Japanese fare and crepes that followed, exercise was much needed. You can find it at Muscle Park.

Located at Decks, Muscle Park consists of 18 physical and mental challenges. I hadn&rsquo;t pitched a baseball in 20 years, but that didn&rsquo;t stop me from trying to relive glory days long since passed during a pitching target game. Out of five attempts, I only hit the strike zone once. My other throws were firmly grounded in turf. Humbled, I joined my family for a mentally challenging game in which we had to put numbers in order on a touch screen in a limited amount of time. Since the games are expensive, we had plenty of fun just watching others test their skills on other games and a rock climbing wall.

We mulled checking out the dog rental shop, but never made it. It&rsquo;s located down the boardwalk just past Lady Liberty and is something I&rsquo;d wanted to see with my own eyes. Even in dog-crazy Japan, I had found it hard to believe that you can rent man&rsquo;s best bud by the hour. Seemed like a story with more bark than bite until my friend Karen and her in-laws saw the shop and told me all about it a few weeks before we went.

Karen and her crew also went for a fish pedicure at Palette Town, another Odaiba entertainment complex located on the other side of the tunnel that connects it to Decks. I was told the fish pedicure joint was located by the game arcade near the Odaiba Ferris Wheel. The pedicure "feels like someone is tickling your feet," Karen told me. "They tell you not to jerk around too much so you don&rsquo;t scare the fish." The experience and finished product &ndash; noticeably softer feet and the removal of her calluses &ndash; was well worth it, she said.

The game arcade was also lots of fun. A tidy sum was spent trying to win a Love-a-Lot Care Bear from a claw grab game that probably was made for 25 cents in China, but it was fun to test (and subsequently lose) our fortunes. We also noticed lots of eclectic- looking youth hanging around.

After leaving the arcade without a stuffed friend, we hopped on the Ferris wheel, which at 377 feet high was the world&rsquo;s largest when it opened in 1999. The 16-minute ride offers a tremendous view of the illuminated Tokyo Tower and Rainbow Bridge as well as a great glimpse of much of the rest of the metropolis, and brought a memorable close to a fantastic day.

I guess what separates Odaiba from anywhere else we&rsquo;ve been to in Tokyo is the wide variety of activities in such a concentrated area. Asakusa has history. Ginza has shopping. Harajuku is a place to gawk at people. I&rsquo;ve taken visitors to Tsukiji Fish Market to watch that craziness and to Mori Tower for unbelievable views of the city. After three years, though, Odaiba tops the list of best ways to spend a day in Tokyo because it offers a little bit of everything. Kids, adults, and even the older folks will find a full plate of good times at Odaiba. All it takes is a penchant for fun, though a pair of feet that could sand wood certainly won&rsquo;t hurt the cause.