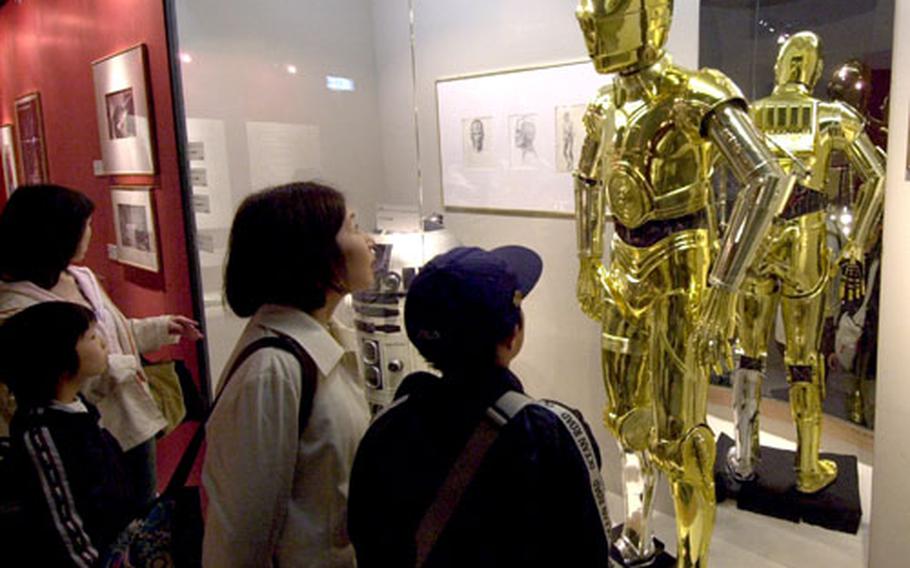 See many displays with costumes and models used in the movies and concept art. (Jim Schulz / S&S)

See many displays with costumes and models used in the movies and concept art. (Jim Schulz / S&S) 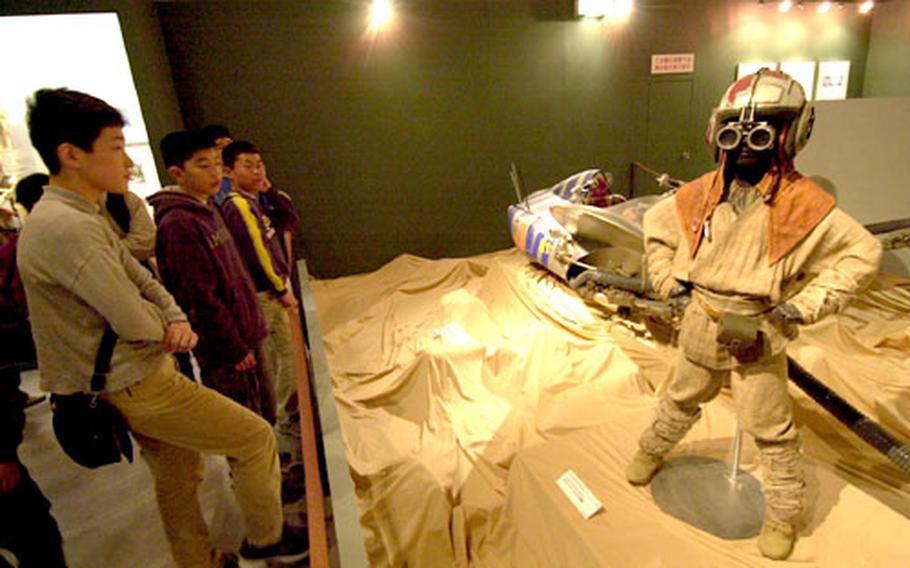 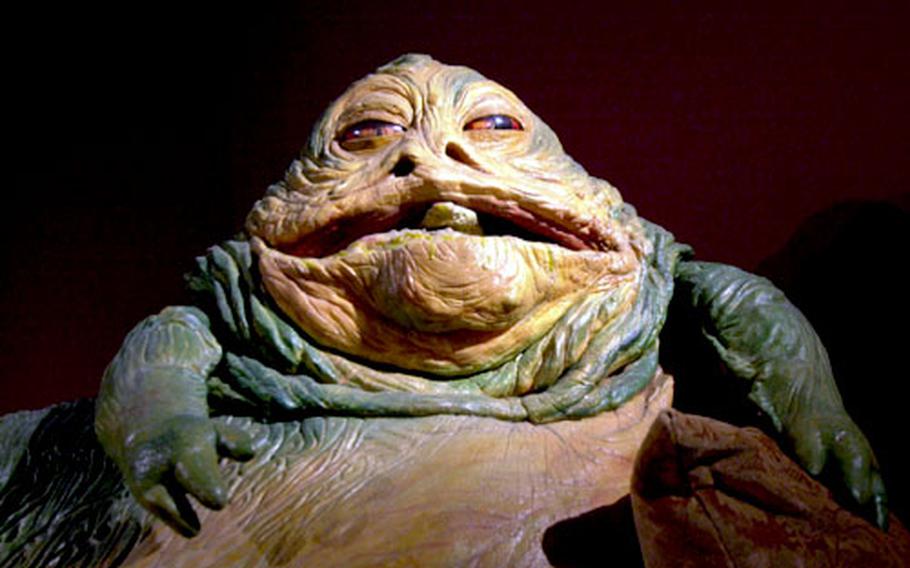 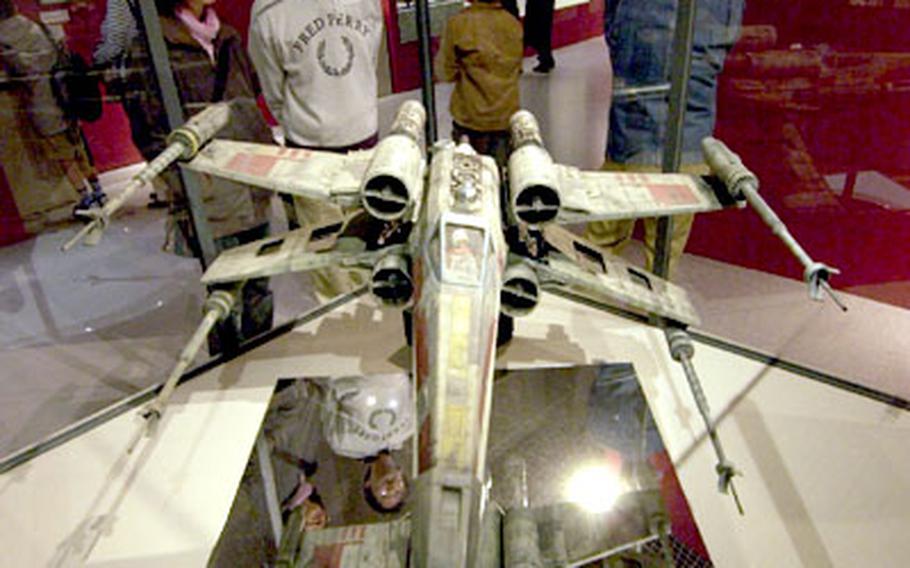 A couple looks at a Rebel X-Wing Fighter on display. (Jim Schulz / S&S) 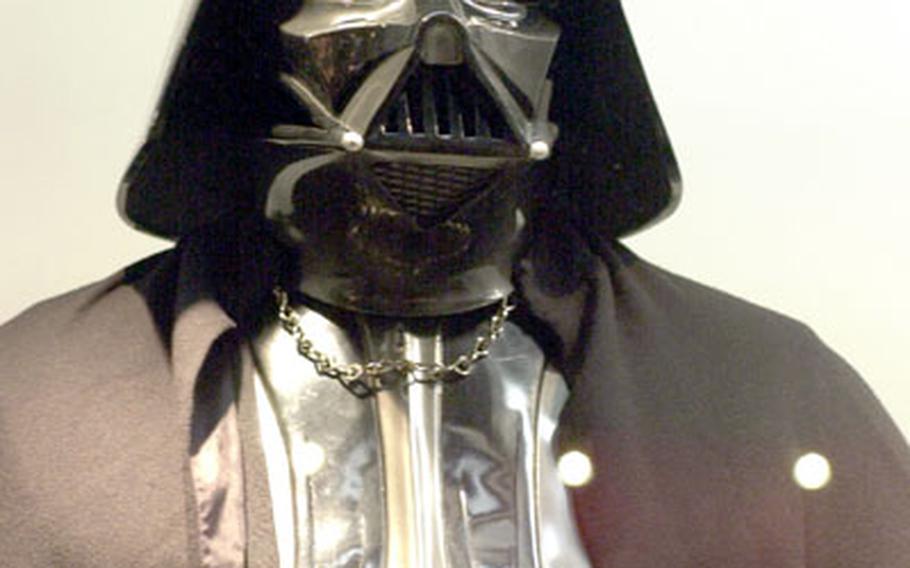 TOKYO &#8212; Could Luke Skywalker and Darth Vader really battle it out with light sabers?

What&#8217;s the possibility of speeder bikes ever being ready for commercial sale?

In short: could all the cool gizmos and gadgets that made the &#8220;Star Wars&#8221; franchise famous really work?

Twenty years after the series&#8217; premier, a Tokyo museum exhibit is exploring how the films creators&#8217; fictional world is approaching reality.

The &#8220;Star Wars Science and Art&#8221; exhibit now at Tokyo&#8217;s National Science Museum explains some of the technology along with displays of items actually used in the films.

The museum has brought together about 400 items used in the films.

Since the opening last month, the exhibit has attracted about 3,000 visitors a day and set a museum record for an opening weekend attendance.

At the exhibit, visitors are welcomed by a full-scale C-3PO and R2-D2 while the &#8220;Star Wars&#8221; theme song plays in the background. The exhibit is divided into sections by films from oldest to newest, starting with the original film, which is now dubbed &#8220;Episode IV.&#8221;

Full-scale models of Chewbacca, Yoda and Darth Vader are visible. Queen Amidala and Anakin&#8217;s costumes are displayed, as well. Models accurately reproducing every detail of the X-wing starfighter, Millennium Falcon and battle droids also are displayed.

Many visitors are long-time &#8220;Star Wars&#8221; fans, but museum organizers said they were surprised to see so many families with small children.

&#8220;I am more than happy if we could awaken peoples dream and yearning to the future world, and if we could further raise peoples interest in science and art,&#8221; said National Science Museum Director Masamine Sasaki in his message to visitors.

The organizers hope this exhibit will spike the younger generations&#8217; interest in science and inspire them to become scientists, said exhibit coordinator, Hiroyuki Tsuchiya.

Without trying to intervene with the displays and image of the films, scientific explanations of the principals and technologies seen in the movies &#8212; as well as the possibility that the technology and principals might appear in the real world &#8212; are explained by curators who analyzed the films closely.

One of the items that draws attention is a full-scale model of the 10-meter pod racer driven by Anakin Skywalker in &#8220;Episode I.&#8221; It shows scratches and stains from crashes sustained while filming. The exhibit explains how this could have been made, and how likely they would be in a real world from the current science standpoint.

The use of special effects is explained with written exhibit descriptions and video clips. For example, a clip explains how variously colored cotton swabs were turned into the gigantic pod race audience from &#8220;Episode I.&#8221;

There are computers placed throughout the exhibit also explaining the scientific view of the movie.

Although most displays and audiotapes that are rented out at the museum are in Japanese, to see the actual sets and models from the film is worthwhile.

The museum shop concludes the exhibit with postcards, T-shirts, light saber toys and models of different characters on sale.

Throughout the exhibit, scenes of the films are shown. The exhibit can inspire visitors to see the movie before and after they see it.