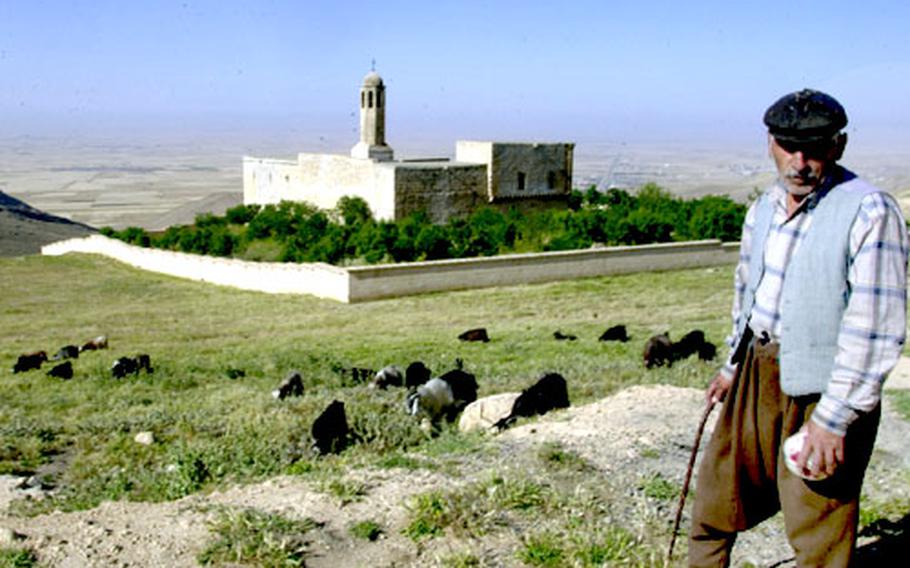 A shepherd tend his flock outside the walls of a tranquil Syrian Orthodox monastery at Mardin, Turkey. (Terry Boyd / S&S)

For U.S. military personnel in Turkey, the best way is to rent a vehicle outside Incirlik Air Base at Izmir Air Station or in Ankara and drive. The roads across Turkey are good and well- marked. There are gas stations even in the remotest sections.

For everyone else, there are flights from Frankfurt Airport to Ankara every day. From Ankara, it&#8217;s about an hour flight to Diyarbakir, which is 50 miles north of Mardin. From Diyarbakir, it&#8217;s an hour&#8217;s drive to Mardin, and perhaps two hours to Sanliurfa.

Mardin, and to a lesser degree Sanliurfa, are near an area where Turkish troops and Kurdistan Worker&#8217;s Party terrorists fought a 17-year civil war, and just a short drive from both the Syrian and Iraqi borders. Go east or south of Mardin and you enter a Turkish military security zone, where you had to have &#8212; until last summer &#8212; a military escort. As late as last May, Jandarma (Interior Police) and Turkish Army troops manned checkpoints beginning at Nusaybin, and yours truly spent several fascinating days in custody trying to reassure very polite Turkish secret police and soldiers that he was not a CIA agent or PKK sympathizer.

On Wednesday, the Turkish government closed its border crossing into Iraq at Habur Gate, which is only about 50 miles east of Mardin, and just outside the towns of Cizre and Salopi. So access to the area may be limited until the war ends. While major cities near Mardin are safe, including Sanliurfa, Gaziantep and Diyarbakir, I wouldn&#8217;t go east to PKK strongholds such as Siirt, Bingol and Batman till trouble blows over.

The price of a Turkish tourist visa for Americans rose to $65 on June 1, 2002, from $45, then to $100 last Nov. 1. The fee increases &#8220;are based on reciprocity,&#8221; said Katharine Nance, a spokeswoman at Turkey&#8217;s consulate in Chicago. In other words, when the United States charges Turkish citizens more for tourist visas, Turkey raises what it charges Americans the same amount.

If you&#8217;re planning several trips, you can get a multiple entry visa at a Turkish consulate before you travel, Nance said.

The fee must be paid in cash, in U.S. dollars or euros. The Turkish government does not take Visa, Mastercard or American Express &#8212; or Turkish lira. However, if you don&#8217;t have any cash, some customs entry officials will let you go to the money machines in the airport.

U.S. troops trying to avoid paying the tourist visa MUST have black-stamped NATO orders and DOD identification. Otherwise you&#8217;ll be put right back on the plane you came in on &#8212; and that&#8217;s if you&#8217;re lucky. You also might be held for several hours, as several military folks lacking NATO orders were last year.