Thorn in southern Netherlands is known as the "white village" because of the white-painted brick houses in the old section of town by the gray, 10th-century church. The look dates back to the Napoleonic era and is the main reason the small village attracts so many visitors. The village also is home to two of the world’s most accomplished wind orchestras. (Photos by Kevin Dougherty/S&S)

Thorn in southern Netherlands is known as the "white village" because of the white-painted brick houses in the old section of town by the gray, 10th-century church. The look dates back to the Napoleonic era and is the main reason the small village attracts so many visitors. The village also is home to two of the world’s most accomplished wind orchestras. (Photos by Kevin Dougherty/S&S) 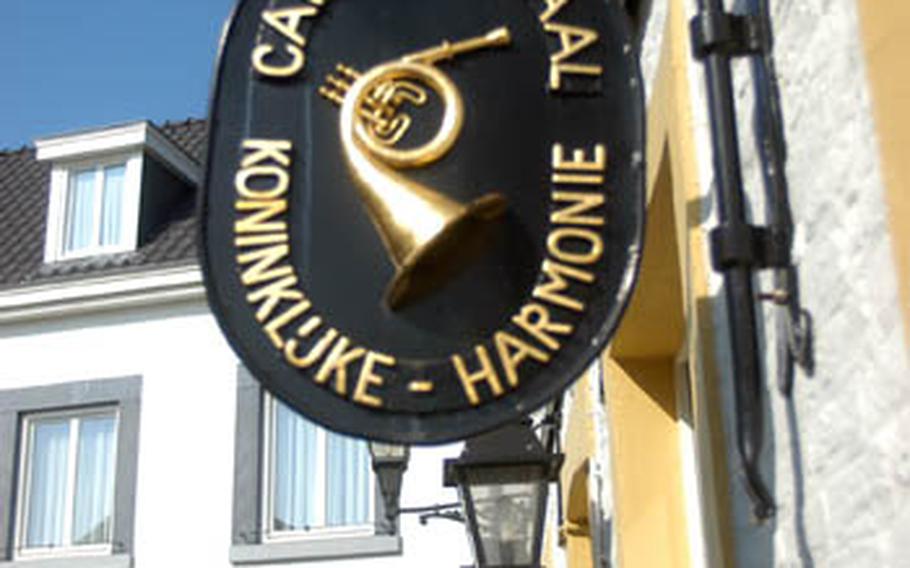 A popular attraction in Thorn is De Pannekoekenbakker, a pancake house that offers scores of different pancake dishes, from one with mixed fruit and whipped cream to a Mexican pancake with mincemeat, corn and cheese sauce. (Photo by Kevin Dougherty/S&S)

North of Maastricht, not far off the main roadway to Amsterdam, lies a small Dutch town known for music, pancakes and an old abbey church surrounded by blocks of whitewashed houses and shops. But it&rsquo;s the last feature, the bright brick buildings, that&rsquo;s the primary draw.

"That&rsquo;s why they come to Thorn," said Chantal Pols, who works at the town&rsquo;s museum. "Most people, at least in the Netherlands, know of the &lsquo;white city.&rsquo; "

Situated on a gentle knoll overlooking the River Maas, or the Meuse. as it is also known, Thorn first came to prominence as the home of a pre-eminent abbey occupied by Benedictine nuns. In later centuries, the daughters of the aristocracy went to the abbey to mature until matrimony.

The old abbey, which dates to the 10th century, was the dominant employer in town. It consisted of many buildings, structures that fell into disrepair when French forces conquered the region in the late 1700s.

When the French dissolved the abbey, they leveled the local economy as well.

Poverty stricken, many people moved into the abandoned buildings. That triggered a tax tied to the size of windows and fireplaces, Pols said.

"To avoid the high taxes, the habitants bricked them up," Pols explained. "To cover up the &lsquo;scars,&rsquo; they plastered the walls white."

As you stroll the gray cobblestone streets of Thorn, evidence of that act of defiance lives on &mdash; house by house. Visually, it&rsquo;s a pleasing scene.

At street level, there are hints here and there of Thorn&rsquo;s rich musical history. It stretches back well into the 1800s. A town of about 2,500 people, Thorn has two wind orchestras, several choirs and a music school.

Eighteen-year-old Jord Kierkels played the clarinet in one of the orchestras for six years before he bowed out for school and girls. He said having two award-winning orchestras, the result of a split in the 1860s over a philosophical difference, is a blessing, even if it&rsquo;s also a rivalry.

"The competition really pushes them to be the best in the world," Kierkels said.

After hoofing it up and down Thorn&rsquo;s attractive avenues, visitors would be wise to pull up a chair at one of the town&rsquo;s splendid restaurants. A favorite of many is De Pannekoekenbakker, directly across the street from the abbey church. Its menu offers more than 200 pancake dishes.

"We do get Americans from across the border, from the military bases," said waiter Wouter Frenken. "Here in Holland, we eat pancakes in the evening as a meal."

Frenken had a humorous story to tell about a renovation project at the restaurant several years ago. Within a wall, a construction crew found an old note tucked between some bricks. It turned out to be a doctor&rsquo;s handwritten prescription, in which he advised his patients to drink wine at various times during the day.

"I wish we had doctors like this nowadays," Frenken said before he headed out to serve his clients.

Directions: Thorn is located off of A2/E25 north of Maastricht. From Maastricht in southern Netherlands, drive north toward Eindhoven and Amsterdam. The exit for Thorn on A2 is Exit 41. At the top of the ramp turn left, continue on N273 for a couple of miles until reaching a sign for Thorn directing visitors to turn left onto Thornerstraat. Look for signs for the old village center.

Costs: A self-guided tour of the museum and church is 5 euros for adults, 2.50 euros for ages 6-16. A family ticket &mdash; two adults and up to four children &mdash; is 15 euros.

Food: The restaurant De Pannekoekenbakker is on Bogenstraat across from the church abbey. With more than 200 kinds of pancakes on the menu, this is one establishment worth visiting. The hot chocolate with whipped cream is tasty. Another solid option is the Lunchroom Kampioenbakker Housmans, founded in 1898 and situated near the visitors bureau and museum.

Information: The town&rsquo;s Web site &mdash; www.thorn.nl &mdash; does not have an English-language version. However, most employees at the tourism office on a little cobblestone plaza called Wijngaard speak some English.