The icemen cometh to Italian villages 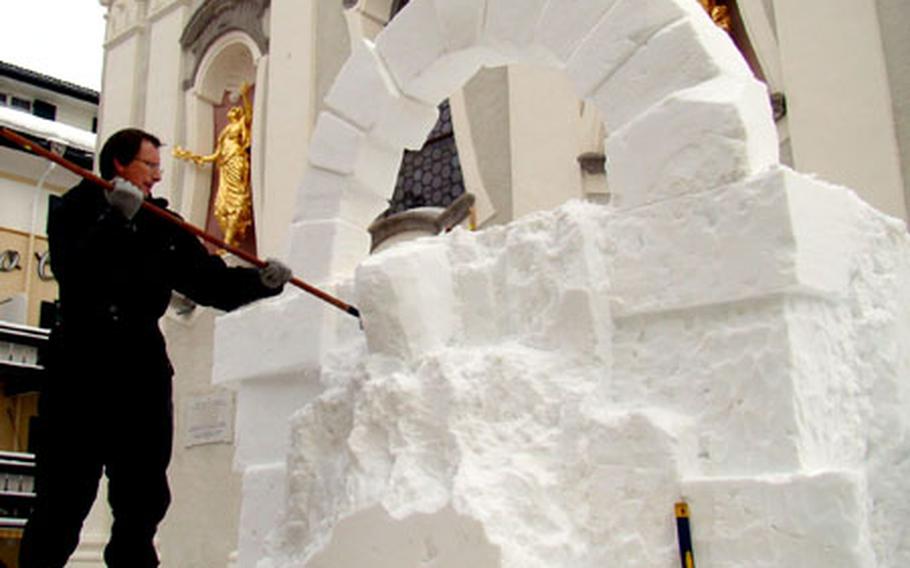 With the San Candido town church as a backdrop, a team member from the Untied Kingdom works on “Flight of Daedalus.” (Jim Sajo / Special to Stripes)

With the San Candido town church as a backdrop, a team member from the Untied Kingdom works on “Flight of Daedalus.” (Jim Sajo / Special to Stripes) 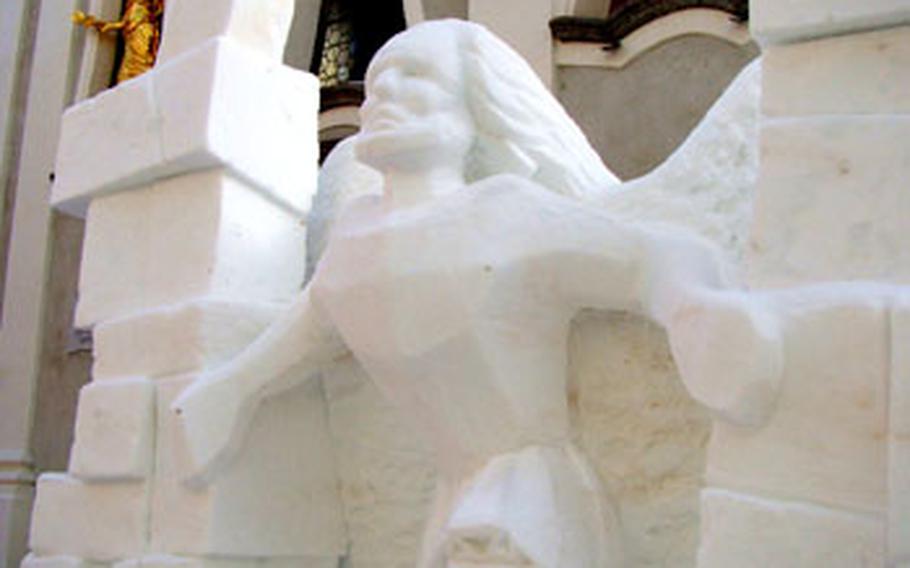 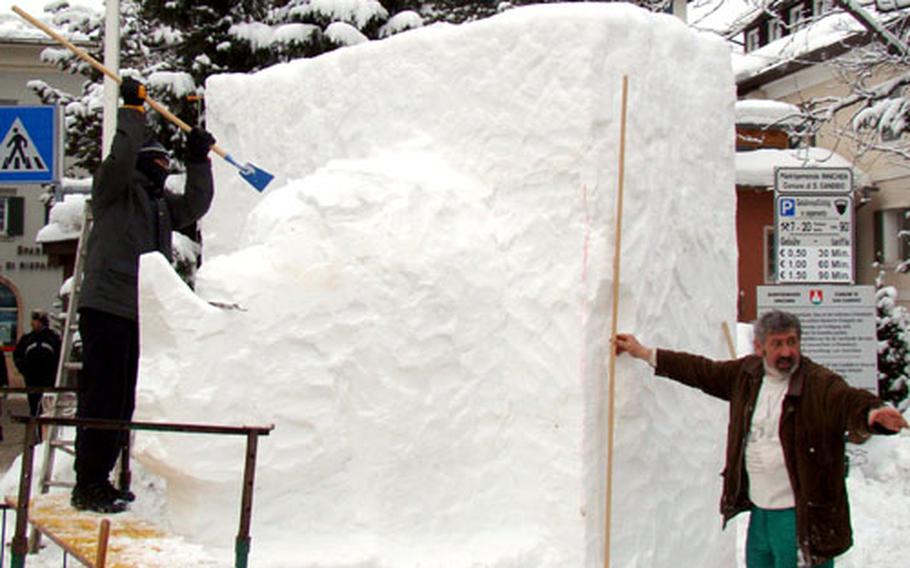 Braving cold temperatures, one team member of the Italy I team checks measurements while another continues to carve “A Book is Almost Real” at San Candido. (Jim Sajo / Special to Stripes)

What do you get when 10 teams of sculptors spend six days in the middle of winter turning huge blocks of snow into pieces of art?

The answer is on display in the Italian villages of San Candido and San Vigilio, which last month held their 19th annual International Festival of Snow Sculpture.

According to Michael Lanz, an event organizer, each year a panel of citizen judges announces the dates of the festival (it is always held in mid-January) and selects the competitors. The judges start by consulting an extensive database of previous participants and mailing them invitations. Hundreds of three-person teams respond, sending drawings of their planned frozen masterpiece. From the applicants, the judges select 10 teams.

The chosen are offered travel to the two small towns and lodging during the days of the competition. Each year, two of the teams come from art schools, while professional and freelance artists make up the other competitors. Each team creates two sculptures, one in Candido and the other three days later in San Vigilio.

Hanna Erharter, tourism director for San Candido and principal organizer of the snow festival for her town, said each team starts with a massive block of tightly packed artificial snow. Each block is 3 by 3 by 3 meters and weighs in excess of 15,000 kilograms &#8212; nearly 35,000 pounds.

Then the artists get busy. First, they carefully draw cutting lines into the ice using colored markers. The work is done with painstaking precision, with the artists frequently halting the drawing for measurements down to the centimeter for accuracy. The process generally takes all morning.

After lunch, teams return with shovels, picks, putty knives, chisels and other tools of their trade &#8212; along with water to preserve their works. As they cut into the packed snow, teams must redraw the design, slowing progress. Carving must be completed within 72 hours, when the judging begins.

This year&#8217;s frigid flights of fancy included a frozen "Kung Fu Panda," an icy "Color Tube" (clearly from one of the art school teams) and a "Goat as Gardener." The sculptures will remain on display &#8212; illuminated at night &#8212; until they melt.

In the past, the same panel that selected the teams also performed the formal judging. In recent years, however, they have relinquished that responsibility to passers-by. Apparently, citizens objected to the choices made by "experts." Today, ballots are available to anyone at each sculpture or at the village tourism office.

This year, the home teams did well. In the Candido competion, Italy II won for its "Kung Fu Panda" sculpture, while Italy I finished second with "A Book is Almost Real," featuring a 6-foot rhinoceros charging through a book. Third place was awarded to the team from the United Kingdom for its "Flight of Daedalus." In San Vigilo, Italy II took second with another version of the Panda and the art school from Italy&#8217;s South Tirol finished third. The team from Latvia was the winner.

Winning teams receive a certificate to take home, along with the satisfaction of knowing they are the best of the year. While there&#8217;s no cold cash involved, it&#8217;s enough to keep the artists and spectators coming back.

Know and go ...San Candido and San Vigilio are in the eastern corner of Italy&#8217;s breathtaking Dolomite Mountain range. Both are just south of Highway 49 in northeast Italy. From Autostrada 22, the exit at Bressanone intersects with Highway 49. San Vigilio is about 25 miles east of the autostrada, San Candido is another 15 miles, almost on the border with Austria.

When driving through Italy&#8217;s mountainous regions during winter months, carrying snow chains in your car is mandatory. A reflective vest and warning triangle are always required.

For more information on the International Festival of Snow Sculpture, including past winners, see www.snow-festival.com. There is an English version.