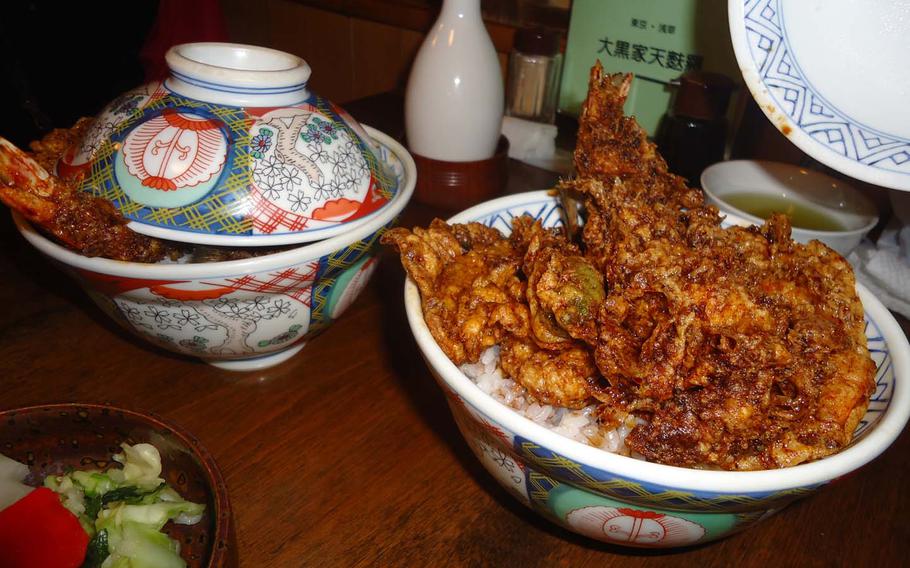 Tempura Daikokuya’s special tempura over rice, called “tendon,” is unfurled on the table. The brown sauce that colors it is called “kaeshi,” and is made from soy, “mirin” (a type of rice wine), sugar and broth derived from dried bonito. (Matthew M. Burke/Stars and Stripes)

Tempura Daikokuya’s special tempura over rice, called “tendon,” is unfurled on the table. The brown sauce that colors it is called “kaeshi,” and is made from soy, “mirin” (a type of rice wine), sugar and broth derived from dried bonito. (Matthew M. Burke/Stars and Stripes) 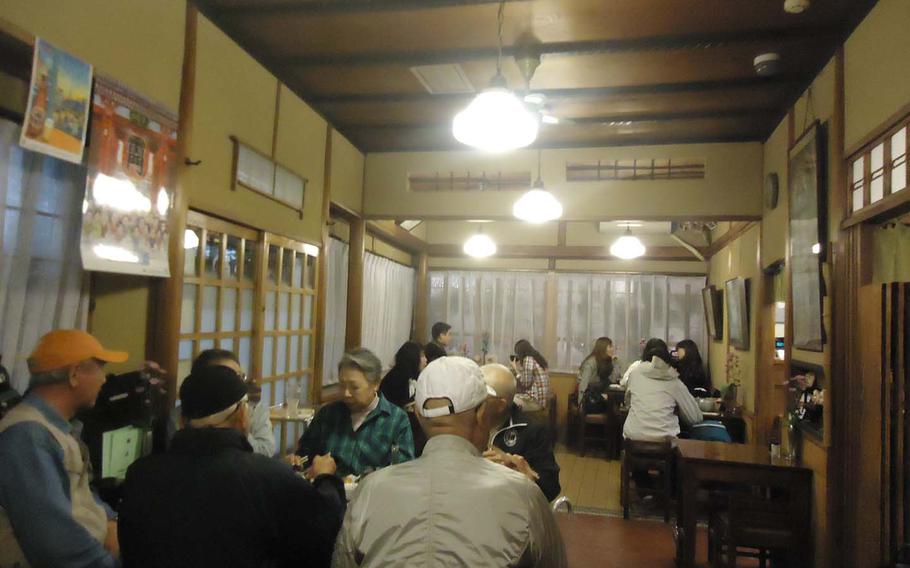 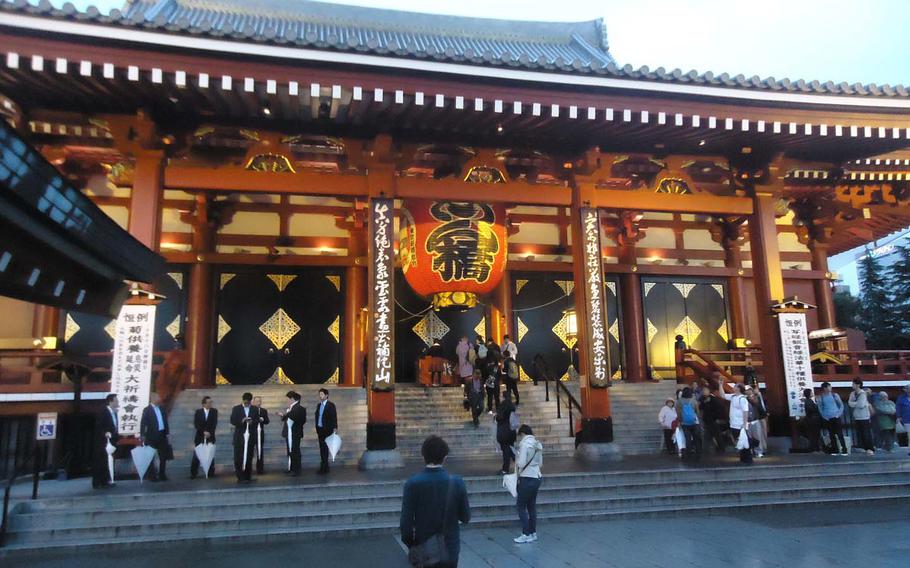 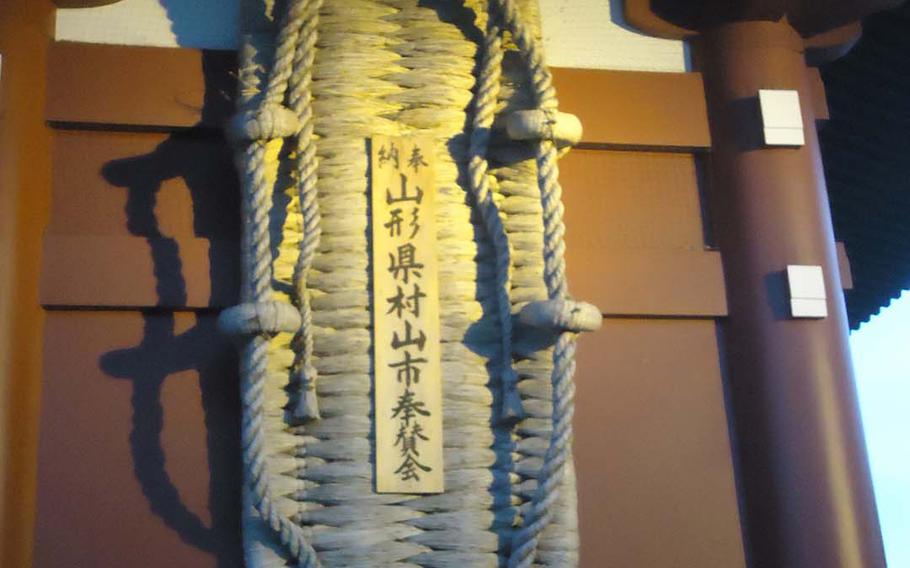 If the Bodhisattva Kannon — benefactor of Asakusa’s Senso-ji temple — is the compassionate Buddha that relieves beings of their suffering, then the nearby Tempura Daikokuya restaurant surely works in concert to relieve them of their hunger.

Just a stone’s throw from Tokyo’s oldest temple, Daikokuya is as big an attraction for global foodies as the temple is for Buddhists seeking miracles and protection.

The crispy fried and sauced shrimp, fish and vegetables were first served on a bed of noodles that evolved into rice, a dish affectionately referred to as tendon.

“In those days, soba or tempura were sold at food stalls, like today’s fast food,” Masue Maruyama said, adding that Daikokuya offered the first tendon in Japan.

The shop is unassuming, located down one of the temple’s traditional side streets. The temple grounds are sprawling, and its gorgeous landscape and surrounding stalls offer visitors the opportunity to work up an appetite.

Senso-ji temple draws about 30 million visitors a year. It dates to 628, when, as the story goes, two brothers pulled a statue of the Bodhisattva Kannon from the Sumida River in their fishing nets. A temple, in one incarnation or another, dedicated to her has existed ever since. The temple’s main hall, rebuilt after the air raids of 1945, features two replicas of the Buddha.

Prices range from 1,550 yen for the first set to 1,950 for the third. Tendon teishoku includes soup and a small side dish in addition to the tendon for 2,100 yen.

Tempura is a common offering at Japanese restaurants around the world. What makes Tempura Daikokuya special is the secret sauce, called kaeshi, which comes drizzled on the shrimp, vegetables and fish. Made with soy, mirin (a type of rice wine), sugar and broth derived from dried bonito, the recipe was created by Hirokata Maruyama and passed down through the generations.

Daikokuya’s tempura is light and fluffy, with no grease to speak of. The prawns are massive and explode with flavor in each bite. The fish and fried vegetables also are a delight.

The brown kaeshi adds an interesting element to the tempura that is not often seen. It is visually loud in the bowl, yet subtle in taste, almost as if it were drizzled in a sesame oil or a soy sauce that has been stripped of its overbearing salty flavor.

Daikokuya also offers plain tempura, as well as an assortment of various side dishes from miso eggplant to jellyfish to sashimi. There is a wide assortment of beverages, from Japanese sake to juice and tea.

The ambiance of the restaurant is traditional and falls directly in line with its surroundings, yet couldn’t be further from pretentious. The friendly staff greet customers with a smile.

Visitors praying to Bodhisattva Kannon at Senso-ji temple often place their hands together in the Buddhist prayer position and say, “Namu Kanzeon Bosatsu,” according to a website for the temple. This means “I place my trust in Bodhisattva Kannon.”

All religion aside, I place my trust in Tempura Daikokuya.