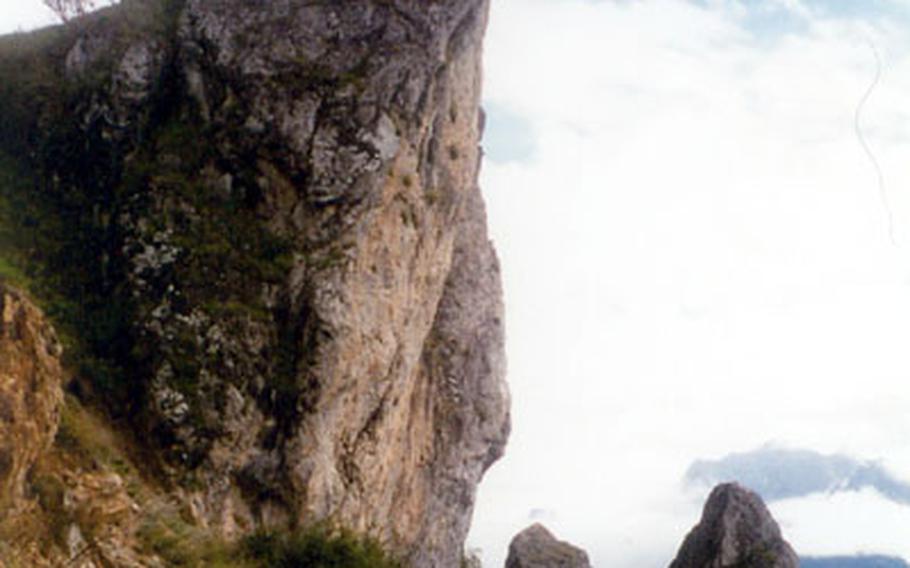 The writer’s husband, whom she whimsically calls “Bicycle Bob,” is dwarfed by one of the gigantic rock formations on the Grisons route. (Leah Larkin / Special to S&S)

The writer’s husband, whom she whimsically calls “Bicycle Bob,” is dwarfed by one of the gigantic rock formations on the Grisons route. (Leah Larkin / Special to S&S) 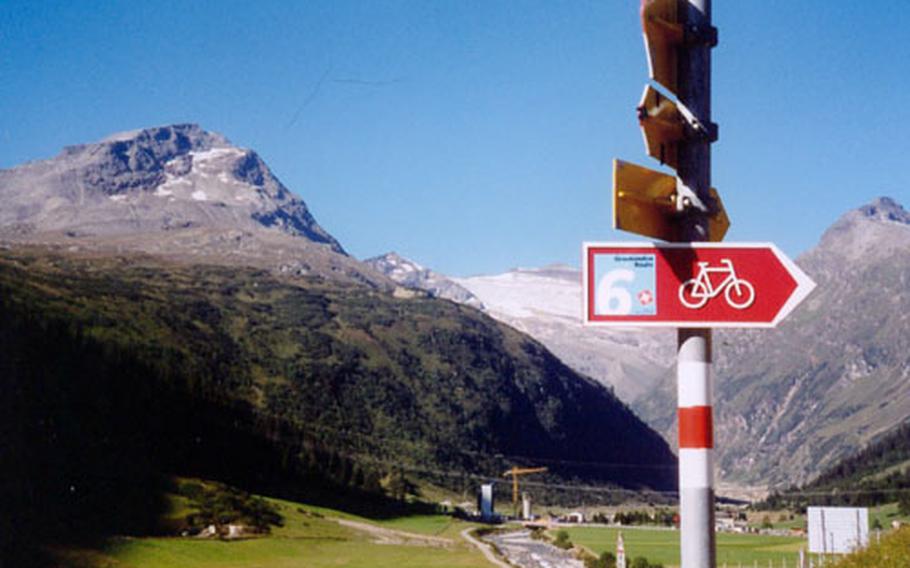 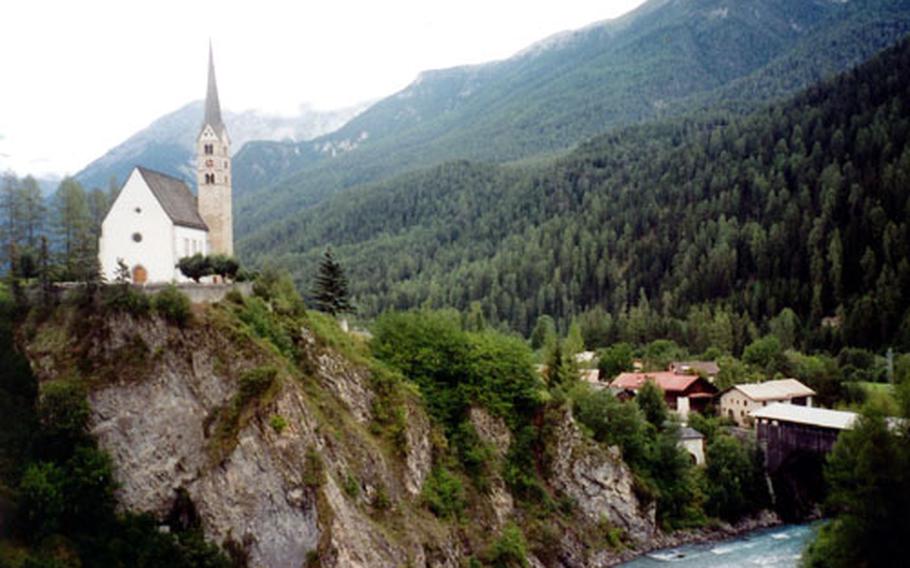 Through fields and woods, into villages and along rivers, the 174-mile Grisons bicycle route leads through eastern Switzerland. (Leah Larkin / Special to S&S) 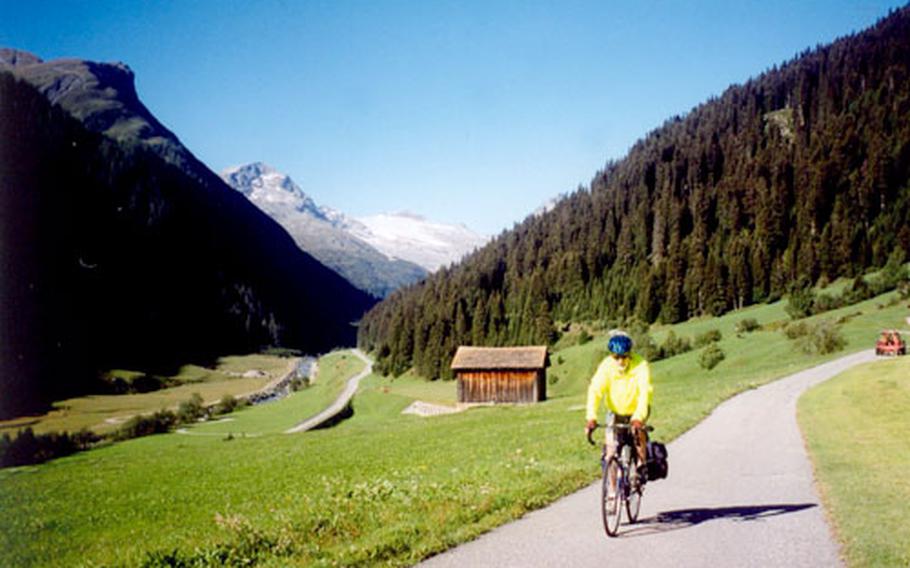 For the sixth summer, we traveled to Switzerland to punish ourselves by riding bicycles over and around its mighty mountains. But after just a few minutes on the trail from Chur to Martina in the eastern part of the country, I knew why. The beauty is beyond description.

Switzerland has nine national, well-marked bicycle routes crisscrossing the country. Each has an accompanying book with detailed strip maps and lists of bicycle-friendly hotels on the route. The books also indicate which sections are extra steep or on heavily trafficked roads, and has symbols specifying which alternate means of transportation, such as bus or train, are available.

Last summer we rode route 6, the Grisons route, which starts in Chur and leads to Thusis from where there are two extensions, one going east to Martina on the Austrian border and one leading south to Bellinzona. We rode both, using the train to backtrack so we could pick up the other leg. Most Swiss trains are accommodating to cyclists with baggage cars equipped to hang or strap down bicycles.

The entire route is about 175 miles. We rode some 155 miles, following the book&rsquo;s recommendation and riding the train to avoid one treacherous section and a long, steep climb. We did, however, pedal over the San Bernardino Pass, a challenging but rewarding trek.

Our first day in the saddle got off to a bad start. We had spent the night at a motel outside Chur, which we thought was on the bicycle route. We rode on a busy road looking for route signs, but found none. We decided to leave the road and ride in some adjacent fields where we found a sign, only to discover that it led to an Umleitung, or detour, sign.

Bicycle Bob, my husband, insisted we obey the sign, turning around and riding until we found another sign. I wanted to ignore the detour and keep riding on the trail. He had his way &mdash; and we rode and rode and rode, with no signs. I was irritated. I asked him where we were going. He said this was where I had wanted to go. After a brief spat we turned around and went back to the detour sign and continued past it on the marked route.

It wasn&rsquo;t the greatest cycling &mdash; a nonpaved, stony trail high above a gorge &mdash; but the views were magnificent. We came to a nasty, muddy section with a sign warning of falling rocks, and figured this must have been the reason for the detour. The stretch was also very steep, and we had to get off and walk about a half-mile.

Fourteen miles later, we pedaled into Thusis where we boarded the train. Had we continued by bike, we would have had to pedal on a congested road with several tunnels labeled &ldquo;dangerous&rdquo; in the book. We stayed on the train to Samedan to also avoid riding over the long and steep Albula Pass.

&ldquo;I don&rsquo;t know of anywhere where the scenery can compare with Switzerland,&rdquo; Bicycle Bob remarked, looking out the window as the train crossed a bridge high above a spectacular gorge with soaring peaks all around.

Back in the saddle in Samedan, we rode to Zernez, skipping the recommended side trip into the mountain resort of St. Moritz as we intended to spend several days there after our ride. We rode in the woods, up some demanding hills, and along a ridge overlooking a deep ravine where a river of chalky green water surged over rocks.

We found a pleasant hotel in Zernez where we had a fabulous dinner: venison with fruit, red cabbage, Sp&auml;tzle (noodles), and a bottle of wine. On our bike trips, we like to eat well, especially in the evening, figuring that we&rsquo;ve earned it.

The next day we rode 37 miles from Zernez to Martina on the Austrian border. We followed the Inn River, its color changing from milky green to Caribbean turquoise as it sliced through the mountain valleys. We were surrounded by the sights, sounds and smells of the Alpine world: raging rivers; cows with big, clanging bells; amazing chutes of water plunging down cliffs; pretty wildflowers. From a distance, the mountain slopes, blanketed with dark pines, appeared almost black. The fields of brilliant green grass were as perfect as those of a golf course.

It seemed like an endless climb through an open meadow from Lavin to Guarda. The book rated it with only two arrows (three arrows is the steepest), but its length was draining. Our route was also one for hikers and we passed many on their way to Guarda, a pretty mountain village. There were more uphill sections to Ftan from where we could finally cruise downhill to Scuol.

I was having problems with my bike. It didn&rsquo;t want to downshift. Bicycle Bob made adjustments, but they didn&rsquo;t solve the problem. We stopped at a bike shop in Scuol where an expert put it back in order.

In Martina, we hopped a bus for a ride back to Scuol, where we spent the night at a hotel across from the train station. The next morning we caught a train back to Thusis, a slow, three-hour but beautiful ride.

From Thusis we set off on the other leg of the route, toward Bellinzona. It was a tough day of pedaling, mostly uphill in granny gear. Part of it was on a scary road with too many cars, trucks and buses whizzing by. Fortunately this lasted for only about a mile after which the route turned off onto a pleasant side road.

There are lots of gorges in this part of Switzerland. We came to yet another with a parking lot so sightseers could stop and get a good view. Metal steps led down into the chasm, a deep and dramatic canyon with a ribbon of water at the bottom.

We were concerned about where we would spend the night, as the bicycle book listed no hotels in any of the towns in the next section on our route &mdash; at least not on our side of the San Bernardino Pass. It was too late in the day to begin the long climb up and over the mountain.

We enjoyed an ice cream and apple strudel break in Spl&uuml;gen, where we inquired about a hotel in Hinterrhein, just before the pass. &ldquo;No&rdquo; was the answer, but we were told we could find one in Nufenen, just five miles away.

En route to Nufenen we were treated to a symphony of bells, a herd of goats on its way to the farm village, a tiny place. We quickly rode through and spotted no hotel. A young man on the street confirmed there were none, and told us just to knock on doors and ask for a room in someone&rsquo;s house.

We were hesitant, but it was 6:30 p.m. and we knew our choices were limited because there was no way we could ride up the pass at this hour. The town did have a truck stop. We went there and, to our surprise, found out that it had rooms &mdash; shower and toilet down the hall &mdash; but at least a place to stay. It wasn&rsquo;t bad and we had a good dinner &mdash; venison again. It was late summer, the season for game.

The next morning we set out for the ride&rsquo;s major challenge, the San Bernardino Pass. I wasn&rsquo;t sure I had the stamina for the five-mile ascent. Several years ago when we rode route 3, the north-south route, I let Bicycle Bob pedal up the Gotthard Pass while I boarded a bus with my bike for the easy way to the top. Now I had no choice. There wouldn&rsquo;t be a bus from Hinterrhein, the town at the bottom of the mountain, for several hours.

A sign at the bottom warned: &ldquo;450 meters auf 8 kilometers&rdquo; (1,485 feet over five miles). It would be a long haul, but it was a lovely sunny day and the road was one of switchbacks, which made the climb less demanding. There wasn&rsquo;t much traffic, and the route was wide enough for both cars and bicycles. It proved less strenuous than many previous ascents.

It&rsquo;s always a thrill to arrive at the top, to savor the sense of accomplishment and to relish the glorious scenery. There&rsquo;s a mountain lake at the top of the San Bernardino that adds to its splendor. We stopped, along with a busload of tourists and motorcyclists, for photos and refreshment.

The ride down seemed endless. My hands tired of holding the brakes. Now we were in the Italian part of Switzerland, where the ambiance definitely has a southern flair. We stopped for a pasta lunch, then rode on to Bellinzona where we spent the night before catching the train back to Chur and our car.

Something about those mountains keeps pulling us back. This summer we&rsquo;ll probably go for our seventh ride in Heidi country, the 190-mile Aare route from Koblenz in the north to Gletsch in the south.

Go to www.myswitzerland.com for more information on bicycling in Switzerland.

The route books accompanying the Swiss bicycle routes can be ordered on the Web. They are available in German and French only, but if you don&rsquo;t speak those languages, the maps, hotel listings and transportation symbols are helpful.

For schedules of the alternate means of transportation, such as buses and trains, pick up the accompanying brochure, &ldquo;Velo und Bahn&rdquo; (&ldquo;Bicycle and Train&rdquo;) at Swiss train stations.