Swabia: The broom outside a German wine inn is an invitation to enjoy wine and simple food 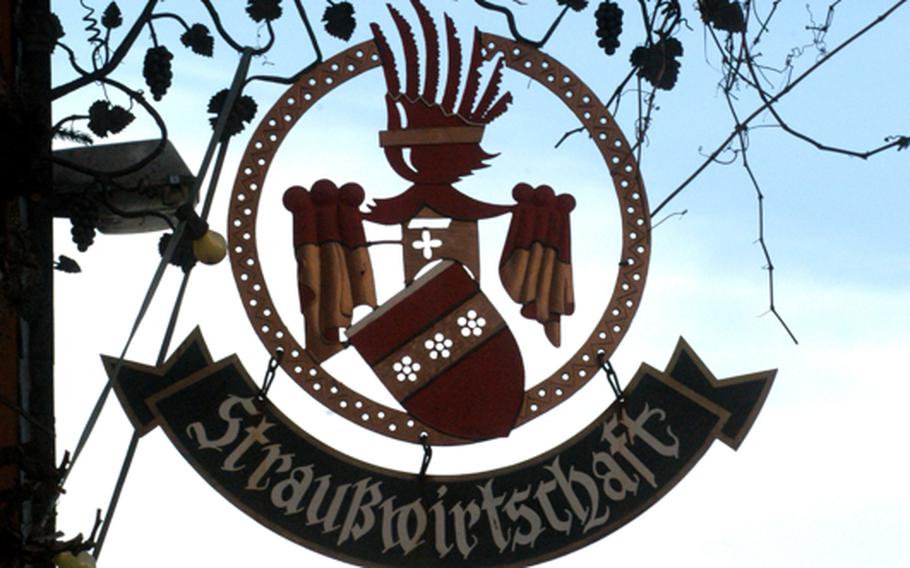 Buy Photo
An elaborate sign advertises a local wine tavern where a vintner can sell his own wines. Along the Weinstrasse, these inns are known as Strausswirtschaften. (Peter Jaeger/Stars and Stripes)

Buy Photo
An elaborate sign advertises a local wine tavern where a vintner can sell his own wines. Along the Weinstrasse, these inns are known as Strausswirtschaften. (Peter Jaeger/Stars and Stripes) 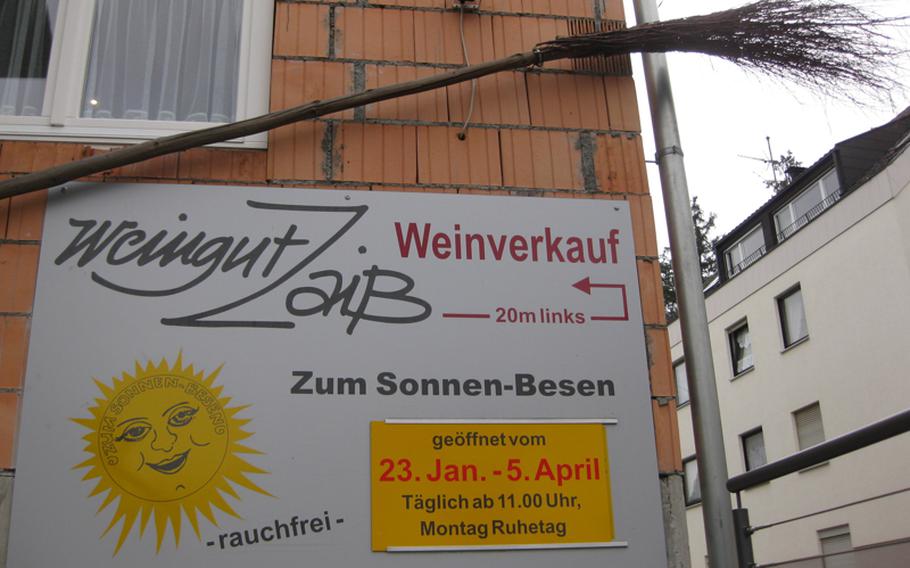 The Sonnenbesen in Obertürkheim, Germany, is run by Gerlinde Zaiss and is one of the roomiest of the wine inns. She says about 10 percent of her winery's sales come from her Besen, the remainder from the wine she sells in restaurants and stores throughout Germany and at her own wine store. (Ivy Kupec) Buy Photo
Joyce Lambert of Echterdingen, Germany, gets a fresh glass of Riesling from Gerlinde Zaiss at the Sonnenbesen. The winemakers often serve the wine via pitchers filled from a large cask. (Ivy Kupec/Special to Stars and Stripes) The food at Besens may be considered basic, but it is home cooked and often very beautifully served, as in the case of these Swabian 'maultaschen.' (Ivy Kupec/Special to Stars and S) 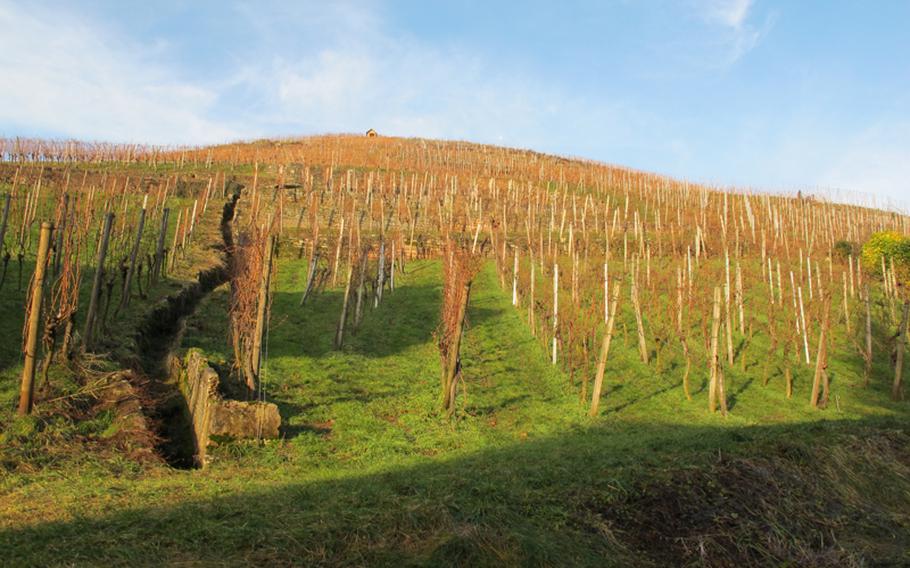 Besens are often situated right among the vineyards from where the grapes originate. In the winter, after the grapes are harvested and the leaves are gone, the vineyards provide the appropriate backdrop for tasting wine. (Ivy Kupec/Special to Stars and S)

It was one of those cold, gray days when one wants to stay inside, a blanket around the shoulders and a warming cup of tea cradled in the hands. Instead, I was out on a mission. I was braving the elements to look for seasonal German wine inns that are reportedly so popular that Germans flock to them. There they squeeze around tiny tables in tiny rooms in what is often a winemaker&rsquo;s private house open for &ldquo;the season&rdquo; to sell the latest vintage and serve some simple food.

My search proved fruitful. I had an address but didn&rsquo;t need it, because as soon as my friend and I got close, the aroma of saut&eacute;ing onions with smoked sausage and sauerkraut greeted us and guided us the few blocks to our destination. And if we weren&rsquo;t sure, the outside of the building was marked with a broom.

That is how all "Besenwirtschaften" &mdash; the German word for these establishments &mdash; are identified. It was noon on a Tuesday, and it was as if we were late to someone&rsquo;s party. We opened the door and entered a small room with probably six tables, which seemed completely filled, and the owner beckoned us to sit with others. Most in this group seemed to be retirees out with pals, and it was a great place for them to linger over a weekday lunch, sipping wine, talking politics, telling jokes and making friends.

&ldquo;Yes, it&rsquo;s mostly an older crowd here at lunchtime,&rdquo; said Markus Schwarz, owner of the Besenwirtschaft Gerhard Schwarz in Untert&uuml;rkheim, a village east of Stuttgart. &ldquo;You see the kids and families coming in here on the weekends.&rdquo;

Schwarz pulled pitchers of Trollinger wine from a big, wall-fixed cask to take around the room and replenish the glasses for patrons as they munched on an assortment of sausages, potato salad, sauerkraut and Swabian Maultaschen, German ravioli stuffed with meat and spinach and served in broth as a soup or atop sauerkraut.

&ldquo;The Trollinger is the most popular wine we serve,&rdquo; he said. &ldquo;It&rsquo;s what&rsquo;s local.&rdquo;

Indeed, this pale red wine, which reminds one more of a dry ros&eacute; than a traditional red, is ubiquitous in this area. Its grapes are grown almost exclusively in the region, so locals take pride in the wine, making it is as much a fixture to the Besen (their more common nickname) as the broom affixed to the outside.

Besenwirtschaften have been operating since Karl the Great permitted them in 800.

The winemakers initially placed a wreath on the door to indicate when they were open for business, but replaced the wreaths with brooms, which proved to be more practical.

&ldquo;To make a wreath is a lot of work, and the winemakers were down-to-earth people who didn&rsquo;t have a lot of time,&rdquo; Mohr said. &ldquo;That tradition continues today.&rdquo;

Wine makers are still allowed to forgo the work of getting a restaurant or liquor license to sell directly to consumers as long as they limit their business to four months of the year, generally from the fall through May. The rules allow "Besen" operators to divide their four months into two periods. They can sell simple food, no elaborate meals, along with their wine and are limited to serving 40 people at a time. By law, health inspectors visit the Besens weekly.

While most Besens are cozy operations conducted in the owner&rsquo;s home, refurbished stables or various other outbuildings, their profits can be substantial.

&ldquo;People eat a lot, drink a lot and the Besens are always full, so the winemakers benefit financially from the Besens, no doubt,&rdquo; Mohr said. But many also do it to keep the tradition alive. &ldquo;Sometimes it&rsquo;s merely the housewife cooking the food from her kitchen, and the winemaker is just a hobbyist, but they continue the tradition,&rdquo; Mohr added.

Gerlinde Zaiss of Sonnenbesen in Obert&uuml;rkheim says that 10 percent of her winery&rsquo;s sales come from her Besen. The remainder is from the wine she sells in restaurants and stores throughout Germany and at her own wine store.

Her Besen is one of the largest in the area and has been modernized so it feels more like a restaurant but still serves only her wines and simple food. Her 11-acre vineyard produces the fruit for several kinds of red and white wines in addition to sparkling wines and liquors.

Many of this region&rsquo;s winemakers have very small vineyards, often only a couple of acres, so distribution is very local. According to Ernst B&uuml;scher at the German Wine Institute, as vineyards in southern Germany were passed down in families, they were divided up by the number of children, making smaller and smaller vineyards through the years and making it almost impossible to export the wine. Most wine from this region never leaves the region, or at least the country, thus making Besens an important outreach tool for wine distribution.

It is also an ideal place to meet the locals.

&ldquo;At lunchtime, we have customers who are mostly here for a quick, home-cooked lunch and then back to work,&rdquo; Zaiss said. &ldquo;By midafternoon, it&rsquo;s the hikers coming by when they finish up on the nearby trails. It&rsquo;s a good gathering place for people to meet up.&rdquo;

In fact, Mohr, who was born and raised in Stuttgart, claims that Besens are the one place that the typically shy Swabians &mdash; people from this region &mdash; are forced to mingle. &ldquo;Our dialect is a bit different, so we tend to stick to ourselves normally, but Besens force us out of our shells, and I think, we love that.&rdquo;

They&rsquo;d also love to share the experience. &ldquo;It&rsquo;s very seldom that you see Americans in the Besen, but I think it&rsquo;s because they think it&rsquo;s only for the locals,&rdquo; Mohr said. &ldquo;That&rsquo;s really not true. Most locals can speak a little bit of English and are interested in Americans. It&rsquo;s a really great cultural experience for visitors.&rdquo;

Ivy Kupec is a freelance writer living in the Stuttgart area and writes a blog about Swabian Germany at http:www.ivyink.org. Email her at ivyink2007@gmail.com.