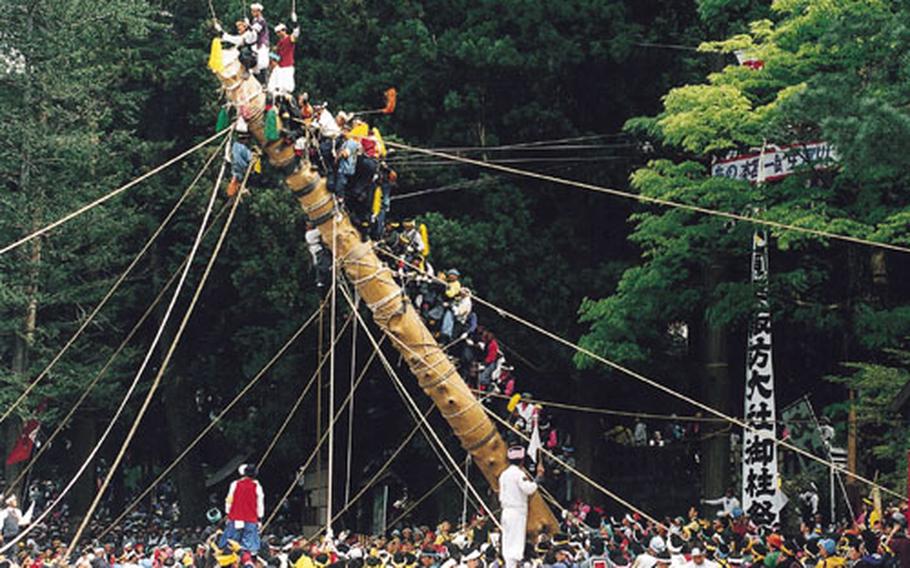 “Tate Onbashira,” the finale after the month-long Onbashira Festival, is the erecting of the Onbashira (sacred pillar) at the corners of Maemiya Shrine and Honmiya Shrine of Kamisha. It takes place on both May 3-4 at Shimosha, on May 8-9 at Harumiya and May 10 at Akimiya. (Photo courtesy of Suwa Sightseeing Federation)

The Suwa Taisha Onbashira Festival in Nagano Prefecture takes place April 2 through May 4 and is considered one of the big &#8220;masculine&#8221; festivals of Japan.

In the years of the Tiger and Monkey, 16 large trees are cut down in the mountains and taken through the villages to the Honmiya and Maemiya shrines of Kamisha Main Shrine, and the Harumiya and Akimiya shrines of Shimosha Main Shrine &#8212; both of which make up the Suwa Grand Shrine in Suwa, Nagano Prefecture.

The climax of the festival is the Kiotoshi. Young men ride the 12-ton, 55-foot-long logs as they slide down a steep slope. One or two men are killed at almost every festival, and many are injured.

Why would people risk their lives to do this?

Yasuki Miura, 51, of the Chino City Chamber of Commerce says participants think it is a particular test of their courage and a chance to show valor. Kiyoshi Shimada of the Museum of Shinto Studies at Kokugakuin University in Tokyo says people&#8217;s primitive energy comes out at the festivals. Japanese spend their daily lives buried in groups, he said, adding that festivals allow them to shine as individuals.

The opening Shinto ceremony each day of the Onbashira Festival is very solemn. Shintoism does not call for the dangerous stunts, but respects regional customs and traditions and accepts various ways people celebrate their festivals, Shimada said. Shinto has neither a scripture nor a code, he added.

An official of Suwa Shrine said nobody has blamed the shrine for the casualties. In fact, he said, those who got injured think they were injured because their devotions to the shrine were not enough. In 1998, the last time the festival was held, it attracted about 1.78 million spectators.