Stuttgart: A history of excellence at the Mercedes-Benz Museum 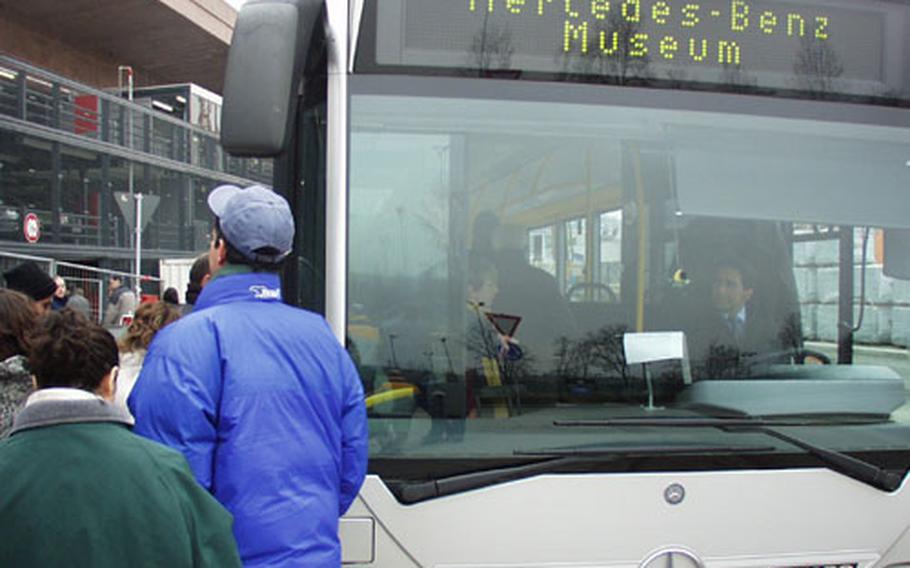 The Mercedes-Benz Museum, located on the grounds of one of the company’s factories, is a stickler for security, and patrons must park at an off-site lot and be shuttled to the museum entrance. (David Josar / S&S)

The Mercedes-Benz Museum, located on the grounds of one of the company’s factories, is a stickler for security, and patrons must park at an off-site lot and be shuttled to the museum entrance. (David Josar / S&S) Cars at the Mercedes-Benz Museum in Stuttgart, Germany, are displayed along a ramp that leads through the center of the museum’s modern architecture. (David Josar / S&S) Visitors to the Mercedes-Benz Museum in Stuttgart, Germany, look at one of the more than 100 cars on display. (David Josar / S&S)

STUTTGART, Germany &mdash; The officials who operate the Mercedes-Benz Museum are a little particular about security. Rightly so since the museum is inside the luxury carmaker&rsquo;s Stuttgart-Unterturkheim plant.

If you forget, a burly guard quickly barks &mdash; in German, of course &mdash; to remind you.

For those willing to put up with the quirks, the Mercedes-Benz Museum gives a brilliant tour that follows the development of the gas combustion engine to the first cars with a top speed of only 5 mph to Mercedes limousines that carried dictators.

The museum uses more than 100 cars, starting with the world&rsquo;s first motor vehicles of Karl Benz and Gottlieb Daimler, to trace the development of the company, which essentially mirrors the automobile revolution.

You can look at subsequent vehicles and see how cooling systems were developed as well as how car interiors changed.

What is perhaps most interesting about the museum is that despite housing a priceless collection of rare and historically important vehicles, visitors are left unfettered to look at the cars anyway they can as long as they don&rsquo;t touch.

At times, though, some visitors go overboard. A Mercedes Type 500 K Special Roadster &mdash; one of only 25 made in the 1930s and now estimated to be worth around $3 million &mdash; quickly became the backdrop for a group of camera-touting tourists. Not only did they scurry across the display and pose with the vehicle but before each photo was snapped, they dropped their hands with an audible &ldquo;thunk&rdquo; on the car&rsquo;s bright red fender.

Visitors are fed a wealth of information via the hand-held audio tour device. However, there was some obvious missing and misstated information.

There is no mention made of what the company did during World War II, or how it was restructured after the war.

The narrator, while discussing the company&rsquo;s foray into aircraft engines, correctly explains that after World War I and the Treaty of Versailles, no German company could build aircraft engines for military use.

However, while explaining several aircraft engines the company built for planes used by the Germans during World War II, the narrator did not explain that Hitler and Germany simply decided to no longer follow the agreement, allowing the country to develop its war machine.

One of the interesting tidbits visitors learn is that the name &ldquo;Mercedes&rdquo; was the name of Gottlieb Daimler&rsquo;s daughter. Also, the company&rsquo;s Silver Arrow racing car got its unique silver color and look because it once was too heavy for a race. The vehicle was 1 kilogram overweight and to cut weight, the car&rsquo;s designers sanded off the paint leaving only the silvery metal.

Across the street from the museum parking lot, construction crews are now working on a new facility that is to open in 2006. The current museum holds just a fraction of the auto company&rsquo;s collection, and the new building will give visitors access to a more complete inventory.

Directions: The Mercedes-Benz Museum is about a 10-minute drive from downtown Stuttgart. By car, follow signs displaying the football symbol to &ldquo;Gottlieb-Daimler-Stadion&rdquo; on Mercedes Strasse. About 400 meters behind the stadium and just outside the DaimlerChrysler factory gate, turn right into the parking lot. From here, shuttle buses take you to the museum.

By public transportation, take the S-Bahn S1 line to the Gottlieb-Daimler-Stadion stop, and from there follow signs to the DaimlerChrysler plant.

Admission: Admission to the museum and use of the audio tour guide are free.

Times: The museum is open from 9 a.m. to 5 p.m. Tuesday through Sunday; closed Mondays and public holidays.

Food: There is a small caf&eacute; inside the museum.