Stubai: The party’s on at Austrian glacier 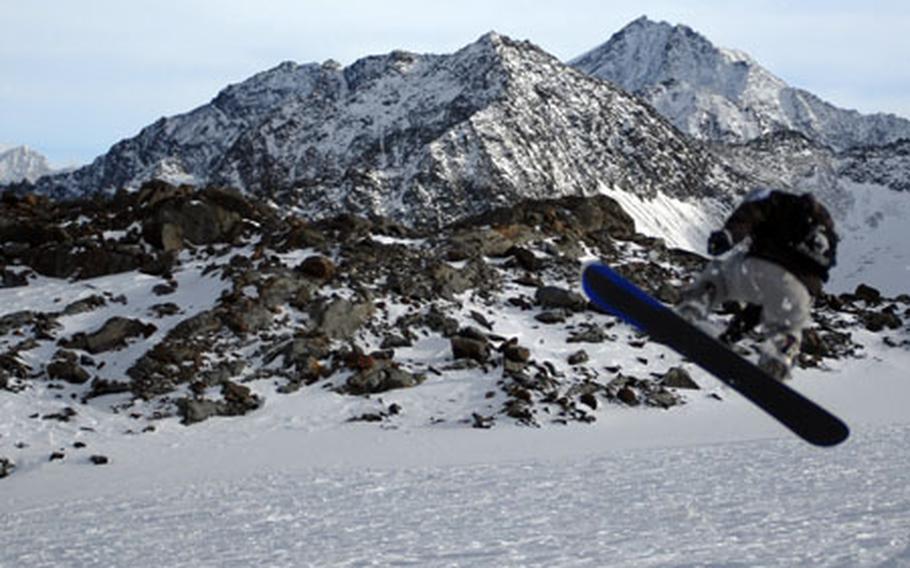 Brian Okrama, 25, of Phelan, Calif., pulls off a nice jump on the slopes at Stubai. Okrama said he&#39;s been snowboarding for seven years. (Seth Robson / S&S)

Brian Okrama, 25, of Phelan, Calif., pulls off a nice jump on the slopes at Stubai. Okrama said he&#39;s been snowboarding for seven years. (Seth Robson / S&S) 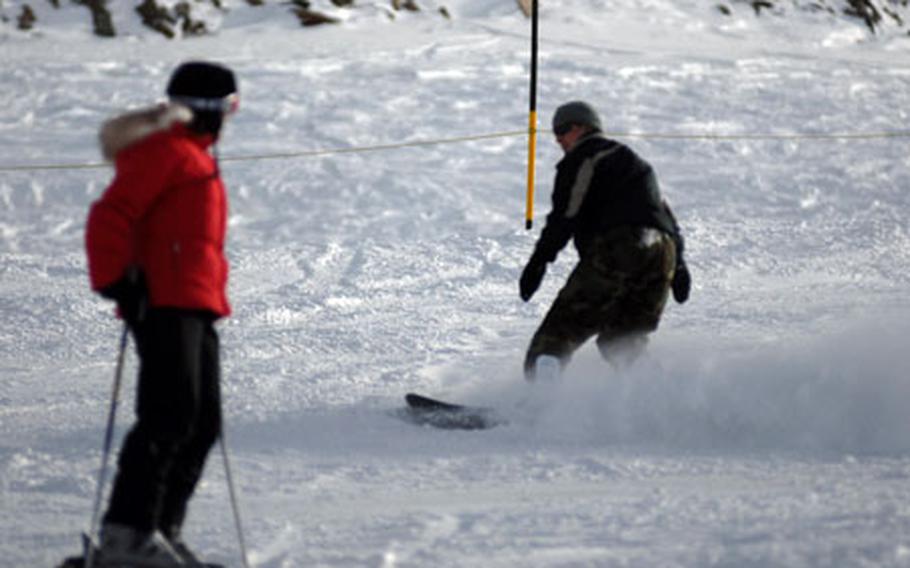 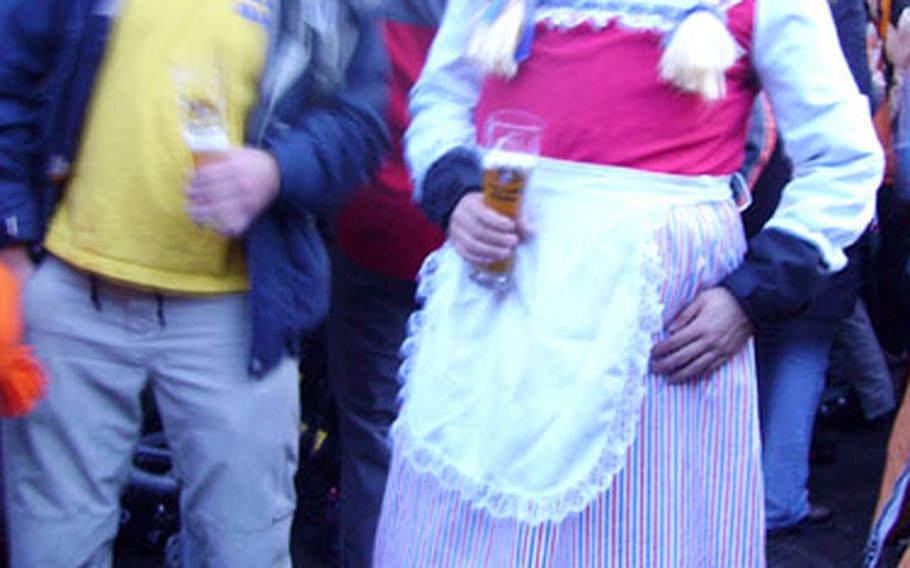 On Thanksgiving weekend in Mutterberg, Americans mingled with Austrians, Germans, Italians and a large man dressed as a milkmaid swigging beer and singing along to blaring pop music. (Seth Robson / S&S) 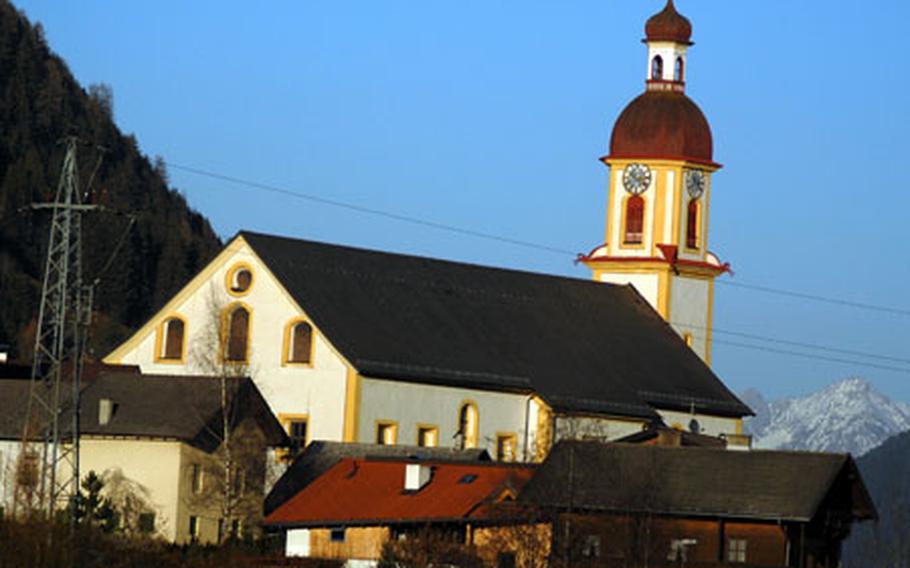 Neustift’s historic church stands in the center of the valley surrounded by grassy hillsides grazed by cows and sheep. The town boasts a number of sit-down restaurants, bars and nightclubs, a kebab shop, supermarket and several ski rental shops and stores selling ski clothing and equipment. (Seth Robson / S&S)

You don&rsquo;t have to walk far to get to the apr&egrave;s-ski party after a hard day on the slopes at Stubai Glacier.

By 4 p.m on a Friday, the party is well under way just a few uncomfortable strides in ski boots from the Mutterberg station, where gondolas from the glacier drop off returning skiers.

On a late November weekend in the resort at the foot of the Tirolean Alps, Americans mingled with Austrians, Germans, Italians and a large man dressed as a milkmaid swigging beer and singing along to blaring pop music.

Many of the skiers probably were celebrating their first outing on the slopes this winter and had headed to the glacier to do it. With the lack of snow so far this season, Stubai is still a good place to go. A recent review of snow conditions in Austria by ifyouski.com found that the best locations are the higher resorts or glaciers &mdash; although snow forecasted for this month could change that. At press time, many of the lower resorts were operating totally on man-made snow.

Stubai is about 30 miles south of Innsbruck, Austria, and just over an hour&rsquo;s drive from Garmisch, Germany &mdash; the most popular ski destination for U.S. personnel stationed in Europe.

The ski area ascends from about 5,700 feet to about 10,400 feet and includes 24 lifts. At 35.50 euros a day for an adult lift ticket, it offers some of the best early-season skiing in Europe.

The top of the mountain, near the 10,200-foot Schaufelspitze peak, can be reached either by a gondola or a six-seat chairlift. There is a panoramic view of the snow-covered Alps stretching across Austria and into Italy, but the skiing up here is limited to a pair of T-bars suitable for beginner to intermediate skiers.

To get back down, you can ski alongside the six-seater &mdash; a long, mostly easy run that includes a steeper section toward the bottom sure to challenge intermediate skiers and likely to be too tough for most beginners.

An alternative route down involves riding a two- seat chairlift over to a series of T-bars that also cover moderate terrain. However, there is the bonus of a few small jumps on your right as you head down.

For snowboarders, there is a small jump park on the right side of the six-seat chairlift as you head down. The park features a couple of easy jumps and about four boards to practice grinding.

A lot of the American skiers at Stubai that November weekend were from military ski clubs from across Europe. Michelle Wolff of the Bavarian Ski Club said her group included 42 skiers, mostly from Grafenw&ouml;hr and Vilseck, Germany.

Veteran skiers from the club know how to pace themselves, heading out onto the slopes for a few graceful runs, then meeting up at the bar in the Gamsgarten to drink beer and tell stories about past ski trips.

The Gamsgarten, at the top of Stubai&rsquo;s first gondola, also features a restaurant and a gear rental shop. For a couple of euros a day you can rent a locker there to stow valuables.

Other Americans on the slopes included young soldiers from the 2nd Cavalry (Stryker) Regiment who arrived in Vilseck earlier in the year. Most were snowboarders with boundless energy that kept them out on the slopes from dawn until dusk.

Second Cav soldier Pfc. Sean Henninger, 20, of Tyler, Texas, said his only previous alpine experience was a ski trip to Cooper, Colo., but he was keen to try snowboarding at Stubai.

&ldquo;At Fort Lewis (2nd Cav&rsquo;s last duty station in Washington State) I&rsquo;d already bought a board so I would be ready when we came over here,&rdquo; he said.

First-time 2nd Cav snowboarder, Pfc. Trey Lund, 20, of Rochester, Minn., said he learned a lot on his first day on the mountain. He mastered carving quickly but said his buddies were pressuring him to try jumping.

Another 2nd Cav soldier, Pfc. Brian Okrama, 25, of Phelan, Cal., was pulling off some of those nice jumps. But he had a good reason: Okrama said he&rsquo;d snowboarded for seven years.

&ldquo;My snowboard buddies all said when I was here in Europe I needed to go snowboarding. The Alps are famous for snowboarders,&rdquo; he said.

A limited budget means most of Okrama&rsquo;s snowboarding will probably be closer to Grafenw&ouml;hr at Arber Mountain, but he said he probably will save up to take at least one trip to France &mdash; especially if the weather improves and the snow begins to fall.

Know and go ...A good place to stay near Stubai is the town of Neustift, about a dozen miles from the ski field. A free shuttle bus runs between Neustift and the ski field every half-hour in the morning and in the afternoon.

In addition, guest houses and hotels are scattered along the length of the Stubai Valley leading to the glacier. For more on Neustift and surrounding areas, including contacts for the tourism office, see www.stubai.at.

For those looking for hotel, one option is the StubaierHof, which features cable television, a restaurant and bar, sauna and hot tub. Rooms are 52 euros per person a night, including breakfast. For another 8 euros a night, you can get a three-course dinner. Its Web site is www.stubaierhof-neustift.at/welcome.htm.

Those on a budget should consider a pension (guest house) such as the Sonnleitn, where, for 27 euros per person a night, you get a clean, comfortable room with a large balcony and spectacular views as well as a free European breakfast. For reservations, see www.skiresorts-test.com/accommodations/4700.pension-sonnleitn.0.html.