A bicyclist rides on the path that runs along the Main River, past Steinheim’s castle keep at left, and the old toll tower. (Michael Abrams / S&S)

A bicyclist rides on the path that runs along the Main River, past Steinheim’s castle keep at left, and the old toll tower. (Michael Abrams / S&S) A wild boar sow and her piglets hunt for food at the Wildpark. (Michael Abrams / S&S) 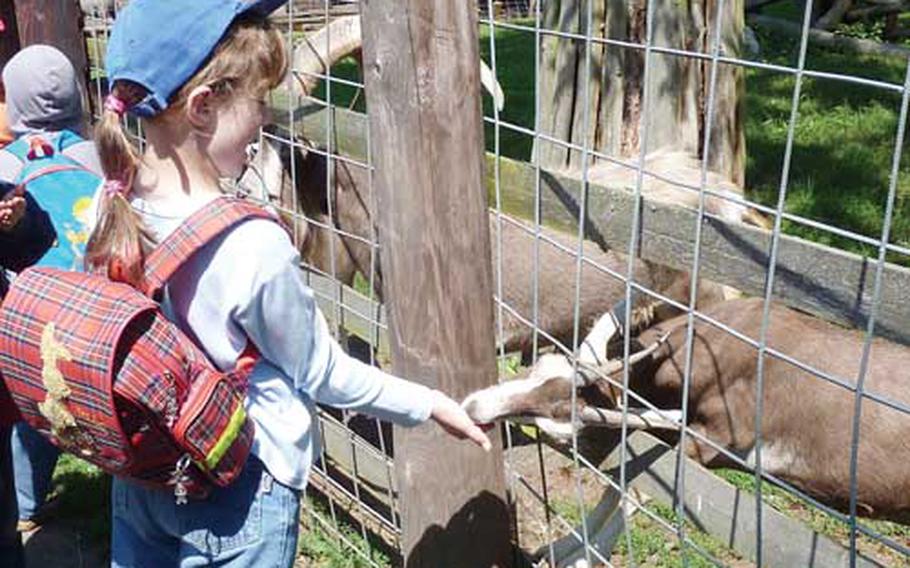 A young visitor to the Wildpark in Klein-Auheim, Germany, feeds a goat. You can buy feed for the animals at the admission desk, and this is the only food you are allowed to give the animals. (Michael Abrams / S&S)

Hanau is a sprawling city on Germany&rsquo;s Main River, east of Frankfurt. It has been known for its goldsmiths, Philippsruhe palace and the famous fairy-tale gatherers, the Brothers Grimm.

But its suburbs also have a couple of small treasures worth discovering.

One is the old town of Steinheim. The other is the Wildpark Alte Fasanerie, a game park in nearby Klein-Auheim.

If you visit the two, it doesn&rsquo;t really matter where you start; they will take a full day. But keep in mind that the animals usually are more active early and late in the day, and in Steinheim, most of the taverns and restaurants open in the late afternoon.

So let&rsquo;s get started.

The Wildpark Alte Fasanerie gets its name from the hunting lodge and grounds established in the 18th century by a pair of archbishops of Mainz. Later it was ceded to the dukes of Hessen-Darmstadt, and remained their hunting grounds until the end of World War I. In the 1960s, the state of Hessen opened the game park.

Today the park features about 35 varieties of birds and animals, such as deer, wild boar, wolves, bison, owls and lynx.

Nearly 10 miles of paths crisscross the park&rsquo;s 264 acres, and a 2-mile-long marked trail goes past all the animal enclosures.

You have to be eagle-eyed and patient to see some of the animals. If you are looking for the raccoons, for example, take a look high up in the trees. The wolves can be spotted deep in the woods, but the wild boars, normally shy animals, often come running when they see humans, who they hope will feed them.

Feed is for sale at the admission gate, and the goats and the fallow deer will eat right out of your hand. However, throw the food to the boars, because they will bite.

The park also has a falconry show that features it birds of prey.

A new, non-animal attraction, a high-ropes course, opened at the Wildpark this year.

Steinheim is an old town, standing on a basalt outcrop over the Main. Its castle, built by the lords of Eppstein, dates to the 13th century. The town&rsquo;s history is much like the Wildpark&rsquo;s. The von Eppsteins sold it to the archbishops, later it went to the house of Hessen-Darmstadt, then to the state of Hessen.

The castle houses a museum featuring prehistoric and medieval finds from the area and the town&rsquo;s history. Little stone towers uniquely top the castle keep. Also worth seeing are the castle gardens with an old toll tower facing the river.

One street worth noting is Harmonie-strasse. It was once called Judengasse for the Jews who lived on it. It ends on Platz des Friedens, once the town&rsquo;s market square. Louis Meyer-Gerngross, a Jew, donated the Peace fountain here to the town. It was damaged by anti-Jewish rioting in 1938, taken down in 1940 and re-erected in 1965.

Harmoniestrasse also passes by the Church of St. John the Baptist, which has a tower that looks more like a castle watchtower than a steeple.

On your walk, you probably will pass one of the apple wine taverns Steinheim is known for. Stop at one and try a glass for the full Steinheim experience.

On the QTDIRECTIONSLeave Autobahn 3 at the Hanau exit and head toward the town on B45. The highway splits into B45 and B43a. To go to the Wildpark, take B45 and follow the signs. To go to Steinheim, take B43a and follow the Altstadt (old city) signs.

FOODThe Jagdhaus restaurant at the gate of the Wildpark is open daily, except Mondays (and Tuesdays from November through March), starting at noon. The food is moderately expensive. Steinheim has many restaurants and apple wine taverns; most are not open before 5 p.m. The town has two places for fine dining, Steffen&rsquo;s Restaurant and the restaurant in the Best Western Vila Stokkum hotel.Information