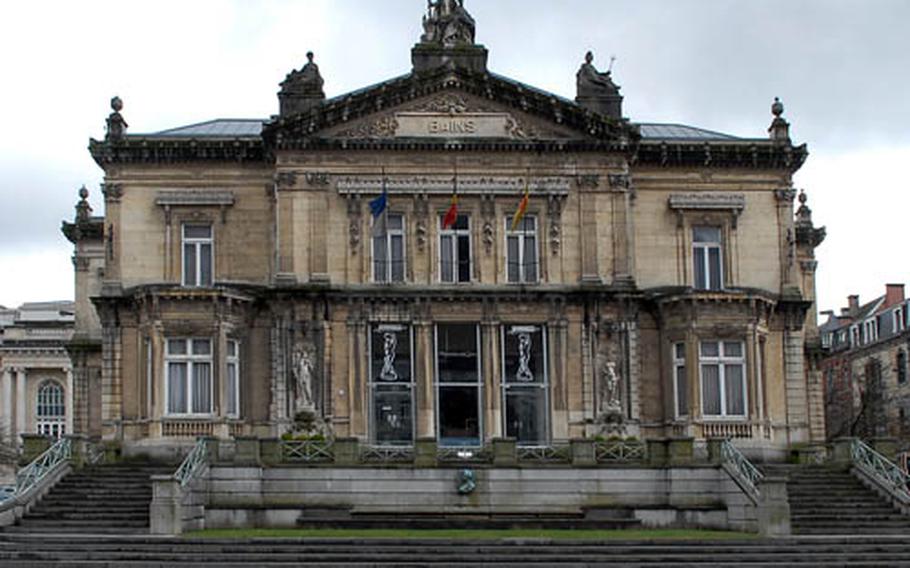 The old bath house in Spa, Belgium, is no longer used, as the baths are now in modern facilities. Spa gave the English language its name for a health resort. (Michael Abrams / S&S)

The old bath house in Spa, Belgium, is no longer used, as the baths are now in modern facilities. Spa gave the English language its name for a health resort. (Michael Abrams / S&S) 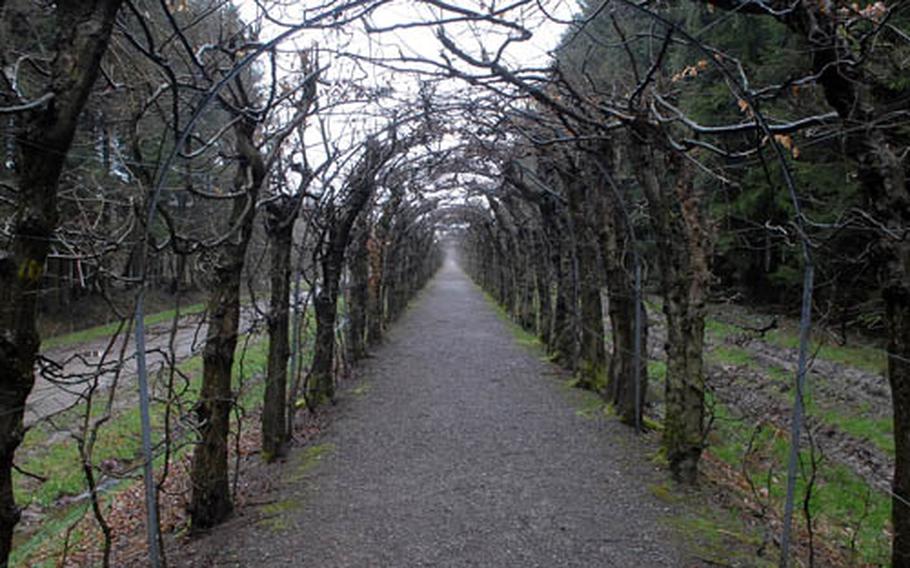 The Charmille, a covered walk of hornbeams, near Desnié, Belgium. Made from about 4,500 pruned hornbeams, a type of birch tree, it is the longest hornbeam bower in Europe. (Michael Abrams / S&S) 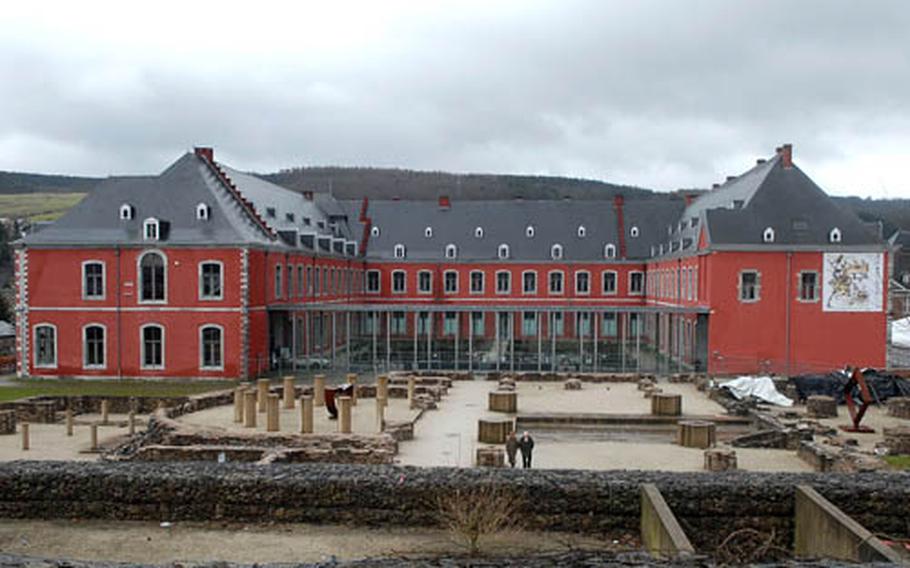 The former abbey at Stavelot, Belgium, houses three museums, an art gallery and a tourist information office. In front of it are the ruins of the abbey church. (Michael Abrams / S&S) 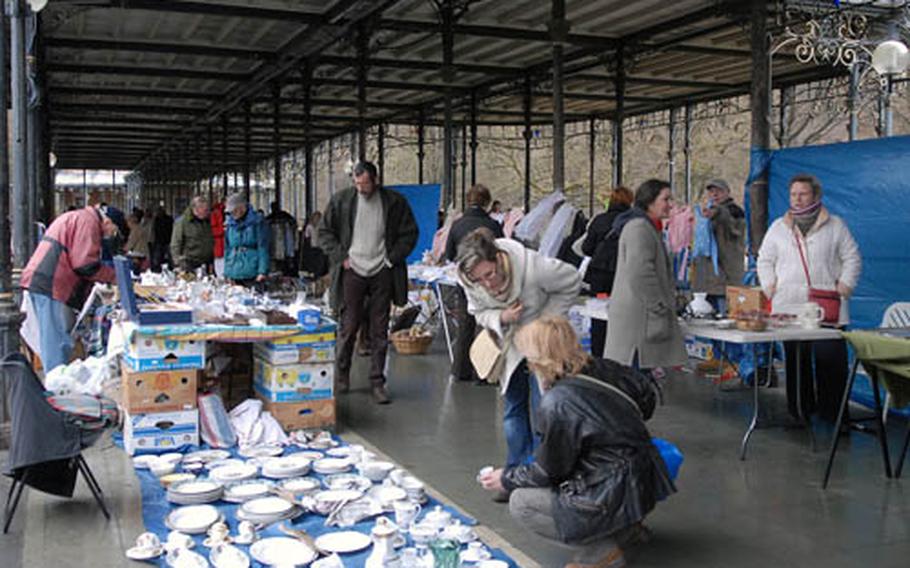 Visitors check out the goods at the Spa flea market. It takes place every Sunday morning in the Sept Heures park, behind the tourist office. (Michael Abrams / S&S) 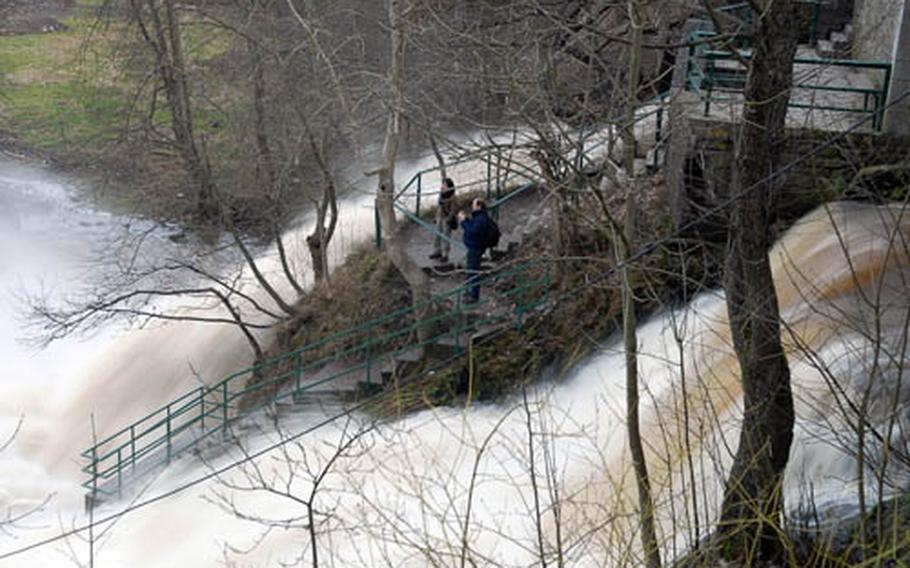 The waterfalls at Coo, Belgium, were made by monks in the 18th century. At the foot of the falls is a popular spot for kayaking. (Michael Abrams / S&S)

Tucked away in the lush forests of the Ardennes hills is the town that gave the English language its name for a mineral springs resort.

The Belgian town of Spa is at the center of the countryside known as the Pays des Sources, or land of springs. It is a beautiful landscape of rivers, streams and waterfalls, hills and dells, cozy villages and a lot of history.

Spa has been known for its springs for centuries. Even Russian czar Peter the Great once visited here. Its attractions include its baths, casino and the famed Spa-Francorchamps racetrack nearby.

The town has fallen on hard times in this economically depressed area of Belgium, but with today&rsquo;s concern for good health and new baths, Spa is making a comeback.

That can&rsquo;t necessarily be said for the rest of the region. While driving through the countryside, expect to run into abandoned houses and roadside inns that, if it weren&rsquo;t for the green countryside, would remind you of ghost towns in an old Western.

But there is still plenty to see on a leisurely drive through this part of the Ardennes.

Theux has the beautiful church of St. Hermes and Alexandre. Dating to the 11th century, its ceilings are decorated with 127 paintings from the 17th century. Theux also has a nice market square.

On the outskirts, high above the town, are the ruins of Franchimont Castle, which was built in the 11th century and expanded in the 13th and 14th centuries. Marked hiking trails run through the countryside, circling the castle.

Near Desni&eacute; is the Charmille, a covered walk. It is made from about 4,500 pruned hornbeams &mdash; a type of birch tree &mdash; and at about 1,750 feet is the longest hornbeam bower in Europe.

You can&rsquo;t miss the December 1944 Historical Museum in La Gleize; a German Tiger tank sits outside of it. Inside are 15 dioramas tracing the Battle of the Bulge in this area.

At Coo, artificial waterfalls made by monks in the 18th century thunder into the river below. At the foot of the falls is a popular spot for kayaking.

Stavelot has an old abbey that now is home to three museums, including one on the racetrack, but the town is most famous for its Lenten carnival and its main characters, the masked, pointed- nosed, white-robed Blanc Moussis.

Sart is a cozy, cobblestone village, with a church that dates to 1705. Its steeple, however, is a fortified tower from the 12th century.

The Vieux-Pont, or old bridge, in Polleur spans a small river, the Ho&euml;gne. Built in the 13th century, it was once part of an ancient road that connected Tongeren and Trier.

Ancient too, is the town&rsquo;s 14th-century church. Note its twisted spire &mdash; it won&rsquo;t be the only one you see when traveling through the Pays des Sources.

Pays des SourcesThe Pays des Sources Web site is www.pays-des-sources.be (limited English). There are Pays de Sources tourist offices in Stavelot, Theux, Francorchamps and Sart. Pick up a sightseeing map at one of them for a driving tour of the &ldquo;land of springs.&rdquo;

Although the churches usually are open to visit, many other sites are not open year-round. Franchimont castle is open daily only from May to September, on weekends in April and October. The baths at Spa are open daily. Verify hours in advance when possible.