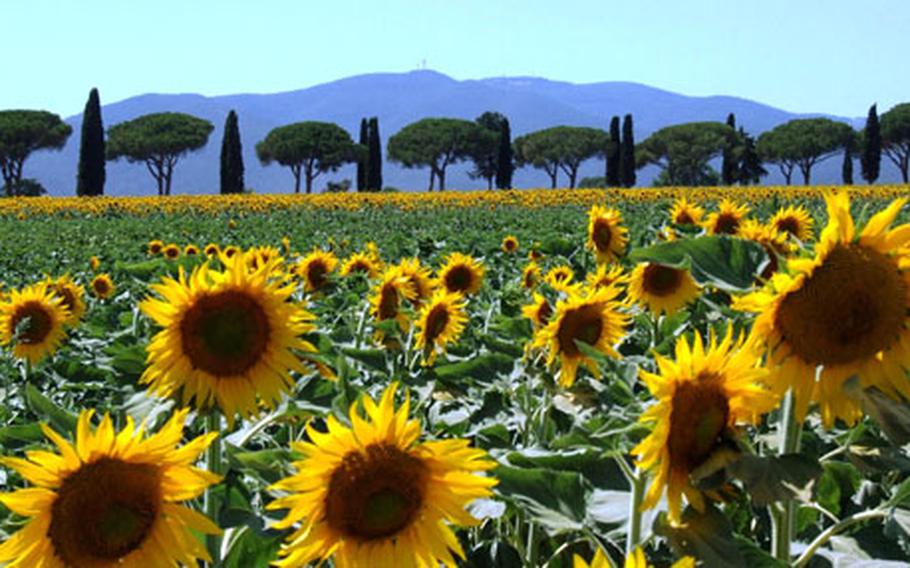 The southern part of Tuscany is full of sunflowers in July, and a great place to enjoy the outdoors on a bicycle. (Leah Larkin / Special to Stripes)

The southern part of Tuscany is full of sunflowers in July, and a great place to enjoy the outdoors on a bicycle. (Leah Larkin / Special to Stripes) 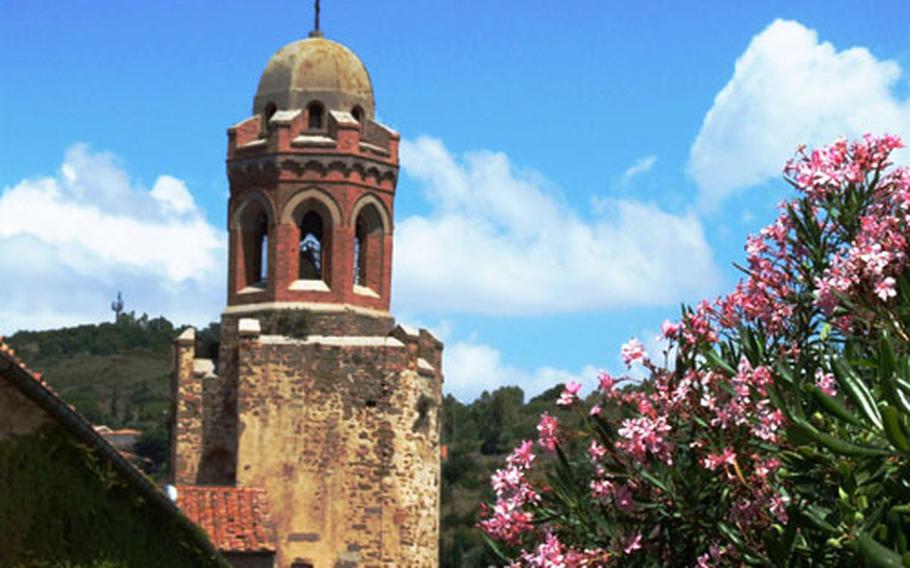 Beaches may be the main attraction of the coastal town Castiglione della Pescaia, but a walk through town rewards with pretty sights, such as this church tower. (Leah Larkin / Special to Stripes) Gelsomino Pagliai makes cane seats for chairs. He’s one of few who still take on this laborious task by hand. (Leah Larkin / Special to Stripes) The town of Roccatederighi, at 1,500 feet, offers spectacular views of the Maremma, one of the least-populated regions of Italy. (Leah Larkin / Special to Stripes) 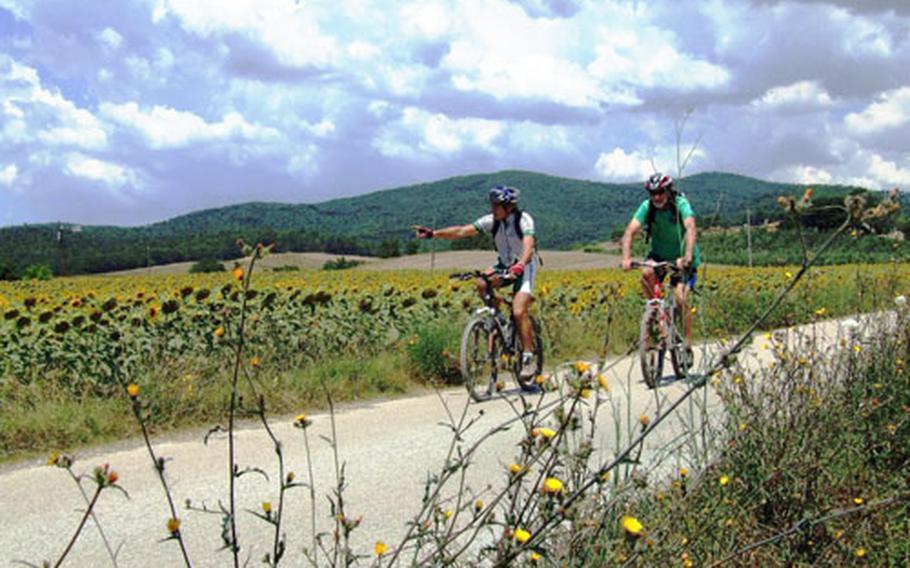 Biking in the Maremma is just one of several outdoor activities to be enjoyed in the region. (Leah Larkin / Special to Stripes)

We had come to this area of rugged hills, medieval villages, silvery olive groves and vineyards in July to bike and taste wine. Forget Florence, Chianti and Siena. This is &ldquo;hidden, undiscovered&rdquo; Tuscany &mdash; although it has been discovered by some tourists, namely Germans and Italians. But the masses who pack Florence&rsquo;s Uffizi Gallery and Siena&rsquo;s Piazza del Campo are missing.

Life here is laid-back. There are no must-see sights, yet there is plenty to explore. For the active-minded, there&rsquo;s biking, hiking and swimming in the sea as well as lakes. We (my husband, brother, sister- in-law and 10 year-old-nephew) enjoyed it all.

We rented an ancient house, the Casa dell&rsquo;Artista, in Roccatederighi, a tiny but lively village built high atop volcanic rock. Our house was at the end of the village on a cliff with splendid views of the neighboring hills and valleys from the second-floor balcony. More great views were a short trek away, following a path to the top of a rock spur.

One main street, accessible to cars, leads through the village. The other &ldquo;streets&rdquo; are skinny alleys carved out of rock that climb the hill, through stone arches, past old dwellings, and are only for those on foot, bicycle &mdash; or a mini vintage tractor.

Riccardo Baldanzi, who owns the local bike shop and speaks English, met us on the edge of town behind the wheel of an antique tractor, which we loaded with luggage. He strapped down the gear for the bumpy uphill ride to our casa, while we trudged behind lugging more stuff.

Riccardo manages the Casa dell&rsquo;Artista, which is owned by an English couple. He gave us tips on what to see and do and led us on bike excursions. His parents, Mario and Anne Baldanzi, run the local grocery where we bought our supplies. Often Riccardo&rsquo;s 3-year-old son, Francesco, sat on grandma&rsquo;s lap and helped with the cash register.

We patronized the Baldanzi shop as it was closest to our casa, but Roccatederighi has more commerce &mdash; two butchers, three bakers, a fruit and vegetable shop, crafts shop, newspaper/ book shop, even a small supermarket, plus three bars, four restaurants &mdash; and monuments of the medieval past including a church, clock tower and parts of the city wall.

I had fun browsing in the shops and practicing my limited Italian. Italians love to talk and always seem delighted to converse, even with a foreigner who is struggling to get the verbs and articles right.

For our first excursion outside the village, we drove to Lake Accesa, a half-hour away. There is no beach as the lake is surrounded by tall grasses, but wooden decks are hidden amid the greenery. A path leads around the lake from deck to deck. We claimed one for ourselves &mdash; our own private hideaway. Swimming in the clear, spring-fed water was glorious. Nephew Tai had a great time catching minnows and frogs.

We took a detour on the way back to our casa for a stop in Massa Maritima, the major town in the area. It&rsquo;s impressive with a majestic Romanesque/Gothic cathedral, grandiose piazza, a massive 13th-century tower, and streets lined with intriguing shops selling gourmet delicacies, ceramics, clothing &mdash; and ice cream. We indulged. Nothing beats Italian gelato.

Biking with Riccardo was on the agenda for the next day. We rented bikes at his shop, then loaded them on to a trailer. The turf in this area is challenging. Riccardo planned the ride so, thanks to trailer transport, we avoided most of the steep ascents and enjoyed leisurely pedaling on flat surfaces or downhill.

He led us on paved roads where there was little traffic, then on to dirt roads. We pedaled past golden fields of sunflowers, forests, hills of vineyards and groves of fruit and olive trees, admiring the castles and nests of houses crowning distant hills.

We got off the bikes and hiked up a steep slope to see a huge hole that was once part of a mine. The area is rich in copper, silver and iron &mdash; all of which have been mined since the days of Etruscans as far back as the eighth century B.C.

Mining has stopped, but cork is still an important product of the region. Riccardo picked a piece of bark from a tree that was used for cork, then told us about the trees and how cork is harvested.

Lunch was at an agriturismo, a farm that offers rooms and meals. We sat outside on a terrace under grape vines adjacent to a 1,000- year-old farmhouse in the midst of lovely gardens. The meal &mdash; pasta, salad and dessert &mdash; was good, but the beautiful surroundings, including a cage of doves and geese and an enormous swimming pool, were even better.

Another day we headed by car to the coast and the town of Castiglione della Pescaia, with its miles and miles of adjacent beaches. After a walk through the old walled town, we trekked to the beach, but our stay there was short due to fierce winds.

Tai is a nature fan who seems to have memorized encyclopedic details about every known animal. He and his parents took off one day to the Maremma National Park for a hike in search of wild boar and other critters. They saw only deer, but liked the walk. My husband and I opted for another bike excursion with Riccardo, this time to visit wineries.

The week ended too soon. When Riccardo arrived with the tractor for the trip back to our car, we were sorry to leave.

However, God willing, my husband and I will return.

Know and go ...We paid 810 euros for five people for a week&rsquo;s stay in July at Casa dell&rsquo;Artista. For a selection of places to stay, see www.holiday-rentals.co.uk; for Casa dell&rsquo;Artista, key in 17519 in the blank space asking for a Property No. at the top right corner. This gives details of the property and a calendar with availability information.

Bike rental costs between 10 euros and 20 euros per day, depending on type of bike. Guided bike excursions cost 18 euros to 25 euros per person depending on the itinerary. More information at: www.maremmainbici.it.