Sofia: A stroll through the capital 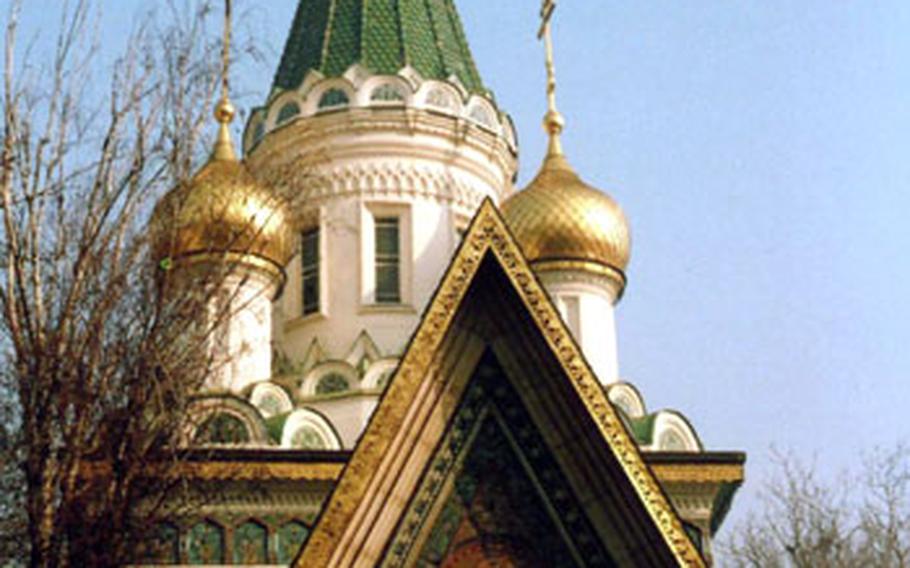 The Russian church of St. Nicholai is a sparkling jewel in downtown Sofia. It is often referred to as Sofia&#39;s prettiest church. (Leah Larkin / Special to Stripes)

The Russian church of St. Nicholai is a sparkling jewel in downtown Sofia. It is often referred to as Sofia&#39;s prettiest church. (Leah Larkin / Special to Stripes) 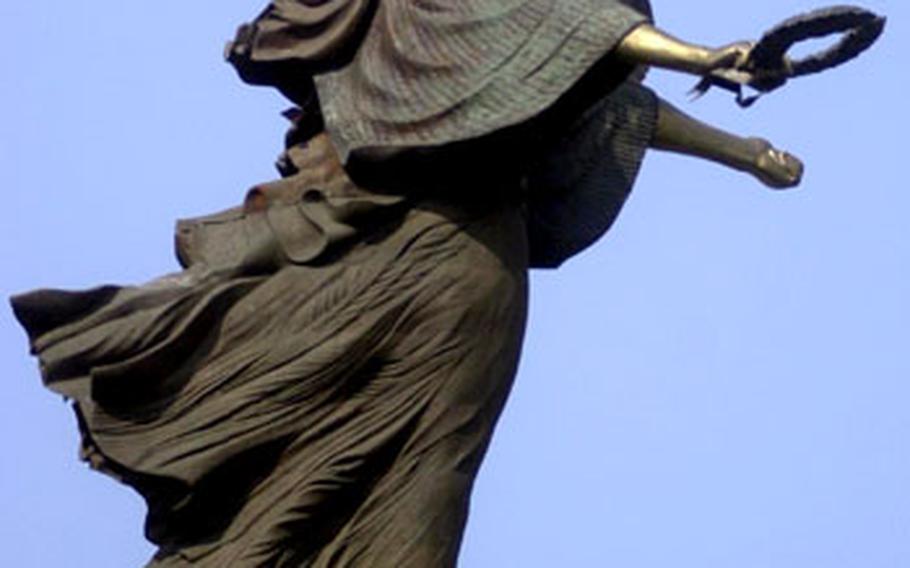 The Statue of Sofia greets visitors to the Bulgarian capital. (S&S file photo) 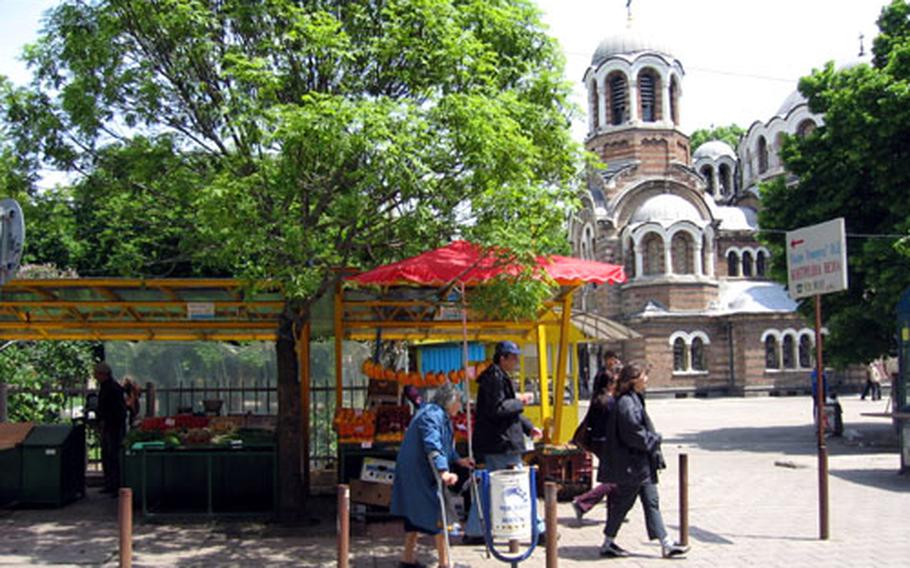 A small market is set up near the Sveti Sedmochislenitsi Church. The church was created between 1901 and 1902 through the conversion of an abandoned Ottoman mosque. (Karen Bradbury / S&S)

Sofia, Bulgaria&rsquo;s capital, might not be as glamorous as those other eastern European capitals, Prague and Budapest. But the city of just more than 1 million is a pleasant surprise.

Check out the city park on a sunny winter afternoon. Mothers push strollers and stop to chat with one another. An accordionist and a saxophonist play pleasant tunes under the barren trees. A group of men gathers around two intense chess players.

On Vitosha Boulevard, the city&rsquo;s pedestrian thoroughfare, people stroll down the middle of the street. It&rsquo;s a bustling place. So is the city&rsquo;s covered market, which was restored in 2000. In the middle of the hall surrounded by shops &mdash; bakeries, butchers, vegetable stands and souvenir boutiques &mdash; there are two restaurant/bar complexes where it&rsquo;s hard to find a seat.

Almost everything worth seeing is in the center of town and can be visited on foot. Start at the statue of St. Sofia, the city&rsquo;s patron whose golden statue was erected atop a tall pedestal six years ago. The citizens of Sofia are said to love the statue but the church hates it, contending that it is not a religious rendition of a saint. Indeed the figure, wearing a form-fitting gown with a plunging neckline, looks more like a Greek goddess.

Head over to the fourth-century St. George Rotunda, the oldest and best-preserved building in Sofia, which now stands behind a Sheraton Hotel. The ancient church is surrounded by ruins, the remains of the Roman town of Serdica. Within the structure, three layers of frescoes were discovered, the oldest dating to the 10th century.

Although the church was not closed during the communist era (1944-1989), it was in a dilapidated state. It was restored between 1997 and 1999 and is now a museum, but daily services are still held there.

Walk through Alexander Battenberg Square, named after the man who became the country&rsquo;s first prince in 1879 after the country was liberated from the Turks, who had dominated the land for some 500 years. Pass the National Art Gallery, a yellow building that was the former royal palace, and continue down Tsar Osvoboditel Boulevard past the Russian Church of St. Nicholas. This is Sofia&rsquo;s prettiest church, with a bright yellow- tiled exterior, gilded domes and an emerald-green spire, all sparkling in the sun &mdash; a delightful jewel amid the busy city. It was built in 1913 in the traditional Moscow decorative style as the project of a Russian architect.

The golden dome of St. Alexander Nevski Cathedral, the city&rsquo;s largest place of worship, dominates the skyline. The majority of Bulgarians are Christian Orthodox and their churches are lavishly decorated with frescoes, icons, chandeliers and candles. Some are dark and mysterious places with the flickering of candles casting a soft glow on the silver that covers many of the icons. The churches have no pews. Worshippers stand, light candles and kiss the icons.

Thanks to large clear windows, St. Alexander Nevski is lighter than most Orthodox churches. It was built between 1908 and 1912 and commemorates the 200,000 Russian soldiers who perished in the Bulgarian War of Liberation.

The massive interior can hold up to 5,000 people. The d&eacute;cor is overwhelming: some 300 frescoes of saints, mosaics, gigantic chandeliers with electric candles, Italian marble, Egyptian alabaster, Brazilian onyx and gold. Bulgaria&rsquo;s best collection of icons is said to be on display in the crypt.

Across the street is a simpler church, St. Sofia, which originally was built during the reign of the Byzantine Emperor Justinian, between 527-565. According to legend, a princess by the name of Sofia was buried in the church and the town was named after her.

During Turkish rule, minarets were added and the church served as a mosque until two earthquakes in the 19th century destroyed one minaret and the mosque was abandoned. Restoration work began in 1900. The present building is a cross-form, three-nave basilica with three altars and a dome.

There&rsquo;s a lively and colorful street market in the area around the churches. Everything is for sale, from Russian fur hats, lacquered boxes, icons and embroidery to flea market bric-a-brac.

Museums in Sofia include the Natural History Museum, with the usual collection of stuffed animals, as well as terrariums with living specimens, namely snakes.

The National Archaeological Museum, housed in a former mosque, contains finds from all over Bulgaria, including lots of statuary fragments from the second century. Religious frescoes from the 16th and 17th century hang on the gallery level. The museum&rsquo;s prized treasure is the Vulchitrun gold collection of vessels and other precious objects &mdash; an amazing amount of gold.

However, it&rsquo;s the National History Museum, just outside town, that is said to be the best.

Take a taxi to the museum or take in the action on Vitosha Boulevard. Walk past classy designer boutiques, CD shops, porcelain stores, clothing shops, Dunkin&rsquo; Donuts and other retail outlets where the business is brisk.

Wherever you go, Sofia is on the move in more ways than one.

Know and go&bull; Money: The Bulgarian currency is the lev (1 lev equals about $.72); plural is leva. There are ATMs throughout the city, as well as banks where you can change money. There are also &ldquo;change&rdquo; booths. Check the rate before changing money at these places; they often give a poor rate.

Keep small change handy. There is often a small charge to use the rest- room.

&bull; Lodging: I stayed at the Hemus Hotel, about a half-hour walk from the city center. It appeared to have changed little since Soviet times, but it had a casino with slot machines and free drinks and hors d&rsquo;oeuvres. A double room with breakfast is 150 leva. E-mail info@hemushotels.com

&bull; Dining: Food and drink are reasonably priced. At a chic Italian restaurant I had a salad, glass of wine and coffee for 14 leva. A beer at my hotel was 2 leva, and a cup of coffee in a cafe near the hotel was only l lev. I stopped several times for cappuccino, which is very good in Sofia, and only 1.50 leva a cup.