Skiers find plenty of runs for fun in South Korea Skiers get ready to hit the slopes at Chonma Resort. Ski shops at resorts like Chonma offer rental equipment. (Stars and Stripes photos)

Skiers get ready to hit the slopes at Chonma Resort. Ski shops at resorts like Chonma offer rental equipment. (Stars and Stripes photos) 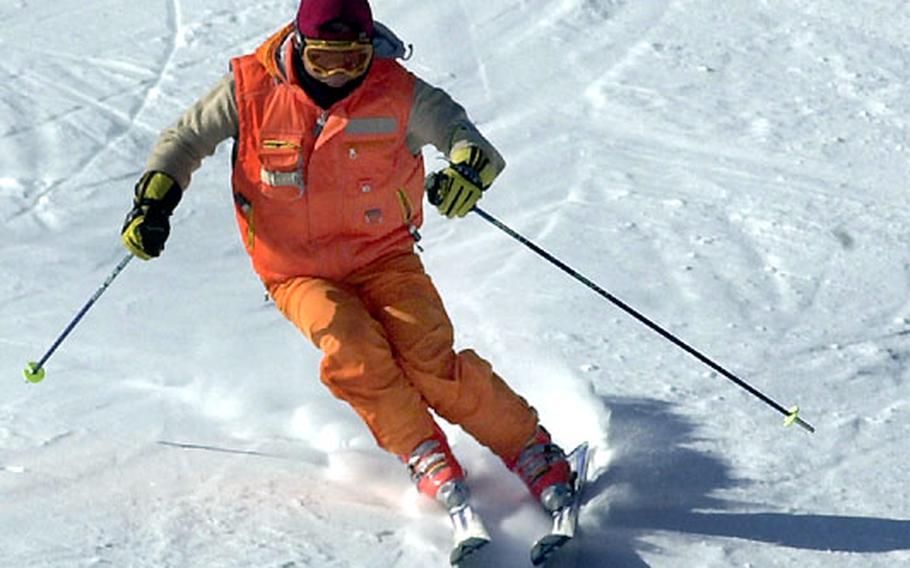 A skier tests the manmade snow on an early season run at Chonma Ski Lodge. (Stars and Stripes photos) Though South Korea is famous for its bitterly-cold winters, it isn&rsquo;t usually mentioned as a winter sports destination.

Unlike in Japan, which is able to boast of facilities from the Nagano Olympics, there isn&rsquo;t an overriding sense of international allure for skiers.

But in recent years, a dozen high-quality resorts have sprung up throughout South Korea, some within an hour or two of Seoul.

And for some of the soldiers and civilians who have been on ski trips here, the difference in cost more than makes up any perceived lack of glamour or grandeur.

&ldquo;When I came over here, I didn&rsquo;t think I&rsquo;d do any skiing, which kind of bummed me out,&rdquo; said Spc. Pete Kotke, a 2nd Infantry Division soldier who grew up skiing in Vermont. Now nearing the end of an extended two-year tour, Kotke says he found enough good resorts to keep him busy over the long Korean winters.

The oldest ski resort in South Korea, Yongpyeong also has some of the longest runs. The Rainbow Course, which extends from the base of the resort to its highest peak, runs for just over three miles.

The resort also features a 12,000-foot- long gondola lift that carries eight people to the top of the Rainbow Course. On a clear day, skiers say, you can see from the East Sea to Mount Odaesan. Yongpyeong gets high marks for both its scenery and its ski runs.

Yongpyeong Resort and Taemyong Resort are the most popular skip trip areas for those living in Seoul, said Kim Pyong-oh of SK Tours.

Yongpyeong Resort has always been the first choice, but Taemyong Resort, located near Hongchon, Kangwon Province, has gotten more popularity from people in Seoul because of its slightly more convenient location, Kim said.

Like many other in-town travel agencies, SK Tours has three kinds of packages depending on the length of the trip. One-day tours cover transportation, lift use and ski rentals, and longer trips include lodging and ski lessons.

And while most resorts offer some English services, if you need ski lessons, it&rsquo;s advised that you bring a Korean speaking friend for better communication with the instructor, Kim said.

Of the dozen large ski resorts in South Korea, almost half are one to two hours outside of Seoul in Gyoenggi-do Province, although the best slopes &mdash; including Yongpyeong &mdash; are in the mountainous region of Gangwon-do Province.

All of the resorts welcome both skiers and snowboarders, and some cater to tourists from China, Southeast Asia and Japan, resulting in larger and newer facilities to attract high-spending customers.

For the best information on each of the resorts, go to the official South Korean tourism Web site at http://english.tour2korea.com and click on any of the links to the ski information.

Following are some of the skiing options available to U.S. servicemembers in Korea.

Community Activities Center: Ski trips will run every Saturday from Dec. 6 through March.

How to get there: Take a bus number 765, 765-1, or 1130 at Chongryangri, Seoul and get off at Seoul Resort. If you drive, go to Guri Interchange, and get to Namyangju. Then take road 46, and drive onto Seoul Resort.

How to get there: Take a bus going to Ichon at East Seoul Terminal. At Ichon, take bus number 12 to Jisan Resort. If you drive, take Kyongbu Expressway and get off at Shingal Interchange. Get onto Yongdong Expressway and drive on until you see Dukpyong Interchange. Then turn left at the interchange, and Jisan Resort is about 2 miles away.

How to get there: Take Olympic Highway and go to Guri Toll Gate. Keep going until you see Naechon and then you will see a Bears Town Resort sign.

How to get there: Take a bus at Seoul Nambu Terminal and it takes two and a half hours to get to Muju Resort. If you drive, take Kyongbu Expressway, and get off at Muju Interchange. Drive on until you see Libera motel, and turn left. Pass through both Chimok Tunnel and Guchondong Tunnel and you will see Muju Resort.

How to get there: Drive 10 kilometers from the the Donong three-way junction (Checkpoint) in the direction of Chuncheon. Pass the Machi Tunnel and turn left at the sign 1 kilometer ahead. Past the town, you will see Chonmasan Ski Resort.