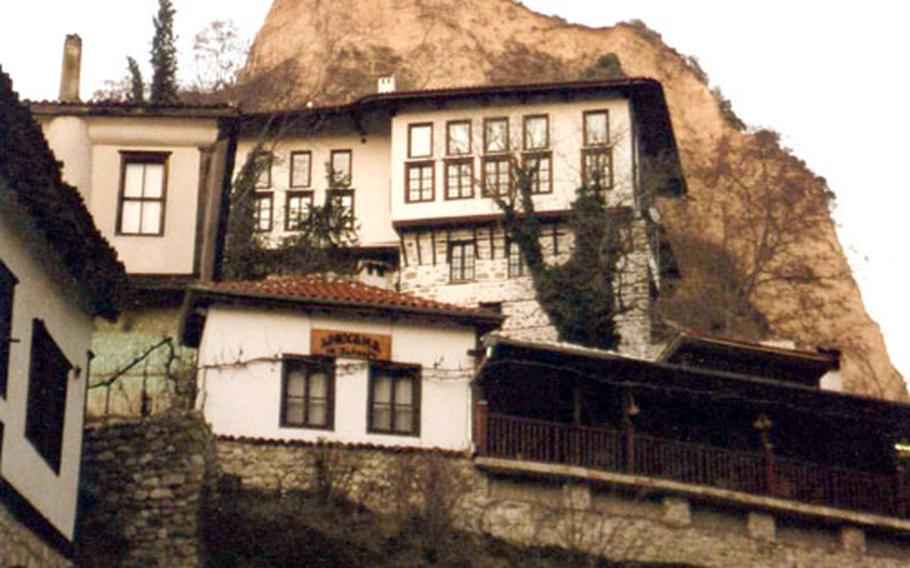 Sand cliffs known as the Melnik Pyramids form a backdrop for the old, white Revival houses of Melnik. (Leah Larkin / Special to S&S)

Sand cliffs known as the Melnik Pyramids form a backdrop for the old, white Revival houses of Melnik. (Leah Larkin / Special to S&S) 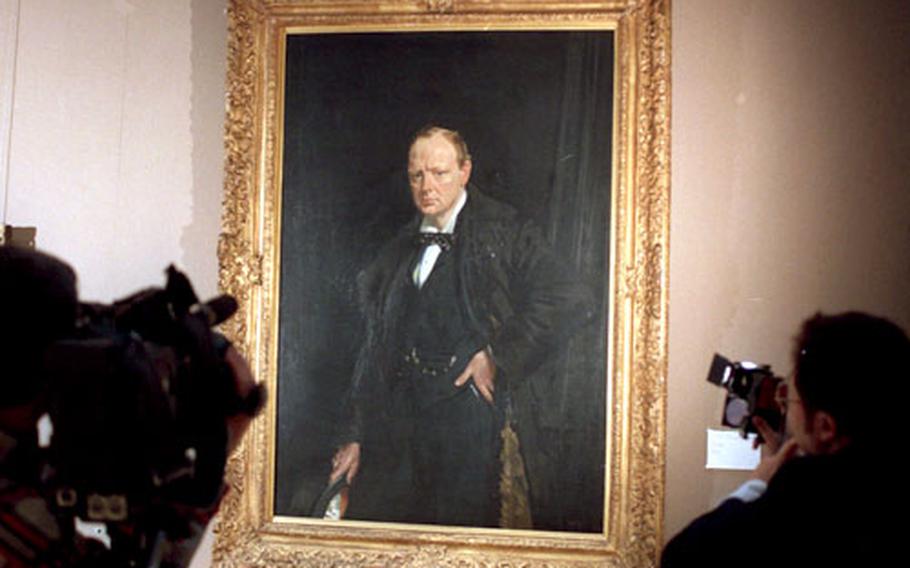 Winston Churchill, represented in a portrait at left, annually ordered 500 liters of Bulgaria’s Melnik wine made from its very own grape, the broad leaf Melnik. (Leah Larkin / Special to S&S) 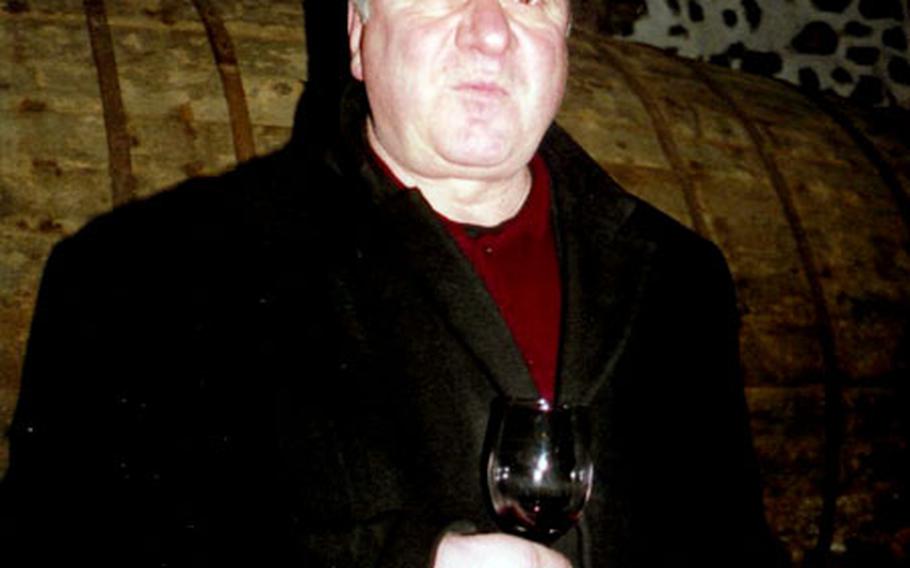 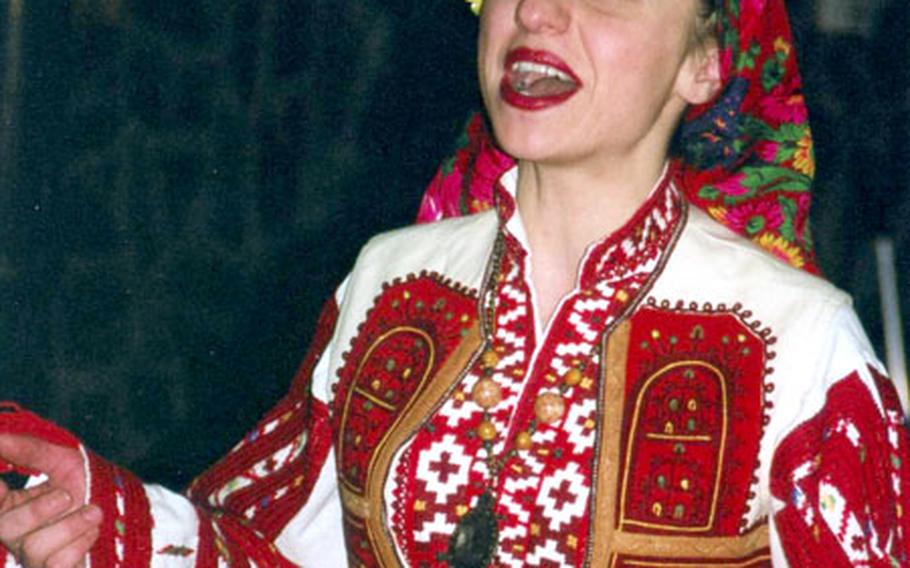 Bulgarian wine might not get the publicity that French and Italian vintages do, but it does have its fans. Among them was Winston Churchill, who was known to have an annual order of 500 liters of the country&rsquo;s Melnik wine made from its very own grape, the broad leaf Melnik.

Melnik, in addition to being a hefty red wine, is also the name of a Bulgarian town, population 300, and popular tourist attraction. After touring the town on a recent group visit, we visited the nearby Damianitza winery, where we learned about and tasted Bulgarian wine.

First, our guide, Tzvetelina Shutova, gave us a lesson in history.

Winemaking in Bulgaria is an ancient tradition, dating to the Thracians, then the Romans, she said. In the Middle Ages, monks produced wine and stored it in the cold crypts of their monasteries. During the rule of the Ottoman Empire, winemaking survived despite strict Islamic laws.

By the beginning of the 20th century, new methods of vine cultivation and production were developed, resulting in quality wines. Those wines were reserved for the Soviet elite during the years behind the Iron Curtain, when all wineries were taken over by the state. Limited quantities were exported &mdash; mainly poor-quality table wines to Germany, where the wine quickly gained a bad reputation.

During the era of Soviet President Mikhail Gorbachev, production was limited, Shutova said, as part of a crackdown on alcoholism. But today the wineries are back in private hands, production is booming and &ldquo;now the goal is to produce quality wines,&rdquo; she said.

We tried several of its wines, including one labeled &ldquo;No Man&rsquo;s Land.&rdquo; It comes from grapes grown in border territory between Greece and Bulgaria that once was an area of guarded fences and patrols between the worlds of socialism and capitalism. The 2003 vintage we tried was a blend of the Merlot and Cabernet grapes and, according to Shutova, a wine with a &ldquo;rich aroma &hellip; fruity, fresh and light.&rdquo;

We also tried a Unigato Melnik 2003, a blend of the Melnik broad leaf grape and Cabernet Sauvignon that had been aged for 10 months in Bulgarian and French barrels. Another wine, Unigato Rubin 2004, is a blend of the Syrah and Nebbiolo grapes.

&ldquo;With the Unigato line we aim to show superb wines from lesser-known varieties with unique style,&rdquo; Shutova explained. Even though I could not detect the flavors of &ldquo;vanilla, coffee, spices and blackberries&rdquo; that our hostess pronounced were in these wines, I found the tastes excellent and bought several bottles, as did many others in our group. The wines are reasonable, priced at the winery between $5 and $10 per bottle.

We also visited a winery, Todoroff, in the southern region near Plovdiv, Bulgaria&rsquo;s second- largest city. Desislava Kostadinova was our hostess at this facility, which also offers a dinner and folklore program in conjunction with wine tasting.

&ldquo;Bulgarians drink a lot of rakia (strong Bulgarian brandy), followed by wine. We&rsquo;re used to drinking wine. My grandparents had wine and bread mixed together for breakfast,&rdquo; said the young woman, who became interested in wine as an exchange student in California.

The grape of note in the southern region is the Mavrud. It produces a rich, flavorful red wine. We tasted a 2004 Mavrud, a strong wine with an alcohol content of 13 per cent. Kostadinova said it could be stored from 10 to 15 years, but after aging for four or five years, the alcohol content jumps to 13.5 percent.

She was especially proud of a 2003 Merlot, which she characterized as &ldquo;elegant, smooth and velvet.&rdquo; The wine won a silver medal at a competition in Bordeaux.

&ldquo;At a wine fest in France, our wines were judged among the top 1,000 wines in the world,&rdquo; she boasted. &ldquo;We hope one day we will be among the top 100.&rdquo;

It&rsquo;s not just the Bulgarian wines from Todoroff that are gaining worldwide recognition. According to one Web site, Bulgaria is the &ldquo;fastest-growing newcomer on the market.&rdquo; It is said to have four times the area planted with Cabernet Sauvignon as California.

The biggest attraction in the town is the Kordopoulov House, an architectural gem built in 1754. The d&eacute;cor on its three floors includes Viennese stained glass, woodcarving, colorful hand-woven rugs and wall paintings. The cellar is a maze of tunnels used by revolutionaries to escape from the Turks before the Balkan War (1912-1913), as well as a place to store the special Melnik wine.

As a Bulgarian journalist in our tour group noted, &ldquo;Even during World War II, when Bulgaria was officially Nazi Germany&rsquo;s ally and there were some German troops in the country, neither Sir Winston [Churchill] nor the town of Melnik gave up their contacts &hellip; and the delicious wine.&rdquo;

For information on the Damianitza wines and winery tours, see www.melnikwine.bg. For information about visits to the Todoroff wine cellars and its dinner and folklore program, see www.todoroff-wines.com. Click on &ldquo;products,&rdquo; then &ldquo;wine tours.&rdquo;