Sink your teeth into 'Da Bone' at Delmonico's in Guam 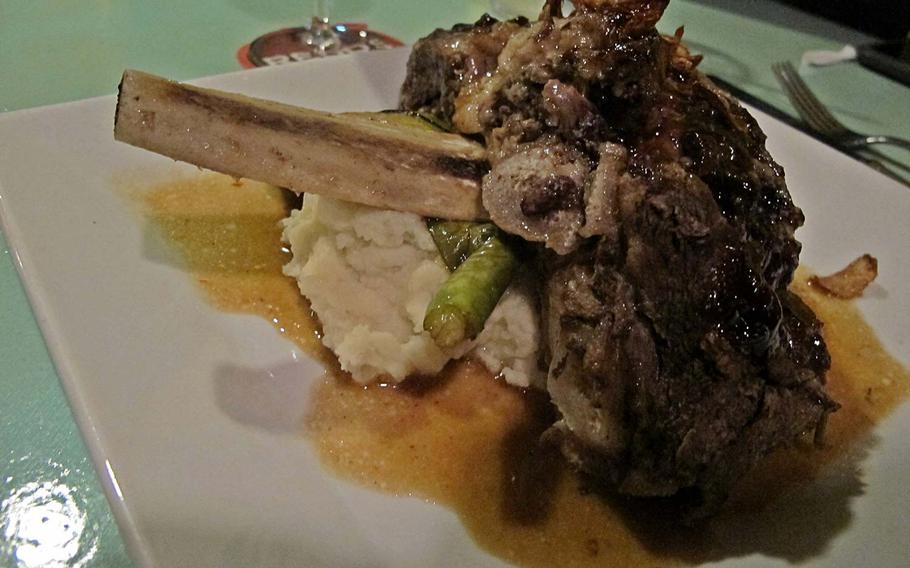 “Da Bone,” a braised short rib on a bed of garlicky mashed potatoes and grilled vegetables, is one of the star attractions at Delmonico’s, arriving in all its juicy, fatty glory. (Erik Slavin/Stars and Stripes)

“Da Bone,” a braised short rib on a bed of garlicky mashed potatoes and grilled vegetables, is one of the star attractions at Delmonico’s, arriving in all its juicy, fatty glory. (Erik Slavin/Stars and Stripes) 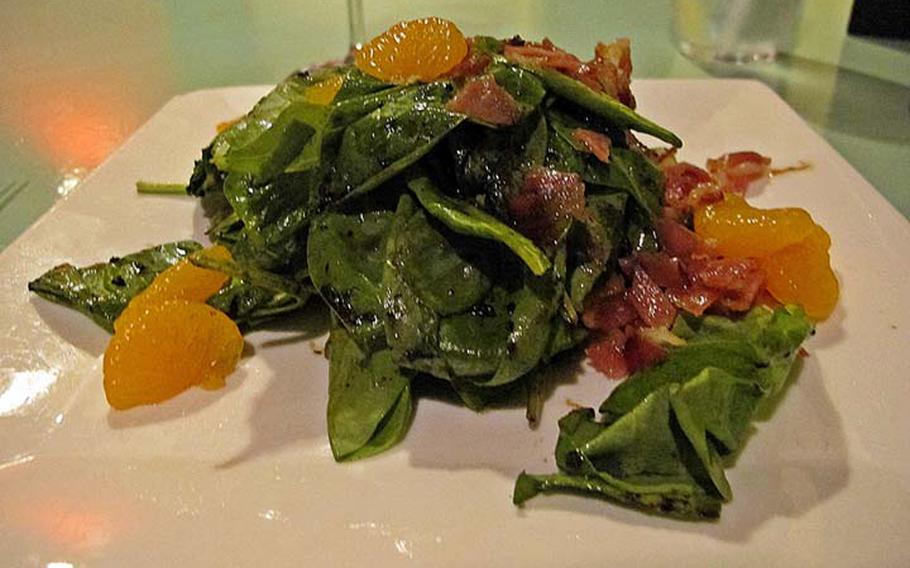 The spinach salad, topped with bacon and mandarin oranges, is available as an appetizer or a meal. (Erik Slavin/Stars and Stripes)

Delmonico’s Kitchen and Bar is on the northern bend of Pale San Vitores Road that joins Guam’s two worlds.

On one end is the majority-Japanese tourist haven of Hotel Row. On the other end is Marine Corps Drive, which runs through Guam’s largest towns and military bases.

In keeping with its location, there are a few nods to Japanese cooking and preferences; meanwhile, the emphasis on steaks and big portions keeps this high-end-for-Guam restaurant thoroughly American in most other respects.

The big draw for most locals is “Da Bone,” a full short rib braised for hours and rested on a garlicky bed of mashed potatoes. Few restaurants take the time to braise, and that’s a shame, because variable heat and liquid do wonderful things to the collagens in an otherwise tough piece of meat.

Da Bone is a very large, flavorful serving, and well worth the $25 price. However, it comes with a lot of fat (it’s meant to), so carnivorous diners who aren’t used to that might opt for a steak instead. Delmonico’s regularly offers four cuts in 13 different styles.

Despite the emphasis on beef, other dishes aren’t the afterthought they sometimes are at similar venues.

The wood-smoked salmon was seared nicely yet still moist. The grilled vegetables on the side were tasty, with one exception: the mushroom somehow soaked up so much salt that it was inedible.

Unfortunately, Delmonico’s ran out of the mesclun greens normally accompanying the dish.

The substituted romaine salad was OK but a bit boring compared to what they’re capable of with salads. For example, their spinach salad is relatively simple, but accents of orange and a healthy toss of real bacon — and not those alien-looking fake bacon bits found elsewhere — liven it up nicely.

Delmonico’s bills itself as a restaurant and bar, and while there is a bar for six customers or so, I wouldn’t consider it for visitors looking for a night out on the town. It’s fine, though, if you’re alone, or happen to be staying at the adjoined Bayview Hotel.

The wine list isn’t long but includes a solid range of mid-range varietals, with emphasis on West Coast appellations like Chateau St. Michelle. Beers are mostly standard lagers, but they do have an IPA and Redd’s ale on tap as well.

Prices: One note to off-island visitors: Delmonico’s automatically adds a 10 percent service charge to the bill. It’s a policy you won’t find much past Marine Corps Drive, but near Hotel Row in Tumon, where most tourists don’t come from tipping culture, it’s a common standard.