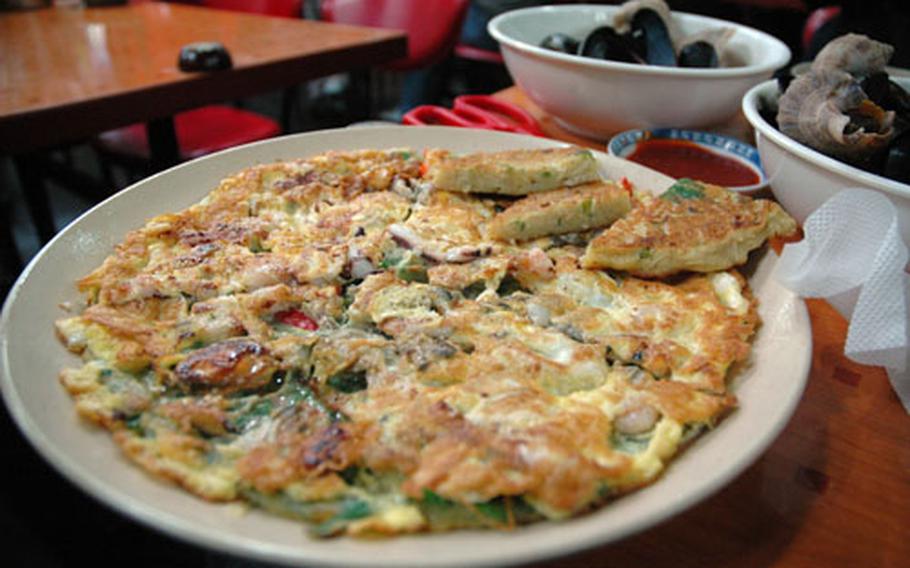 Seafood jeon is one of the more traditional types of pancake. Most Americans order fish or sesame leaf jeon, while Japanese tourists prefer ones with oysters. Koreans like mungbean, which fries up light and spongy, almost like a hash brown. (Teri Weaver / S&S)

Seafood jeon is one of the more traditional types of pancake. Most Americans order fish or sesame leaf jeon, while Japanese tourists prefer ones with oysters. Koreans like mungbean, which fries up light and spongy, almost like a hash brown. (Teri Weaver / S&S) 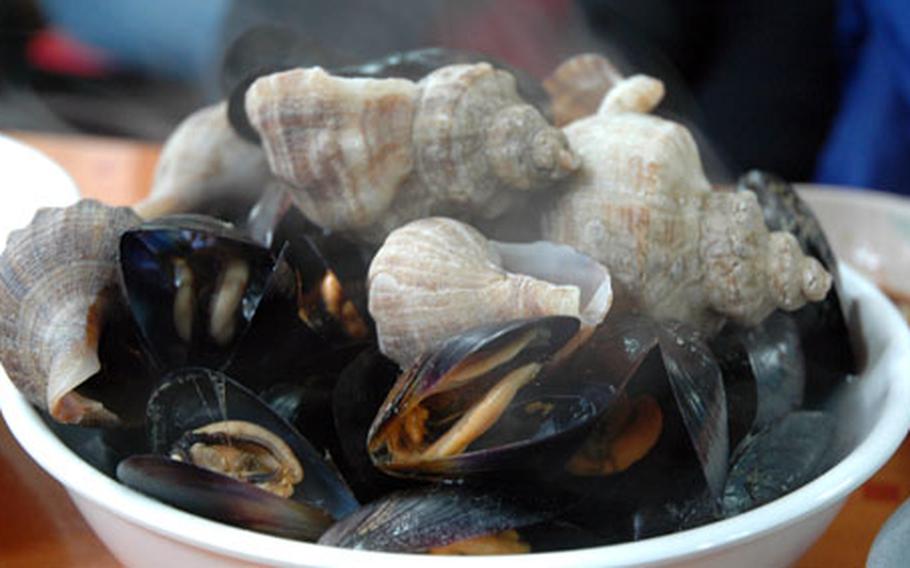 The restaurant has other dishes as well, including these steamed mussels and conches, which cost 6,000 won. (Teri Weaver / S&S) 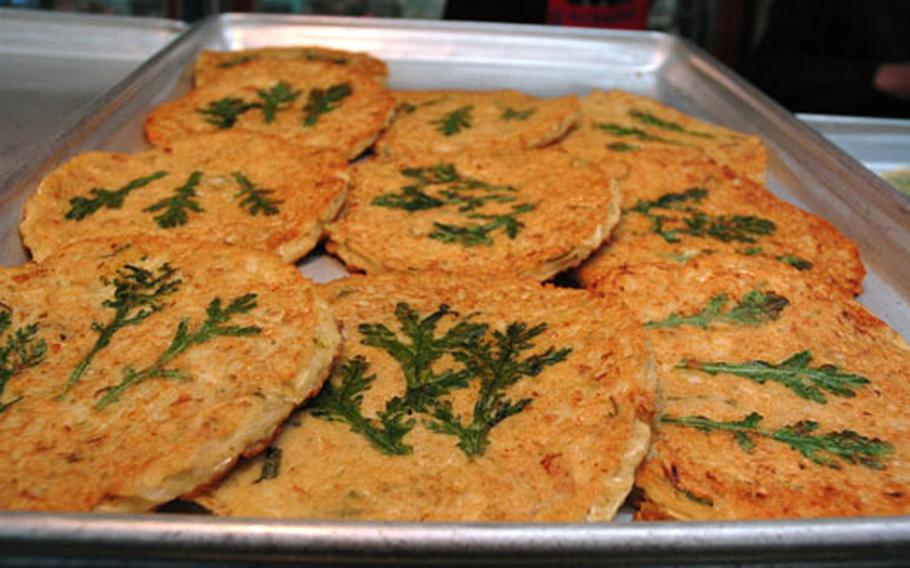 This is jeon: a savory pancake usually filled with onion, kimchi, mung bean or seafood. The restaurant Mapo Halmae Bindaeed Tteok in Seoul has become a destination for jeon and other fried foods. The eatery opened 30 years ago as a stall; now it&#39;s grown into a collection of rooms and counters all dedicated to frying. (Teri Weaver / S&S) 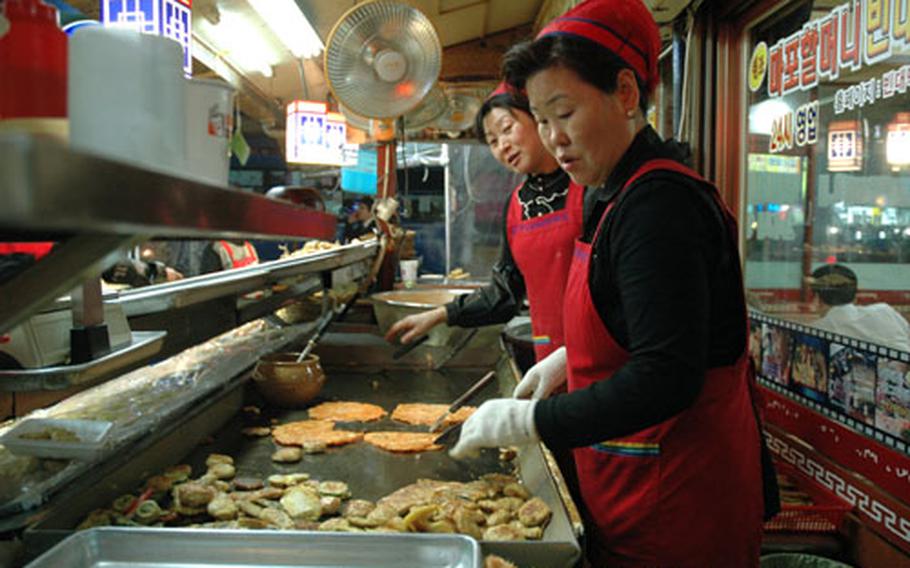 The pancakes are fried to order just outside the dining room. Here, the cooks are making jeon with red pepper paste, which goes well with beer or dong dong ju, a traditional Korean rice wine. (Teri Weaver / S&S)

When we told the cab driver we wanted to go to Gongdeok-dong, he seemed dismayed.

"Why do you want to go there?" he asked. "It&rsquo;s so unhealthy."

This neighborhood in the Mapo district in Seoul is home to twi gim, or fried food alley. The proprietors take this nickname seriously. Piles of deep-fried fish cakes, meats and vegetables of all sorts fill the outdoor stands along two narrow alleys, where fryers and griddles are in a constant state of greasy goodness. You&rsquo;ll smell twi gim before you&rsquo;ll see it.

At the center of it all is Mapo Halmae Bindae Tteok. This restaurant began three decades ago as a stall selling buchimgae or jeon, a Korean savory pancake traditionally mixed with green onions or seafood. It&rsquo;s this pancake, a snack with beer or during holiday feasts, that is the heart of twi gim.

Over the years, Halmae Bindae Tteok grew stall by stall, squeezing into the nooks and crannies of the alley so that now it meanders from one room to the next like a giant beehive. The restaurant&rsquo;s reputation ballooned as well, attracting locals and foreign tourists despite the lack of a foreign language menu, according to Lee Soon-ae, whose mother started the restaurant.

Literacy is not terribly important at Halmae Bindae Teeok. An appetite is. Portions come in big and bigger. A picture menu on the main dining room&rsquo;s back wall helps, though foreigners are welcome to go outside and point out their preferences among the stacks, Lee said.

"You can feel the real atmosphere of what the most ordinary and common Korean people are doing at the traditional restaurant," said Lee, who said the place&rsquo;s popularity grew without advertising. "Nothing is a fake."

The making of each day&rsquo;s batter is a little more complicated.

Seomoon Jeong-ae, Lee&rsquo;s mother, is the &ldquo;grandma&rdquo; who started it all &ndash; the restaurant&rsquo;s name translates to Mapo Grandma&rsquo;s pancake. After 30 years, she still is the only one allowed to mix the batter. She refuses to share her secrets with her daughter or daughter-in-law, but at 72, she also has stopped coming to the restaurant.

Now she mixes the flour, water and oil at home, and restaurant workers ferry the sticky dough across the city, Lee said.

The trip is most definitely worth it.

Lee said the restaurant has been invited by the U.S. military to cook at Yongsan Garrison in the past, and that troops and workers often come to twi gim.

To get to Mapo Halmae Bindae Tteok: Take subway Line 5 or Line 6 to Gongdeok Station. Take Exit 5 and walk toward twi gim, a couple of minutes away.

Know and go ...Buchimgae or Jeon was first eaten in the Koryo Dynasty, which spanned from 918 to 1392. Families would celebrate the first blossoms of spring with flower-shaped rice pancakes. Early on, rice or buckwheat flour was used for the batter, and the cakes were garnished with azalea flowers. Wheat flour and cooking oil were both very scarce, so families would make the cakes with just a drizzle of oil in the pan. Over time, other ingredients such as onion, seafood and meats were added. Now, jeon is a common dish served as a drinking snack or at special occasions, such as birthdays or funerals.