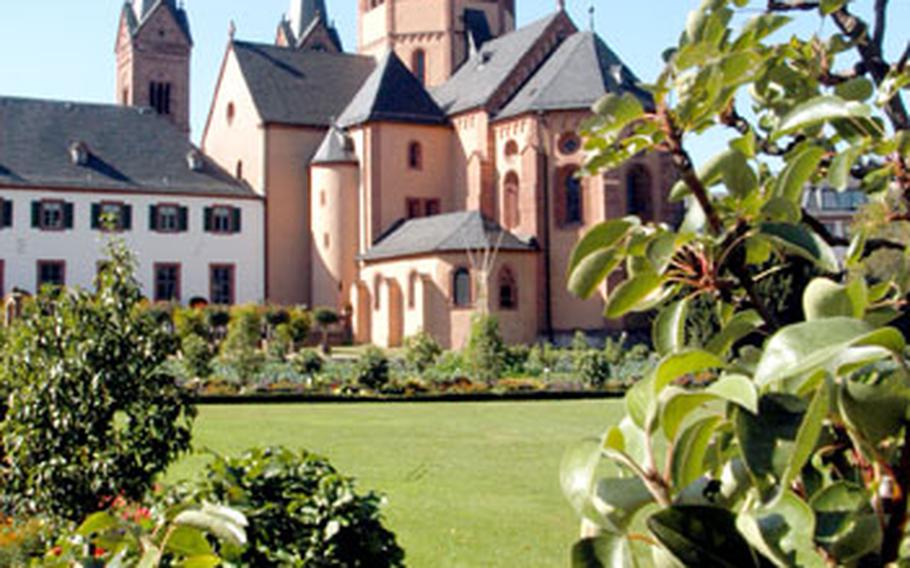 The Seligenstadt abbey’s park and garden sprawl in front of the basilica, the largest of its type north of the Alps. It towers over the former cloister. (Peter Jaeger / S&S)

The Seligenstadt abbey’s park and garden sprawl in front of the basilica, the largest of its type north of the Alps. It towers over the former cloister. (Peter Jaeger / S&S) The entrance to the park and garden of the Benedictine abbey is a Baroque stone archway. (Peter Jaeger / S&S) 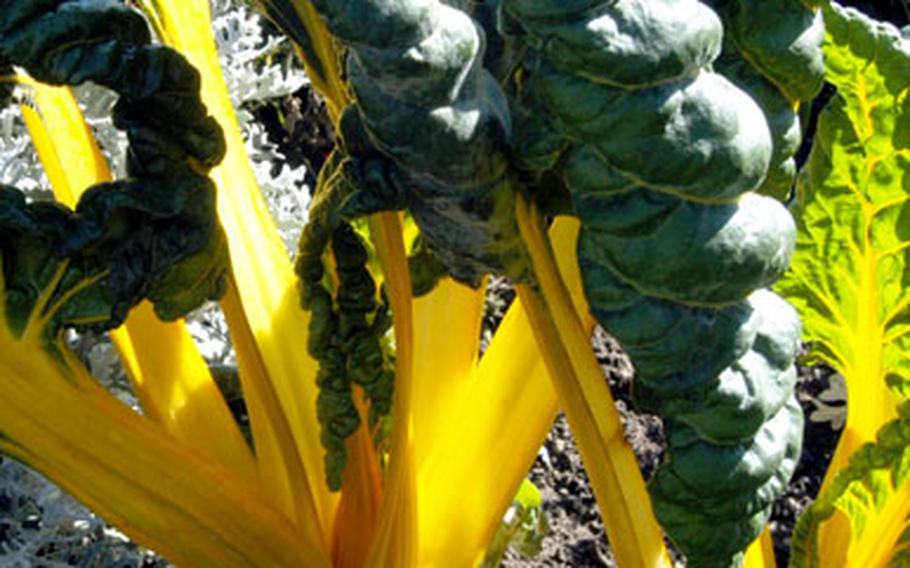 Yellow mangold shines in the late afternoon sun in the garden of the former Benedictine abbey in Seligenstadt, Germany. (Peter Jaeger / S&S) Red mangold in the garden of the former Benedictine abbey in Seligenstadt, Germany. Both yellow and red varieties are for sale at the museum’s shop. (Peter Jaeger / S&S)

If you love plants and gardening and are looking for some ideas for next spring, check out one of the many parks or gardens Germany is famous for while the weather is still good.

A good example is the park at the former Benedictine abbey of Seligenstadt, not far from Wiesbaden and Frankfurt. And when you&rsquo;re done walking the grounds, take some time to explore the abbey.

The abbey and gardens were founded around 830 by a close adviser to Charlemagne. It was enlarged in the 11th and 12th century, and Benedictine monks worked and studied there until 1803 when the abbey was given up.

The gardens were devastated during World War II, but in the years since, with the support and help of the residents of Seligenstadt, they were restored to their old glory, following the old plans and designs.

Surrounded by a stone wall about a half- mile long and covering about 7&frac12; acres, the park and garden offer the peace, beauty and knowledge of a time long gone by.

The park has regained the Baroque look it took on in the 17th century. There are plots with vegetables, fruit trees and herbs for the monks&rsquo; kitchen. An herb garden, featuring medicinal plants, is laid out as it was in medieval times.

Other gardens have a mixture of flowers and colorful vegetables. In one section, decorative plants with glowing red and yellow stems grow amid roses and other flowers. The plants are a type of leafy green vegetable called mangold, similar to chard.

Many of the plants were typically cultivated in the 17th and 18th centuries. They are important for their historic significance and the role they played in the life of the cloisters. Small markers describe hundreds of plants with healing powers and usefulness in cooking.

Several different plants, including both flowers and vegetables, can be purchased in the abbey museum shop.

The abbey buildings are also worth a visit. The abbey has a museum of religious artifacts and other works in both permanent and temporary exhibits.

The nearby basilica was supposedly built from the stones of a Roman citadel by Einhard, a scholar who became Charlemagne&rsquo;s biographer. Einhard is buried inside.

The basilica, the largest of its style north of the Alps, towers over the other buildings, many of which can be visited on tours.

Come December, the abbey is the site of a popular Christmas market &mdash; yet another good reason to pay a visit.

On the QTDIRECTIONS: Seligenstadt is about 10 miles east of Frankfurt and five miles south of Hanau off autobahn A3 at Exit 55. The basilica and the Benedictine abbey with the park and garden are on the north side of the old town near the Main River. You also can park next to the river.

COSTS: No admission charge for the park and garden. Admission to the abbey is 3 euros for adults, 2.50 euros for groups and children, a family ticket is 10 euros.

FOOD: Several restaurants and two ice cream parlors are near the abbey. The Klostercafe is at one side of the abbey garden with an outside terrace and a wide variety of homemade cakes. The only privately owned brewery in southern Hessen, the Glaabs Br&auml;u, has a beer garden that offers traditional German food and a variety of beers.