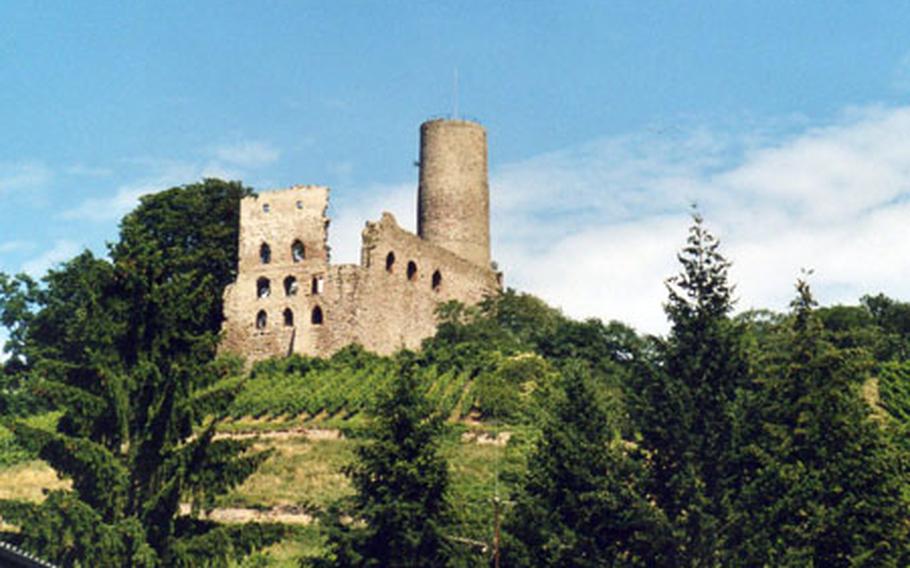 The ruins of the Strahlenburg fortress sit on a hillside above the town of Schriesheim. It offers views of the surrounding vineyards and country side from its grounds and the tower, which can be climbed for a minimal fee. (Mecki Snippen / S&S)

The ruins of the Strahlenburg fortress sit on a hillside above the town of Schriesheim. It offers views of the surrounding vineyards and country side from its grounds and the tower, which can be climbed for a minimal fee. (Mecki Snippen / S&S) 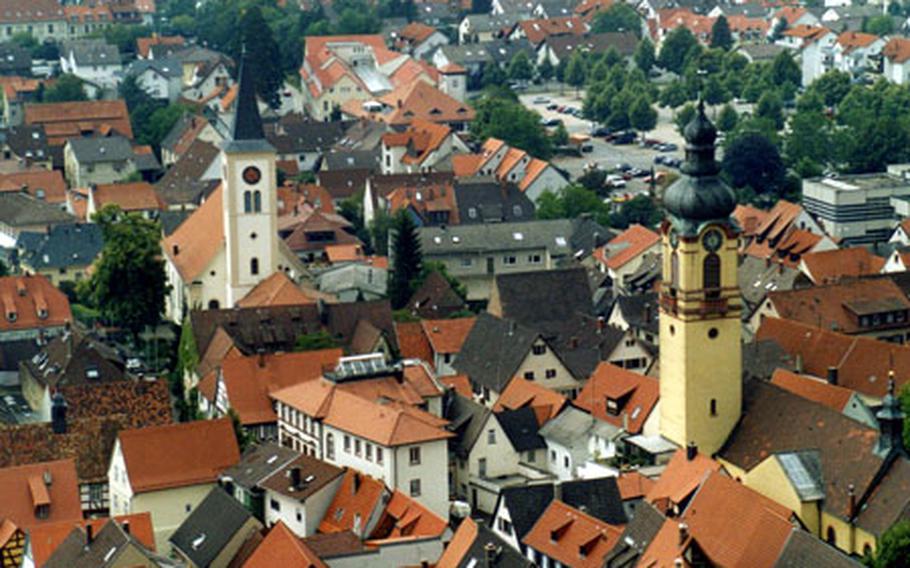 As seen from the Stahlenburg ruins, the towers of two 18th-century churches -- the one in the foreground Catholic, the other Protestant -- rise above the rooftops of Schriesheim. (Mecki Snippen / S&S)

When the Romans occupied parts of Germany in the first and second centuries, among the things they did was build roads and start vineyards.

Nearly 2,000 years later, places like Schriesheim, a town between Heidelberg and Darmstadt, are still benefiting from what the Romans did.

One of the Roman roads was called the &ldquo;strata montana,&rdquo; or mountain road, because it ran along the western end of the Odenwald mountain range. Today, the road is known as the Bergstrasse and the vineyards that flourish along it produce grapes for one of the country&rsquo;s major wine-producing regions.

The road remained an important byway after the Romans left, and Schriesheim became one of the settlements and fortifications that grew up along it to profit from the business and wine trade that passed their way.

First mentioned in 764 when its control was passed to the occupants of an abbey, Schriesheim steadily grew in importance. Around 1250, the Strahlenburg fortress was built on its outskirts by one of the area&rsquo;s ruling families to serve as a stronghold and to keep an eye on the vineyards below. The ruins of the fortress are one of a series you can see in the hills as you drive along the Bergstrasse.

The town of 15,000 inhabitants has a small but attractive old town. The &ldquo;old&rdquo; town hall dates to 1684, although documents indicate it was not the town&rsquo;s first &mdash; there was one there about 200 years earlier.

As an apparent reminder of the Middle Ages, attached to one of the town hall columns is a metal clamp that looks to be just the right size and height to be locked around the neck of a wrongdoer forced to stand on a stone pedestal in the middle of the town as a form of punishment.

In front of the hall is a small fountain with carvings around its base and a pillar rising from the center with the dates 764-1964 &mdash; the settlement&rsquo;s 1,200th anniversary and the year it was officially declared &ldquo;a city.&rdquo;

The town has two churches and several half-timbered buildings among its stores, bakeries, restaurants and wine shops.

It also has what is annually the earliest wine fest along the Bergstrasse.

Those who don&rsquo;t know what to do with themselves now that Fasching is over can head to the city on Friday for the official opening of the 10-day fest.

When we visited the town last weekend, crews were already closing off areas and setting up for the entertainment.

The festival, called the Mathaisemarkt, is named after St. Matthias, whose feast day used to be in late February. It started as a market in the late 16th century and included the selling of horses and other animals.

Now, according to its announced schedule, it appears to be a typical festival, beginning with the crowning of the wine queen on Friday, a parade on Sunday and fireworks from the Strahlenburg ruins on the final day.

In between, there&rsquo;s live music, other types of entertainment and carnival rides &mdash; plus all the food and drink essential for a successful wine fest.

Mecki Snippen contributed to this story.

DirectionsExit Autobahn 5 at Ladenburg/Schriesheim and follow signs to Schriesheim. When the road intersects with B3, turn right, go two traffic lights and turn left. There is a large parking lot on the left (closed for the Mathaisemarkt). If going to the old town, watch for a small brown sign pointing to the Alstadt. If heading for Strahlenburg &mdash; the way is not well marked &mdash; drive past the parking lot and follow the road out of town. Turn right and continue to the Kling Malz plant, then turn right again and follow the road up the hill to a parking lot at the ruins. Or, if you wish, you can walk to the ruins on a path from the town, through the vineyards and up stone steps.

TimesThe restaurant at the ruins is closed during January and February and so is access to the ruins and its tower, which offers good views of the area for those with enough energy and determination to climb it. The opening of the Mathaisemarkt is 8 p.m. Friday, and the closing fireworks are at 9 p.m. March 11. City stores will be open noon to 5 p.m. on Sunday, March 4.

CostsVisiting the town and the ruins is free, although there is a minimal cost to climb the tower. Free parking is available in town and at the Strahlenburg ruins.

There is a handful of restaurants and coffee houses in town, and the Strahlenburg Gasthof serves both food and drink.

InformationFor more on the city, including a festival schedule, see www.schriesheim.de. It is in German only.