Schloss Solitude near Stuttgart doubles as a learning center 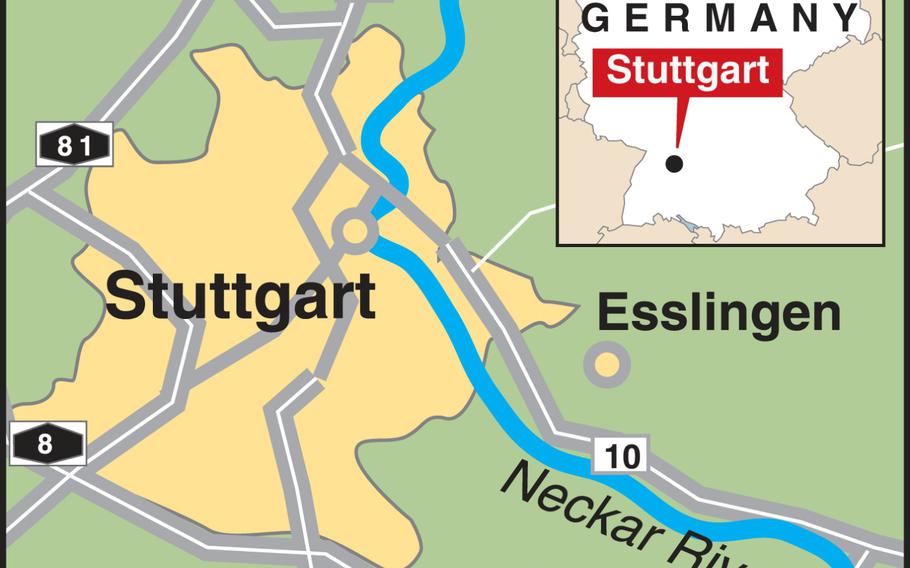 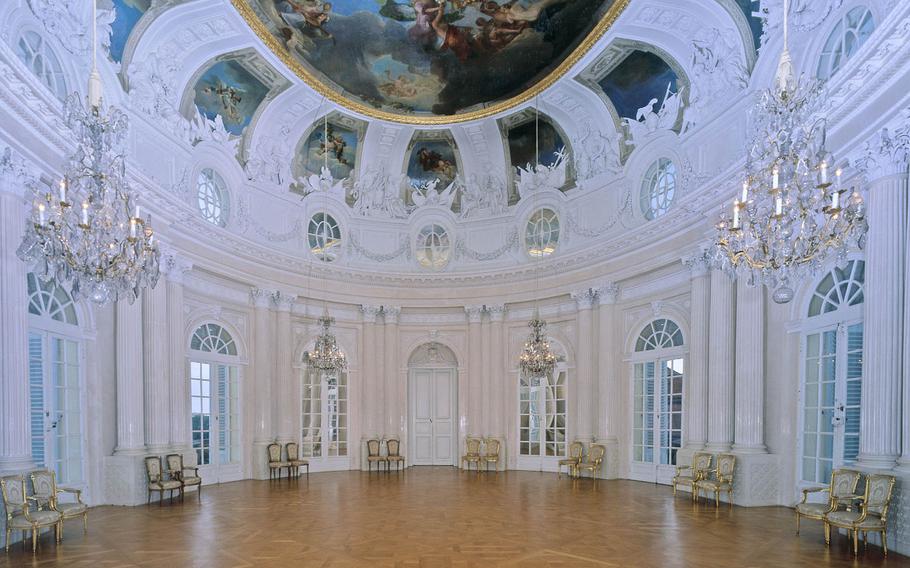 Inside Schloss Solitude near Stuttgart, all the rooms are very well preserved, including this hall, which features a painted ceiling. However, visitors are not permitted to take pictures inside the palace. (Courtesy of Schloss Solitude) 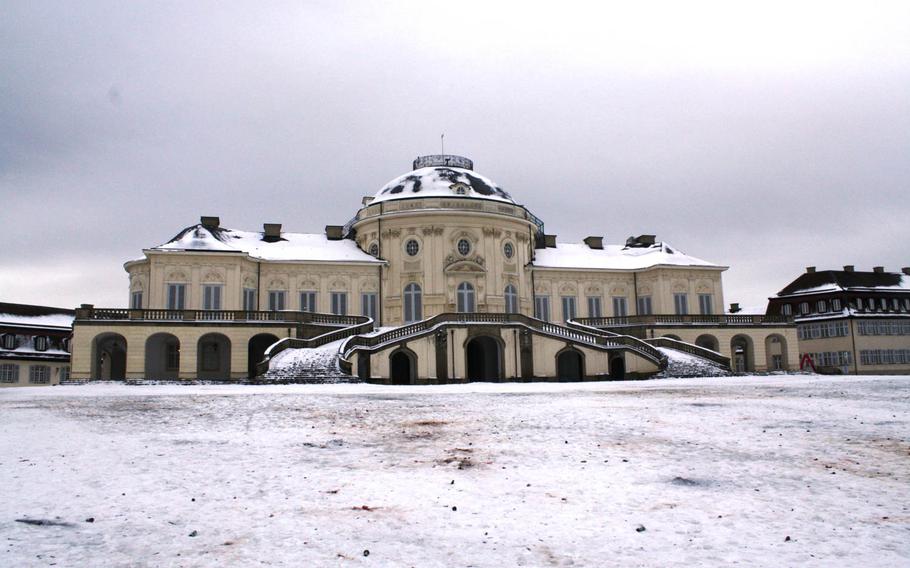 Situated on the outskirts of Stuttgart, the palace was built in the 1760s and was designed to be a summer home for Duke Karl Eugen. Today, the area is a popular destination for locals, who can tour the palace and walk the grounds. (John Vandiver/Stars and Stripes) 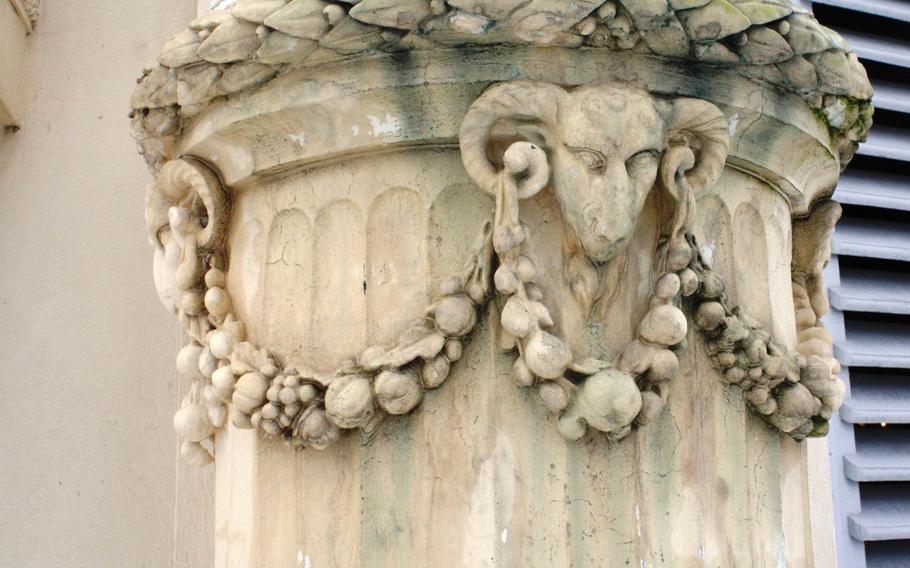 A variety of sculptures decorate the pillars around the Schloss Solitude outside Stuttgart. It was designed in neoclassical style. (John Vandiver/Stars and Stripes) 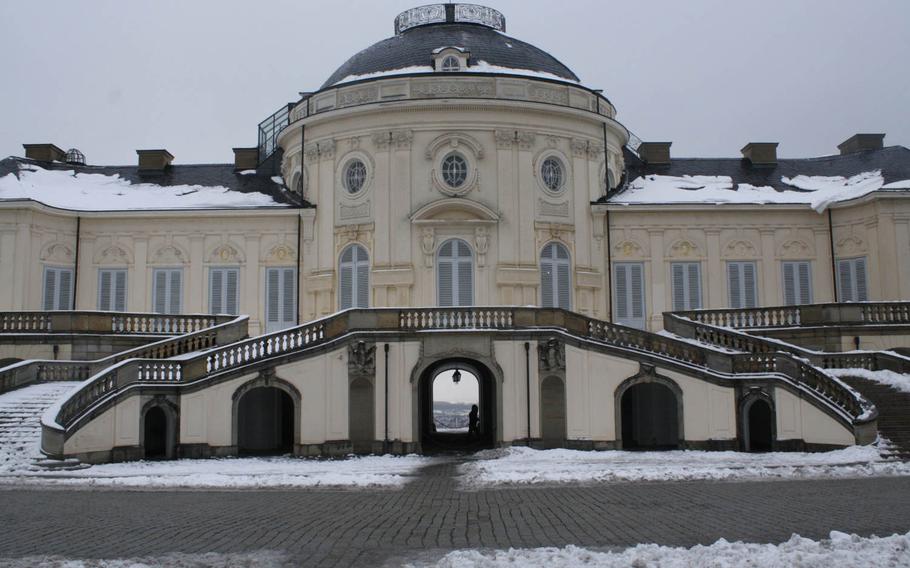 On a chilly January day, the terrace of the Schloss Solitude, typically busy with visitors, is empty. Tours of the inside of the palace are offered for 4 euros. (John Vandiver/Stars and Stripes)

The 250-year-old palace on the outskirts of Stuttgart lived up to its name on a recent wintry afternoon.

During a visit the day after New Year’s Day there was hardly a soul in sight at Schloss Solitude, an old palace positioned on a hilltop that looks out to the city of Ludwigsburg in the far distance.

I made this trip less for a look at the grounds and more for the steep hillside on which the palace sits. When there’s snow, Solitude Palace is one of the more popular destinations in the area for sledding. Sadly, I seemed to have arrived late, because the snow was turning to slush, and the only sign of sleds was track marks from the day before. So, after a less-than-thrilling run down the slope, I had little else to do than to put my sled aside and turn my attention to the palace sitting right behind me.

As things turned out, Schloss Solitude is pretty interesting in its own right.

Work on the palace began in 1763, when Duke Carl Eugen sought to construct a summer residence and hunting lodge. The main view from the palace pavilion looks out to Ludwigsburg. An avenue, which also was commissioned by Eugen, connects Solitude to the Ludwigsburg Residential Palace, which today remains one of the main regional attractions. That route, called Solitude Allee, runs in a straight path for about eight miles between the two palaces and can still be walked today.

Besides the view, the grounds around the palace offer a sense of calm within the city limits of Stuttgart, the region’s bustling capital.

For much of its history, the main palace and surrounding buildings have served as a center for education. In the old days, the complex served as a school for the region’s elite, including the German poet Friedrich Schiller. Today, the complex hosts an arts academy that supports local talent.

Inside the palace, furnishings and decorations in the Neoclassical style are carefully preserved. There’s all the ornate craftsmanship you’d expect from that time: lots of leafy gold trim on the walls, big chandeliers and fancy mirrors. Entrance is 4 euros. But if you aren’t interested in old-time decorating, you can simply skip the tour and wander around outside for free.

Even better, wait for the next big snowfall and bring along your sled.

Getting there: Schloss Solitute is on the western outskirts of Stuttgart, just south of Weilimdorf off K9505. Address: Solitude 1, Stuttgart

Food and drink: There is a restaurant on the palace grounds.

More information:www.schloss-solitude.de. Tours are in German. English guided tours must be scheduled in advance.