Rottweil: Quaint town gets raucous when Fasnet comes to town 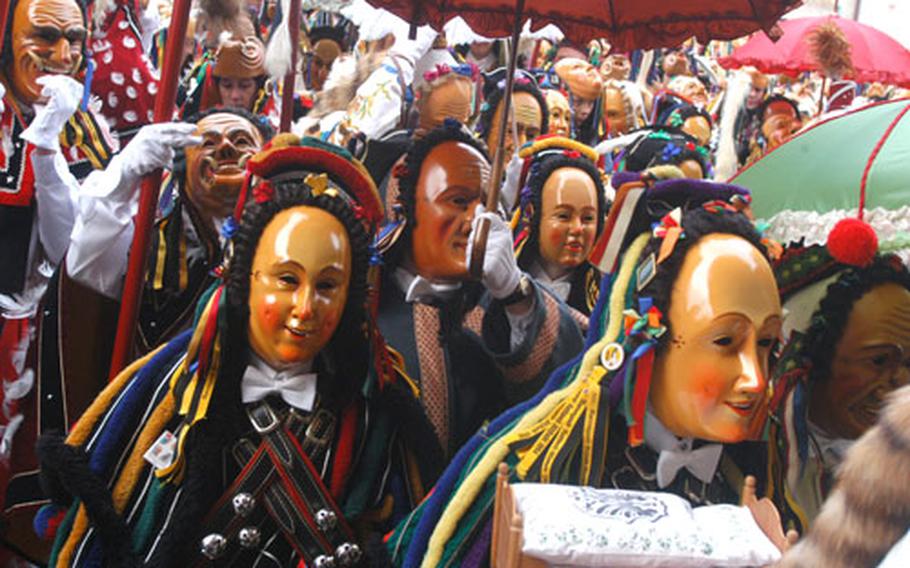 Hundreds of marchers in Rottweil’s Fasnet parade come dressed in elaborate, handmade costumes that are hand-painted and, in many cases, decades old. (Charlie Coon / S&S)

Hundreds of marchers in Rottweil’s Fasnet parade come dressed in elaborate, handmade costumes that are hand-painted and, in many cases, decades old. (Charlie Coon / S&S) 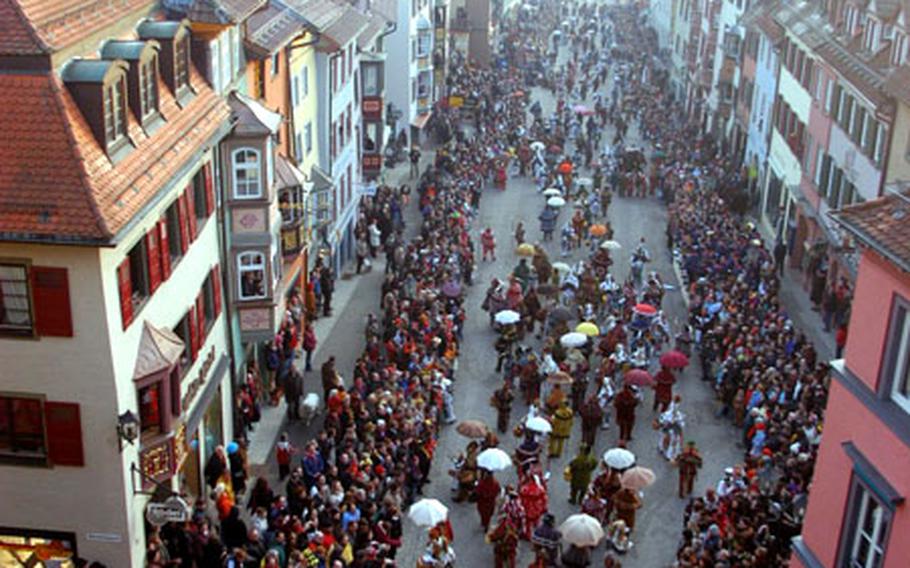 Let the party begin! Marchers lead the way down the streets of Rottweil, Germany, at the start of the 2007 Narrensprung, or fools parade, a renowned Fasnet celebration in the small town on the edge of the Black Forest. . (Charlie Coon / S&S)

More on CarnivalGo carnival crazy:It's the season for parties, parades and silly anticsCelebrating in a big way:Italy&rsquo;s Viareggio celebrates carnival with gigantic, colorful floatsCarnival Events:Celebrations in Belgium, Croatia, France, Germany, Italy and SwitzerlandIt is Saturday night and hardly a restaurant is open.

So this is Rottweil, Germany, home of the Black Forest&rsquo;s famous Fasnet? I ask a kid on the street, &ldquo;Wo ist die Goldener Apfel, bitte?&rdquo; A &ldquo;secret society&rdquo; is meeting there tonight as part of Rottweil&rsquo;s Fasnet rituals. The kid has never heard of the place.

Some people &mdash; observant Christians, mostly &mdash; take Lent seriously. Others take the week leading up to Lent seriously. It&rsquo;s called Mardi Gras, Carnival, Fasching, Carnevale or a variety of other names, depending on where one is celebrating. In southwestern Germany it is called Fasnet.

Rumor has it that Rottweil is one of its flashpoints, with four parades in three days that are famous for their pageantry. But on this catatonic night in small-town Germany, a grand street festival does not seem imminent.

Cologne, Venice and Nice are major cities that host storied pre-Lent blowouts. But the village of Rottweil, population 25,000, is all quaint shops along a sloping, cobblestone main drag lined by street lamps. Atop the hill is a dark, massive arched gateway. More on that later.

OK, time to get this party started. Where the heck is this secret society?

The Goldener Apfel turns out to be a little back-street bar. Its curtains are drawn to prevent people from seeing inside, where the 40 or so remaining members of Narrhalla have convened for their Fasnet ritual.

Rottweil&rsquo;s Narrhalla is a social club that formed in 1888. Its membership used to number in the hundreds. On the Saturday nights before Ash Wednesday, members convened for a raucous, vaudevillian evening of skits, drinking, eating and dancing.

For those who remain &mdash; and it&rsquo;s a senior crowd, to be sure &mdash; the tradition lives.

&ldquo;It is a high point of the year, and is connected with the heart,&rdquo; says 85-year-old Kurt Maier, a member since 1945.

In between the skits, which the members write and perform themselves, two gray-haired men are playing music in a corner of the small bar. Paul is on guitar, Tony on accordion.

Talk about surreal: There&rsquo;s nothing like sitting in on a meeting of a German secret society, most of whom are senior citizens, as they join Paul and Tony in a rendition of &ldquo;Take Me Home, Country Roads.&rdquo; Somewhere, John Denver must have been smiling.

At 1:30 a.m. the little party, an appetizer to the main events, is still chugging and the septuagenarians still dancing. Paul and Tony have been playing for five hours. The Grateful Dead have nothing on these guys.

On the next day, Sunday, the costumed &ldquo;fools&rdquo; officially take over the city.

From a stage built along the main street, down the hill from the hulking stone gate, costumed crazy people surround the beleaguered mayor and berate him for the lousy job he has done.

Unless you know German, you won&rsquo;t understand the &ldquo;crimes&rdquo; of which the mayor is accused. But the verbosity abounds as do the laughs from the crowd, and pretty soon the mayor is out on his backside, relieved of his official duties while the fools throw chocolate coins into the crowd and make way for the parades to begin.

Sunday&rsquo;s Kinderumzug, or children&rsquo;s parade, is a freewheeling parade for the townies, mostly children and teens, the first of four annual parades in Rottweil.

Costumed young people dress up in Mardi Gras-like outfits and march and dance en masse through the towering stone gate and down into the city. From behind masks they anonymously taunt spectators along the parade route, telling them what they really think.

Others are dressed as horses with feathers atop their heads as whip-masters crack their whips to knock the feathers off. It&rsquo;s a bizarre ritual. Crack! Crack! Crack! The whips are cracking all Fasnet long.

&ldquo;It&rsquo;s an art to take the feather from the horse,&rdquo; said Josh Penzely, a longtime resident. &ldquo;It sounds strange but the people love it.&rdquo;

Jello-shots and other intoxicants abound among the drunken teens in the parade. After all, the deprivation of Lent is coming. Now is the time to get your party on.

Between the groups of young revelers, bands from nearby villages march along, playing in perfect rhythm, their resplendent musicians well rehearsed and in tune for the big day.

The children&rsquo;s parade, as crazy and festive as it is, is merely a warm-up for the three mammoth parades to come &mdash; at 8 a.m. Monday, and at 8 a.m. and 2 p.m. Tuesday. Those are the ones that bring in the tourist buses.

The Narrensprung, or fools parades, go for three hours and feature hundreds of marchers dressed in artful, extravagant costumes.

Spectators start arriving at 6 a.m. in freezing temperatures to get good spots along the parade route, a testament to the quality of the show. Many stand on empty beer crates or stepladders to see, as crowds line the street five and six deep.

And what a massive scene!

From behind the black stone gate at the top of the hill &mdash; backstage, if you will &mdash; more than a thousand costumed fools form up. The costumes are heavy, hand-painted and hand-crafted and laden with bells that jangle with every step.

For hours, the marchers take their turn strutting through the Schwarztor, or black gate, and down the hill into the awaiting throng.

As she waited backstage, minutes before her turn arrived, 39-year-old Heidrum Weber was feeling the excitement build. She had been marching in the parade since she was 7, but the thrill was still fresh.

Weber likened the experience of marching through the gate to that of a soccer player entering a sold-out stadium for a big game.

&ldquo;You go through the black gate and look down into the city, and you see all the fools in front of you, and the music is playing, and you feel happy, warm in your heart, and very good,&rdquo; she said.

&ldquo;A football player can do that 20 or 30 times in a year. But we can only do it for two days.&rdquo;

Eight in the morning seems a tad early for a parade, especially in winter, but there is a reason for it.

&ldquo;It is a big parade and it takes a long time, and it gives you more time to party in the street,&rdquo; Penzely said.

&ldquo;As a tourist, you shouldn&rsquo;t leave after the parade. The Narrentreiben (post-parade street party) is an essential part of it.&rdquo;

And so it was.

On its surface, Rottweil seems like a typical small town. It&rsquo;s a pretty place to visit and worth a road trip from nearby cities such as Stuttgart and Heidelberg.

But for a remarkable and truly unique Black Forest experience, go on Monday or Tuesday, Feb. 4 and 5. Take the day off, set your alarm clock for bright and early, and motor on down to Rottweil to join in a really great tradition.