Rosé wines have had a bad rap, but in France, they’re the rage Buy Photo
Rosé is a summer favorite in southern France. French rosés are dry, not sweet. (Leah Larkin / Special to Stars and Stripes)

Buy Photo
Rosé is a summer favorite in southern France. French rosés are dry, not sweet. (Leah Larkin / Special to Stars and Stripes) 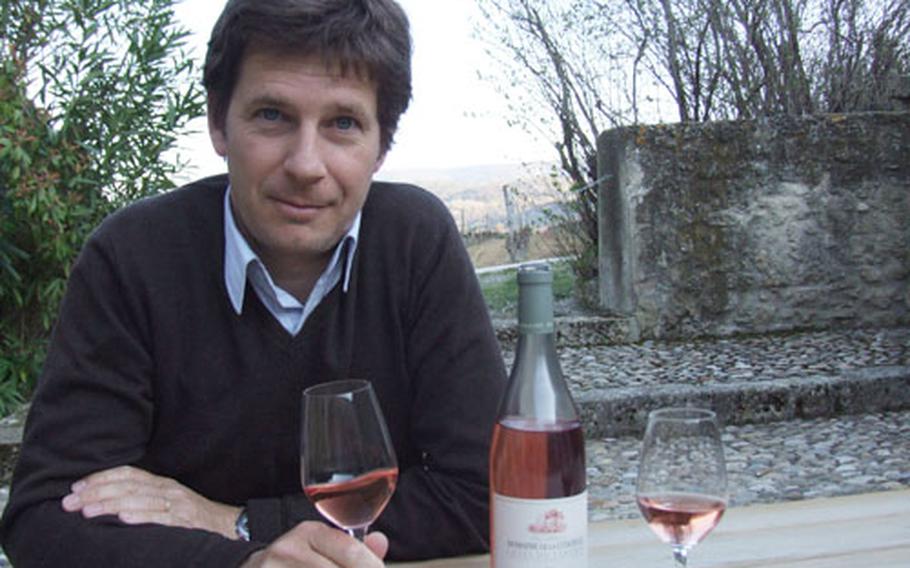 Buy Photo
Alexandre Leclercq of the Domaine du Puy Marquis in Apt, France, says he has noticed an increase in the popularity of rosé wines in the last three years. Rosé, he says, is “convivial in summer.” (Leah Larkin / Special to Stars and Stripes)

More and more people are learning about the pleasure of ros&#233;. Sales of the pale wine are on the upswing. In 2006 ros&#233; increased its share of the French market to nearly 20 percent.

Years ago, ros&#233; got a bum rap. Connoisseurs turned up their noses at what they considered the poor cousin of the great whites, and a veritable pauper when compared with the red grand crus of Bordeaux. Medium-sweet ros&#233;s such as the Portuguese Mateus Ros&#233; and the semi-sweet American blush wines only added to its poor image &#8212; even though French ros&#233;s are dry, not sweet.

Part of the reason for the increased interest is the progress in vinification techniques that has improved wine quality. Today there are two methods of producing ros&#233; &#8212; through skin contact or by the saign&#233;e (bleeding) process.

Red-skinned grapes are crushed and their skins left in contact with the juice for a short period, usually two to three days, until the desired color is obtained. The grapes are then pressed, and the skins discarded &#8212; unlike in the making of red wine, during which the skins are left in contact with the juice throughout the fermentation process.

As the skins contain much of the strongly flavored tannin and other compounds, the longer the skins remain in contact with the juice, the more intense the color of the final wine.

Saign&#233;e is used by vintners who want to make a more concentrated red wine. Some of the pink juice is &#8220;bled&#8221; from the must &#8212; the freshly pressed fruit &#8212; at an early stage. That juice is fermented separately, producing a ros&#233;. The rest is used for red wine &#8212; and since the volume of juice has been reduced, it is more concentrated and the resulting wine more intense.

At one time, ros&#233; was also made by blending, simply mixing a bit of red wine to white wine to add color. The practice is discouraged and has largely been discontinued.

Leclercq uses both the bleeding and skin contact methods to produce his ros&#233;. He says that these days people seem to prefer lighter ros&#233;s.

To achieve a paler wine, he harvests the grapes early in the morning while they are still cold, chills them with their skins for 14 hours, then presses the fruit. &#8220;If they are left longer, there&#8217;s too much color,&#8221; he says.

Grenache, Cinsault and Syrah are the three types of grapes used in his ros&#233;s.

At the Centre du Ros&#233;, a research facility in Vidauban in Provence, a color chart was developed listing the nine tints most often seen in Provence ros&#233;s.

It also compiled a list of phrases to describe the aromas and tastes of the different ros&#233;s. These include &#8220;reflections of raspberry, hints of peach and Mirabelle, or prunes and apricot, exotic fruits in the nose, a touch of mandarin and orange, citrus fruits and flowers, touches of vanilla &#8230;&#8221;

Don&#8217;t let those descriptions intimidate you. Ros&#233;s are generally less expensive than white and red wines, and they are not a wine made to age. They are made to be enjoyed on a summer day.

Ros&#233;s are also produced elsewhere &#8212; including Italy, Spain, even Morocco and Algeria. German ros&#233;, Weissherbst, is made from only one grape variety.