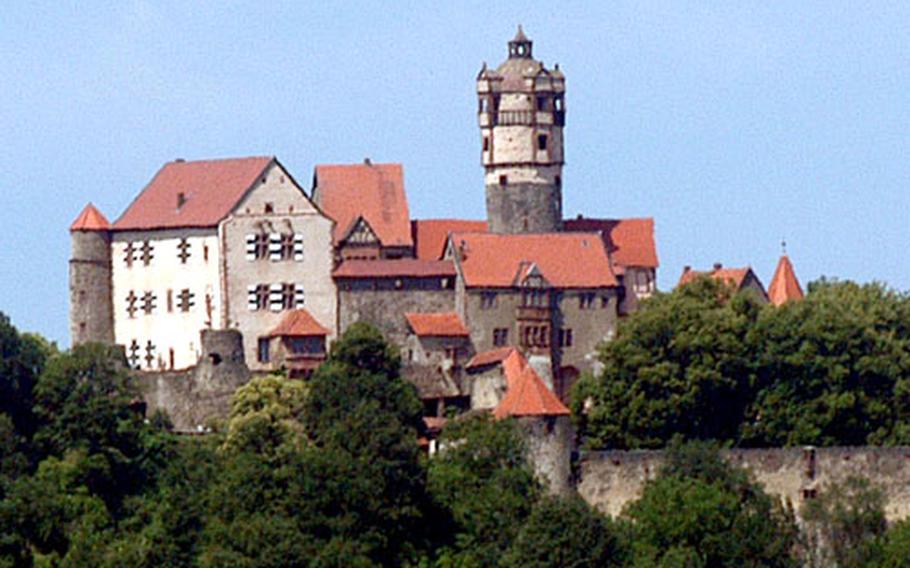 The Ronneburg stands on a hill high above the surrounding hills, fields and villages. It was built in the 13th century, and today is still worth a visit for its medieval events. (Michael Abrams / S&S)

The Ronneburg stands on a hill high above the surrounding hills, fields and villages. It was built in the 13th century, and today is still worth a visit for its medieval events. (Michael Abrams / S&S) At one of the castle’s many medieval events, minstrels dressed in period costumes entertain in the Ronneburg’s inner courtyard. (Michael Abrams / S&S) Armor and weapons await inspection in one of the rooms of the Ronneburg’s museum. (Michael Abrams / S&S) 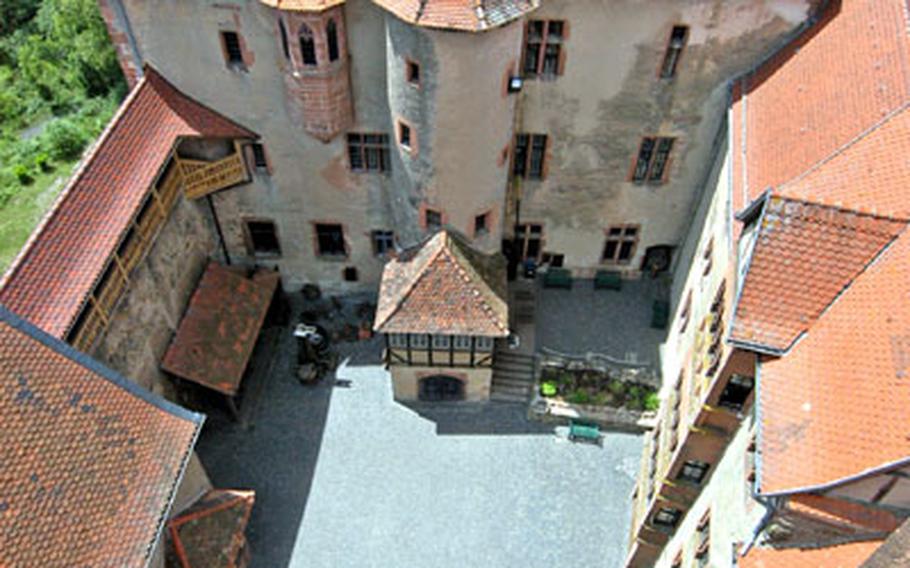 A view of Ronneburg&#39;s inner courtyard and buildings from the castle&#39;s tower. You have to climb 143 steps for this view. (Michael Abrams / S&S)

On a basalt hill, high above the surrounding plains, stands Castle Ronneburg. Consider it a time machine made of mortar and stone. A place where you can step back into the Middle Ages. Or at least see what life was like back then.

The 13th-century castle hosts many events that hark back to the Age of Chivalry. Medieval enthusiasts dress in period costumes for almost-monthly shows that demonstrate what castle life was like. There is a jousting festival on Whitsunday weekend in the spring, and a medieval Christmas market in December.

Or you can just visit the castle and its museum on a quiet day without all the festivities, have a meal at its restaurant and catch the falconry show to top it off.

The castle was first mentioned in a document in 1258. It changed hands many times in its early years, belonging to the bishops of Mainz, the count of B&uuml;dingen and the knights of Rockenburg, before finally falling into the hands of the counts of Ysenburg-B&uuml;dingen, who still own it.

A fire destroyed parts of the castle in 1621, and Croatian troops plundered it in 1634. In the early 18th century, it was home to many Protestant exiles following the Thirty Years&rsquo; War, but after a storm damaged the castle in the mid-19th century, many inhabitants left, the last in 1886.

Over the years, the castle became a popular day-trip destination. In 1905, it was named a protected historical monument, and action was taken to maintain it. It remains a popular place to visit.

A steep, narrow lane leads to the foot of the castle where there is a parking lot. To the right of the castle&rsquo;s outer gate, beneath its mighty wall, is a meadow where the larger festivities, such as the Christmas market and jousting, take place. Enter the outer courtyard through the gate. Here is the castle restaurant, built on the ruins of the royal stables. The entrance to the falconry show is also in the courtyard.

To enter the fortress, pass through another gate, where the ticket office is located. In the same structure is the well house, where, for 20 euro cents, you can illuminate the 317-foot-deep well.

You must pass through another gate house before you enter the inner courtyard and the castle proper. Here is where the knights and counts lived, in two main buildings &mdash; the Palas, the main living quarters, and the Kemenatenbau, the lady of the castle&rsquo;s heated apartments.

Climb up the 143 or so steps to the top of the castle tower. There is an excellent view of the castle below and the surrounding countryside, with its hills, dales, villages and farms. To the west, the monumental structures of today &mdash; the skyscrapers of Frankfurt &mdash; glimmer in the distance.

The museum features, among other things, armor, torture instruments, an apothecary, the bakery and the kitchen.

On a recent visit, embers glowed on the kitchen stove. Hazy smoke swirled through the room. Ancient cooking utensils hung on a wall. On the table was a bowl of onions waiting to be peeled. Across the room on another table sat a wood mug.

It was a scene from a time long past, like a page from a history book. The only thing missing was a cook and the lord of the castle.

On the QT ...Directions: Exit Autobahn 66 at Langenselbold, then follow the signs to Ronneburg and Burg Ronneburg. It is well-marked. From B&uuml;dingen head toward Orleshausen and then south to Ronneburg. There is parking at the castle.

Times: The castle is open 10 a.m. to 5 p.m Tuesday through Sunday from March to November. In February, the museum is open on Saturdays and Sundays. The Medieval Christmas market is the first three weekends in December. The falconry has shows from March to November at 11 a.m. and 3 p.m. Tuesday to Friday; 3 and 5 p.m. Saturdays; and 1 and 3 p.m. Sundays and German holidays. The restaurant opens at 11 a.m Wednesday through Sunday, and serves warm meals from 11:30 a.m. to 2 p.m. and 5:30-9 p.m. Cold plates are served the rest of the time.

Food: The restaurant serves a variety of dishes, from cheese or sausage sandwiches to game, fish and schnitzel with prices between 5 euros and 22 euros.

Information: The German-only Web site is www.burg-ronneburg.de. There is a link to the restaurant and the falconry, which has an English link.