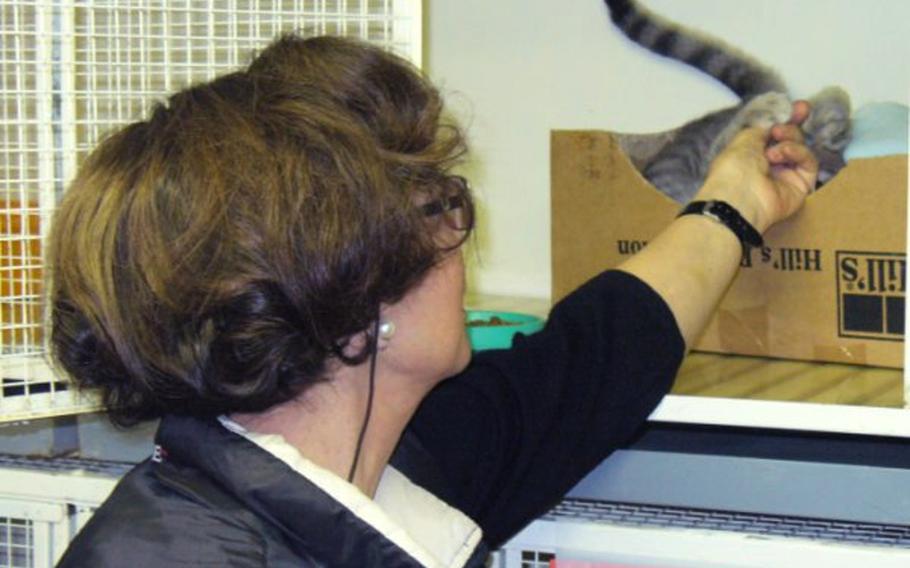 Buy Photo
Lia Dequel, one of the founders of the Torre Argentina Cat Sanctuary, reaches out to one of the cats that hangs around the office. (Jayne Traendly/Special to Stars and Stripes)

Buy Photo
Lia Dequel, one of the founders of the Torre Argentina Cat Sanctuary, reaches out to one of the cats that hangs around the office. (Jayne Traendly/Special to Stars and Stripes) Buy Photo
From behind a clear protective fence, a cat gazes out at the busy Piazza Venezia in Rome. Below street level are an excavation site for Roman ruins and the Torre Argentina Cat Sanctuary, currently home to about 250 stray cats. (Jayne Traendly/Special to Stars and Stripes) 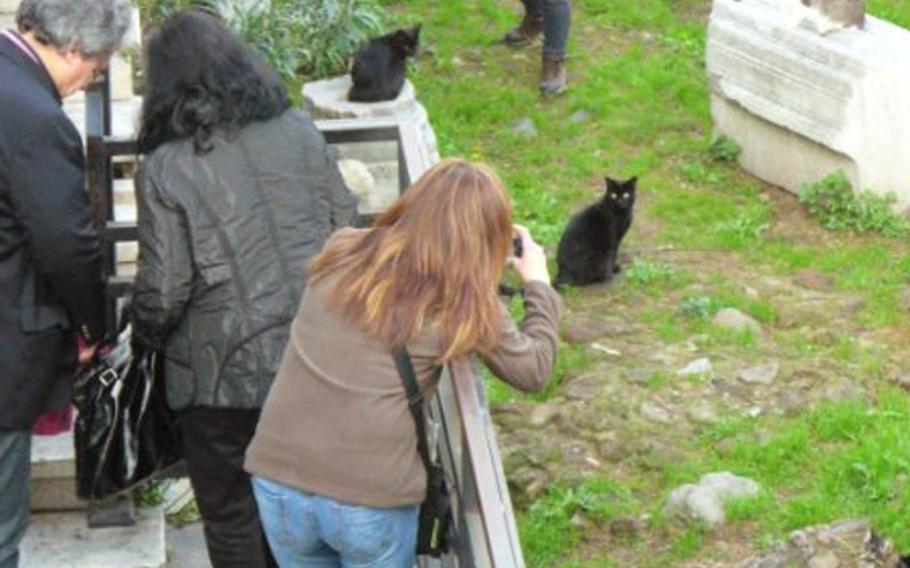 Buy Photo
Tourists visiting the Roman ruins and other curious passers-by often stop by the cat sanctuary to see and photograph the residents. (Jayne Traendly/Special to Stars and Stripes) Buy Photo
A volunteer with the Torre Argentina Cat Sanctuary tends to a group of strays that has settled around the Roman ruins in the section of Rome known as Largo di Torre Argentina. (Jayne Traendly/Special to Stars and Stripes) 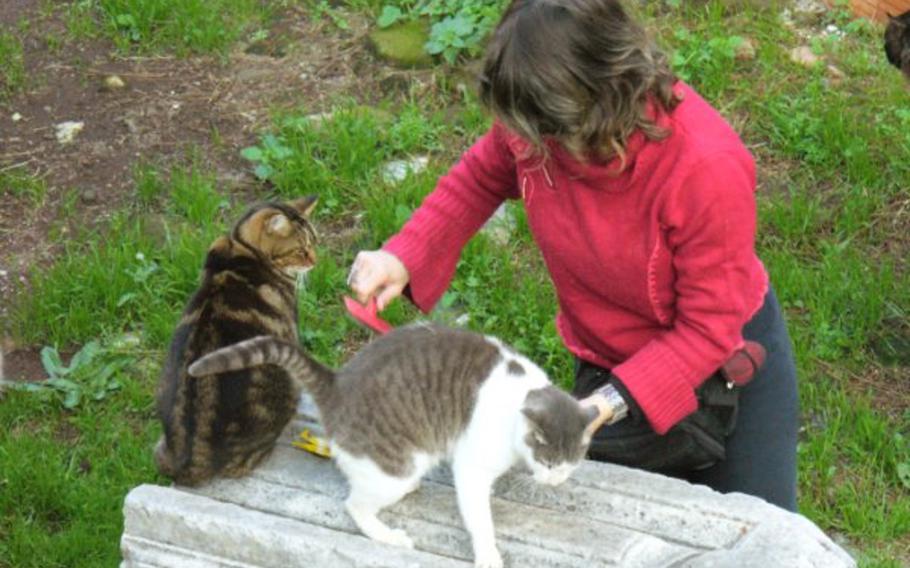 Buy Photo
A volunteer with the Torre Argentina Cat Sanctuary brushes one of the strays that has settled around the Roman ruins in the section of Rome known as Largo di Torre Argentina. (Jayne Traendly/Special to Stars and Stripes)

In the center of ancient Rome, the Republic&rsquo;s armies assembled on the grounds of the Campus Martius, or Field of Mars, before marching off to confront its foes. In later years, sacred temples were built in the southern part of the field as was the Theater of Pompey, on whose steps Julius Caesar was assassinated.

Today, walls fence off a below-street-level square of this former military field and sacred grounds, which are now an excavation site. And living among the ruins are other Roman citizens &mdash; stray cats. They roam over the now-leveled walls, sunning themselves at the broken entrances of what were once holy temples to the gods. They&rsquo;re completely at home in this protected square of history, oblivious to the congestion of the busy Italian streets around them.

They aren&rsquo;t just any cats. In 1991, Rome&rsquo;s city council recognized their historical bond with the city and declared them, as well as the cats at the ruins at the Colosseum and Forum, as part of its &ldquo;bio-cultural heritage.&rdquo;

The recognition, however, didn&rsquo;t translate into city funds. Fortunately, the cats have another patron: the Torre Argentina Cat Sanctuary, set in one corner of the ruins and named after the section of the city where it is located.

Rome is full of cats, an estimated 300,000 of them. By law, Italy has a &ldquo;no kill&rdquo; policy, using instead a &ldquo;trap-neuter-release&rdquo; program for population control. According to a study released in 2006 on managing the feral domestic cat population, this method has helped decrease their numbers. But the study also suggests that unless people are educated about neutering their cats as a means of population control rather than abandoning ones that are not wanted, the program is a &ldquo;waste of time, energy and money.&rdquo;

Lia Dequel, one of the founders of the cat sanctuary, also sees the stray cat problem from a cultural perspective. &ldquo;It&rsquo;s a tradition in Rome,&rdquo; she says. &ldquo;When you see ruins, you can dump your cats. They&rsquo;ll find someone to take care of them.&rdquo;

A small, lively woman with short dark hair, Dequel and Sylvia Viviani, a retired opera singer, took over the sanctuary 16 years ago. Then it was a small, damp cavelike room with no electricity or running water. With the help of volunteers and the Anglo Italian Society for the Protection of Animals (AISPA), they transformed it into a clean, bright refuge with tiled floors, air conditioning and cages. Today the sanctuary takes care of about 250 cats, is run by an international team of volunteers and is supported by donations and proceeds from a small shop.

Cats, either found or dropped off, are vaccinated, seen by a doctor and spayed. If a found cat is healthy, then it goes back to the site from which it was taken, as long as it can provide for itself.

Realizing it was impossible to take in large numbers of animals, Dequel and Viviani decided to focus on a smaller target: disabled cats. Although not all of the cats that live at the sanctuary have physical problems, the sanctuary only accepts those that do, so many of their residents are blind, deaf, one-legged, one-eyed or neurologically challenged.

Inside the sanctuary, the atmosphere is welcoming. In one room, among cages of lounging cats, three blind kittens, unaware of their handicap, tussle with one another and roll around the floor. Iron, a friendly gray-and-white cat, springs on a table and circles to be petted. A ginger cat lies curled up, catnapping in a bowl on top of a microwave. Somewhere, a black cat named Obama is making his rounds.

A little dog trots in. The felines pay no attention.

In Italy, a woman who feeds and cares for stray cats is called a gattara (cat lady). It&rsquo;s not always a flattering term. But Dequel is proud of the label.

&ldquo;Yes, we are Cat Ladies,&rdquo; she says emphatically. &ldquo;And be sure to write that with capital letters!&rdquo;