Romanian wine: Results of long wine-making history swirl in your a glass 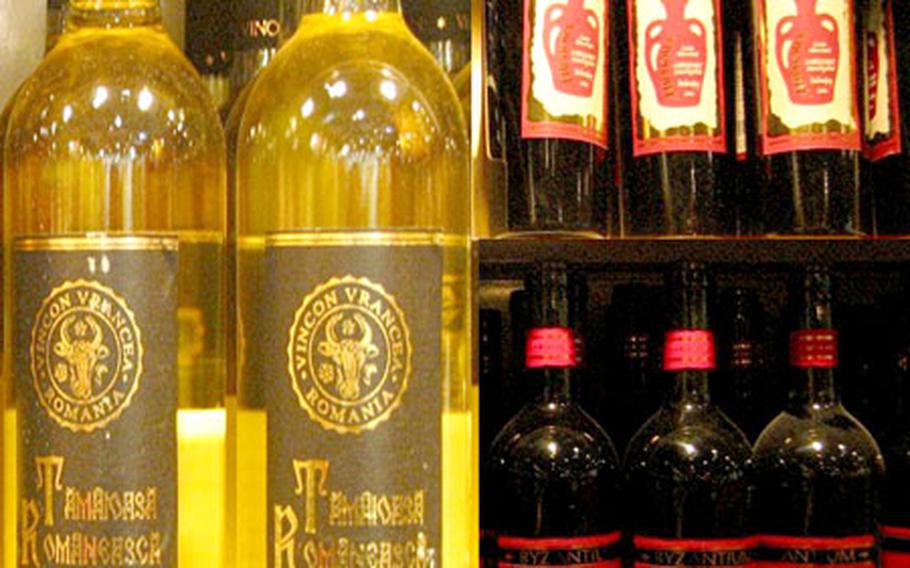 Several years ago during Halloween week, a fine wine store in Manhattan strung up fake cobwebs in its window and displayed a line of wine called &ldquo;Vampire.&rdquo; Being young and into all things Gothic, I bought a bottle to display in my apartment.

It sat on a shelf for a few years until I moved. As I was packing, I took a closer look at the bottle. &ldquo;Made in Romania&rdquo; the label said.

&ldquo;Hmm, who knew Romania made wine?&rdquo; I mused. How much more ignorant could I have been? Romania has one of the oldest histories of winemaking in the world.

According to legend, Dionysus, the Roman god of wine, was born in the Dacian territory that is now Romania. According to archaeological evidence, the production of wine in this area predates even the Romans&rsquo; presence.

When the Romans did conquer the area in 106, all coins issued in the new territory were minted with the symbol of a woman to whom two children are offering grapes &mdash; a clear sign of one of the region&rsquo;s main assets.

Sine then, winemaking has proceeded without interruption. Among the wines that have been in production for up to 2,000 years are Grasa de Cotnari, Feteasca Alba, Feteasca Regala, Babeasca Neagra, Feteasca Neagra and Tamaioasa Romaneasca.

In the 18th century, a close relationship with France led to the importation of several French wine and grape varieties, including Pinot Noir, Cabernet Sauvignon, Merlot, Chardonnay and Sauvignon Blanc.

The success of these French imports is understandable when you remember that Romania and France lie at the same latitude, and their climate, soil and sun exposures are essentially the same. In fact, in Europe only France and Romania are capable of producing the whole range of wines: from white, dry, fresh ones to red, highly flavored wines and sweet dessert wines.

Because of Romania&rsquo;s strict isolationist mandates during its communist years, Romanian wines were kept away from the Western world. After 1989, all of Romania&rsquo;s vineyards were privatized and though the wineries experienced growing pains, they are finally beginning to reach the world market. According to the Association of Wine Exporters and Producers, Romanian wine exports in 2004 stood at about 35 million euros, well above 2003&rsquo;s exports.

The No. 1 export destination for Romanian wines is Germany, where the red wine Feteasca Neagra is popular. These are dry or semi-dry wines fermented in the Moldovan region. Its robust flavor resembles black currant and is enriched by aging.

The second most important export destination is the United Kingdom, where Pinot Noir and Pinot Gris are the most popular.

Among Romania&rsquo;s wineries, the largest exporters are Vinia, Cramele Recas, Halewood, Murfatlar, Carl Reh Winery and Cotnari; all of these brands are available in Germany, the U.K. and the United States.

The Cotnari winery was awarded the European Union&rsquo;s Excellence Quality Diploma in 2004. Its Feteasca Alba 2003, a medium-dry white, also won a gold medal at the 2004 International Wine Contest in Bucharest. Cotnari recommends this wine for appetizers and desserts. Murfatlar won several awards at the same contest, including its Cabernet Sauvignon 2001 (silver) and Pinot Gris 2003 (gold).

Tasting one of Romania&rsquo;s most authentically Romanian wines, Tamaioasa Romaneasca, is a must. These flavored wines, very popular in Belgium, are sweet or semi-sweet white and are distinguished by their yellow-golden color, and complex rich flavor resembling wild flowers and honey.

Dori Saltzman is a freelance travel writer living in Romania. E-mail her at: devorah@pipeline.com.