Río Vero: Spanish park has all the thrills of the canyoning experience 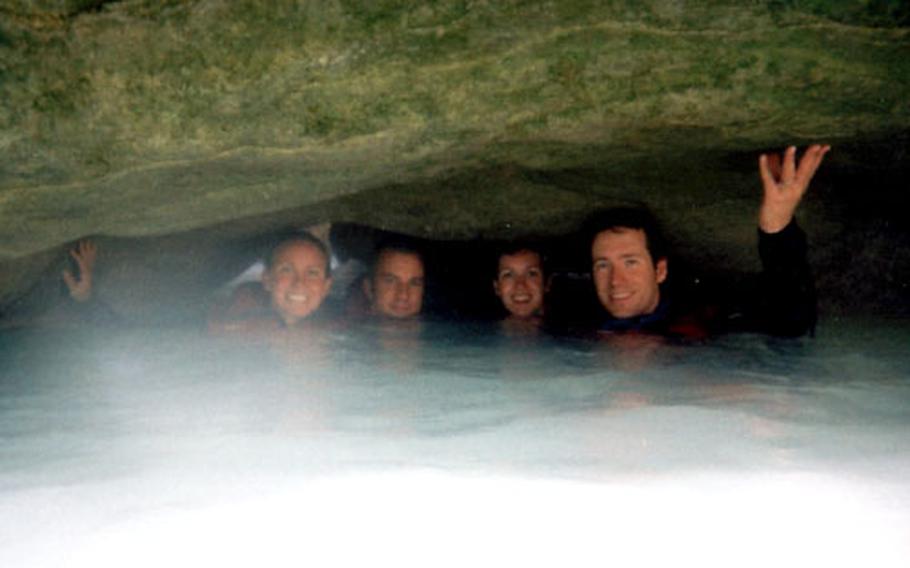 Canyoners — water up to their chins, a rock ledge above their heads — take a break for a group photo before moving on down the Vero River canyon in Spain&#39;s Parque de la Sierra y los Cañones de Guara. (Sarah Andrews / Special to S&S)

Canyoners — water up to their chins, a rock ledge above their heads — take a break for a group photo before moving on down the Vero River canyon in Spain&#39;s Parque de la Sierra y los Cañones de Guara. (Sarah Andrews / Special to S&S) 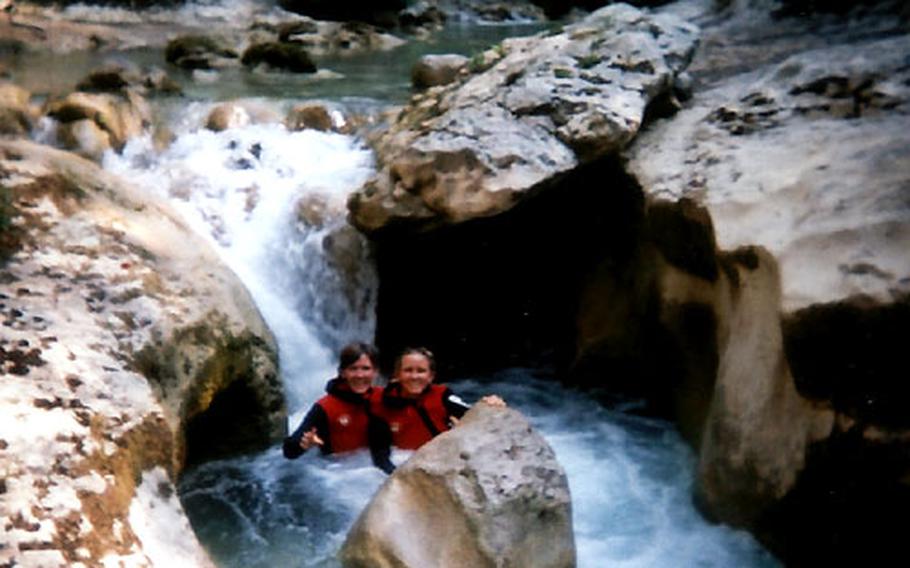 Sarah Andrews and her sister, Mary, take a beak behind a boulder in the middle of a whirlpool while canyoning in Spain&#39;s Parque de la Sierra y los Cañones de Guara. (Sarah Andrews / Special to S&S) 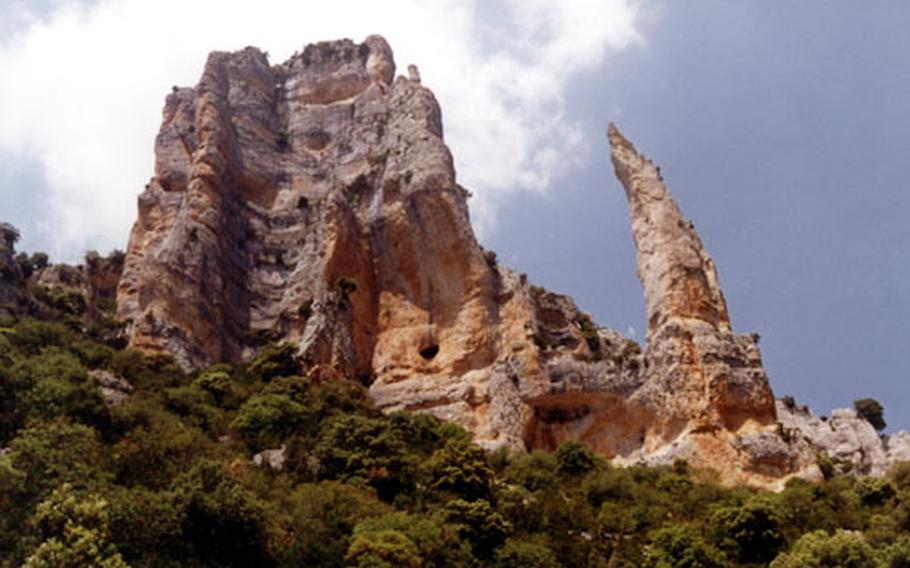 This rock formation, called La Citadella, is typical of those found in Spain’s Parque de la Sierra y los Cañones de Guara. This one is in Mascun Canyon. (Sarah Andrews / Special to S&S) 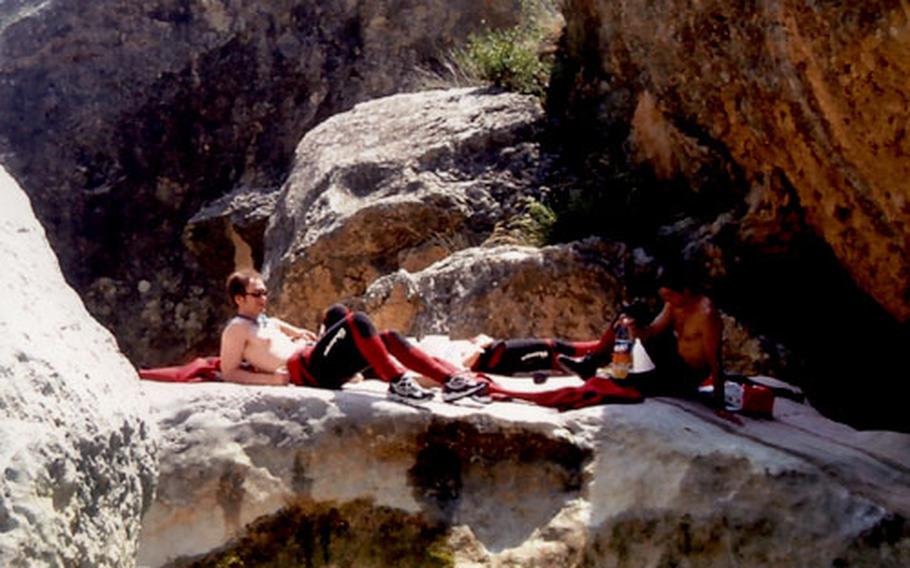 Miquel Torres, the writer’s husband, and Sergio, the canyoning guide, right, take a lunch break in the sun before continuing down the Río Vero. (Sarah Andrews / Special to S&S) 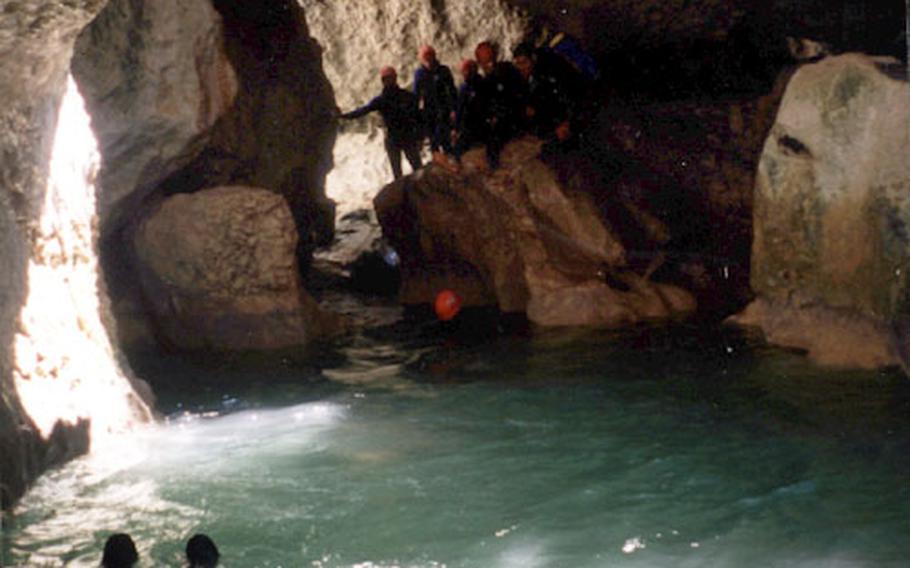 Canyoners on a rock outcropping prepare to join others in the Rio Vero. (Sarah Andrews / Special to S&S)

&ldquo;Don&rsquo;t look down, just jump!&rdquo; yells Sergio, my canyoning guide, as I perch on the impossibly small, slick tip of a 15-foot-tall boulder beside the R&iacute;o Vero, in the Spanish Pyrenees.

I want to be brave, but the image of my body splattered on the rocks beside the river below just won&rsquo;t get out of my mind. I hesitate, wondering if maybe the smartest thing to do is climb back down the way I came up. I draw my foot away from the boulder&rsquo;s edge, but it&rsquo;s too late. Sergio has sent me flying into the river with a shove and a laugh.

A squeal, a splash and a shot of icy cold water up my nose, and that&rsquo;s it. I&rsquo;ve made my first jump into the Vero, and I come up grinning.

Sergio, a guide who&rsquo;s been navigating this river since he was a child, is leading four novices down the R&iacute;o Vero, the most popular river canyon in Arag&oacute;n&rsquo;s Parque de la Sierra y los Ca&ntilde;ones de Guara.

Every year, thousands of enthusiasts of canyoning (also called canyoneering) from across Europe and beyond make the six-hour trek down the river, squeezing into wet suits and rubber-bottomed boots to tackle thrilling boulder jumps, rock climbing, natural waterslides and waterfalls. And every year the river claims lives, usually those of inexperienced canyoners who forgo a guide service and misjudge the strength of the river.

I&rsquo;m not about to make that mistake, and I happily hand over 40 euros to the canyoning outfitter Gu&iacute;as Lecina to be dressed with neoprene head to toe and guided down the rushing Vero.

My first jump completed, things are momentarily calm. I&rsquo;m floating lazy-river-style through a narrow tunnel, with huge limestone walls rising on either side as the greenish- blue Vero carries me downstream. The rocks on the river are covered with a crusty white layer of lime, giving them the clean, almost fake looks of theme-park rocks.

But one look around and it&rsquo;s obvious that humans had little to do in creating this natural paradise. Cliffs dotted with caves tower high above, and nearby, vultures fly in circles. The sky is an intense blue, but the rock walls surrounding us are so high that little direct sunlight reaches the bottom.

Down here on the river, we gaze at the lush greenery lining the bank and gawk at fabulous water-sculpted rock formations. Sergio invites us all to take a sip of the clean water of the Vero, but we don&rsquo;t dawdle long, and soon we&rsquo;re entering into the first &ldquo;chaos zone,&rdquo; one of several caves formed by boulders that fell ages ago from the cliffs above.

&ldquo;Now it gets exciting,&rdquo; says Sergio as he hops fearlessly from rock to rock, reminding me of the mountain goats that are common in these parts. He perches beside a rushing torrent of water that disappears down a hole, and motions for us to come closer. My sister, Mary, who&rsquo;s visiting from the States, gets to be the guinea pig and go first.

&ldquo;Put your hand here, and lean back on the rock,&rdquo; Sergio instructs, his voice straining so that we&rsquo;ll hear him over the roar of the water. &ldquo;Slide one foot down the hole, and when your toe touches the rock ledge, jump off it!&rdquo;

Mary peers down the hole, which has no visible outlet, and nods to say that she understands directions. Sergio takes her hand and places it on the rock. A quick jump, and she&rsquo;s gone, her head disappearing under the torrent. I can&rsquo;t hear anything but the rushing water as I take a deep breath and follow along, a little unsure of what I&rsquo;m getting into but willing to follow Sergio&rsquo;s advice.

The jump is thrilling, and it&rsquo;s no exaggeration to say that I feel at one with the river as I rush down with it. The torrent deposits me in a quiet pool inside a dimly lit cave. Where there was roaring white water moments before, now there&rsquo;s peace and stillness. A little bit of sunlight filters through the rock above us, casting an eerie greenish glow around the cave.

I&rsquo;d be content to float here the rest of the day, marvelling at the magical place we&rsquo;ve discovered. But Sergio motions for us to move on. It&rsquo;s only 11 a.m., and we have more than five hours of river ahead of us.

The next obstacle is a narrow passageway made of two rock walls standing less than a foot apart. We have to squeeze between them. I stop mid-tunnel and try to take in my surroundings: a quiet river cave, hidden from the world beneath ancient rocks and traversed only by the waters of the Vero and the groups of canyoners who interrupt the sanctuary. I&rsquo;m reluctant to leave this beauty behind but curious about what comes next.

The rest of the day is full of nonstop wonder. We jump off a half- dozen boulders, each one taller than the next. Before long, I get the hang of things and &mdash; almost &mdash; lose my fear of slipping. Farther down the river, we zip down a natural waterslide and, later, push our heads through a waterfall to stand in the tiny cave hidden behind it.

Along the way, Sergio stops to point out interesting plants or bugs, and once he crouches beside the riverbank where the mud, he says, is excellent for the skin. Before I can object he&rsquo;s smeared it all over my face, and a mini mud war breaks out, leaving us with silty mud in our hair, ears and even our teeth. We laugh, snap a picture, and move on.

We can&rsquo;t stop ooh-ing and ahh-ing over the rocks, the caves, the plants, the birds, the pools, the waterfalls &hellip; And I can&rsquo;t stop taking pictures with the waterproof camera that&rsquo;s tied with a rubber band to my wetsuit. I know that there is no way to capture this wild beauty with a plastic disposable camera, but that doesn&rsquo;t stop me from trying.

When we finally climb out of the river and peel off our wet suits, I feel as limp as the neoprene suit I&rsquo;ve left lying on the riverbank. We&rsquo;ve trekked more than four miles through rushing water, stopping only once for a quick lunch of sandwiches carried along in waterproof plastic containers. Adrenalin and excitement keep me going all day, but when the trek ends, exhaustion descends like a heavy blanket.

Sarah Andrews is a freelance writer based in Barcelona, Spain.

Canyoning is, literally, the exploration of canyons. There are &ldquo;wet&rdquo; canyons, like the Vero, and &ldquo;dry&rdquo; ones, which may follow an old riverbed, a rocky cavern or other waterless places.

The Vero River canyon is popular with beginners because it requires little technical skill. However, there are canyons in the area for all tastes. Many require you to rappel down waterfalls or cliff faces, or to undertake serious rock climbing. There are dozens of canyons waiting to be explored in the Parque Natural de la Sierra y los Ca&ntilde;ones de Guara &mdash; one of the world&rsquo;s top destinations for the sport.

The la Sierra de Guara was declared a natural park in 1991. It is nearly 125,000 acres of rough mountains, deep caverns, caves and rivers, providing a natural home for canyoning. Beyond the rivers and canyons, the park offers great hiking and unbeatable rock climbing. It&rsquo;s also home to a large variety of birds. Humans have been living in the area since the Paleolithic age, and you can see a few cave paintings that have survived from that time.

The park is in Huesca, in the northeastern Arag&oacute;n region. Its main gateway, and the place where you&rsquo;ll find the most accommodation and guide services, is the medieval town of Alqu&eacute;zar. It is 270 miles northeast of Madrid and 160 miles northwest of Barcelona.

For friendly, competent canyoning guides, try Gu&iacute;as Lecina at www.campinglecina.com (in Spanish) or (+34) (0) 974-318-386. Prices start at 40 euros per person for the Vero River, and increase for more difficult canyons and more equipment. Generally, prices range between 40 and 60 euros each for the day. At Lecina, equipment &mdash; wet suit, optional helmet and backpack &mdash; are included in the price, but this is not always the case.