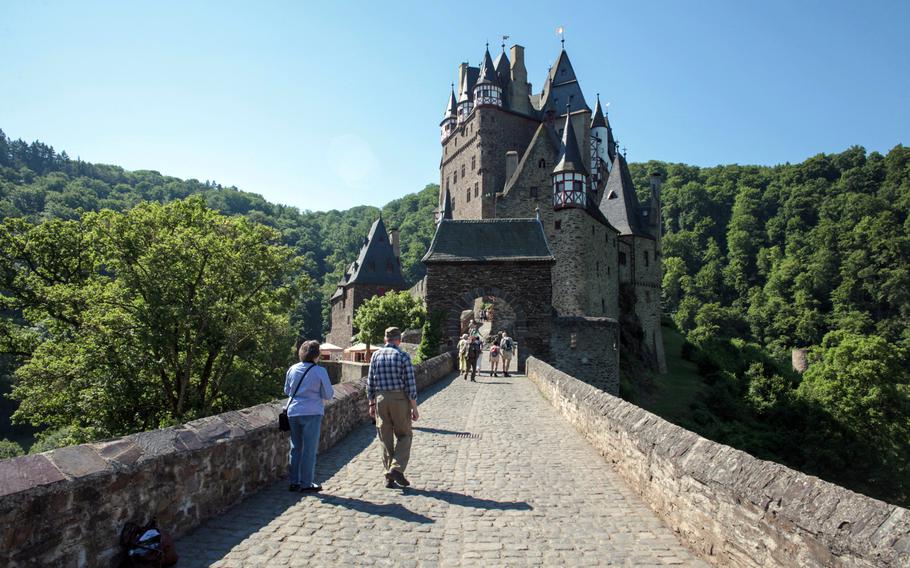 Buy Photo
The easiest route to Burg Eltz involves parking about a 10-minute walk away, then either hiking or taking a shuttle to the foot of a causeway that takes you across the valley floor to the castle. (Matt Millham/Stars and Stripes)

Buy Photo
The easiest route to Burg Eltz involves parking about a 10-minute walk away, then either hiking or taking a shuttle to the foot of a causeway that takes you across the valley floor to the castle. (Matt Millham/Stars and Stripes) Buy Photo
Centuries after the first stone was laid for Burg Eltz in Germany's Rhineland, Eltz family descendants finished it in 1615 as an eight-tower citadel with more than 100 rooms. An inner courtyard displays the varied styles the three branches of the family used to build their homes. (Matt Millham/Stars and Stripes) 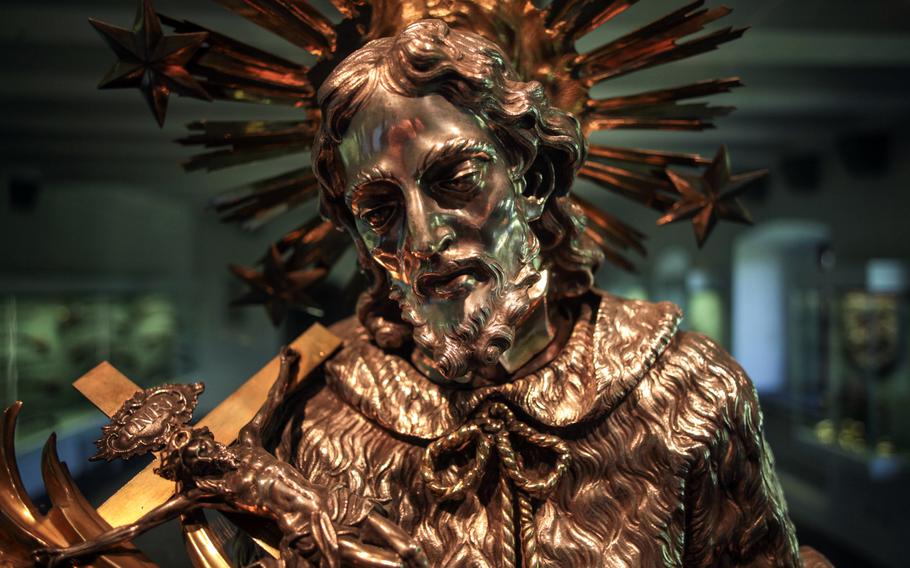 Buy Photo
The treasury and armory at Germany's Burg Eltz is filled with fine works of gold and silver, jewelry, religious items and other works of art, such as this silver and gold statue of St. John of Nepomuk. (Matt Millham/Stars and Stripes) 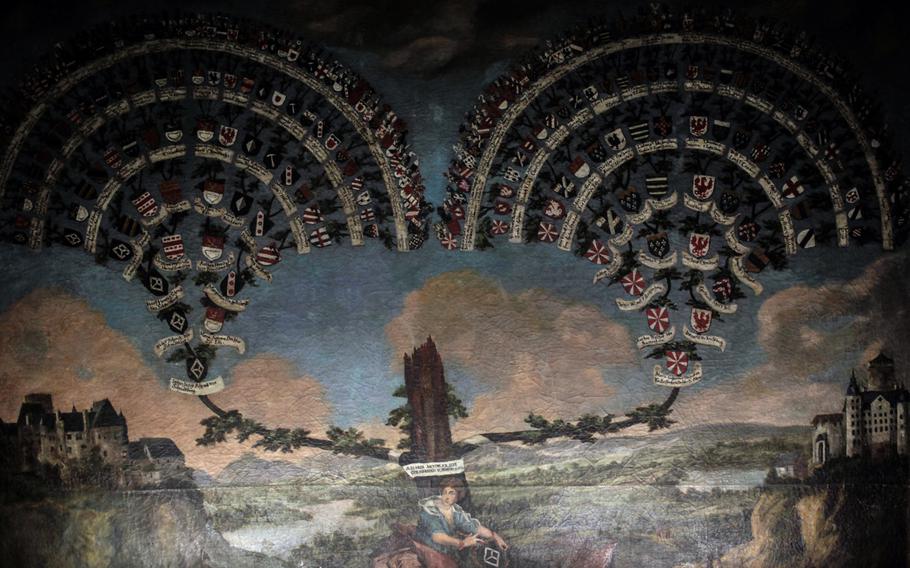 Buy Photo
Along with weaponry and valuables, the treasury at Burg Eltz in Germany's Rhineland also houses artworks depicting lines of the Eltz family tree. (Matt Millham/Stars and Stripes) 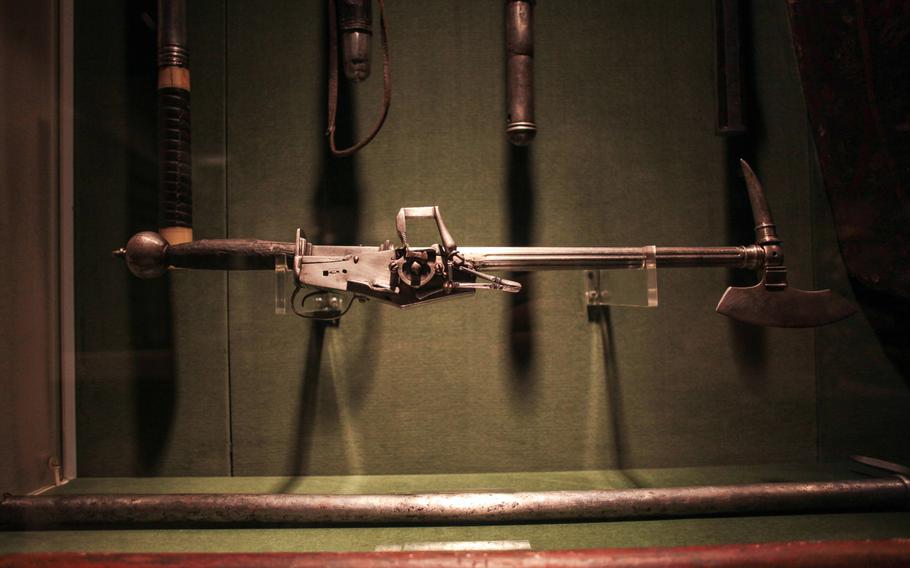 Buy Photo
One of the stranger weapons on display at Germany's Burg Elz is this hybrid wheellock pistol (later converted to a flintlock) with a battle-ax from the 1500s. (Matt Millham/Stars and Stripes) 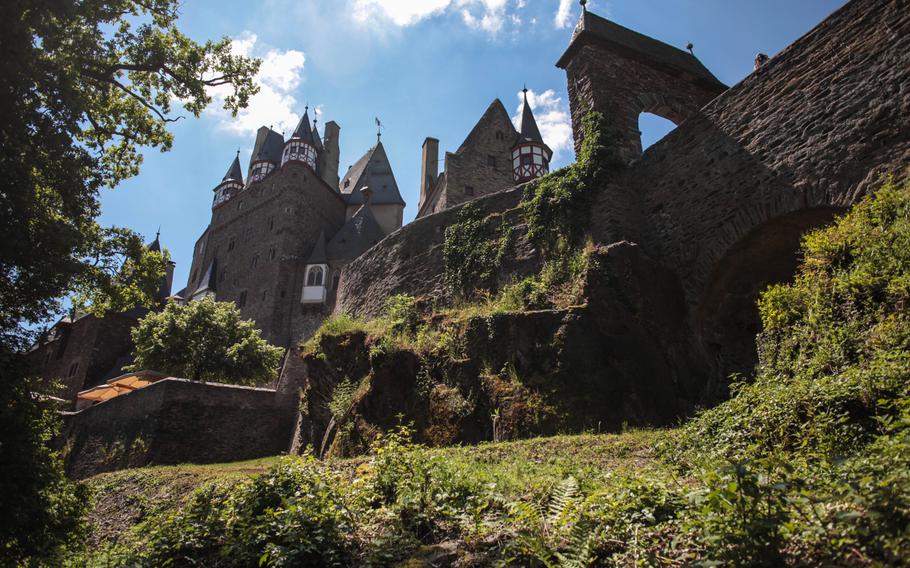 Buy Photo
Those who hike to Burg Eltz from one of the surrounding villages in Germany's Rhineland get a sense of what it must have been like for medieval merchants to approach the imposing structure. (Matt Millham/Stars and Stripes)

Germany is a land of medieval castles, but few evoke the aura of fairy-tale fantasy that Disney has dished up to Americans for decades.

That’s because the Middle Ages, when ramparts and stone towers adorned every nobleman’s home, were pretty grim times. Skull bashing and swordplay were as common then as soccer games are today, so the rich and privileged had to build their houses as fortresses to protect them and all their stuff.

Although they were formidable structures, no castle was invincible. Recreational plundering, a favorite pastime of Europeans until the invention of the cigarette, meant many of Germany’s finest fortresses had been pillaged by the Age of Enlightenment.

But not the Rhineland castle Burg Eltz.

The Eltz family established its stronghold around the 12th century — or maybe earlier; the history’s a bit fuzzy — building their keep atop a massive rock jutting from the floor of a deep, pastoral valley carved by the Elzbach River. It is from this burbling tributary of the picturesque Mosel that the family took its name.

Centuries after laying the first stone, Eltz family descendants finished the masterpiece in 1615, an eight-tower citadel with more than 100 rooms in a location that remains remote today. That might explain its relative obscurity compared to Germany’s famous Neuschwanstein Castle, a late-19th-century “newcomer” that was the inspiration for Disney’s iconic trademark palace. At least seven centuries older, the Eltz castle is nearly as exquisite and perhaps more interesting.

The reason Eltz stood while so many others fell, according to local tour guides, isn’t because it was so far off the plunder trail that nobody cared to attack it, but because the Eltzes were fantastic politicians.

As remote as it seems now, the Elzbach River was, in its day, similar to a well-traveled horse-and-wagon toll road. From its perch above the Elzbach, the Eltz family protected and controlled all traffic and trade between the fertile lands of the Maifeld plateau and the Mosel.

It was a profitable business, and early in the 14th century Archbishop Baldwin of Luxembourg tried to bring the Eltz lands under his control during a failed campaign to consolidate his influence across the region. While many nobles ceded to Baldwin’s desires, the Eltz family’s web of alliances helped them evade his control. Baldwin’s stone siege tower, within arrow shot of Eltz, is now a weed-infested ruin.

Eltz is one of just a handful of Rhineland castles that was never destroyed. Although the Eltz family split into three main branches in the middle of the 13th century, descendants continued to occupy the castle until 1815.

Since then, the Kempenich family branch has had sole ownership of the castle.

They retain part of the castle for private use, but the rest, including the grounds, the inner courtyard, the treasury, and the Ruebenach and Rodendorf homes, is open to the public, some of it for a fee.

The homes retain much of their centuries-old decor, but with a few later additions to recast the Middle Ages as a period of romanticism during the reign of Otto von Bismarck, according to castle tour guides.

In the 1800s, ancient suits of armor and broadswords were brought out from armories and displayed as home furnishings, and are still there to give tourists a sense of the times.

The tour through the castle’s old houses, completed in the late 1400s, also gives a fascinating glimpse into what life was like for the super rich of 500 years ago.

Even if they didn’t have the trappings of familiar fairy tales with stagecoaches conjured from pumpkins à la Cinderella, they did have plenty of gold, a splendid castle and all the fancy weapons they needed to defend it.

Directions From Kaiserslautern or Wiesbaden, Burg Eltz is off Autobahn 61, southwest of Koblenz near the Mosel River. From autobahn A61, take exit 40-Koblenz/Waldesch toward Alken/Mosel/Pfaffenheck and merge onto highway B327. Turn right onto highway L207, then left onto the B49 at the bottom of the hill. A few hundred yards later, turn left onto the K 41 and cross the Mosel, then turn right onto the B416 and follow the signs to Burg Eltz, about six miles and five more turns down the road.

You can also hike or bike to the castle from various nearby towns.

Costs Parking is 2 euros for cars and motorcycles. An optional shuttle from the parking area to the castle, about a 10-minute walk away, is another 2 euros per person. Entrance fees for the guided tour (the only way to see the castle’s living areas) are 9 euros for adults and 6.50 euros for students, and includes a self-guided tour through the castle’s treasury and armory. Family tickets for two adults and two children cost 26 euros.

Food The castle has two restaurants just outside its inner wall. Get a quick bite, such as a wurst or bowl of goulash soup, at one; the other has a fuller menu for those who want to take their time.