Rhine: Biking is fine between Koblenz and Bingen A detour sign prevents cars from driving on the B42 between Lahnstein and Rüdesheim, Germany, during a car-free day. (Robin Hoecker / S&S)

A detour sign prevents cars from driving on the B42 between Lahnstein and Rüdesheim, Germany, during a car-free day. (Robin Hoecker / S&S) 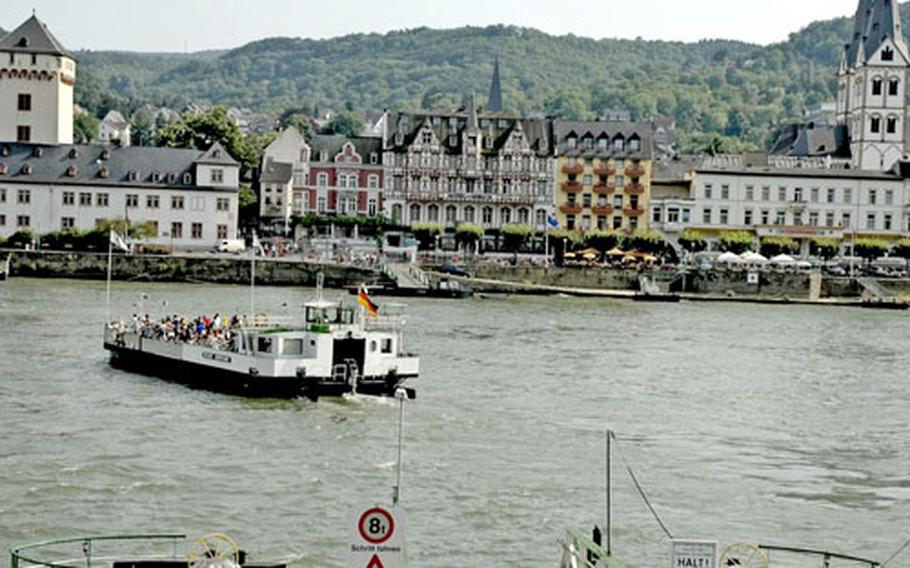 Bikers participating in a car-free day in June take a ferry across the Rhine in Boppard, Germany. The day allowed bikers to ride easily along the east side of the Rhine. (Robin Hoecker / S&S) 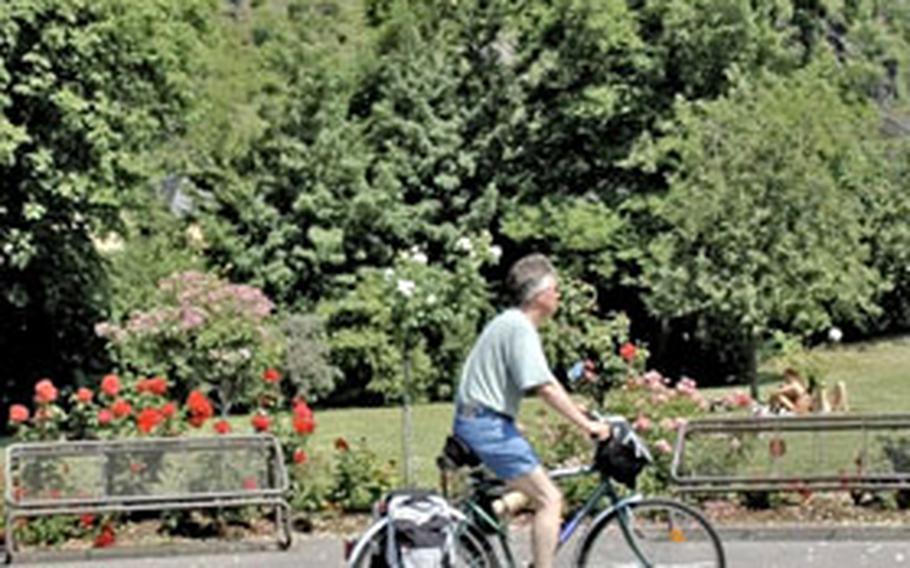 A biker makes his way along the bike path in Braubach, home to the Marksburg, one of many castles along the Rhine valley. (Robin Hoecker / S&S) Bikers enjoying a car-free day ride down the east side of the Rhine River near Braubach, Germany. The region is known for its wine, which is sold at stands along the route. (Robin Hoecker / S&S) Wine from the surrounding vineyards is available at roadside stands like this one just north of St. Goarshausen, Germany. Water, however, can be hard to come by, so bring your own. (Robin Hoecker / S&S)

Once upon a time, a curly haired girl from Pittsburgh wanted to visit the castles of the Rhine. At first, she set out on foot, but soon had blisters and only saw a single castle. This won&rsquo;t work, she thought, and tried again with a car. But she only saw the brake lights of the traffic in front of her, and spent too much time searching for parking.

Finally, a wise, gray-haired man &mdash; her editor &mdash; suggested she take a bike. As she pedaled down the smoothly paved path, hopping from castle to castle, she knew this mode of transportation was just right.

To ride a bike along the Rhine is like falling through a deep hole into a book of fairy tales. The 65-kilometer (40-mile) stretch between Koblenz and Bingen has a particularly rich history that is easily accessible on two wheels. With each passing village and castle comes another dramatic story of romance, crime, mystery and death.

The tour begins in Koblenz, where the Rhine and Mosel rivers meet. A railroad town with bridges and steep hills that fall into the rivers, Koblenz made this Pittsburgher&rsquo;s heart go pitter-pat. The city&rsquo;s history is one of conquest and occupation, evidenced by the Napoleonic relics, statues and an 11th century fortress, Festung Ehrenbreitstein, which stands guard over the city.

From Koblenz, roll south about five kilometers along the flat and well-paved path to the Stolzenfels castle, which was used in the 13th century to collect illegal tolls along the river. The golden castle, rebuilt by the Prussians, features terraces, gardens, chandeliers and antique furniture that transport a visitor back in time, to the Romantic era of the 19th century.

Although the crowds are slightly thicker, the west bank of the Rhine makes for an easier ride. The east side path sometimes disappears, forcing bikers to ride on the road.

No matter which side of the river, patches of hillside vineyards provide a stunning backdrop for bikers winding through the valley.

The vineyards double as a source of nourishment. Although water may sometimes be hard to come by, a good and inexpensive bottle of wine can be found just about anywhere. On weekends and holidays, wine stands and cafes are full of bikers who stop to sample the local varieties.

Just don&rsquo;t drink too much, or it may cloud your ability to tell legend from reality.

Perhaps that is what happened to the ship captains who, over hundreds of years, have crashed so many barges at the Lorelei cliffs, the hairpin curve in the Rhine. Rather than blame the weather, poor visibility or swift current of the water, the sailors claimed they had been misguided by a group of singing maidens.

For the strong-legged riders who make it all the way down to R&uuml;desheim, just across from Bingen, don&rsquo;t miss the Middle Ages Torture Museum (7 euros; 5 euros for children or students). The collection includes an interrogation chair covered with nails; head presses; chastity belts, and an executioner&rsquo;s ax. Not leaving too much to the imagination, some of the devices&rsquo; functions are demonstrated with mannequins.

The torture museum may be a perfect way to end the trip. Looking at the wide array of pain-inducing inventions makes sitting for hours on a sliver of a bicycle seat seem like a Swedish massage.

For those who don&rsquo;t make it all the way to their destination, for reasons of weather or exhaustion, no worries. Trains and boats travel frequently up and down the river and can tote you safely home and back to the real world.

If you intend to bike the Rhine:

Bring at least one big bottle of water. In a country without water fountains, H20 can be hard to come by. Kiosks carry it, but it can cost up to 2 euros for a small bottle, which probably won&rsquo;t be enough to quench your thirst.Wear sunglasses, not only to protect your eyes from the glare of the Rhine, but also to deflect bugs. In a place with such beautiful scenery, it would be a shame to have your eyes swell up and fog your vision.Wear sunscreen. Since you&rsquo;ll be in the &ldquo;saddle&rdquo; for hours, your skin will be on fire in the morning; don&rsquo;t torture yourself.&mdash; By Robin Hoecker