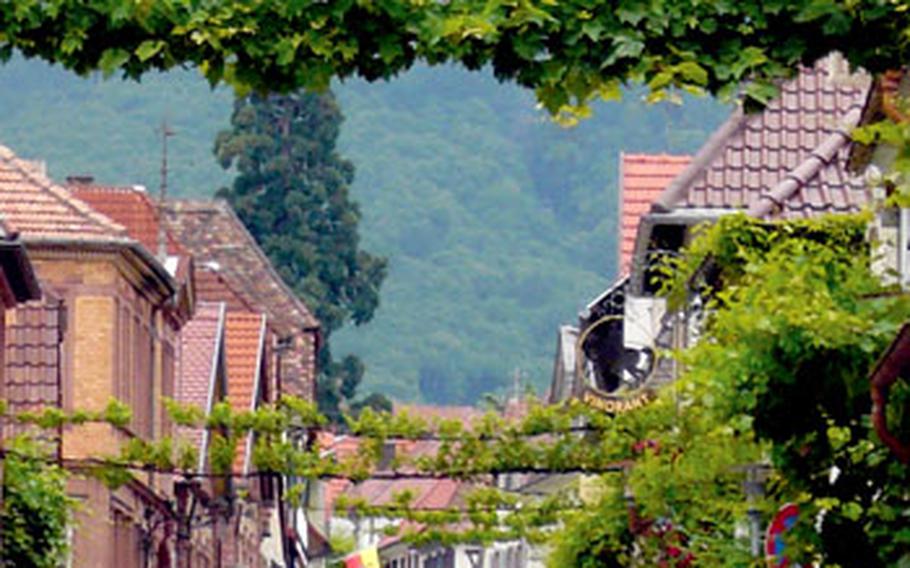 A cyclist travels down Theresienstrasse in Rhodt unter Rietburg, one of the many villages along the southern German Wine Road&#39;s bike path. (Scott Schonauer / S&S)

Want to enjoy the famed German Wine Road, but can&rsquo;t find a designated driver? No worries.

You can hit the road and taste some of the finest white wine in the world without having to get behind the wheel of a car. Take your bicycle on the train to the Deutsche Weinstrasse, then ride from winery to winery. You don&rsquo;t have to fret about driving. Plus, you save on gas.

The southern Rheinland-Pfalz has made it easy for cyclists, no matter what their degree of experience, to enjoy the beautiful vineyards and idyllic hamlets that line the route. The German Wine Road Cycle Trail slices through acres of sun-drenched vineyards and villages that boast great places to dine in addition to spots to try their fine wine.

There are eight cycle paths in the Southern Wine Route and many more north of Neustadt an der Weinstrasse. The entire route is 85 kilometers and ends at the border of France. Most of the paths are paved with asphalt or concrete and wind alongside the German Wine Road through fields of grapes and by the edge of the Palatinate Forest.

I took the train from Landstuhl to Edenkoben, a village along the route wedged halfway between Landau and Neustadt. Most trains and many bus routes allow travelers to take their bikes, making the trip easy.

You don&rsquo;t have to drink wine to enjoy the wine road. But it is a must for wine lovers. The Palatinate is one of the largest wine-growing regions in the country, producing world-renowned Riesling and M&uuml;ller-Thurgau wines.

Geography is what makes this part of Germany so good for winemakers. Grapes grow best on slopes, and the wine route is full of rolling hills. Another important ingredient is the weather. The area is the sunniest and warmest region in Germany, with an average of 1,800 hours of sunshine annually, giving it the unofficial moniker of the German Tuscany.

There&rsquo;s no better way to enjoy the weather and countryside than by bike. Visitors miss too much by car and see too little by foot.

Edenkoben, which has the biggest wooden barrel cellar in the region, is worth an extended stay. But I cycled on to the next village, Rhodt unter Rietburg, for coffee and pastry to prepare for an afternoon of biking and wine parlors.

Rhodt traces its history to Roman times. Eighty percent of the main village is classified a historical monument and is ardently protected from any building changes. It also is the official tourist center for the Southern Wine Road and has a tourist office in the middle of the main part of town.

The next part of the bike path travels through small villages such as Burrweiler, Gleisweiler and Frankweiler, where many of the narrow streets are covered with grape vines. I had planned to ride all the way to Schweigen-Rhechtenbach &mdash; the beginning or end of the German Wine Road, depending on your starting point &mdash; but after about 25 miles of riding, I knew my legs could not take me to the edge of France&rsquo;s Alsace region.

The rolling hills of vineyards and quaint towns that had captured my interest early in the ride were blotted out by aching muscles. I was painfully sore and thirsty.

Luckily, there were plenty of places where I could address both.

If you go ...Directions: The German Wine Road, or Deutsche Weinstrasse, runs from Bockenheim in the north down south to Schweigen-Rechtenbach. You can take the train to some of the larger towns along the road, or you can drive down and park in any of the villages. It cost 8 euros to take the train from Landstuhl to Edenkoben, which is between Landau and Neustadt an der Weinstrasse.

Times: Wine bars and spots where you can taste and buy wine have varying opening times. Most open at about 11 a.m. and close at 2 p.m. before reopening at about 4 p.m. or later in the afternoon and remaining open into the evening.

Costs: There is no charge to use the bike path.

Food: There are plenty of restaurants, snack bars, cafes and guest houses along the way to buy a quick bite or a full meal to accompany the wines.

Information: It is highly recommended that bikers buy a map. The path is well marked, but there are several routes to choose from. The state of Rheinland-Pfalz Web site, www.pfalz-radtouren.de, includes tons of information on bike routes in the area, including the German Wine Road. The site is in German. Another Web site, www.pfalzwein.de/en, offers information on the area&rsquo;s wine and other trip suggestions; it has an English version.