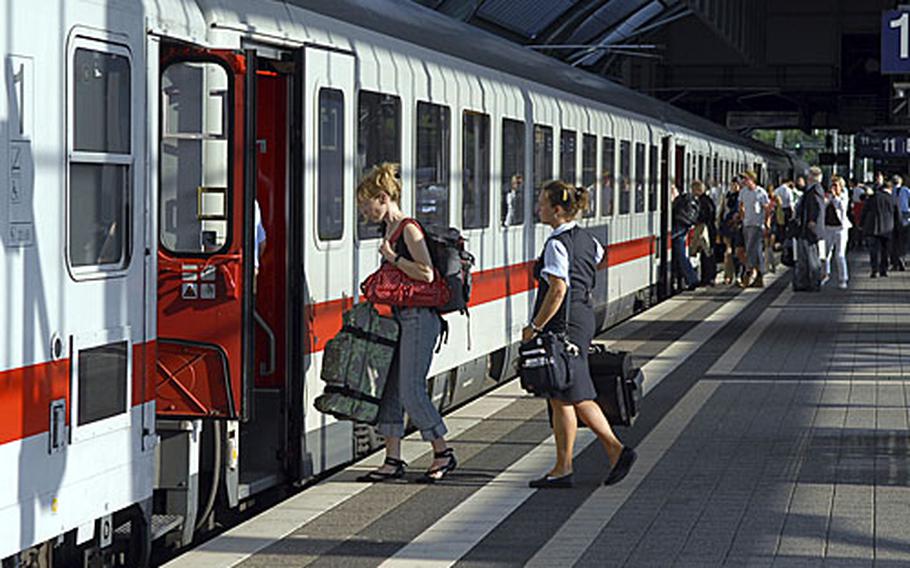 Going by train is a great way to see Germany and the rest of Europe -- and somebody else does the driving. National railways offer special deals to make riding the rails more affordable. (Michael Abrams / S&S)

Going by train is a great way to see Germany and the rest of Europe -- and somebody else does the driving. National railways offer special deals to make riding the rails more affordable. (Michael Abrams / S&S) 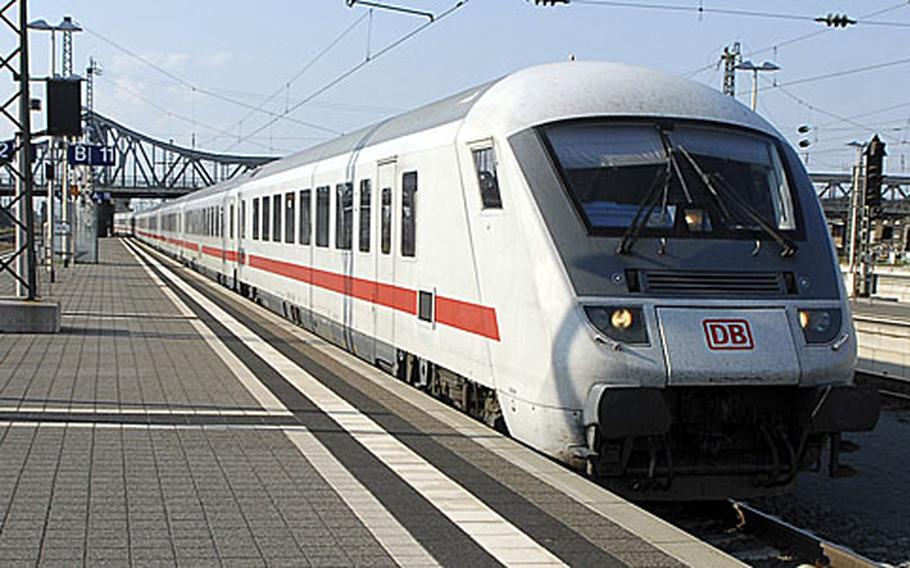 The Inter City trains and their faster brother, the Intercity Express, are a quick way to travel, but the speed does cost a premium. (Michael Abrams / S&S)

With all those budget airlines out there, does anybody really take the train these days, other than for short hops?

Just try riding the rails in the direction of a city hosting a soccer match on a Saturday afternoon and you&rsquo;ll have your answer: A big yes.

But if you just waltz into any German train station and expect to find reasonable fares for a train leaving within the hour, you are apt to be sorely disappointed. Like most things in life, forethought and planning make all the difference.

So how do you get the most out of the Deutsche Bahn&rsquo;s offerings? The best way is to familiarize yourself with the many products it offers outside of the standard rail ticket. Here&rsquo;s an overview of several of the deals offered on a regular basis.

&bull; Weekend ticket: From a price standpoint, Saturdays and Sundays are good days for rail travel in Germany, because you can take advantage of a tariff known as the Sch&ouml;nes- Wochenende-Ticket, or &ldquo;Happy Weekend Ticket.&rdquo; This is basically a pass that allows up to five people to travel on S-Bahn, Regionalbahn, Interregio-Express or Regional-Express networks at a cost as low as 33 euros per day. The ticket is cheapest if bought on the Internet or from the automated machine; it costs 35 euros when purchased from the ticket desk, and 36 euros if purchased on board.

For an extra 4.50 euros, you can take along a bike. Dogs, no matter the breed, can&rsquo;t travel on this ticket. Information in English can be found here.

&bull; Surf and ride: Every Saturday at 10 a.m., a couple of dozen routes between city pairs within Germany are released for purchase at a cost of 39 or 59 euros round trip. The routes usually are between bigger cities, but if you can get to one of the starting points at minimal cost, you can save a bundle overall. Leave as early as the following Sunday, and return no later than two weeks after the offer was released.

To take advantage of these rates, you&rsquo;ll need to book and purchase online, as these tickets are not sold at the counters of railway stations. You also need to be quick and decisive, as the most convenient dates and times &mdash; weekends &mdash; sell out in a flash.

&bull; L&auml;nder-Tickets: If you anticipate that your travels will keep you within the boundaries of one particular Bundesland, or federal state, this type of rail pass represents an exceptional value. These tickets are valid for one-day travel in second-class compartments for up to five people traveling together or for parents traveling with any number of their children or grandchildren under ages 15.

Some, but not all, of these L&auml;nder-Tickets are valid on Saturdays and Sundays. Hours of validity are generally 9 a.m. until 3 a.m. the following day, and they can be used on local train networks including S-Bahn, RB, IRE and RE.

Conditions vary slightly from state to state, so be sure to check out the particulars before booking. For a good overview in English, click here.

&bull; Early booking: If none of the above deals looks like it will meet your needs, see if you can save under two discount fare structures known as Sparpreis 25 or 50. As the names imply, the programs offer 25 percent or 50 percent discounts on full fare prices. Passengers must restrict themselves to a particular day and train, and the round-trip journey must start and end at the same station.

Sparpreis 25 must be purchased at least three days in advance, and for Sparpreis 50, weekend restrictions apply. Both fares are sold in limited quantities and subject to availability, so even if your booking meets the requirements above, you might not be successful.

&bull; Regular passes: If you&rsquo;re frustrated with only sporadic success in buying the discounted tickets and you travel a lot by train, you could consider buying a Bahn card, which allows you to get a 25 percent or 50 percent discount off virtually any ticket you purchase. But how much travel would you have to do to make these passes worthwhile?

According to the Deutsche Bahn Web site, the Bahncard 25 would be worth purchasing if you spend more than 200 euros per year on rail travel, and notes that this amount could be reached by simply buying the equivalent of a return ticket between Hamburg and Munich. The BahnCard 25 costs 51.50 euros for a pass valid on travel in second class and 103.00 euros for first.

The BahnCard 50 is much more expensive, coming in at 206 euros for second-class travel, but for frequent rail travelers, it could pay for itself rather quickly. Note, however, that the BahnCard 50 cannot be used with most other types of discounted fares.

Are you really, totally train- travel mad? Then consider buying a BahnCard 100, which, at a cost of 3,300 euros for second class, allows you to travel for free on all DB trains for 12 months from the date of issue.

And send us a post card when you get there.

Here are Web sites for selected national railways in Europe to help you get started on your travels.