Quick Trips: Want to monkey around? Try the Alsace 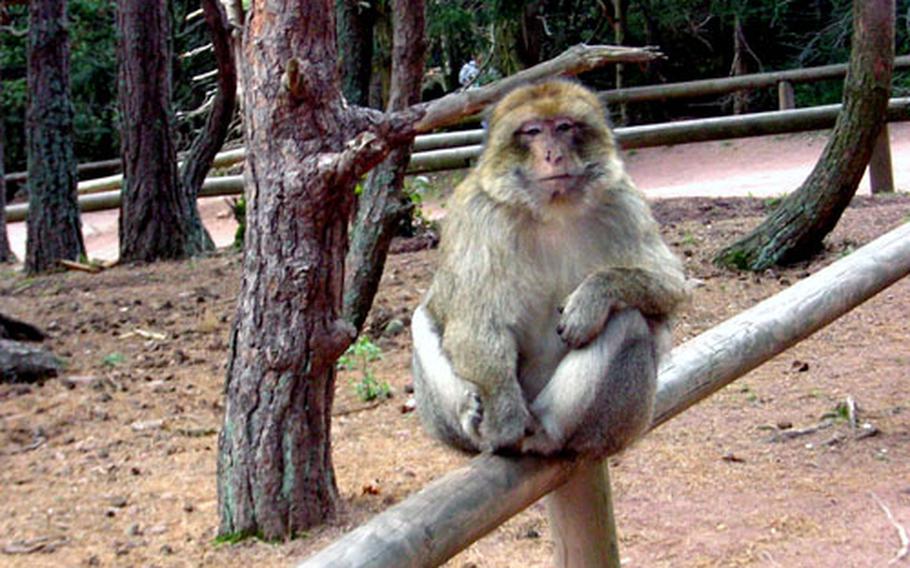 Both visitors and inhabitants of La Montagne des Singes — Monkey Mountain — are free to roam part of the grounds of the reserve and interact. This monkey, one of 280 at the reserve, greets visitors near the entrance, hoping for a handout. (John Taylor / S&S)

Both visitors and inhabitants of La Montagne des Singes — Monkey Mountain — are free to roam part of the grounds of the reserve and interact. This monkey, one of 280 at the reserve, greets visitors near the entrance, hoping for a handout. (John Taylor / S&S) The restored Haut-Koenigsbourg fortress is built into a rocky spur overlooking the Alsatian vineyards. This view is from the north tower of the great keep, looking toward the main entrance of the fortress. (John Taylor / S&S) 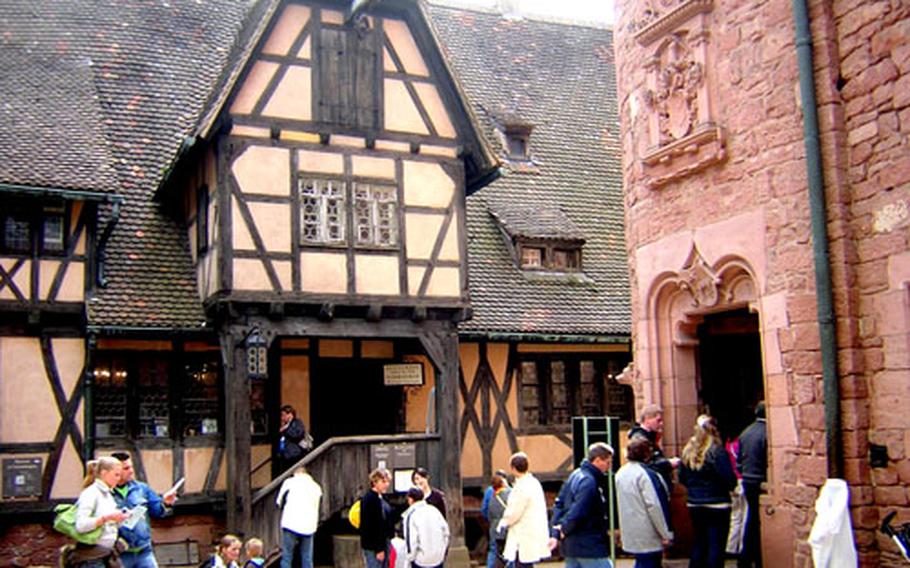 Haut-Koenigsbourg has been restored, giving a good idea of what it looked like in the 15th century. The half-timbered building now houses a restaurant and small gift shop. (John Taylor / S&S) 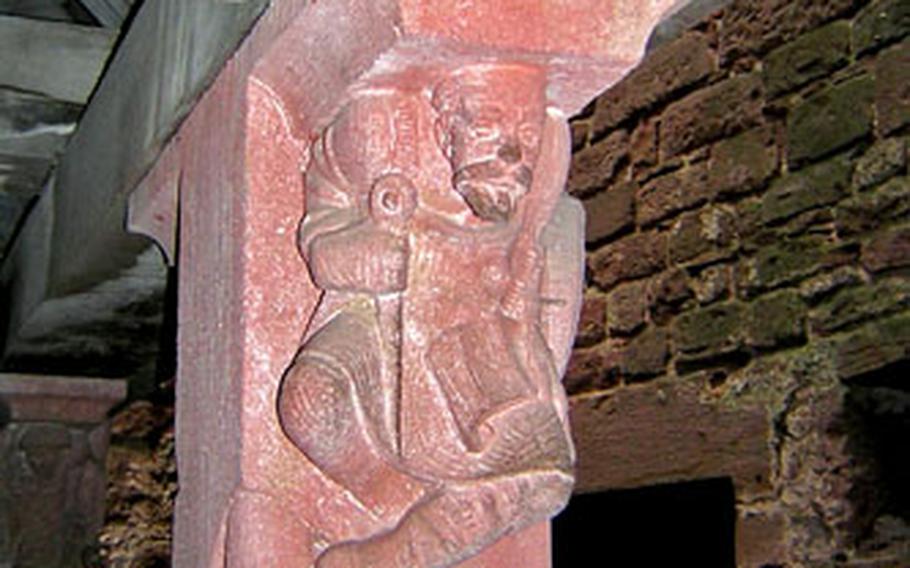 Much of the research and design for the restoration of Haut-Koenigsbourg was by architect Bodo Ebhardt. A carving of Ebhardt is show on one of the pillars that supported a cover for a well inside the fortress. (John Taylor / S&S) 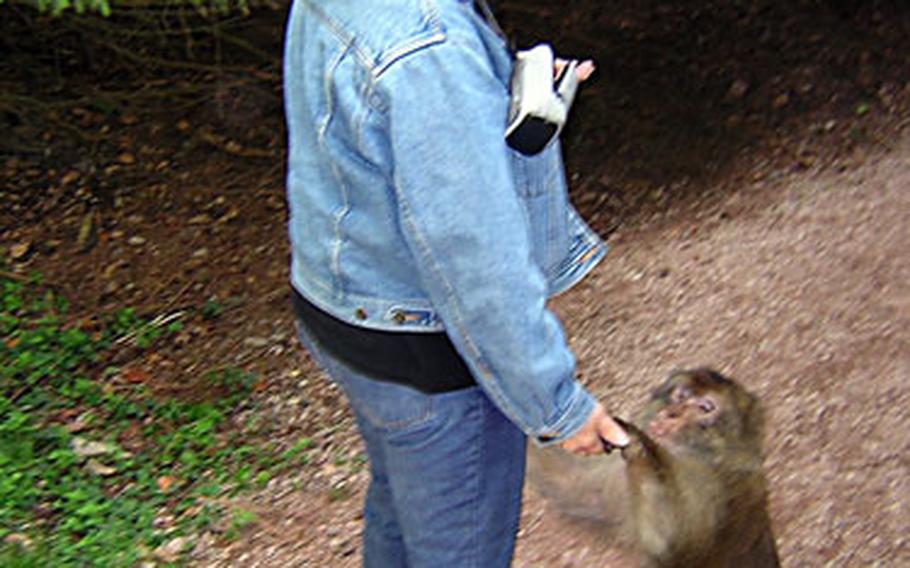 This monkey, shown stopping a visitor for a handout, was shortly chased off the path and into the woods by one of the keepers. The staff keeps an eye on both the monkeys and visitors to make sure all behave. (John Taylor / S&S)

Haut-Koenigsbourg is not your typical 15th-century castle.

The sprawling structure on a promontory overlooking the vineyards and wine towns of the Alsace in eastern France has been rebuilt and restored inside and out to make it look much as it did 500 years ago.

The result is an imposing fortress with several levels, small rooms, lots of steps and displays explaining how the renovation was done.

The castle, first mentioned in the 12th century, came under control of the Tiersteins, a local family allied with the powerful Habsburg dynasty, in 1479. It was reinforced, added artillery and assigned the task of defending the region.

During the Thirty Years War, which began as a civil war between German Catholics and Protestants but eventually involved most of Europe, it withstood attacks while the land below was conquered. Eventually, however, it fell to Swedish invaders, was looted, burned and then abandoned for 2&frac12; centuries.

But it was not destroyed. In 1865, Kaiser Wilhelm II of Germany &mdash; the Alsace passed between German and French rule several times &mdash; ordered the fortress restored. Work continued until 1918, one year before the completed project was ceded to the French at the end of World War I.

The most impressive parts of the fortress are the exterior, with the thick walls and ramparts cut into and built atop the 2,500-foot-high mountain, and the winding passageways and stairways that go up and down several levels. The rooms are less so: Most furnishings are either copies or from a later time.

Don&rsquo;t forget to stop and look out windows and through the artillery openings to the land below. One glance will explain why the fortress was built where it was.

Near the end of the self-guided tour is an exhibit showing how the work was done, including before and after shots of various spots around the fortress.

Visitors can tour on their own, relying on placards in German, French and English; rent headphones for an audio tour in several languages; or go on a guided tour (English tours are available).

The self-guided tour takes about an hour, and if you want to make a day of it, go part way down the road leading back to the town of Kintzheim to La Montagne de Singes &mdash; or Monkey Mountain.

The park was established in 1969 to study and breed Barbary macaques. Today there are more than 280 of them roaming an area of about 60 acres.

But this is no typical research center or zoo. In a small section of the park, there is a marked walkway where visitors can come face to face with the monkeys and feed them popcorn.

Guides walk the grounds, answering questions in several languages (including English, usually) while keeping an eye on both visitors and inhabitants. There are question-and-answer signposts along the way giving basic information about the monkeys and monkey families &mdash; including one stating, to my relief, that the monkeys spend only a small portion of their time taking popcorn from visitors.

Apparently they prefer the food they can forage and the fruit the keepers provide.

On the QTDIRECTIONS: From Autobahn 5 in Germany, take the exit for Strausbourg S&uuml;d and follow the two-lane road west across the Rhine River and into France, where it becomes N353. Continue until it intersects with N83, and take that south to the Kintzheim exit. Follow signs for Haut-Koenigsbourg through a couple of traffic circles for about six miles. You will pass the entrance to Monkey Mountain on the way to the fortress. Parking is available at both.

FOOD: Both places have snack bars. In addition, Haut-Koenigsbourg has a small restaurant.