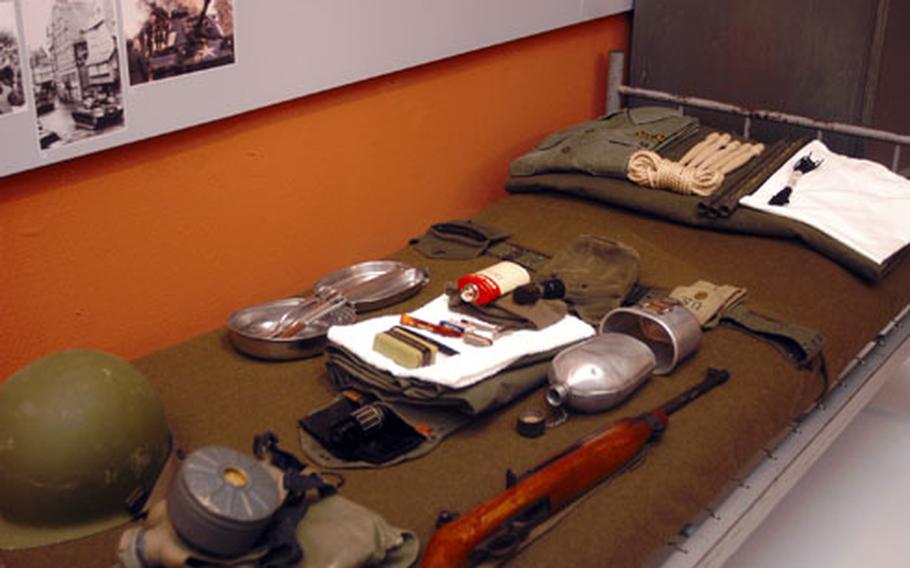 During the Cold War, many U.S. soldiers in the German state of Hessen, particularly in the east, were subject to field inspections most Saturdays. Soldiers were expected to mobilize at a minutes’s notice — 10 minutes, actually — to fight Soviet and East German forces, and this drill was intended to emphasize the need to be stocked and ready to go. These deployment items, from tooth powder to tent stakes, are part of a traveling exhibit called "Americans in Hessen," now on display at Schloss Philippsruhe in Hanau-Kesselstadt. (Photos by Kevin Dougherty/S&S)

During the Cold War, many U.S. soldiers in the German state of Hessen, particularly in the east, were subject to field inspections most Saturdays. Soldiers were expected to mobilize at a minutes’s notice — 10 minutes, actually — to fight Soviet and East German forces, and this drill was intended to emphasize the need to be stocked and ready to go. These deployment items, from tooth powder to tent stakes, are part of a traveling exhibit called "Americans in Hessen," now on display at Schloss Philippsruhe in Hanau-Kesselstadt. (Photos by Kevin Dougherty/S&S) Visitors to an exhibit covering the U.S. military presence in the German state of Hessen pass through a series of stations, including one that mentions the German peace movement. The movement began in the late 1960s and continued, as this banner to peace indicates, through the Gulf War in 1991. This hand-painted sign hung from a building in downtown Fulda, which not long afterward saw U.S. soldiers depart for good. ()

In places such as Hanau and Friedberg, it may seem awfully soon for an exhibit looking back at the U.S. military, which just recently went on permanent leave from both cities. But interest in America&#8217;s influence in this region of Germany runs deep.

"U.S. forces were not stationed in Hessen to play golf," said historian Torsten Halsey, who helped assemble the exhibit.

No, they were not. Wars of the hot and cold variety drew and kept them in the German state, and in the process turned an old foe into a fast friend.

For the next year or so, a 1,000-piece exhibit will be on display in at least three cities. Titled "Americans in Hessen," the exhibit chronicles six decades of life in the state where upward of 120,000 U.S. troops were once stationed.

The collection debuted a few weeks ago in Hanau and is currently on display in the city&#8217;s historical museum in the Schloss Philippsruhe, an 18th-century castle on the banks of the Main River.

"We take the whole span of Americans living side by side with the Hessen, and it&#8217;s not only the military," Halsey said. "We&#8217;re trying to give an objective view over the last 63 years."

The exhibit will remain in Hanau through March. In April, it moves to Ray Barracks, the former U.S. Army facility in Friedberg. Around August, it shifts to Wiesbaden. The Army left Friedberg last year and Hanau this year. Aside from a few sites in Darmstadt, which effectively closed this year, Wiesbaden is the only U.S. military community remaining in Hessen.

In Hanau, the exhibit is divided into several sections and organized mostly chronologically.

The first room, for example, is devoted to World War II and the immediate aftermath, which includes the U.S. occupation force. There is a 12-minute film made by the Army that was required viewing for any soldier headed to Germany. Essentially, it instructed troops not to fraternize in any way with the people, to be respectful but always wary.

In an adjoining room, the theme shifts to the late 1940s and 1950s, when dependents arrived en masse and Soviet and U.S. troops faced off along the border separating East and West Germany. A blueprint of Fulda Elementary School hangs in one corner, while across the way on a soldier&#8217;s bunk is all the gear a guy needed to head to the field.

The collection, which includes items on loan from more than 60 people, encompasses cultural fads, combat plans and iconic products and people. It even includes the mirror, sink and a chair from the base barber shop in Friedberg where Elvis Presley went to get his locks cut.

A couple of rooms later, visitors are brought up to the present &#8212; the wars in Afghanistan and Iraq, the closure of bases and the expansion of the Wiesbaden military community, the future home of the 7th Army.

"The exhibit is very good for Hessen," said Gerhard Strauss, a contributor to the exhibit, "because it gives you good insight."

The "Americans in Hessen" exhibit is in the Schloss Philippsruhe in Hanau-Kesselstadt. From the Frankfurter Kreuz intersection of autobahns 3 and 5, take A3 toward W&#252;rzburg/Munich to the B45 exit. Head north toward Fulda/Hanau/Hainburg for eight kilometers, then look for signs on the west end of Hanau for Kesselstadt and Schloss Philippsruhe. The castle/museum is on the Main River.

The exhibit is open 11 a.m. to 6 p.m., Tuesday to Sunday. It will remain in Hanau through March 29 before moving to Friedberg on April 22. In late summer, the exhibition will shift to Wiesbaden.

Entry is 6 euros for adults; 3 euros for children.

Sodas, juice and coffee are available for sale, as well as a few light snacks.

For more details, go to the city of Hanau&#8217;s Web site for the event at: www.hanau.de/kultur/museen/ausstellungen/amerikaner/uebersicht/06454/. It is in German only.