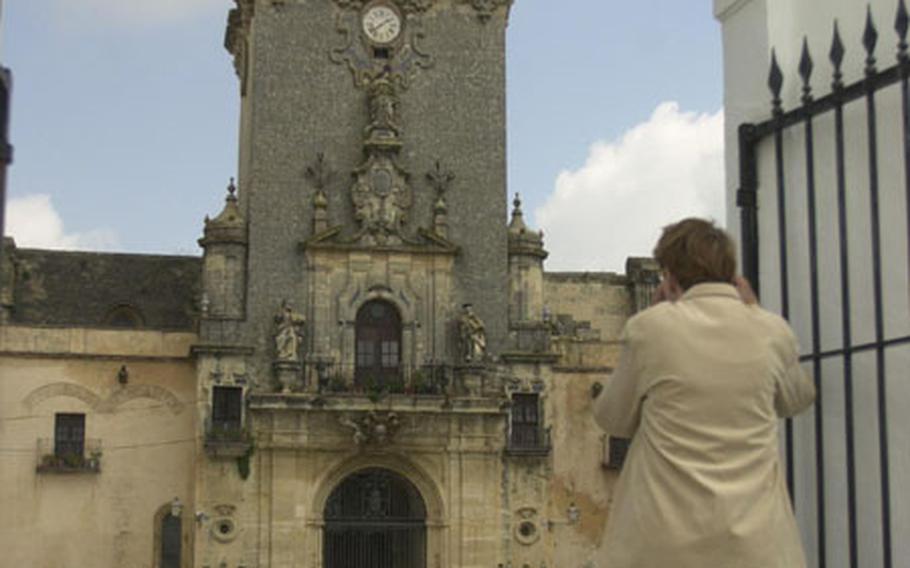 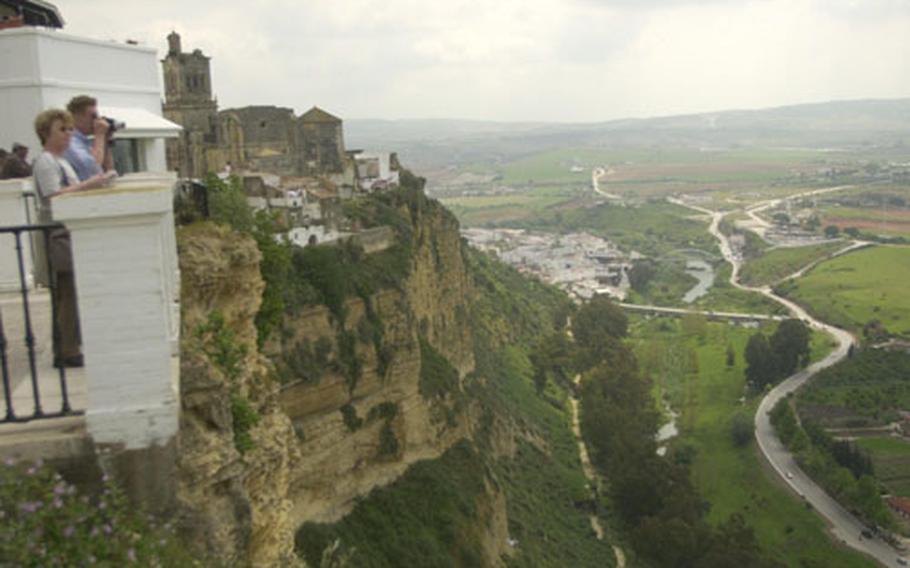 Tourists take in the view from an area perched more than 300 feet above the Guadalete River. (Scott Schonauer / S&S) 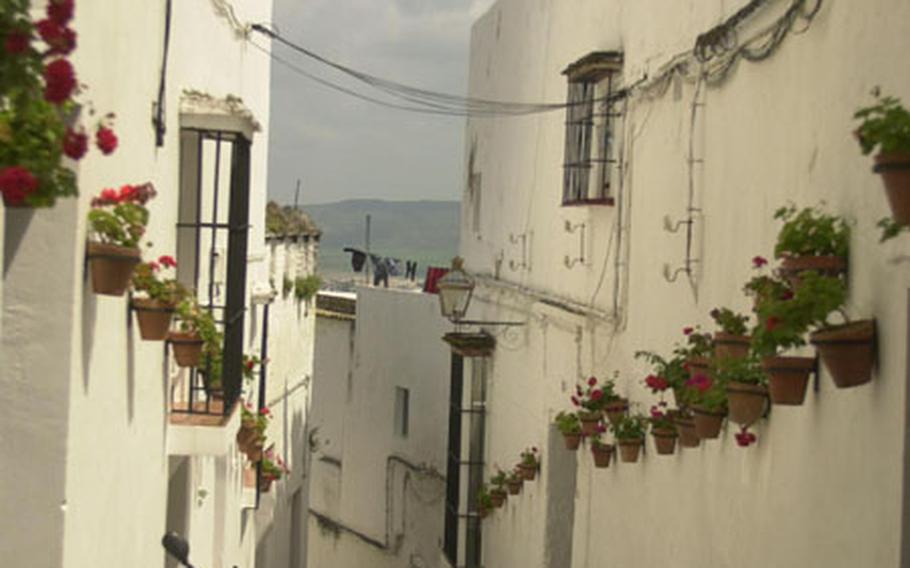 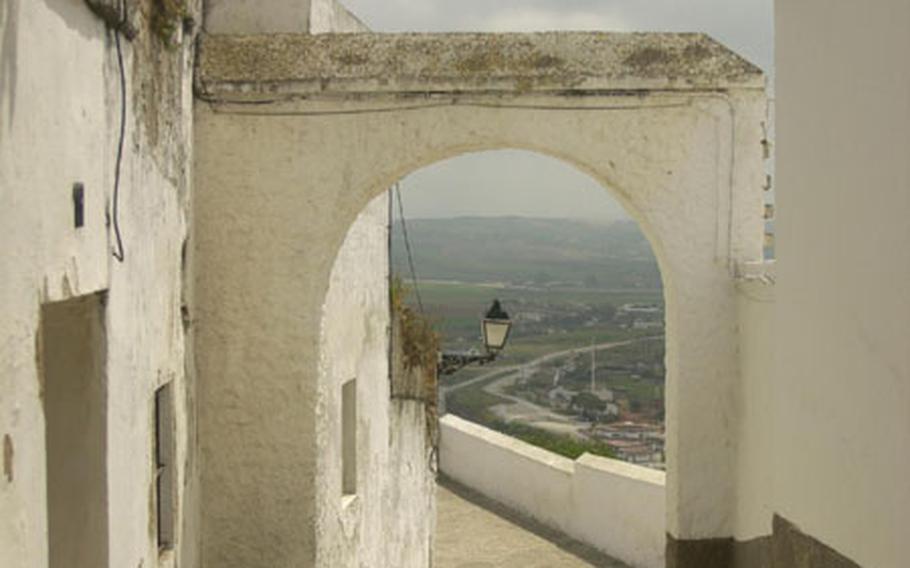 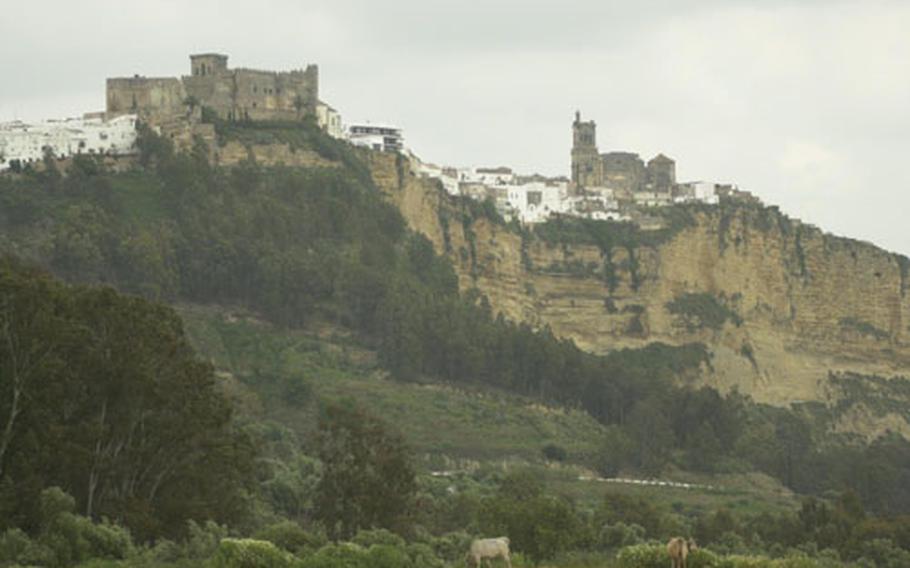 A pair of cows graze with the city of Arcos de la Frontera, Spain, in the background. (Scott Schonauer / S&S)

But few of the postcard-perfect villages have a more impressive skyline than this one. Before entering the city along the main road, the first glimpse of the blinding white homes perched on top of the hill seduces even the most cautious driver to steal one fleeting look.

Guidebooks praise this hilltop city as one of Spain&#8217;s most beautiful little towns, and it is easy to see why. There are great views at nearly every turn in the historic section, and the town offers a peek at Spanish culture unspoiled by cookie-cutter apartments or Burger Kings.

While most people come to Arcos to take in the sights, tour guide Julia Palma said the hospitality of the easygoing residents is what makes the town different than the bigger cities. Each day, some residents open their homes and private patios for tours.

While Arcos has a trio of three-star hotels and several nice bed and breakfasts, visitors can see just about everything in one day.

At around 35 miles from Naval Station Rota, a pilgrimage to Arcos is practically a rite of passage for Americans at the base.

Like other Spanish towns with &#8220;de la Frontera&#8221; in their names, Arcos once stood on the border between Christian Spain and the area under control by the Muslim Moors until the 15th century. The Romans called the settlement Arx-Arcis, meaning &#8220;high fortress.&#8221;

It sits on a cliff wedged between the Guadalete River and a man-made lake.

Its charm is hardly a secret: The city has only 30,000 residents, but more than 85,000 people visited last year, according to tourist office statistics.

Visitors find many of the most interesting monuments and plazas in the Old Town, the highest point. Park your car at the underground public garage at the foot of the older section and hike up to Plaza del Cabildo. It&#8217;s steep, but driving a large car though the maze of streets &#8212; some only 6 feet wide &#8212; can be tricky.

Surrounded by the state- owned Parador hotel, St. Mary&#8217;s Church and the tourist information center, the square once was the site of bullfights, judicial decrees and practicing soldiers. Now, to the dismay of some, it is a parking lot.

Standing on the plaza&#8217;s viewing ledge delivers the most spectacular view in a town that could easily fill up a roll of film.

Lean over the railing, more than 300 feet above the river with the wind in your face, and it offers the brief sensation that you&#8217;re in flight with the birds below.

After taking in the view, venture deeper into the old town and find one of the many small restaurants for tapas &#8212; small helpings of Spanish food.

Palma, who was born and raised in Arcos, dreams of living no place else.

Directions: Arcos de la Frontera is about 35 miles northeast of Naval Station Rota, Spain. It can be reached by following A-382 from Jerez de la Frontera, or an exit off A-4 heading north.

Cost: Some of the monuments and historic sites require a donation. Guided tours of the Old Town and patios cost 5 euros.

Info: For information about festivals and tourist sights, go to www.ayuntamientoarcos.org.