Quick Trips: Magic atop a mountain in Heidelberg A small train chugs through the park, passing Rumplestiltskin&#39;s castle at Märchen Paradies on the Königstuhl in Heidelberg. (Rick Scavetta / S&S)

A small train chugs through the park, passing Rumplestiltskin&#39;s castle at Märchen Paradies on the Königstuhl in Heidelberg. (Rick Scavetta / S&S) Kids peddle the magic dragon around the castle at the Märchen Paradies. (Rick Scavetta / S&S) 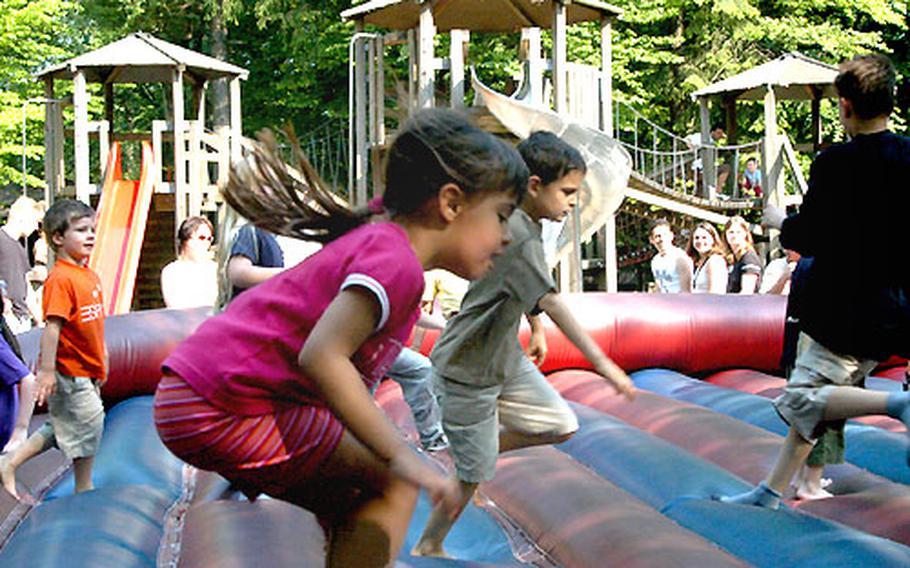 An air-filled trampoline is a free attraction inside the Märchen Paradies, and the kids seem to love bouncing on it. (Rick Scavetta / S&S)

A fairy tale amusement park atop the highest peak in Heidelberg, Germany, is an inexpensive place for families with children to pass a summer afternoon.

The M&#228;rchen Paradies, a family-run park on the forested K&#246;nigstuhl mountain, offers a dozen rides for children.

But there&#8217;s fun for all ages. Many rides have room in one seat for parents and children together.

In 1968, the company running Heidelberg&#8217;s streetcars built the park near the loftiest stop on its funicular railway, which runs from the old city straight up the hillside. The Bergbahn is undergoing renovations this season, so visitors must wind their way up narrow roads by car or bus.

Mouhlen&#8217;s father, Wolfgang, bought the park in 1975 and began building rides. In fact, many current rides, which include a magical witch floating through Lilliput from &#8220;Gulliver&#8217;s Travels,&#8221; were created by the Mouhlen family.

Nearby, a caterpillar train takes passengers through a village of animated characters. Another train takes visitors around the park.

At different sites, children can kick off their shoes and bounce on a large air-filled trampoline, or dig into the sand with a scaled-down version of a backhoe. Mechanical horses trot with passengers along a track through the woods. There is also a course for mini-scooters.

Throughout the park are several smaller attractions based on fairy tales. At Rumplestiltskin&#8217;s castle, animated characters tell the Brothers Grimm tale. At the Pirate&#8217;s Cove, visitors shoot at light-sensitive targets that trigger birds to squawk and sailors to sing.

Over the past few years, the number of visitors has dropped off, due to an economic recession, Mouhlen said. Still, anywhere from 80,000 to 100,000 people visit the park annually. The busiest days are on weekends and German holidays.

Despite its proximity to U.S. bases, American families visit in much fewer numbers than Germans, Mouhlen said. His family works at the park and most of the staff speaks English. But, as Mouhlen said, &#8220;kids play independent of language.&#8221;

Outside the park are circuits of walking trails known as via naturae, the &#8220;way of nature.&#8221; A cafe nearby offers an impressive view of the Rhein-Neckar Valley.

DIRECTIONS: From Autobahn 5, take A-656 into Heidelberg. Use the large communications towers on the hilltop as landmarks, as the park is just below them. Head along the hotel route, pass the main train station, following signs for the castle. At Adenauerplatz, there&#8217;s a large fountain, stay to the right and go through the Gaiberg tunnel. About 300 yards past the tunnel, take a right toward Gaiberg. Follow the signs up the hill to the K&#246;nigstuhl and M&#228;rchen Paradies. A large parking lot is across the street.

FOOD: The park has a kiosk offering sausages, French fries, ice cream and drinks. Nearby, is the K&#246;nigstuhl cafe with an amazing balcony view of the Rhein-Neckar Valley.

MORE INFO: The Web site, in German, is: www.maerchenparadies.de.