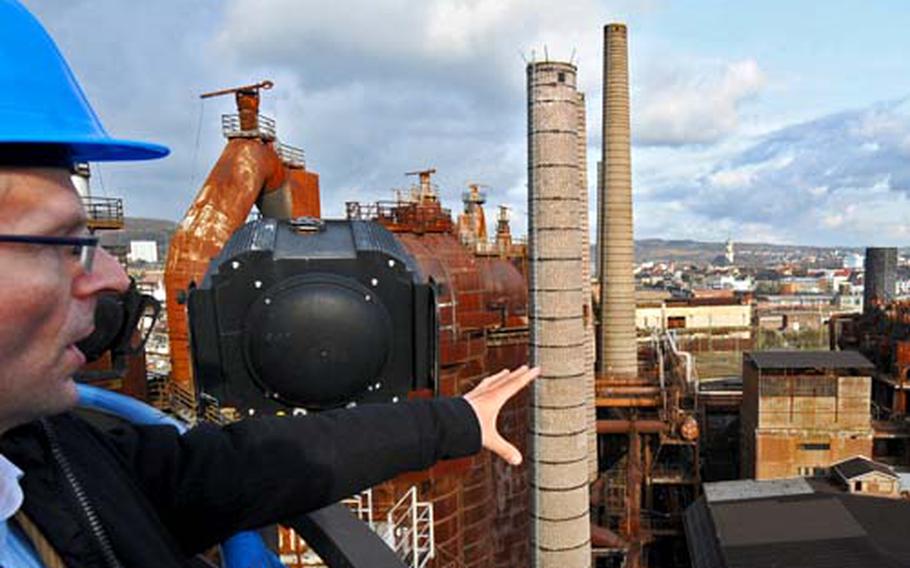 Hanns-Wilhelm Grobe, spokesman for the Völklinger Hütte in a former ironworks center, explains details of the furnace system on top of his workplace. The city of Völklingen, Germany, is in the distance. (Peter Jaeger / S&S)

Hanns-Wilhelm Grobe, spokesman for the Völklinger Hütte in a former ironworks center, explains details of the furnace system on top of his workplace. The city of Völklingen, Germany, is in the distance. (Peter Jaeger / S&S) 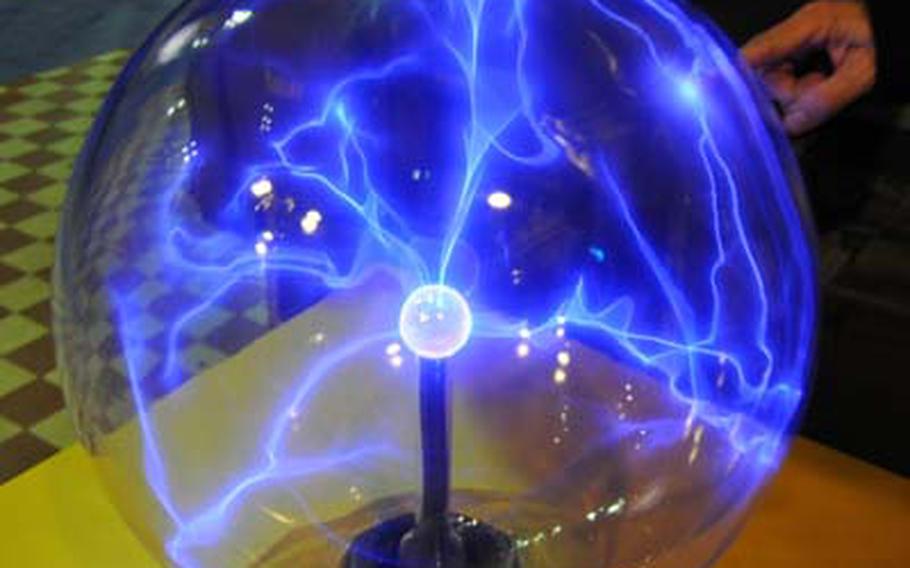 Installations inside the Völklinger Hütte explain scientific phenomena, including how electricity works. By touching the globe, an electrical field is altered, creating a stronger lightning bolt. (Peter Jaeger / S&S) 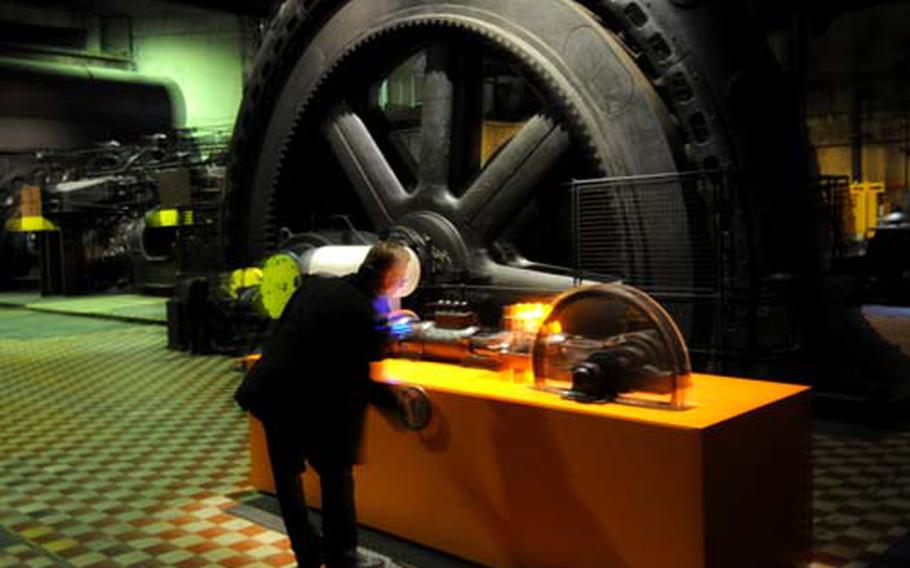 Spokesman Hanns-Wilhelm Grobe Grobe explains with the use of a model the function of this gigantic Otto motor to produce a powerful stream of air to operate the furnace at the former Völklinger Ironworks. (Peter Jaeger / S&S) 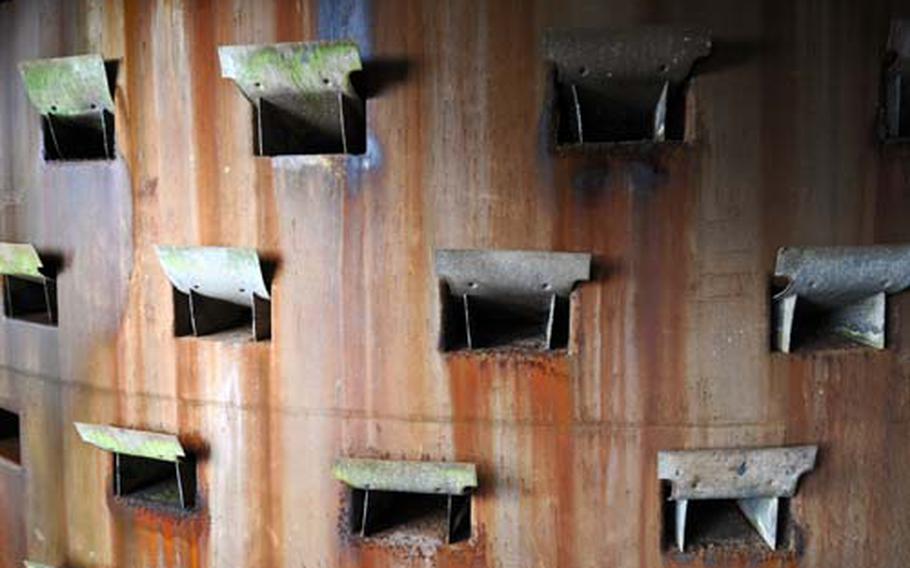 What looks like an original piece of modern art with delicate colors is actually part of the cooling system of a blast furnace at the former Völklinger Ironworks. (Peter Jaeger / S&S) 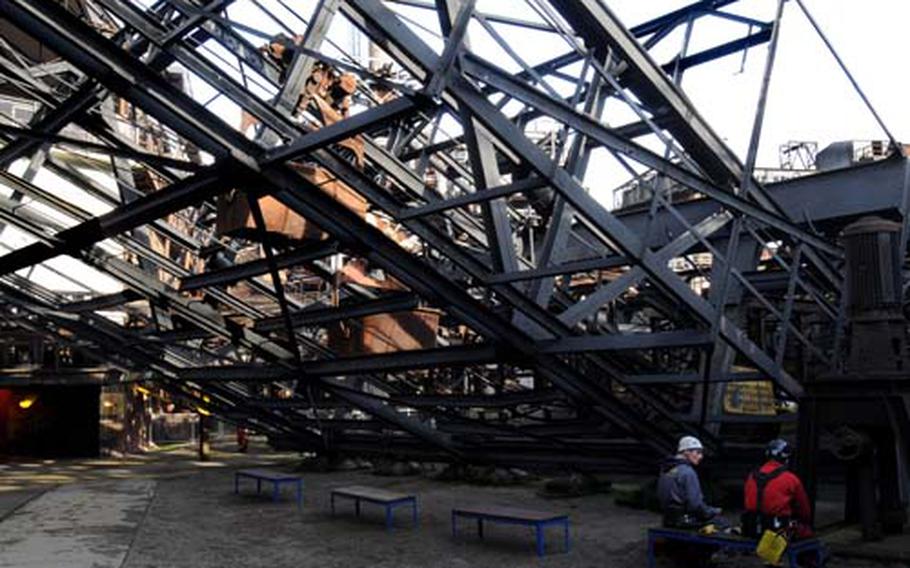 Two preservation workers at the Völklinger Ironworks rest under a giant elevator — two brown cars can be seen through the lattice — that was used to carry raw iron up and into the blast furnace. (Peter Jaeger / S&S)

Tall, dark and rusty, it stands as a monument to the Second Industrial Revolution, which melded with the first in the mid-19th century and resulted in a period of technological and economic progress.

Today, schoolchildren go the ironworks in V&#246;lklingen, Germany, to learn, and the suit-and-tie crowd goes to take in the latest cultural exhibit. The United Nations thought so highly of the site&#8217;s historic and cultural importance that it gave the antiquated plant special status.

"It&#8217;s not Disney World," Hanns-Wilhelm Grobe said as he stood within the bowels of the old factory. But it is a fascinating place.

Situated north of the city of Saarbr&#252;cken along the Saar River, the V&#246;lklinger Ironworks facility is the first fully preserved plant of its kind in the world, according to Grobe, the site spokesman.

At its peak, the factory produced hundreds of tons of iron daily and employed more than 17,000 people. It was a weighty place, to be sure, and not just for the items the work force produced. In the years leading up to World War II, the plant was one of the largest in the German Reich, and it played an integral role in Germany&#8217;s quest to dominate Europe, Grobe said.

The ironworks emerged from the global conflict relatively unscathed, allowing it to aid in the reconstruction of the region. Eventually, 40 years after the end of the war, the plant was closed when it was determined that an overhaul of the facility would be too expensive. Originally, the plan was to sell the whole works &#8212; stacks, blast furnaces and all &#8212; to China for scrap metal, Grobe said. There was even talk of building a shopping mall on the site. But when the price of steel fell sharply, company and state officials changed course.

The result was a new life for the old plant. In 1994, the V&#246;lklinger H&#252;tte was declared a World Cultural Heritage Site by the U.N. Educational, Scientific and Cultural Organization, more commonly known as UNESCO. About 200,000 people visit the site annually to admire its twisted metal and towering stacks, to see how the old plant created iron and steel, and to walk and climb all over its structure. "The atmosphere is so unique," Grobe said. "Some areas are very ghostly."

The place also includes a science center called the Ferrodrom, where children can learn how earth, fire, water and air worked together in the ironworks. They also can get hands-on exposure to various science disciplines, such as chemistry or physics, and lessons on subjects ranging from how fog is created and why metals rust to how magnetism can be put to use in everyday life.

Additionally, the center hosts temporary cultural exhibits and summer concerts. There is currently a display of historic photos by the Associated Press. The site also has served as background for clothing designers and film and television producers in need of a gritty look.

"For the future," Grobe said, preserving this relic of the past "is more important than a new shopping mall."

On the QTDirections V&#246;lklingen is a short distance northwest of Saarbr&#252;cken. Take Autobahn 6 or 8 to A620 and then to Exit 8, V&#246;lkingen/Geislautern, or Exit 9, V&#246;lkingen. Follow the "Weltkulturerbe" signs to the center. There is a large parking lot at the center.

Costs Admission to the ironworks, Ferrodrom and current exhibits is 12 euros for adults, 10 euros for those qualifying for reduced rates, and 3 euros for children in school groups. A family ticket and annual passes are also available. There are also group rates for guided tours. Entrance on Thursdays is free after 2 p.m. Parking is free.

FoodThere are vending machines, but no cafe at the facility. However, there are plenty of places to eat in V&#246;lkingen and Saarbr&#252;cken.

InformationThe ironworks has a very good Web site, in English, at www.voelklinger-huette.org/en/welcome. Information is also available by calling 06898-9100-100 or e-mailing visit@voelkinger-huette.org.