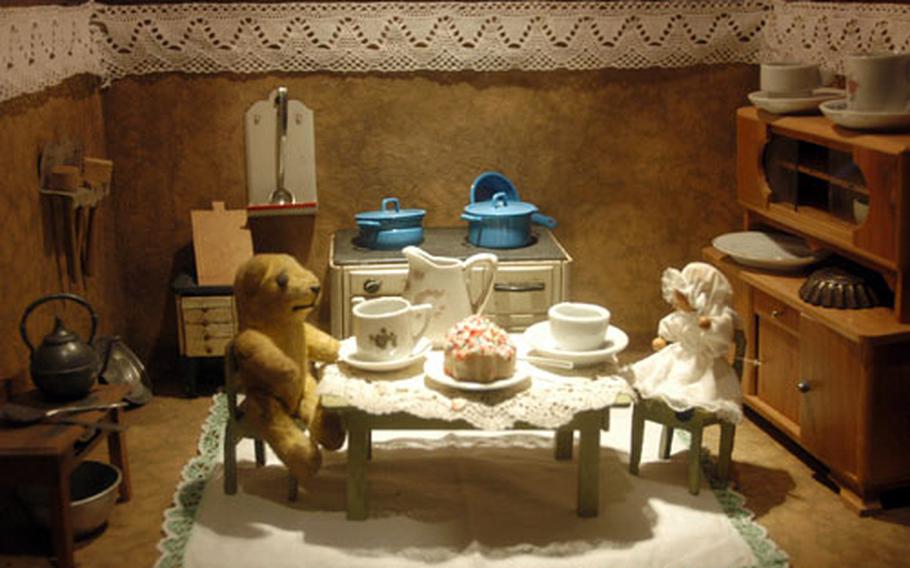 The museum has a model of Little Red Riding Hood (known in Germany as Rotkäppchen, or Little Red Cap) who, in the story, roams the nearby countryside. (Kevin Dougherty / S&S) 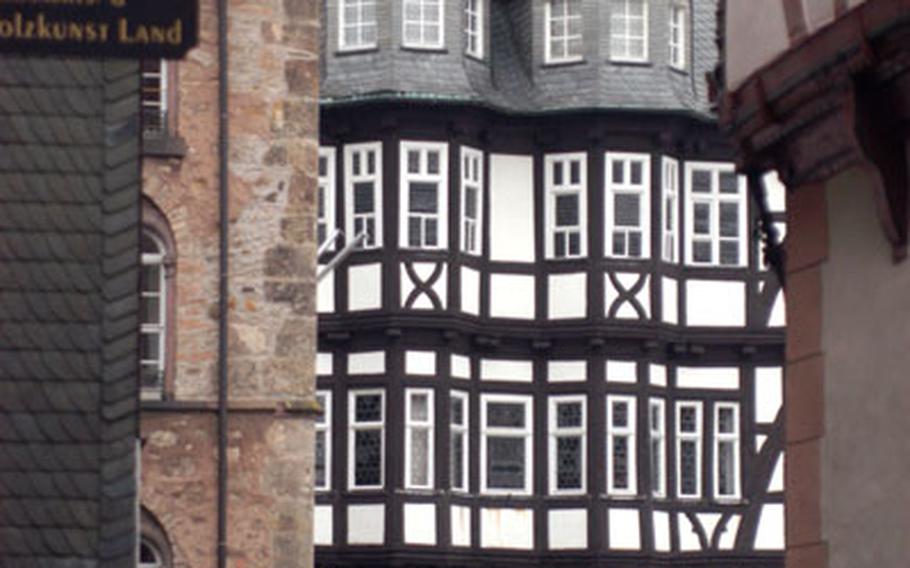 The famous Alsfeld town hall building comes into view as a visitor enters the market place, or old city center, from a side street. (Kevin Dougherty / S&S) The Alsfeld town hall, right, stands next to the Wine House — marked with flags — and a building dating back to 1350 that’s believed to be the oldest in town. (Mecki Snippen / S&S)

Located on a medieval trade route, Alsfeld is graced with a city center that indeed looks as if it was lifted from the pages of a storybook. It&#8217;s a place of character and half- timbered houses that connote early prominence.

Chief among the buildings in the heart of the old town is the Rathaus, or town hall, an unusual structure with stone arcades on the ground floor and graceful turrets on its roof.

Nearby is the Stadtkirche, an early Gothic structure with many of its original wooden furnishings inside. Behind it is a small fountain topped by a girl in local dress holding a goose &#8212; not unlike Little Red Hiding Hood.

The town&#8217;s status peaked in the 15th and 16th centuries before being diminished by war and starvation, plague and plunderers.

Before the war, from 1618 to 1648, Alsfeld had a population of 2,500. When it was over, the population was halved and more than 300 buildings and cottages lay in ruins. (Remarkably, Alsfeld came out of World War II pretty much unscathed.)

But many buildings, including the revered town hall, now nearly 500 years old, survived the Thirty Years&#8217; War. And since the mid-1960s, they have been at the center of a successful restoration.

Alsfeld has more than 400 half-timbered structures, the majority hugging the town center. Given its location just off the central market place, the visitors bureau is a logical place to begin a tour.

The bureau offers material in English, including a map of local historical sights, from a medieval well to the Alsfeld Fairy Tale House to the Wine House, where the remnants of a pillory &#8212; look for the shackle &#8212; still exist. An itinerary lists more than 30 places of interest.

Above the museum is a floor reserved for doll house furnishings. There are 78 miniature showrooms displaying various features of doll houses.

The doll house room displays &#8220;are not just for little girls, but adults, too,&#8221; said Michaela Lippert of the tourism office staff.

On the QT ...Directions: From the Frankfurt area, take A5 northeast for about 65 miles until reaching one of two exits for the town: the Alsfeld-West exit is first; Alsfeld-Ost, or east, is next. The east exit meets B62, which leads into Alsfeld. An Esso station is on the way.

Food: Several restaurants are located near the city square. Local specialties include Kartoffelwurst, wurst made with potatoes; and Salzekuchen, a cake with potatoes.