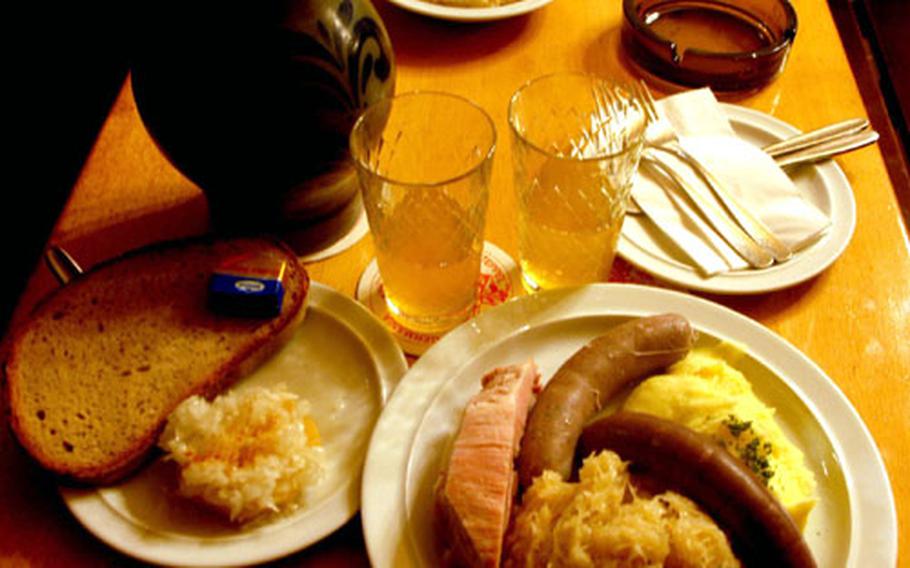 The traditional meal at an apple wine place in Sachsenhausen. From left: bread and cheese with vinegar and onions; a bembel, a gray clay jug with blue decorations that holds two liters of apple wine with two typical apple wine glasses and, at right, a butcher’s plate with blood wurst, liverwurst, sauerkraut and a pork chop. (Peter Jaeger / S&S)

Everyone sits at a wooden table, oblong and glossy, and everyone faces a cylinder of tart cider. The Germans call it apfelwein. The Frankfurters call it their own; they call it &#228;ppelwoi.

In Frankfurt&#8217;s Sachsenhausen district, bustling with pubs and clubs, there still exists a strain of haunt devoted not to the fruit of hops, but to the original forbidden fruit. The apfelwein joints are wooden, the colors all chocolate and golden. Sachsenhausen has 13 traditional &#228;ppelwoi pubs with names such as Germania, Kanonensteppel or &#8220;Gemaltes Haus&#8221; (painted house), with frescoes of chaps in caps hefting glasses skyward. They serve traditional cheese and sauerkraut and sausages. And this time of year they&#8217;ll even cook your goose for you.

Straightaway, Peter strikes up a conversation with Georg Otte, 66. Georg is in windows. His son works for Boeing. And it turns out Georg has been sipping cider in this very place for the past 50 years.

There are a few young people, yes, but a larger number of silver-haired types in vests and jackets. One guy with a wire brush mustache brushes up on the Bild, the tabloid daily renowned for its front-page cleavage. Another gent, who looks about 6-foot-10, walks in and is immediately waved down by throngs of old friends.

This is nice, but I want to know more about the cult of the apple. Peter is eager to educate and we find ourselves just off the big Christmas market and inside the Frankfurter Apfelwein Museum.

The museum is also a restaurant and its displays eagerly relay how today&#8217;s supermarket apples, all sugar and shine, aren&#8217;t up to apfelwein standards. No, the real gems are small, hard and as acidic as a BMW battery. The German cider is much less sweet than its Irish and English cousins. Sometimes Germans even cut it with water or lemonade.

In the old days, whenever those were, gemalten haus regulars had their own deckels, wooden caps adorned with metal seals depicting the logo of a particular bar or town. The museum proudly shows off a case of the discs. A daytime drinker would use his deckel to keep bugs and leaves out of his sour nectar come summer.

Often, the drink is brought to tables in a bembel, a round ceramic jug of five, six, seven, eight, 10, 12 or 20 glasses, painted gray or blue.

This is all very instructive, but there&#8217;s more product to be sampled. So we&#8217;re back outside in Sachsenhausen and its old dormered buildings just across the river, but a world away, from Frankfurt&#8217;s &#8220;Mainhatten&#8221; skyline. We pass a Turkish kebab shop and a Lebanese place and a couple Irish pubs. It takes some looking, but we do indeed find more &#228;ppelwoi.

Sachsenhausen is definitely faster than it was in the days when those men in the frescoes tanked up in the sunshine. Not only are there kebabs and Guinness now, but one apfelwein place even adorns its tables with slick ads for something called Pomp, plugged &#8220;apple seduces grape.&#8221; It&#8217;s apfelwein-plus-sparkling Riesling Sekt, allegedly the drink of the German upper classes way back when.

We leave and find a place that&#8217;s jumping. I have cheese and onions and kraut and Peter goes for blood sausage. We order a bembel that is too big; too much cider for two. Oh well. We&#8217;ll just have to rise to the occasion. Once that mission is complete, we&#8217;re back in Wagner&#8217;s.

Now it&#8217;s evening and elbow-to-elbow. There are several young women here &#8212; at last! Two Japanese men eat what look like pork chops from a prehistoric boar. A German sitting next to us tells us he&#8217;s lived in Paris for 27 years but was born on this very street.

He tells us you really can&#8217;t beat Paris. But all the same, he never forgot about Frankfurt and its forbidden fruit.

Directions: Scattered throughout Frankfurt&#8217;s Sachsenhausen area.Cost: The apfelwein is cheap &#8211; mostly 1.50 euros; a holiday goose with the trimmings is around 100 euros.Food: Think cheese and sausage and sauerkraut.Time: Can vary &#8212; some places are open in the day, some aren&#8217;t. Weekends are the busiest.Info:apfelwein is Germany&#8217;s take on cider. Frankfurt is the mother ship.